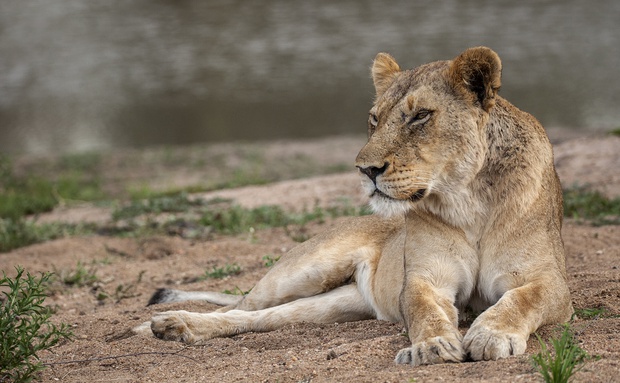 “Travel does what good novelists also do to the life of everyday, placing it like a picture in a frame or a gem in its setting, so that the intrinsic qualities are made more clear. Travel does this with the very stuff that everyday life is made of, giving to it the sharp contour and meaning of art.” – FREYA STARK

FOR THIS MONTHS HIGHLIGHTS BLOG WE ARE GOING TO DO THINGS A LITTLE DIFFERENTLY, ALTHOUGH IT WAS ANOTHER MONTH FILLED WITH INCREDIBLE SIGHTINGS TWO SIGHTINGS REALLY STOOD OUT ABOVE THE REST, IT IS ONLY FITTING THAT WE DEDICATE THIS BLOG TO THEM SO THAT YOU CAN ALSO SHARE IN THE EXPERIENCE THROUGH OUR MINDS EYE.

So get a cup of coffee or a glass of wine and enjoy this special addition of our monthly highlights...

On the afternoon of the 9th we headed out on drive and decided to go and explore the south western sections of our traversing area, this proved to be the right choice as we saw plenty of elephant, buffalo and plenty of general game but then the news broke over the radio that the large male leopard Nstogwaan had been found with a kill and we weren't very far from the area, one can never pass up an opportunity to see this magnificent big cat, with his relaxed demeanor and huge size he is always an awesome sighting to have, so we headed straight to him, on arrival at the sighting the leopard was high up in the branches of a Marula tree peacefully sleeping the heat of the day away, above him his kill was stashed amongst dense leaves of the tree, it was only after some time that we realized what his kill actually was...A rare Aardvark, for all of us this was the first time we had seen a leopard with such a kill although we have heard it happens quite commonly in this area. We patiently waited for the leopard to perhaps shift position, move up to his kill or even just open his eyes for us, but he was having none of it, we then heard that a lone lioness had been found at a nearby waterhole and decided to leave the leopard for the time being and go see the lion and return to the leopard once the day cooled off and hopefully he would be a bit more active. 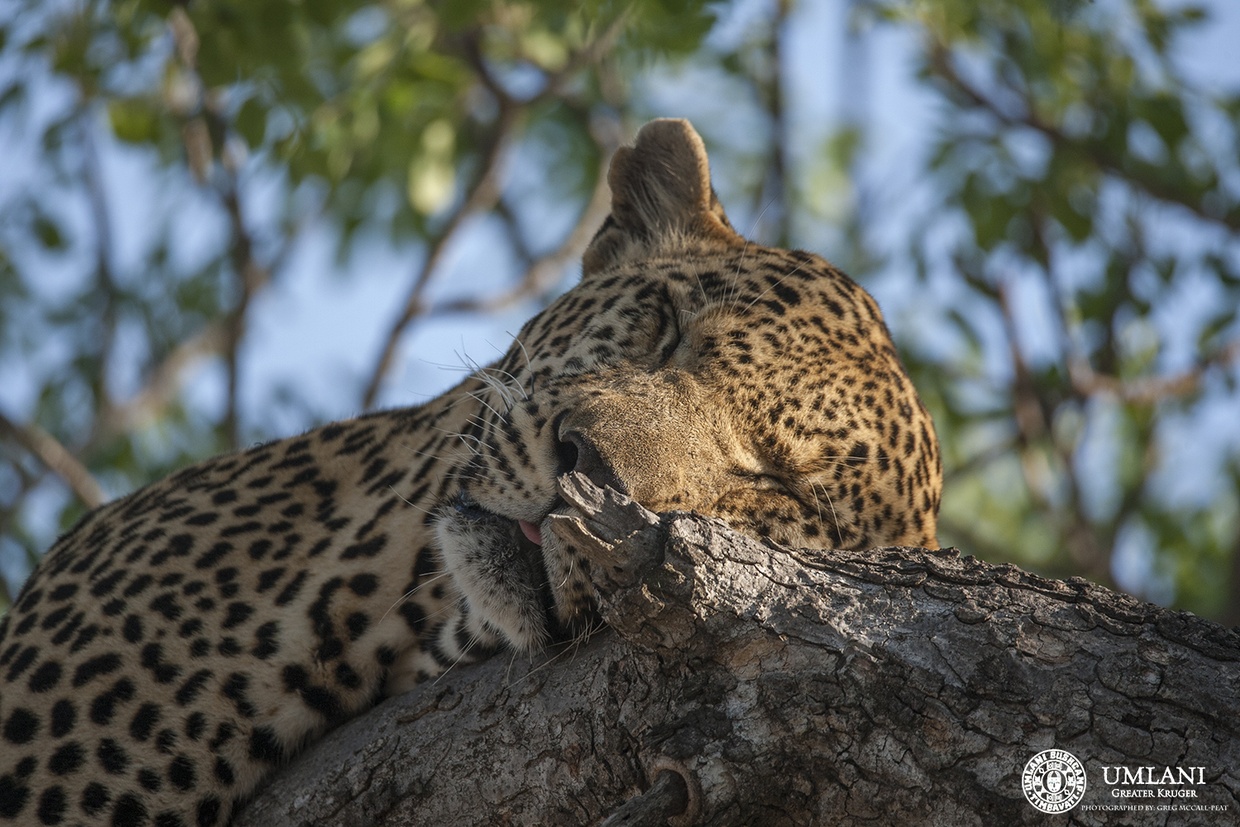 Once we had sat with the lioness for some time and after taking a few pictures of her we left her to her own devices and started to make our way back to the leopard, the sun was nearing the horizon and the temperature had dropped considerably so our thinking was that when we get there he should begin to stir from his slumber, we were right! We parked the car and gazed up at the leopard, who had not moved an inch since we had left him but then he opened his eyes and lifted his head to look up at his kill, the sound of camera shutters filled the air. 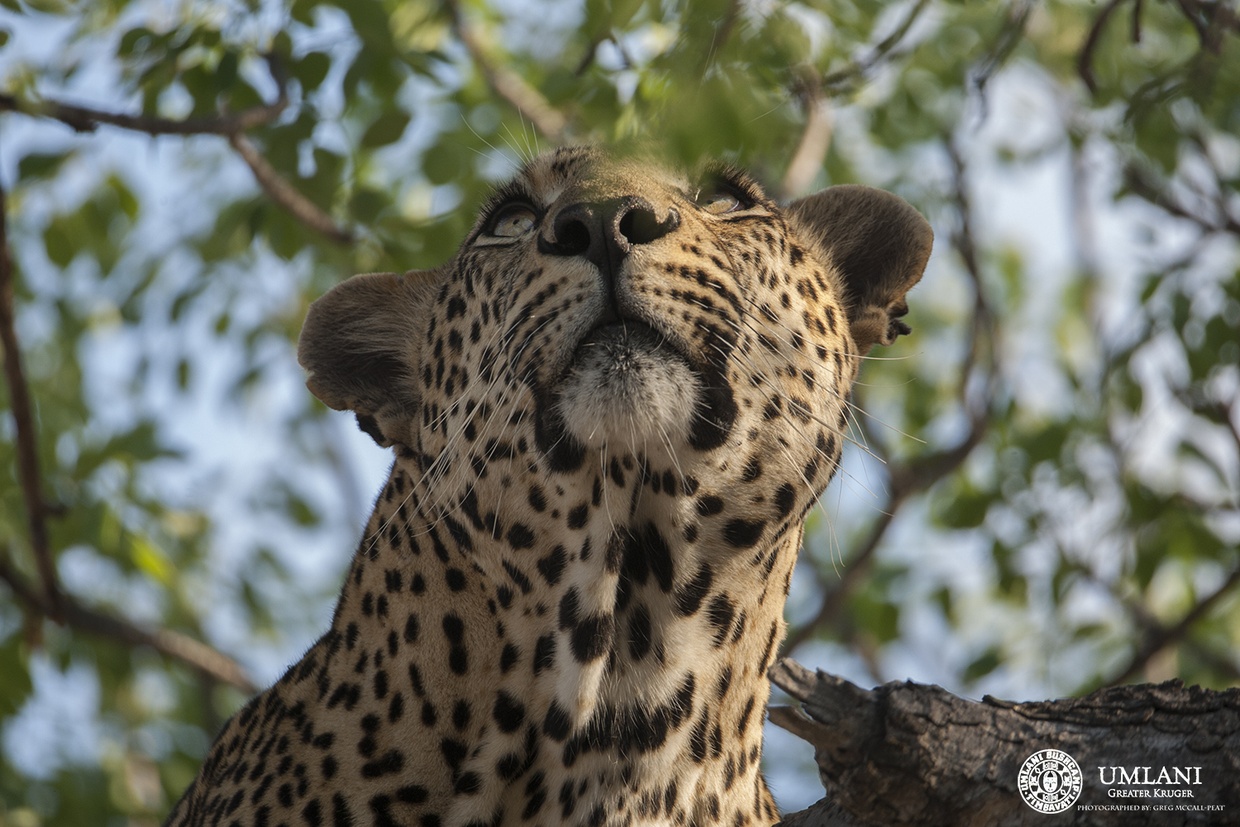 The leopard then got up and head up towards his kill he grabbed it in his jaws and with a bit of treetop acrobatics positioned it to a spot that he would be more comfortable and began to feed. 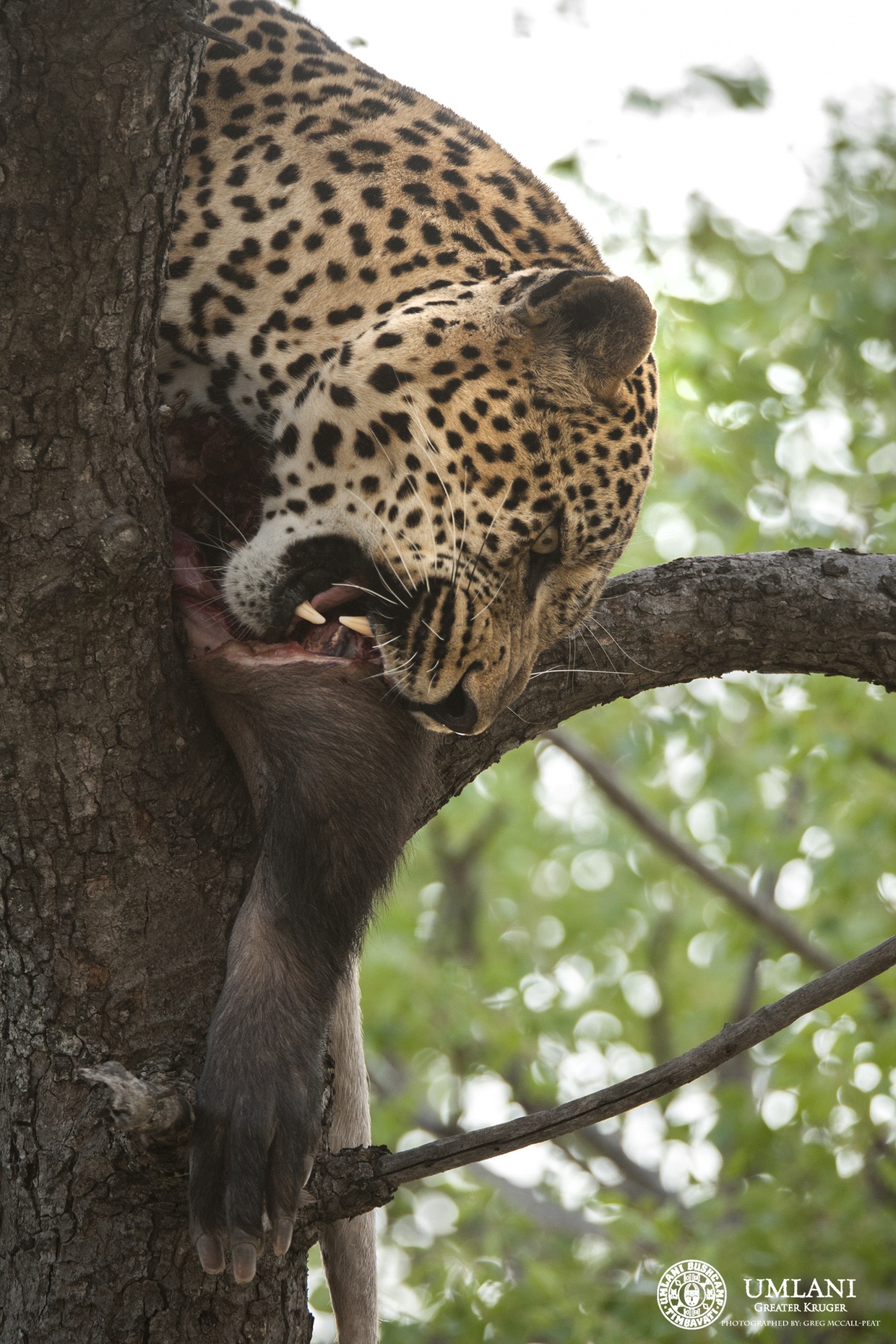 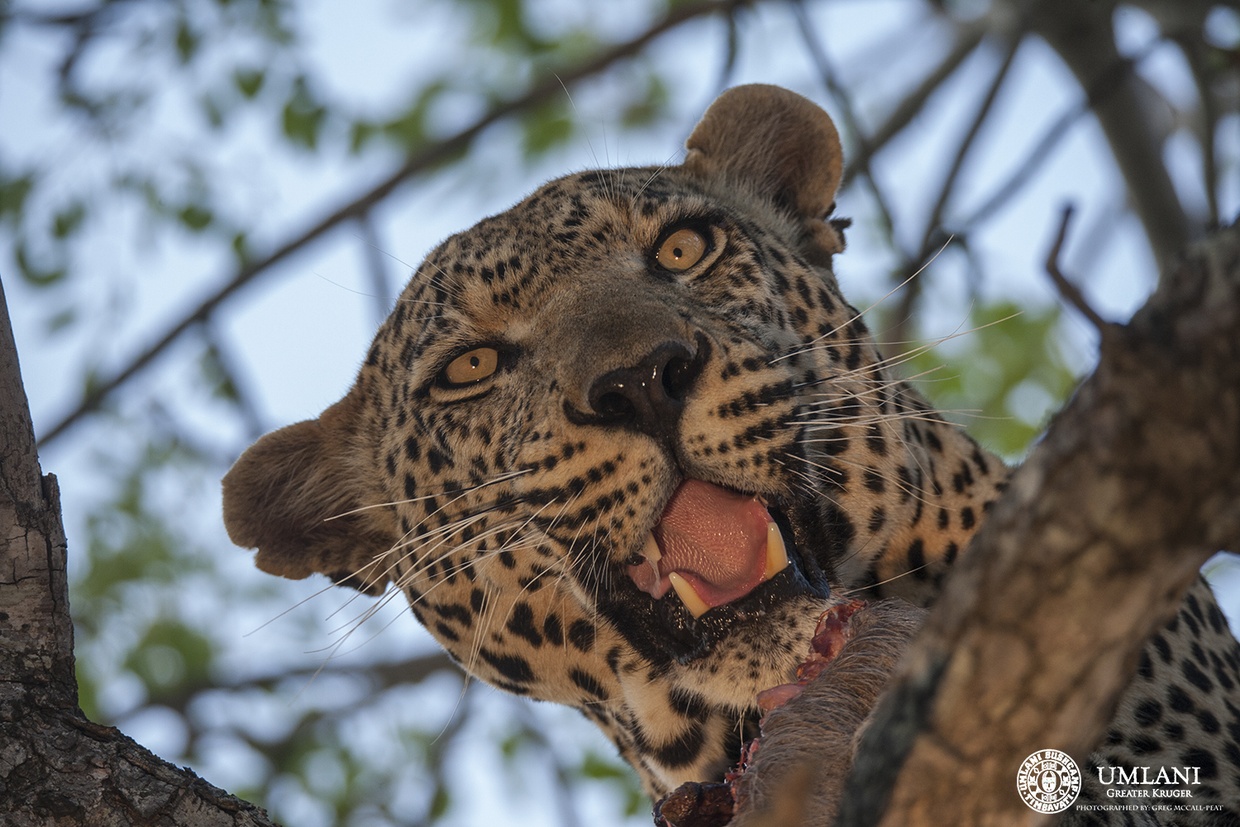 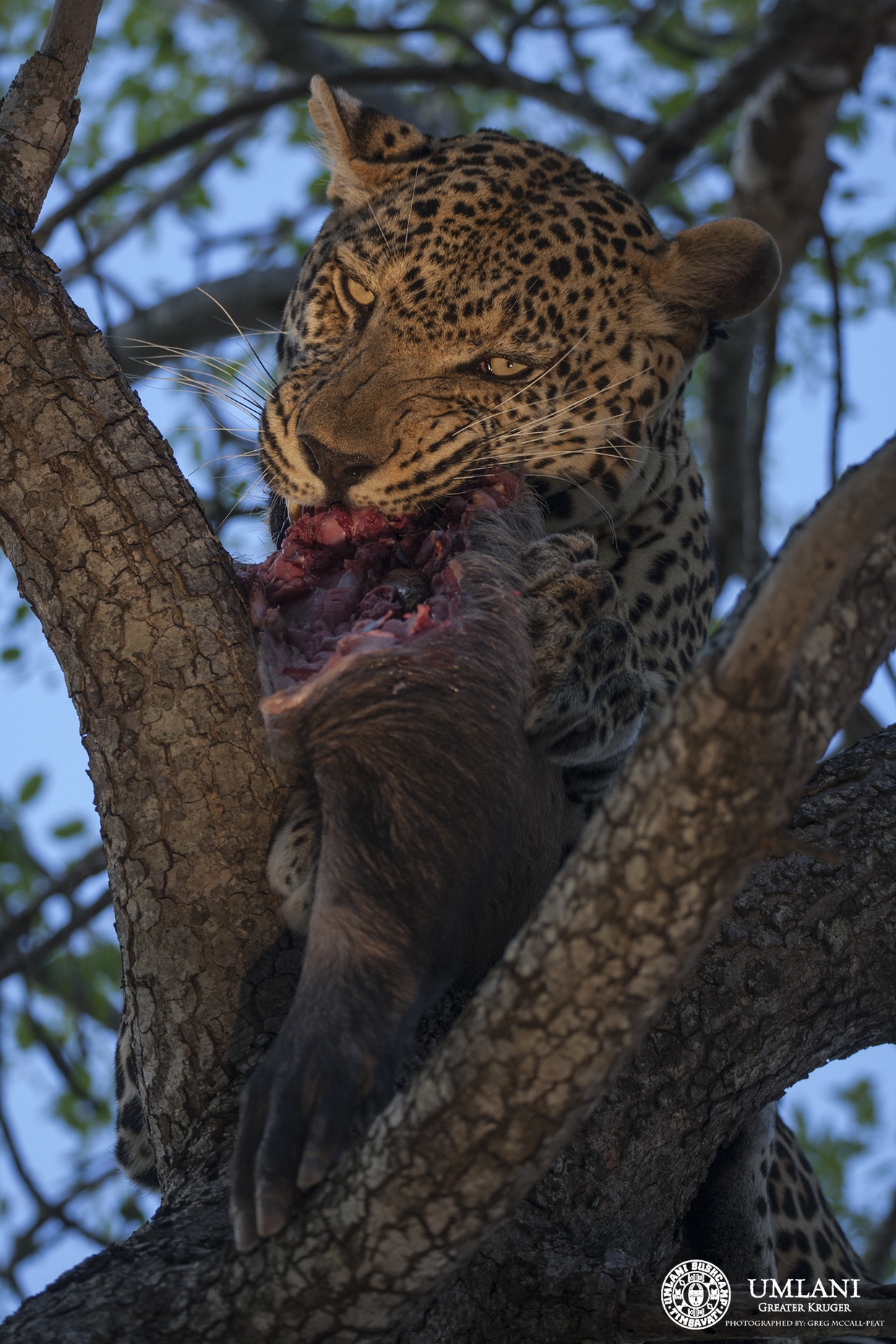 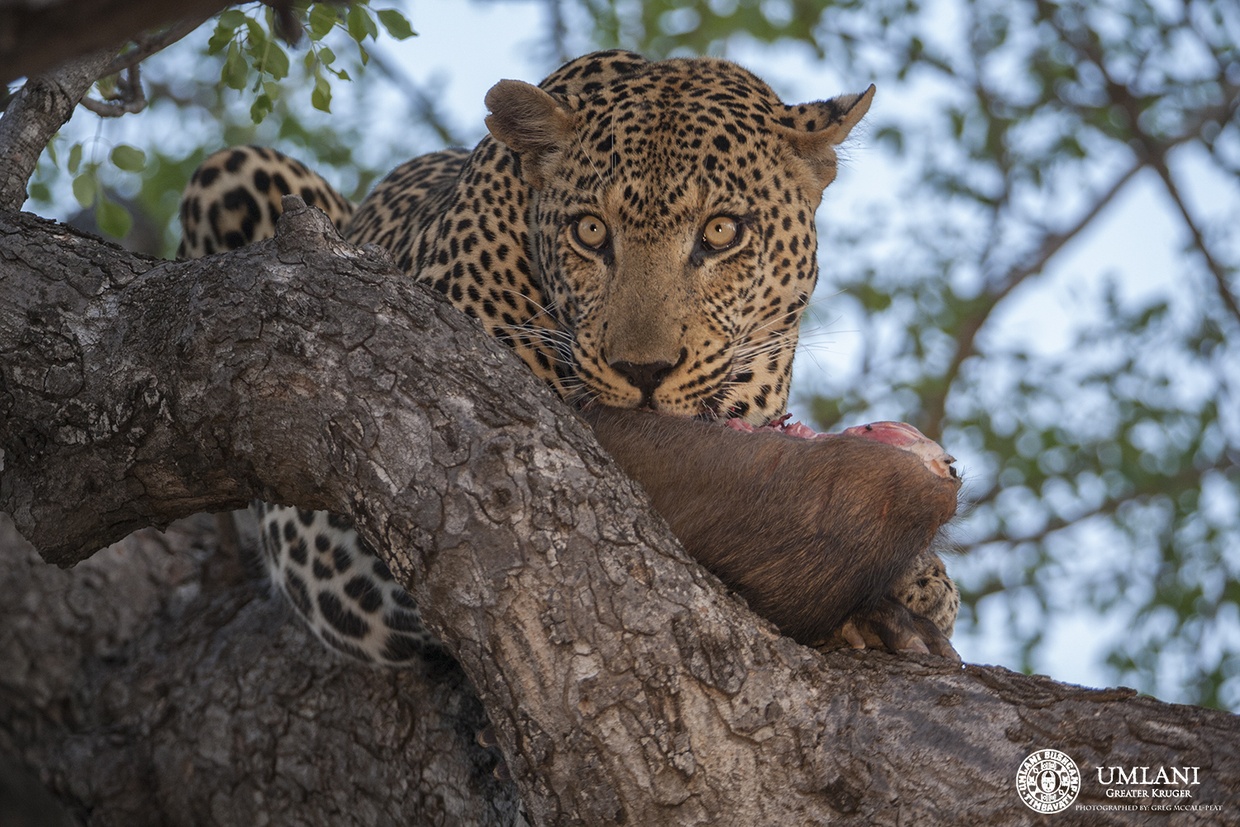 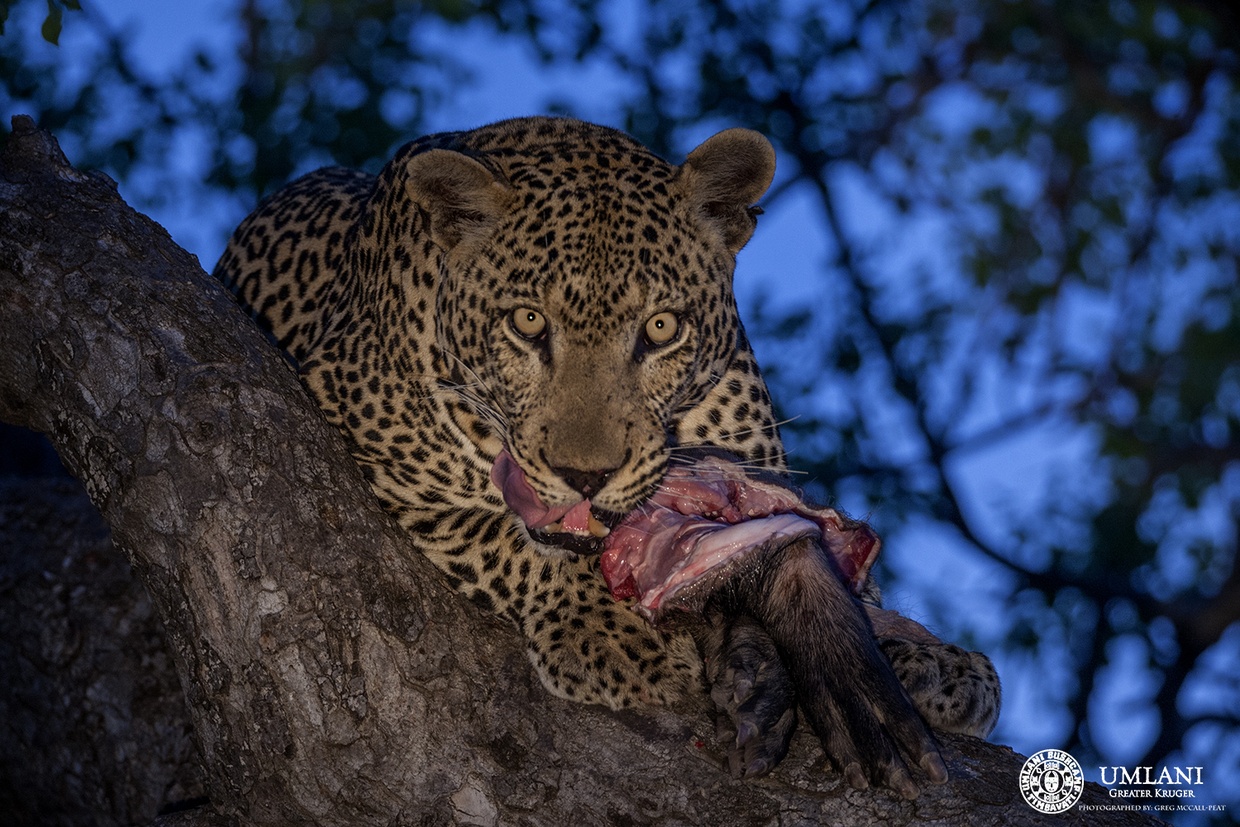 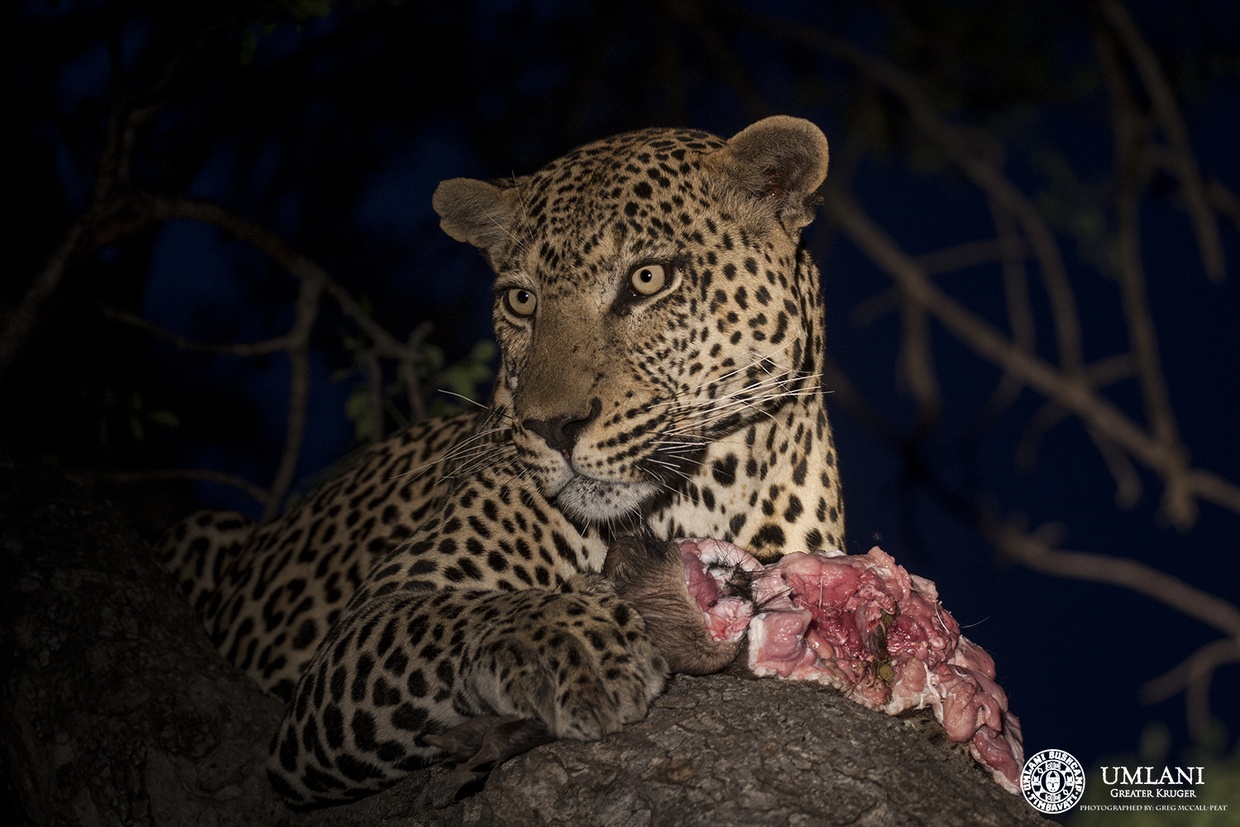 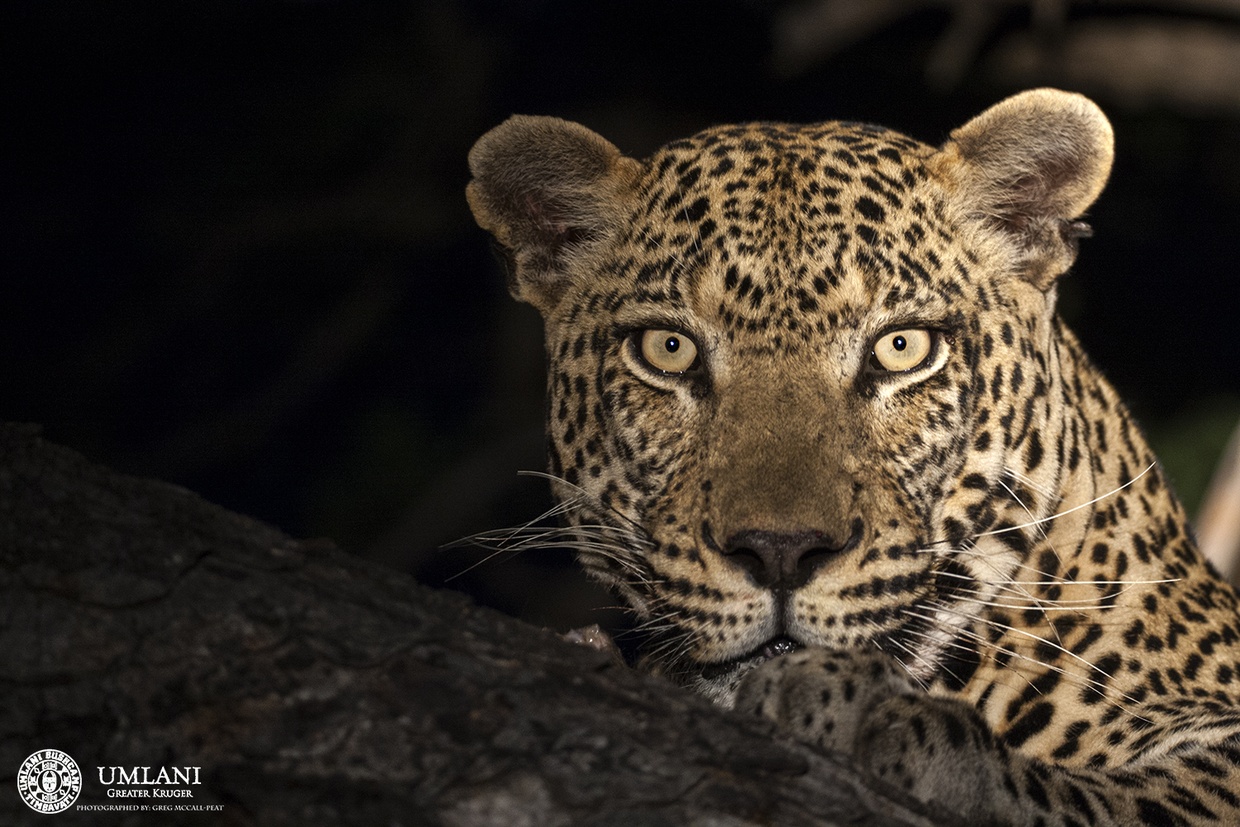 Once darkness had fallen and the leopard had eaten his fill, we decided it would be a good time to call it quits and head back to camp, there was nothing more that we could see that would make the sighting we had just witnessed any better and so we left the leopard to groom himself and we made the journey back for some well deserved dinner of our own.

The second incredible sighting that we had in December happened late on the evening of the 17th, at around 23:30 the frenzied whoops and squeals from excited hyenas coupled with the intense growls of lion broke the silence of the night and rippled through the bush. We all bundled into a vehicle and headed out to investigate the commotion and not after leaving camp we bumped into Rothsay male leopard who was lying watching the hyena/lion action a short distance away, with all the hyena around he didn't hang around for very long and disappeared into the shadows. from our position we could see that the lions had killed a zebra and were trying to fend off the ever growing number of hyenas who seemed to be arriving from all directions, eventually the inevitable happened and the hyenas confidence peeked and that was enough for them to take over the kill. The lionesses didn't go to far and chose to hang around in the hopes that they may be able to retain their hard earned meal from the hyenas. 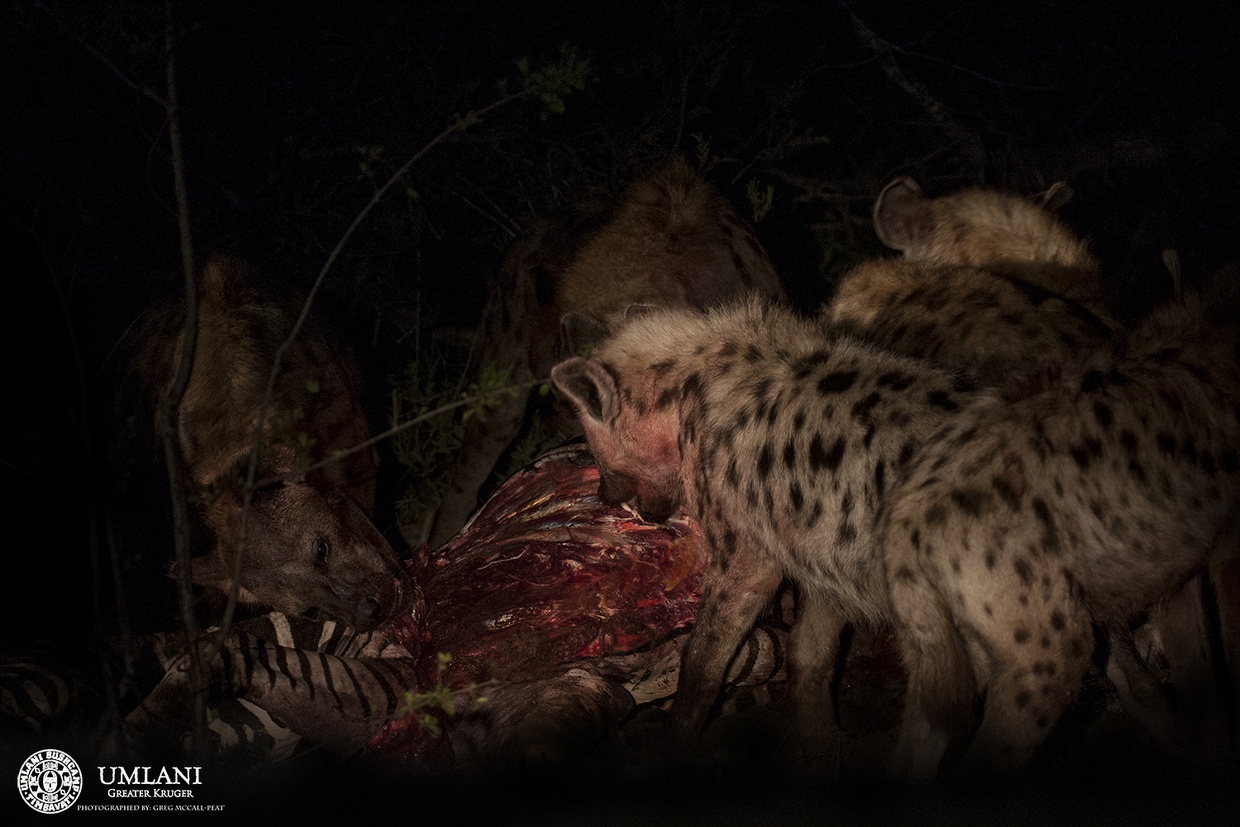 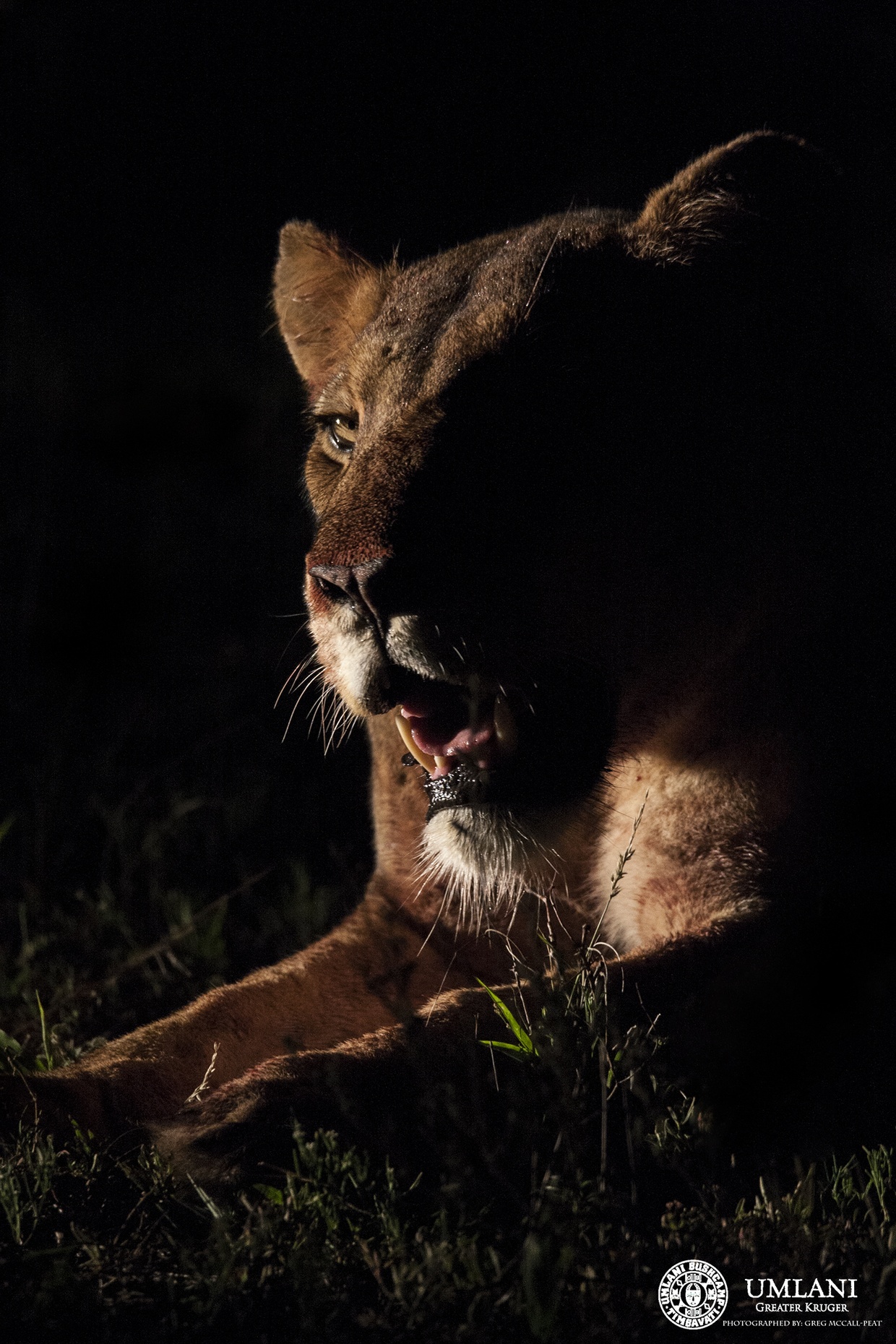 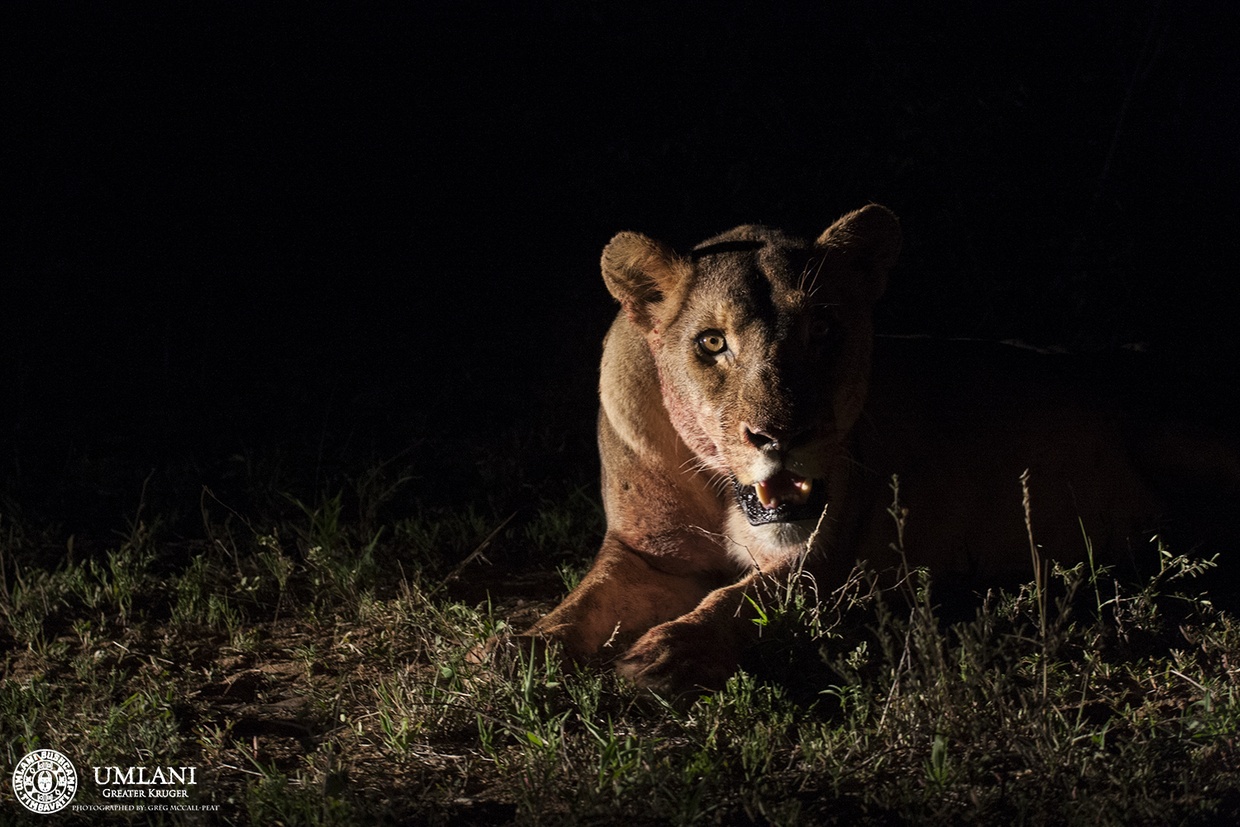 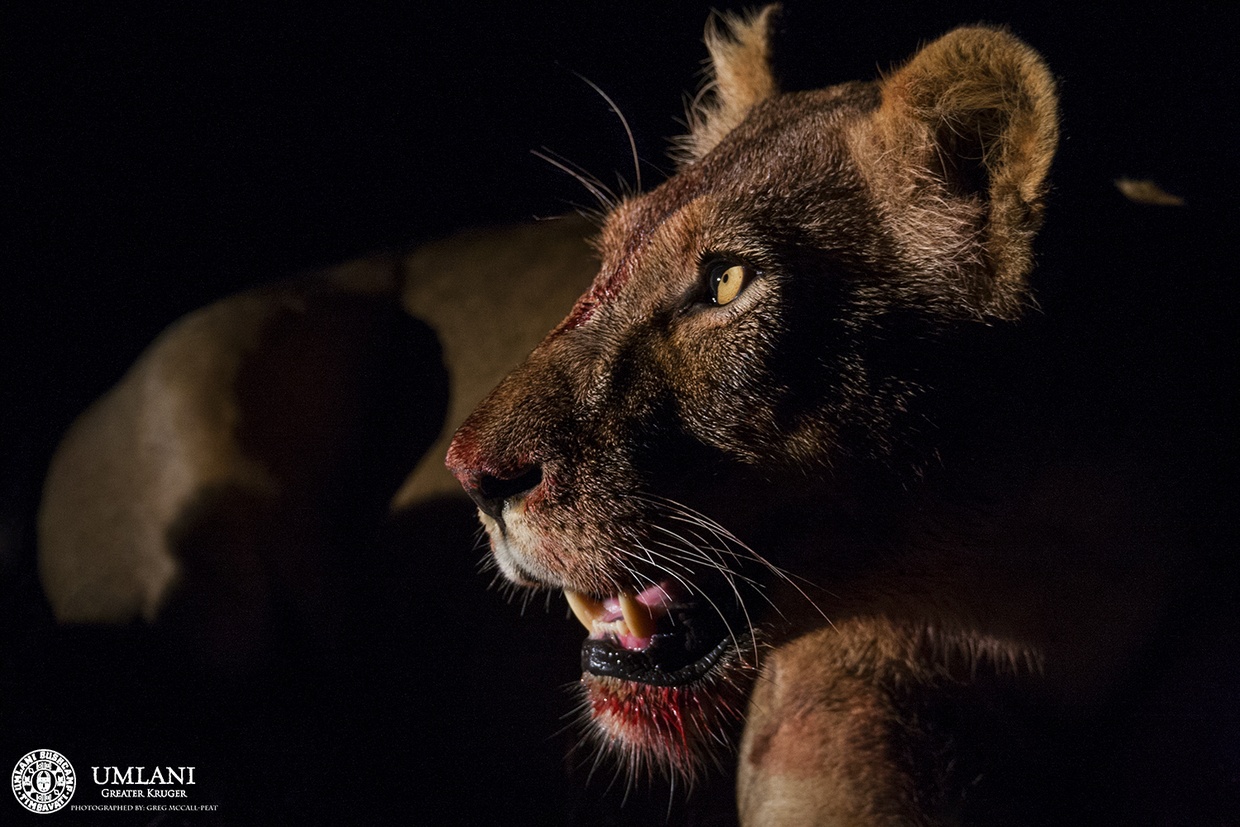 Suddenly there was panic amongst the hyenas and they scattered in every direction, the two lionesses quickly got up and made their way back towards the kill, we drove ahead of them only to find the cause of the panic, the big Sumatra male lion had arrived on the scene and he was taking no nonsense from any hyena, he quickly took ownership of the kill, even keeping the two lionesses from returning to their kill. 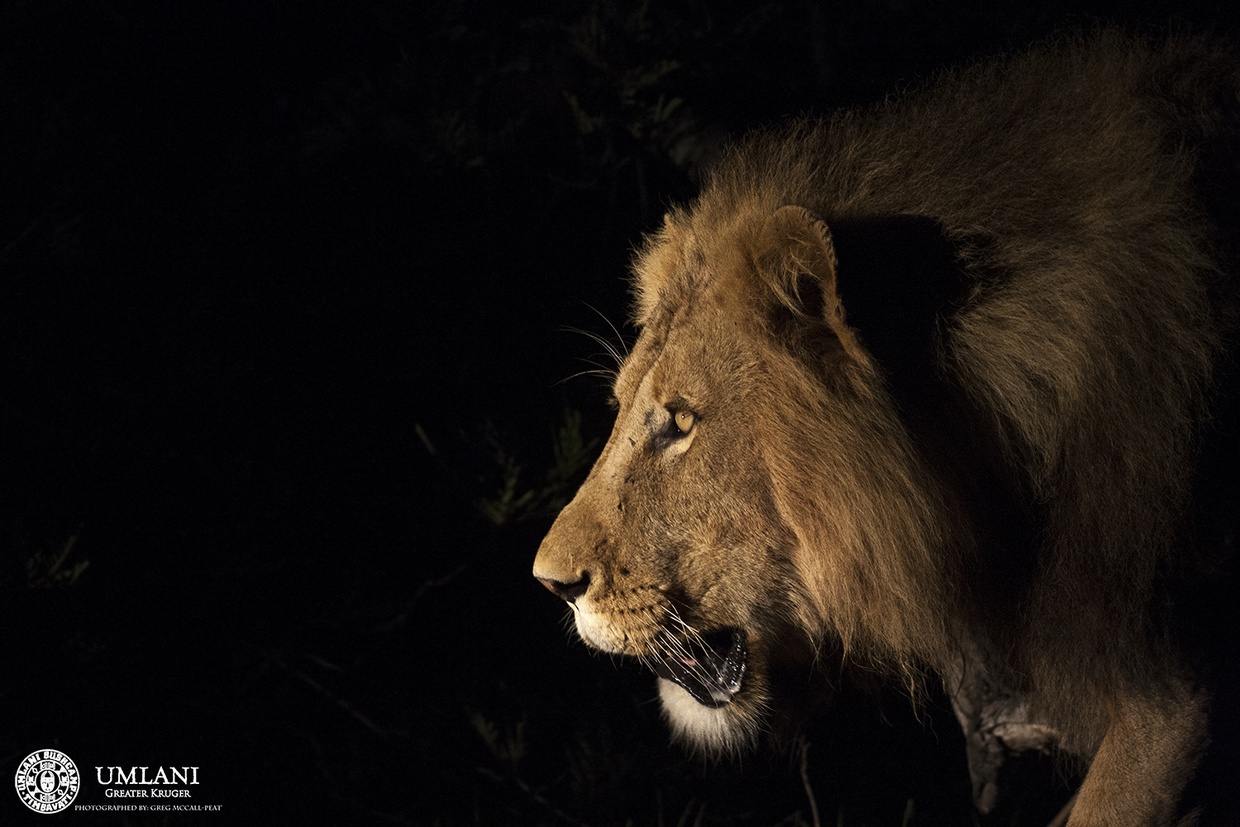 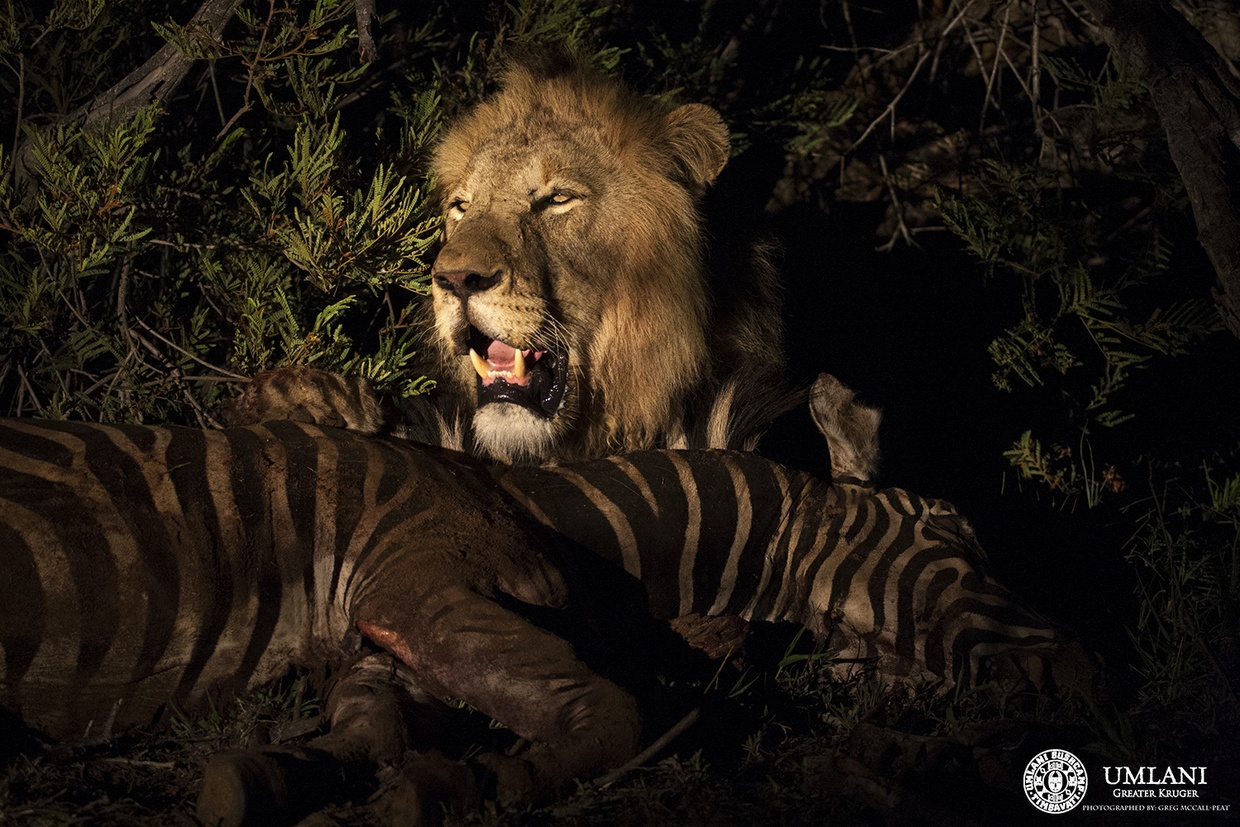 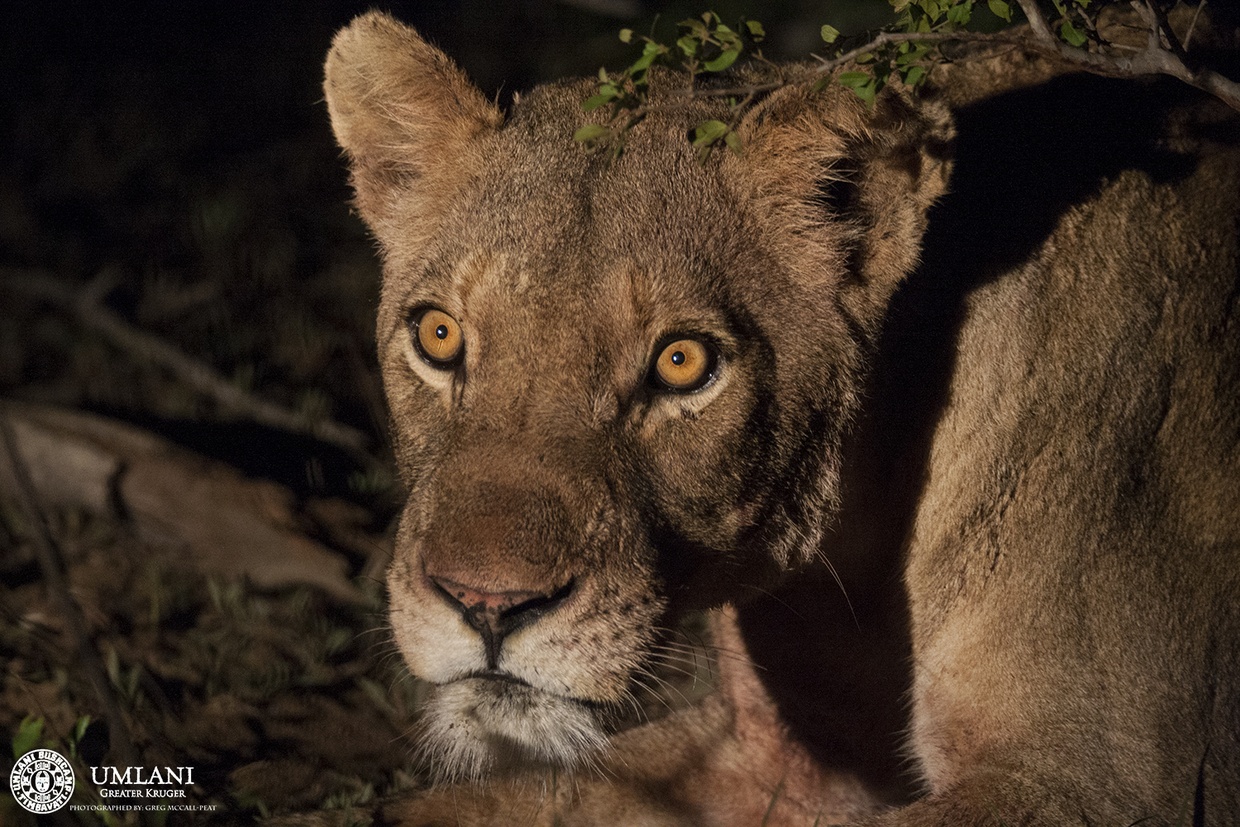 Just when we thought the sighting couldn't get much better, one of the lionesses got up and ran off into the darkness, the reason...the Hercules pride suddenly materialized on the scene obviously drawn by the same sounds that brought us to the sighting. The Sumatra wasn't happy with the young male that was with the pride and quickly lunged at him, giving him a few hard smacks and bites accompanied by deep menacing growls to show who is in charge, the original lioness saw her chance while the male was distracted and ran straight to the kill and began feeding before the large male could have a chance to stop her. Slowly but sure, one by one the other lions joined the feast despite the protests of the Sumatra male. 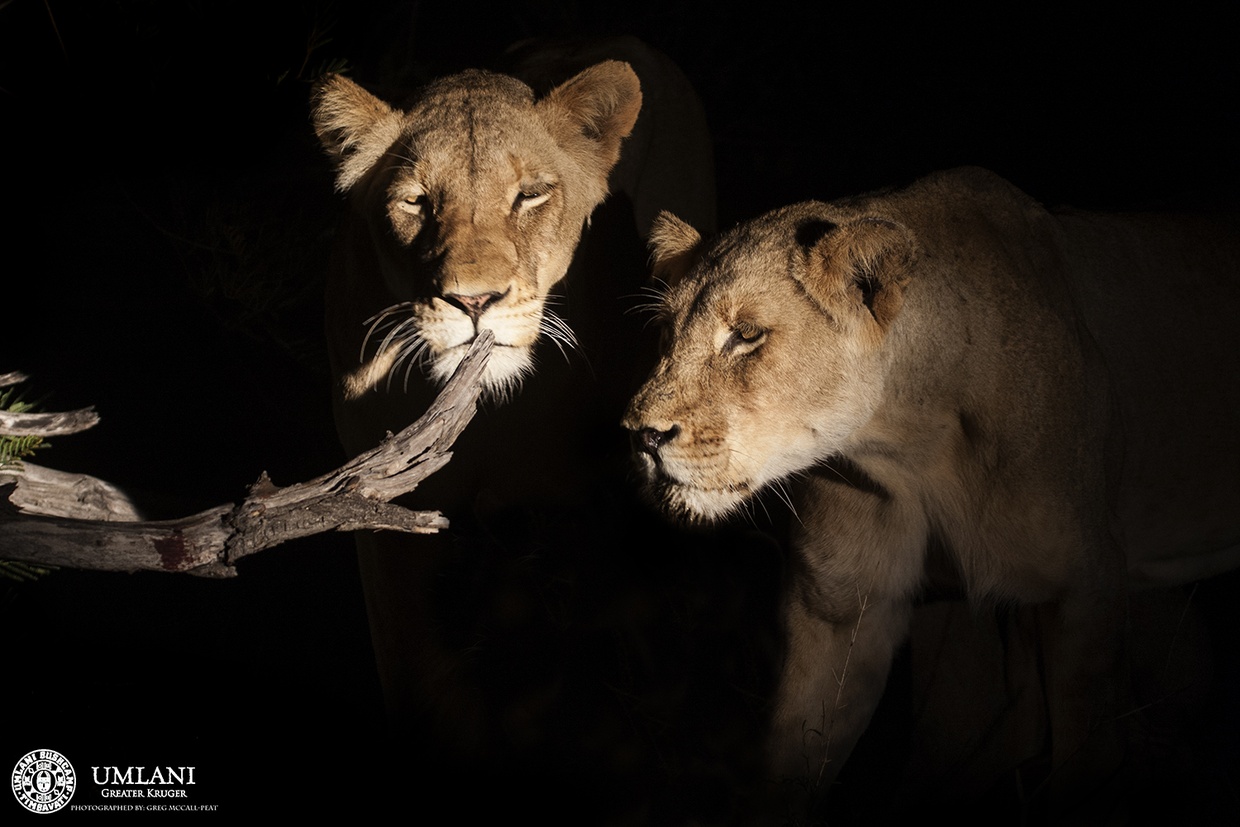 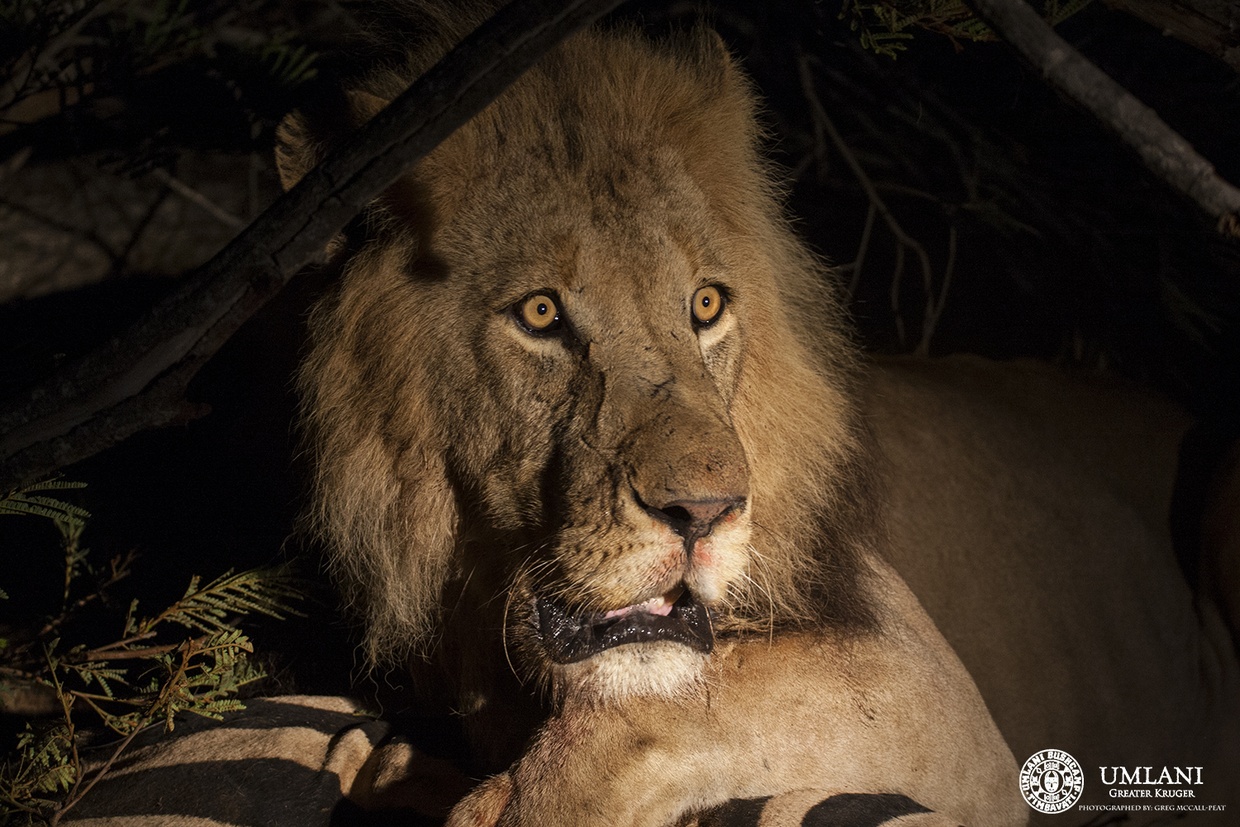 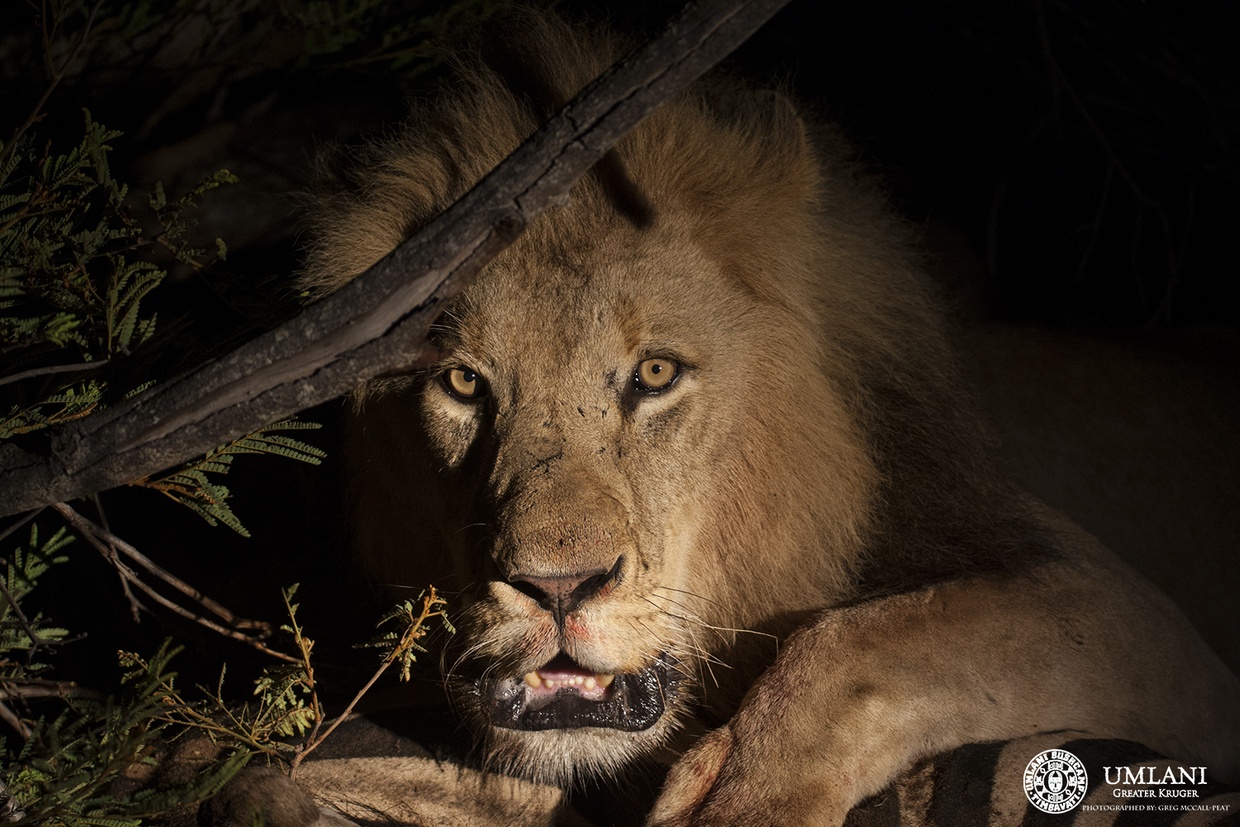 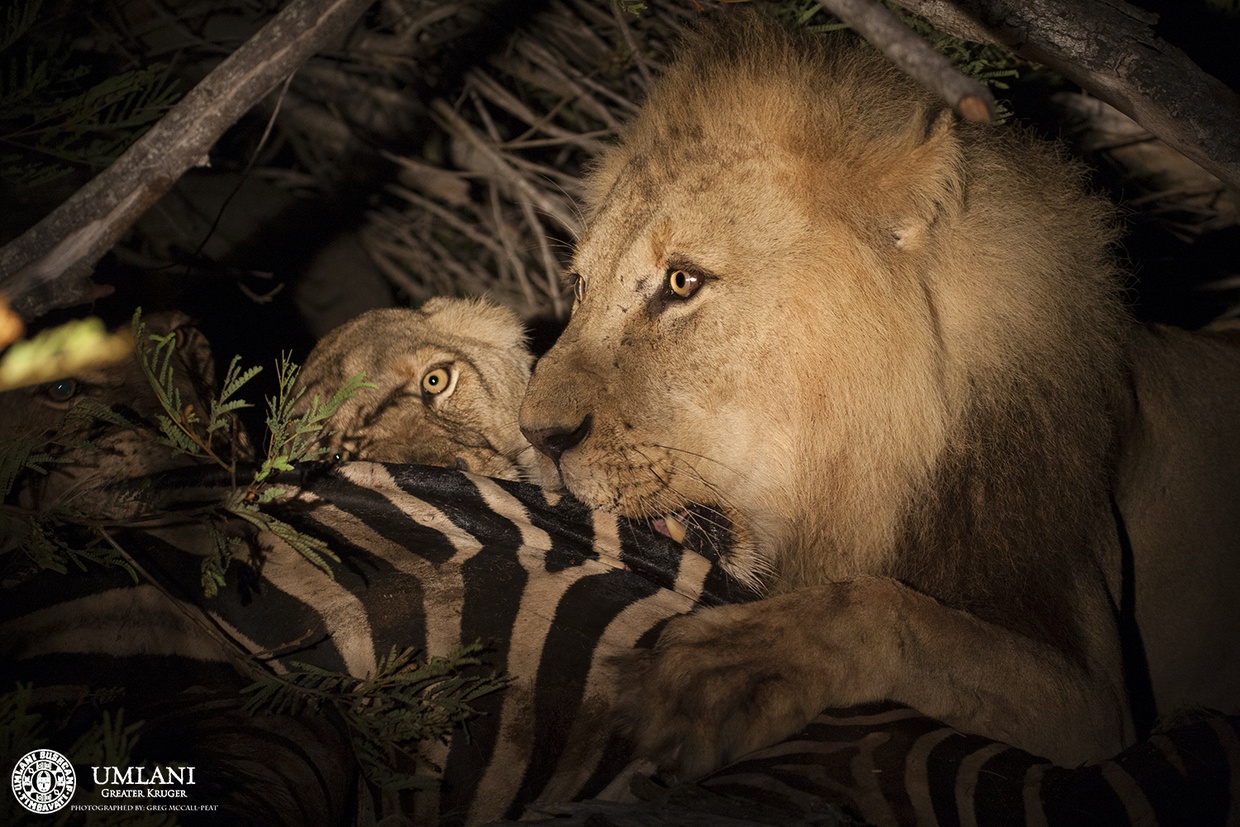 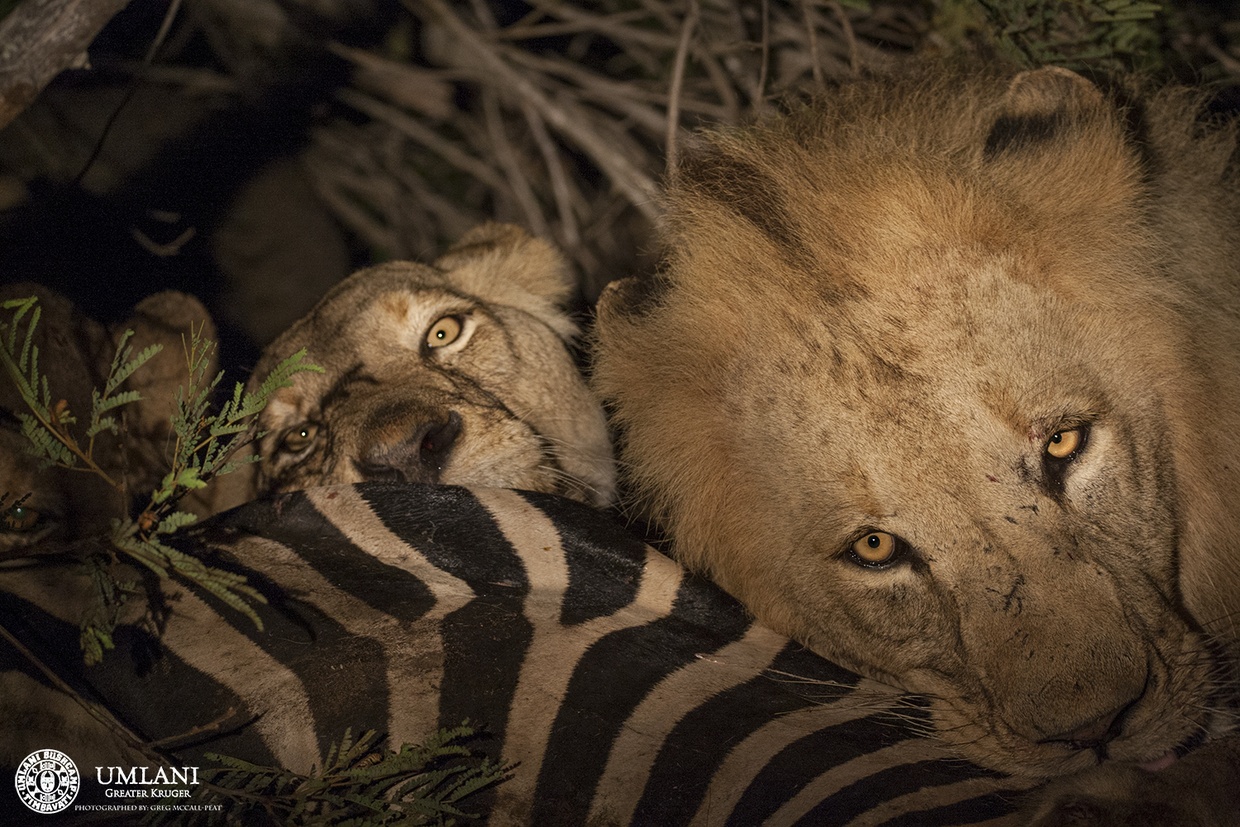 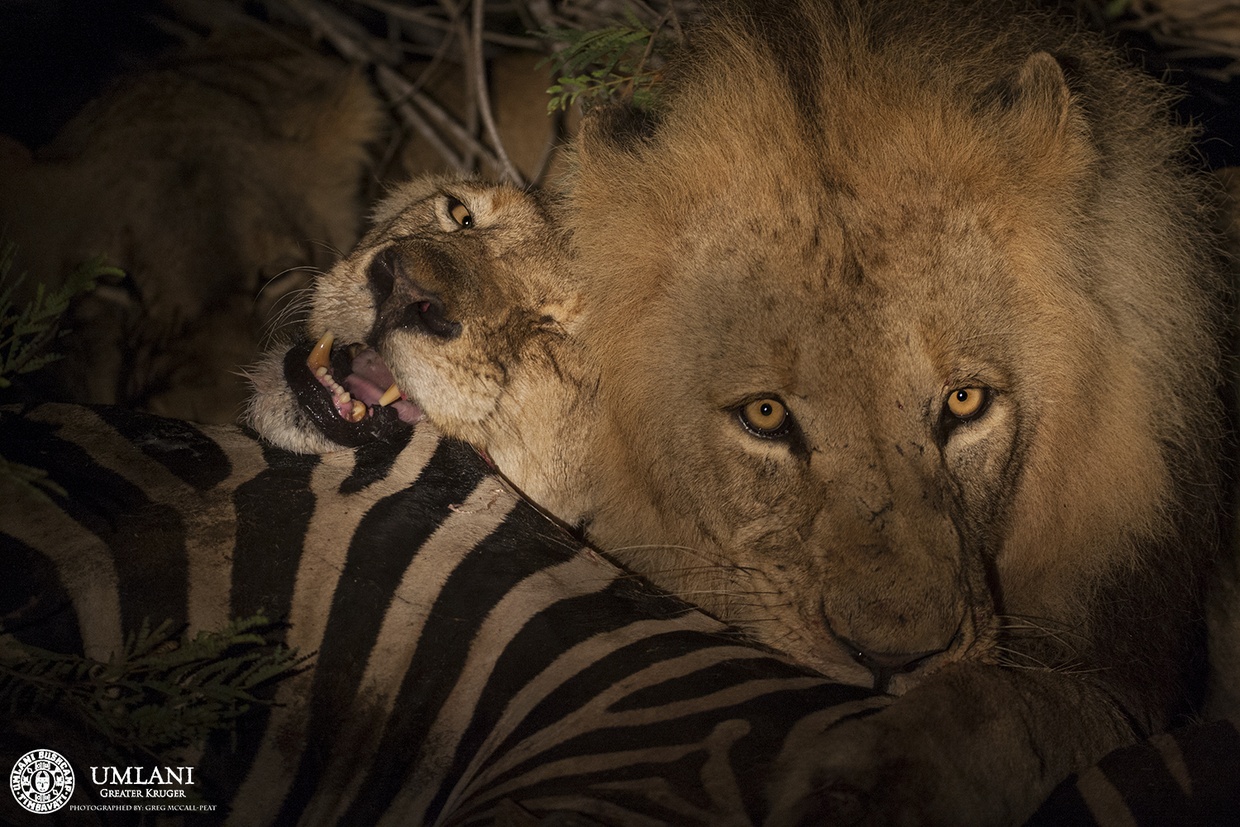 It was soon after this that we realized we had been sitting in the sighting for hours and it was in fact 2:30am, time had flown in the chaos and unbelievable events of the evening and we called it a night...or an early morning would be more appropriate and made the short trip back to camp. for the remainder of the night we could hear the lions squabbling over the remains of the kill and we were left to reflect on the outrageous unpredictability of the bush.

Hopefully you enjoyed this special edition of our monthly highlights...Until next time.