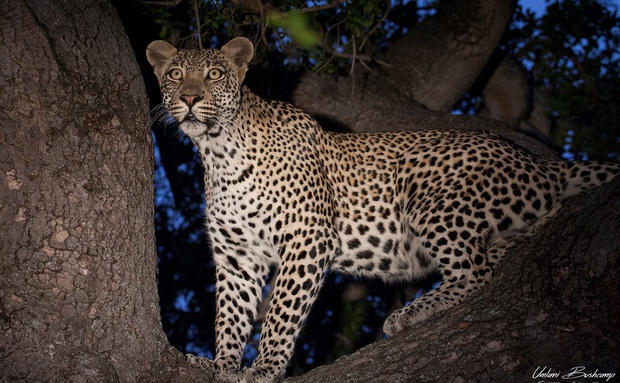 Firmly in the grasp of winter, the bush is looking sparse and animals have been moving far and wide to find food and water.

“…few can sojourn long within the unspoilt wilderness of a game sanctuary, surrounded on all sides by its confiding animals, without absorbing its atmosphere; the Spirit of the Wild is quick to assert supremacy, and no man of any sensibility can resist her.”

It’s a tough time but the predators have been actively taking advantage of this and we have been lucky to see lions and leopard on kills. Wild dogs have also been seen on a regular basis as they are denning north of our traversing area so they often move into our area on hunting forays in order to support their large litter. We are hoping that once they move dens they will settle on our side next.

Enjoy our monthly highlights for July and see what the guests have been fortunate to see.

Dwindling resources have forced this hippo to seek refuge in the only place he can, a drying up mud pool. Here he can at least escape the sun by coating himself in a layer of mud protecting his sensitive skin.

The hyena den is as active as ever. The babysitters seem to have their paws full with all the busy, hyper active little ones running around. The clan is now well over 30 individuals big which isn't common at all. It’s interesting to see what a formidable force this clan actually is as they give all the large carnivores a good run for their money.

Marula's male cub is becoming one of the most frequently seen leopards which mean he has started to relax nicely around the game drive vehicles. He was seen on one occasion with Nyeleti female who didn't seem keen on his advances. She warned him off with a growl and a threatening hiss before moving in the opposite direction. We were also surprised by him one evening whilst sitting with lions that were hunting buffalo. All of a sudden the lions ran into a thicket and treed the young male leopard. It was a close call for him and an awesome sighting for us!

The famous white lions of the Timbavati were also seen a few times this month, which is always a highlight not only for our guests but for us as well. The Giraffe Pride itself is doing extremely well with more small cubs adding to the already large pride.

Marula still isn't showing any signs of being pregnant but our hopes are still high that in the coming months we will be blessed with an introduction to some new little spotted fur balls. We have seen more of Marula this month which is nice as she moves through her territory. Guests have even been lucky enough to see her as they arrive at Umlani and she rests in some of her favourite trees that line our access road to camp.

Elephants are still ever present and it has been amazing to see how in this dry time they have actually played such a vital role in keeping the system going. We often get stuck on how destructive elephants are through their tree pushing habits, but what we have seen is that all the trees that have been pushed down now hold valuable vegetation that has been secretly growing beneath their branches. These now supply all grazers with much needed food.

We have started to see the Hercules Pride more and more on our traversing area over the last month. Hopefully it means that they are making this area home. It would be good to have another established pride around to give us some regular lion sightings. This pride isn't the most relaxed but with us seeing more of them they are slowly but surely adjusting to our presence and we are sure that the sightings of them are only going to improve.

Having the wild dogs in the area and a den nearby means that regular sightings of the most endangered African carnivore happen on a regular basis. As mentioned earlier, hopefully when the dogs move their den they do so in our traversing area so we can get to see even more of them.

A buffalo herd moves into a waterhole to quench their thirst at sunset. It is always an amazing sight and feeling to be amongst a large herd as they move through the bush.

That wraps up another month and as the year flies by we eagerly await to see what August will bring. Until next time...