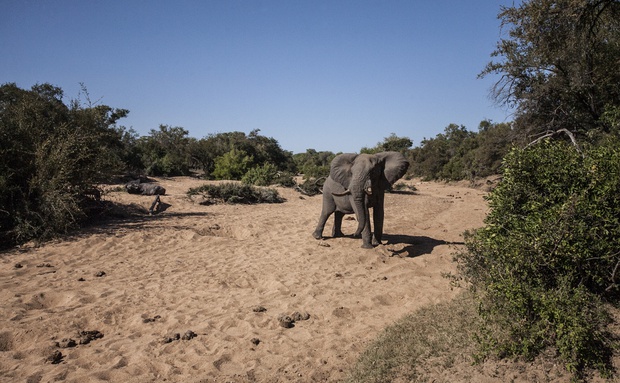 The month of October has come and gone but the early rains that arrived during the month show promise of a good summer season to come.

“To witness that calm rhythm of life revives our worn souls and recaptures a feeling of belonging to the natural world. No one can return from the Serengeti unchanged, for tawny lions will forever prowl our memory and great herds throng our imagination.”

The month of October has come and gone almost without us noticing. One of the major highlights for the month was that we have already received some early rains which is a good sign that we will have a normal summer rainy season. The bush has erupted with life and the trees have transformed from the dull greys to bright green with fresh leaves.

With all the new life the animals have responded and been out in full force giving us another fantastic month of game viewing, enjoy this months highlights captured in photos.

Elephants have remained one of the most viewed species this month. Enjoying all the water that the recent rains have brought, and the abundance of new shoots from the trees, they don't need to move far and are a constant presence out on safari.

The Machaton lioness is still going strong. We hadn't seen much of her and after a long absence she made an appearance and we have been seeing her every couple of days for the last week or so. She truly is a remarkable lioness for making it on her own for so long.

Marula female has been seen a number of times and we are all waiting with baited breath to see if she falls pregnant after mating last month. She continues to gift our guests with some amazing sightings and we often find her on kills. On one occasion, the large male she had been mating with stole one her kills and all she could do was watch from a distance as the male devoured her hard earned meal.

The bird life has been fantastic lately and we are already seeing some of the migratory birds returning. So if you are a birder, now is the time for you to book a trip to Umlani Bushcamp!

One of the major highlights this month was the onset of the first early rains.With the extended drought, both the bush and the animals are in desperate need of the water and the vegetation growth that comes with it. Buffalo in particular have been the hardest hit by the dry conditions and we are not seeing the large herds anymore as they splinter into smaller groups in these tough dry times.

We have been seeing a lot of Nyeleti female. It seems she has settled in the central parts of our traversing area and is now totally independent. She is proving to be a very successful leopard like her mother, Rockfig jr, regularly making kills and defending her turf from other leopards.

It seems the reign of the legendary Trilogy males has come to an end. Over the last few months, with pressure from new coalitions that moved in, their grip on the southern Timbavati began to slip. They had a brutal fight with the two young Ross males which left both Trilogy males beaten and running for the hills. They settled a bit more north until the arrival of 2 more males from a neighbouring reserve, the Mapoza males. One of the Trilogy males was last seen a while back, his wounds not healing and he was in bad condition and we presume he wasn't able to recover and passed away. The lone surviving Trilogy male has since been seen moving far north and out of his former territory, leaving it to the Mapoza males. With the take over brings interesting times and hopefully lion cubs, as the Mapozas have been mating constantly with the last white lioness and the two Ross breakaway females.

That is it for the month of October. Let's hope November brings more rain and even more fantastic sightings and news!