Umlani Lion Update- The Hercules pride and a day to remember 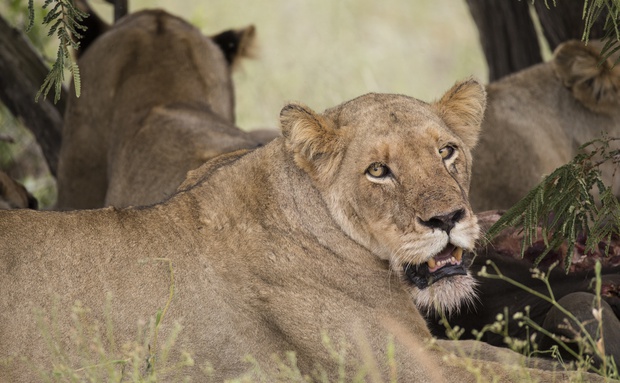 Lately the Hercules pride have been seen a lot on our traversing area, one of the reasons could be that there are new males in the north that pose a threat to the young males of the Hercules pride or perhaps they have picked up on the void left by the Machaton pride and are just making themselves at home. Whatever the case may be, having a lion pride around means that not only do we have more frequent lion sightings but also the quality of lion sightings increases.
This was the case last week when the Hercules pride was found on a fresh buffalo kill.

When Our rangers came back from drive in the morning they informed me of the pride of lions that was located not too far from the camp, so being the enthusiastic bunch of people we are we grabbed the closest game drive vehicle along with our cameras and headed out to go and have a look at the lions.

It was an overcast day so our thinking was the lions would still be a little bit active and perhaps even be feeding on the carcass, so our hopes were high. On arriving at the scene which was clearly marked by the presence of all the vultures we found one of the young male lions sleeping under a bush and about 50m away was the rest of the pride guarding their kill from a couple of Hooded vultures that were sneaking closer and closer in order to try get any morsel they could from the lions pantry.

Whenever the vultures got too close one of the lionesses would shoot them a glare that could only mean she wasn't willing to share and the vultures would be sent scattering in all directions only to start their slow stalk back to the kill a few minutes later.

We spent about an hour with the lions when one young male started to feed on the kill, watching lions feed is always an exhilarating experience as they just don't like to share and the deep guttural growls emitted by them as they squabble over their meal reverberate through the vehicle and into your soul.

After watching the lions feed for a bit we decided to leave them and return that night, perhaps all the lions would be more active and feeding which should present some even better photographic opportunities. As we were leaving the sighting we noticed the other young male approaching his pride, so managed to get a few photos of him as he headed straight towards us, and its always a humbling experience when a lion locks eyes with you while he moves directly at you.

On returning to the scene later that night, we found the pride all on the buffalo kill but surrounded by 30+ hyena. Clearly excited at the prospect of robbing the lions the hyenas whooped and cackled relentlessly as they continually darted in at the big cats from all directions. The battles between lion and hyena are infamous and have been well documented in many wildlife films so to witness it in person is something that words cannot describe, so I have included the link to the video I took of the intense hyena take over.

Amidst the chaos its hard to know where to look as there is action in every direction, at one point one of the lionesses had enough of the constant harassment of the hyenas and foolishly left her pride mates, she had a bad limp and the hyenas quickly picked up on that and turned their attention to the weakened lioness who despite her threatening growls battled to curb the hyenas interest in her, it was then that the rest of the pride apart from one young male who stood his ground guarding the kill,rushed to her side, to see the loyalty of lions in action is amazing. The hyenas then turned their attention back to the kill and the no singled out young male this proved too much for the young lion who quickly gave way to the wave of hyenas swarming around him.

The pride decided that discretion was the better part of valor and moved off from the kill site, but that wasn't enough for some of the hyenas who continued to pursue and harass the lions as they ran into the darkness, making absolutely sure that the big cats wouldn't return.

We decided to follow the pride and caught up with them as they found a small seasonal pan to quench their thirst before reassuring bonds among each other after the intensity of what had just happened. It was an almost magical moment as they reflected in the water and peace and quiet was restored to the African night only the distant whoops and giggles of the hyenas a reminder of what had just happened. Not wanting to anthropomorphize here but we could almost see the relief of the pride that they made it out of the battle as they rubbed heads and collapsed on one another and began grooming, almost as if to wash off the events of that night.

We left the pride as they began to cross our North western boundary and disappeared into the darkness, leaving us with another memory that will be etched into the minds and memories of all who witnessed this incredible sighting.

I often sit and reflect on some of the sights that I have seen in my time working in the bush and I am always amazed at how nature always finds a way to keep you on the edge of your seat, it fuels the passion of anyone who plays witness to natures mastery and keeps you coming back for more, and one thing is for sure this won't be the last incredible sighting and we look forward to many more intimate views into the lives of the animals that call this piece of paradise home.

Written and Photographed by: Greg McCall-Peat