An Afternoon Of Leopard Luck 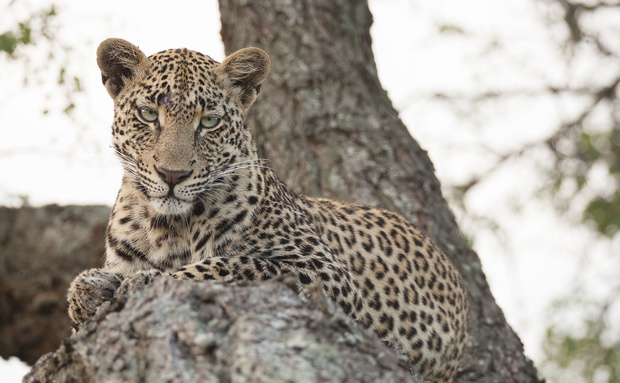 WE RECENTLY HAD SOME RETURN GUESTS WHO HAVE BEEN IN CONTACT WITH ME WITH A REQUEST, TO SEE LEOPARD. NOT AN UNCOMMON REQUEST AS LEOPARDS ARE OFTEN ON THE VERY TOP OF THE LIST OF THINGS TO SEE. BUT THIS REQUEST WAS DIFFERENT, I HAD AN EXTREMELY GOOD RUN WITH SEEING LEOPARDS AND MY CONFIDENCE HAD BEEN SKY HIGH IN MY COMMUNICATION TO THE GUESTS. I MAY HAVE EVEN PROMISED THEM A LEOPARD, SO WITH THAT BEING SAID THE GUESTS ARRIVED AND IMMEDIATELY REMINDED ME OF MY PROMISE THAT I HAD MADE, THE CATCH I ONLY HAD ONE DRIVE TO DO IT IN.

I quickly met with the other guides at camp and asked them for an update on any leopard sightings from the morning, their response was not one I wanted to hear. there had been no leopard sightings for the last few days and to make it worse there were not even any signs of leopards around. Panic began to set in, but I put on a brave face and when game drive time arrived we set off in search of the elusive leopard. My plan was to head to our north eastern section of our traversing, an area that is known to have the highest concentration of leopards and would give us our best chance. as we snaked through the dense riverine sections associated with leopards alert for any sign of a leopard I couldn't help but feel we had to find one, but as we kept on driving there literally was nothing, we saw many other species of animals but it was as if all our leopards had disappeared. To make things worse the joking comments started to flow from the back of the vehicle and time was starting to tick by, I was feeling the pressure. 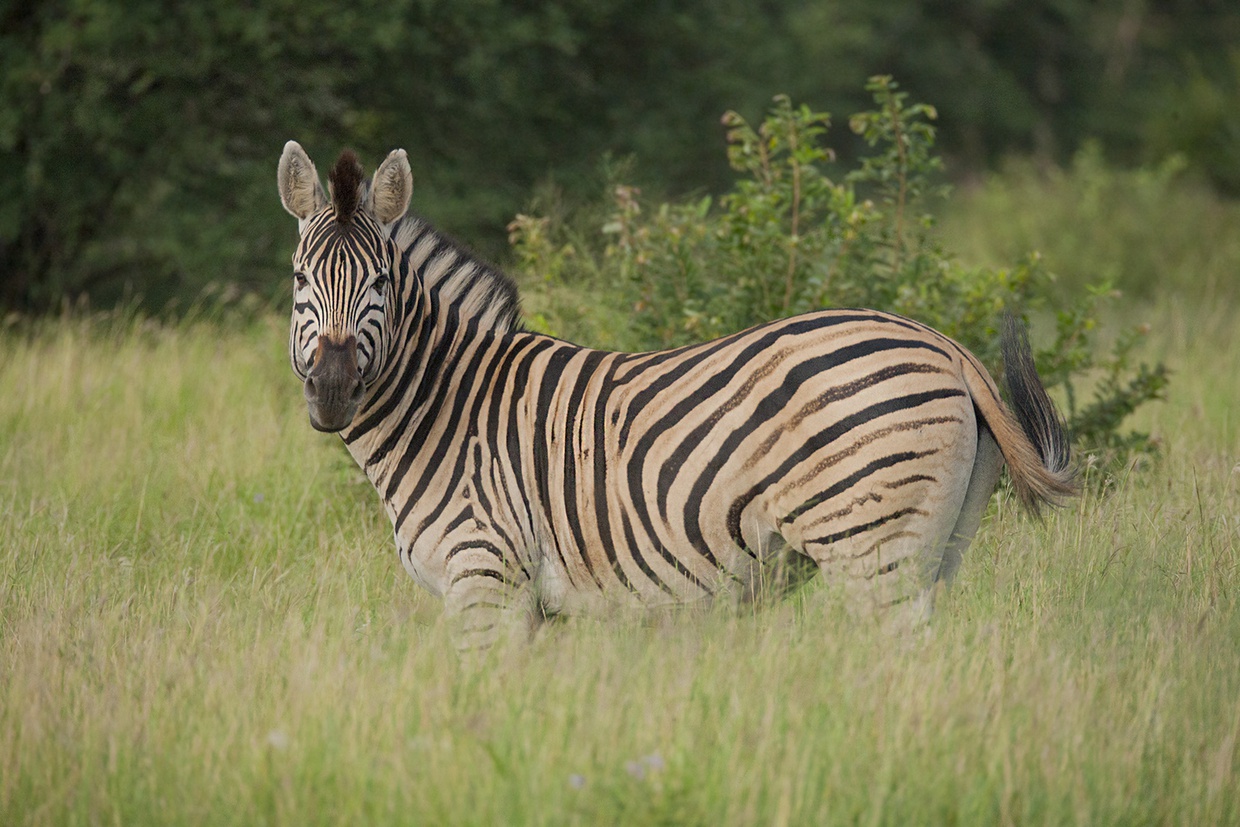 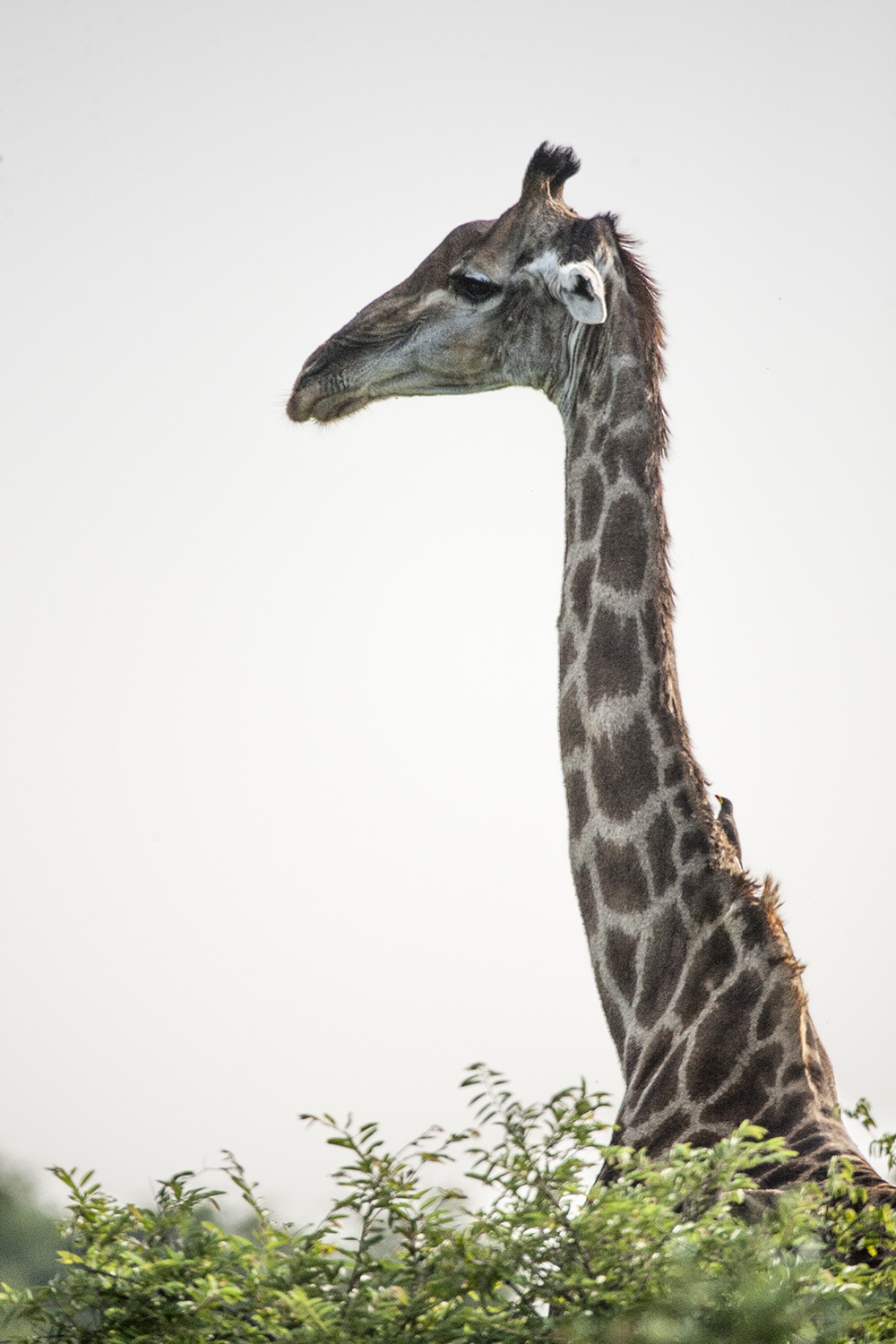 We had driven all the way up on to our Northern boundary road when there is was a sign that a leopard had been there in the form of its dung. I quickly hopped out of the vehicle to take a closer and it was very very fresh, the leopard had just been there. The sandy road was extremely hard and I could only make out one track from the leopard it looked like it had walked off the road and down towards a small drainage line about 30m off the road, I walked down to have a look for tracks in the soft sand but there were none. I walked back up onto the road and found a soft patch of sand and saw the tracks heading straight down the road, I quickly got back to the vehicle and started following the tracks from the vehicle as they headed down the road, the tracks were so clear I could still see the marks in the sand from the leopards hairs on its paws. My only hope now was that it either still be on the road and if not that it crossed to the southern side as being on the boundary if the leopard moved north there would be no hope for us.

Then, as we rounded a corner, in the last rays of afternoon light, there it was in the road ahead of us a beautiful female leopard, she quickly moved off the road to the north but sat down in the long grass and watched us approach, I immediately recognized her as N'weti female, the daughter of Nyeleti. She is a stunning leopard with blue eyes just like her mother and one of our very relaxed individuals. As I turned the vehicle off she got up and moved back out into the open, crossed the road and went up into a huge fallen Knobthorn tree where she lay down and began grooming herself and putting on a fantastic show for all of us. I looked back at the guests who had huge smiles on their faces, the joking had stopped and comments of " You delivered"and "You stuck to your promise" started up. Whilst relief washed over me, I too took in the incredible sight of the big cat lounging on the horizontal trunk of the tree, always in awe of these beautiful predators. 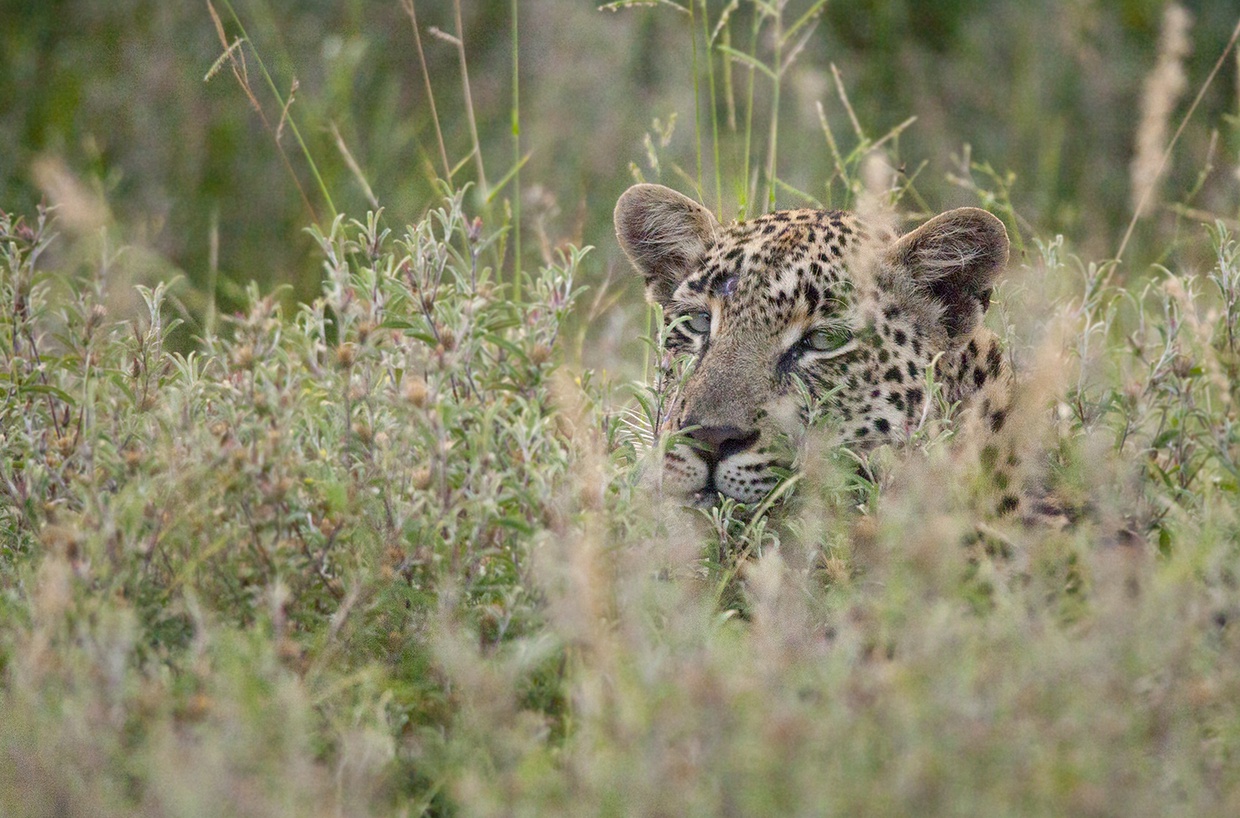 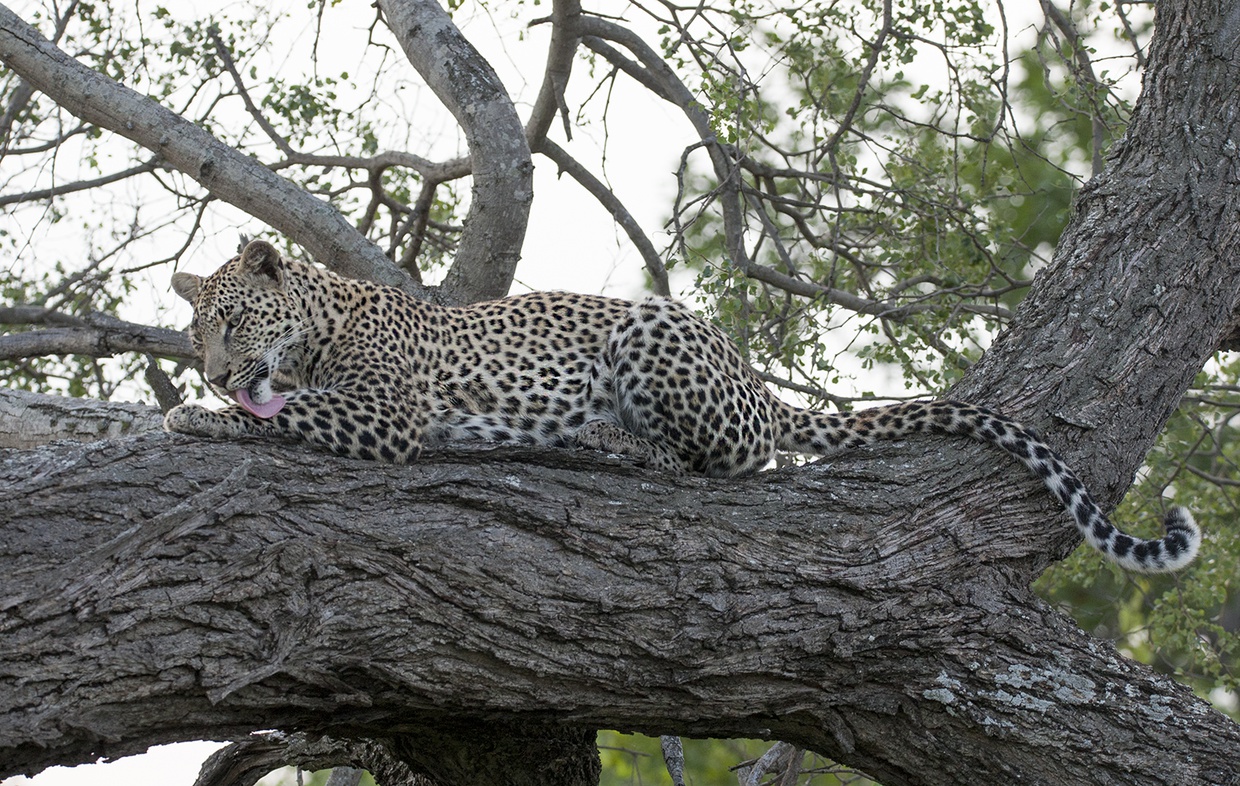 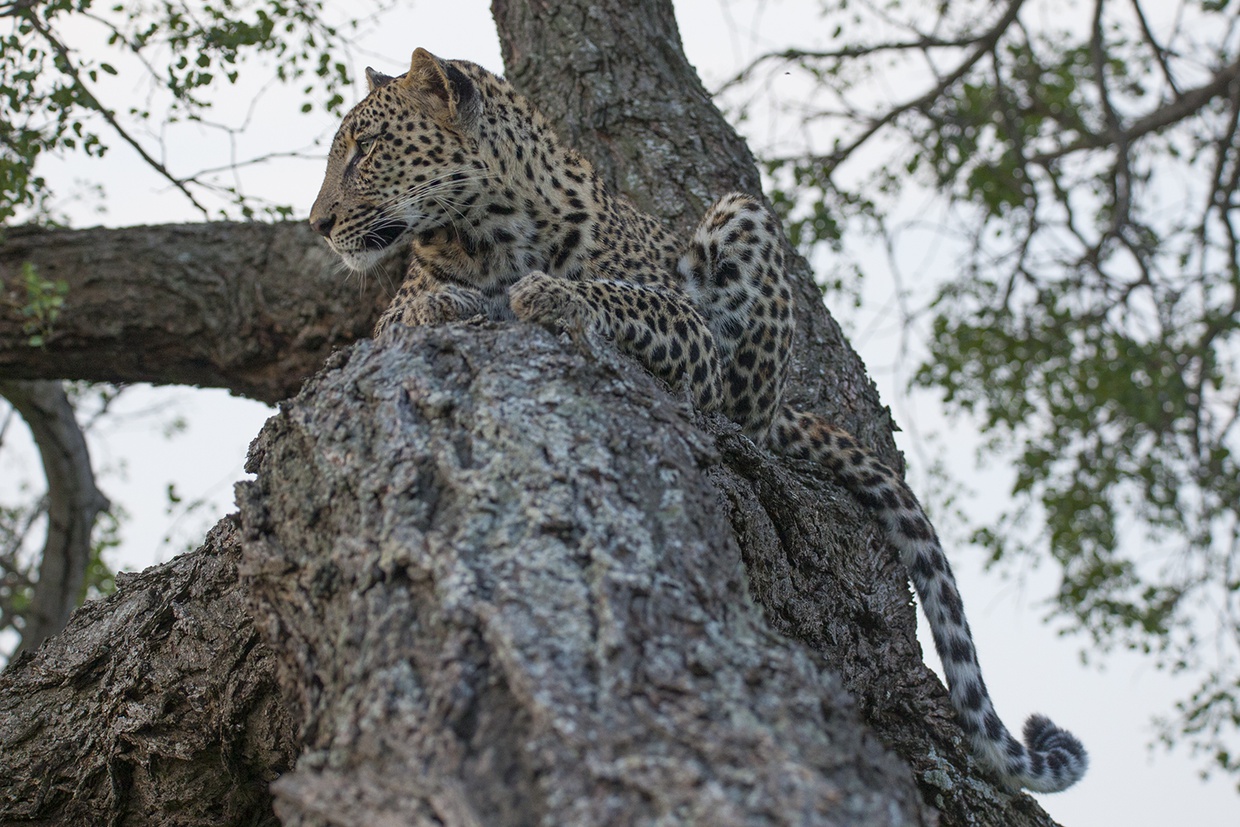 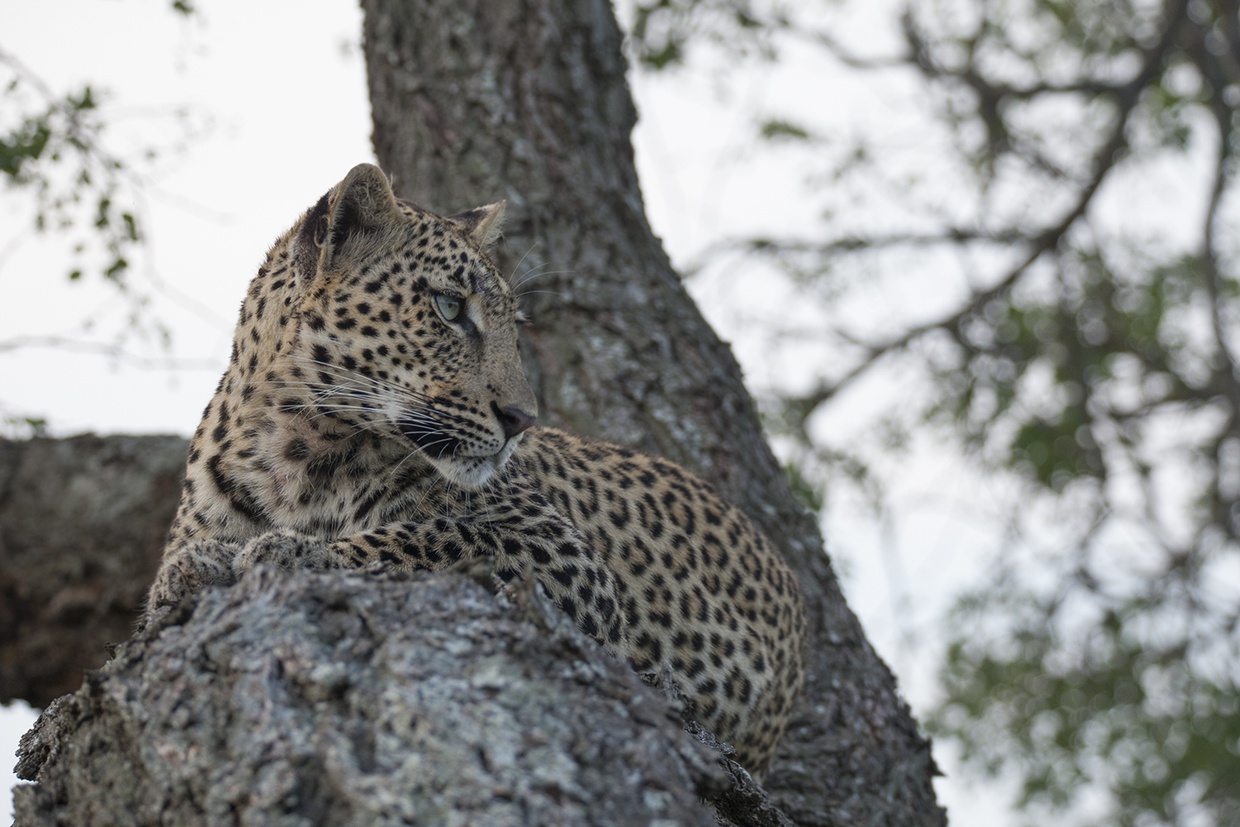 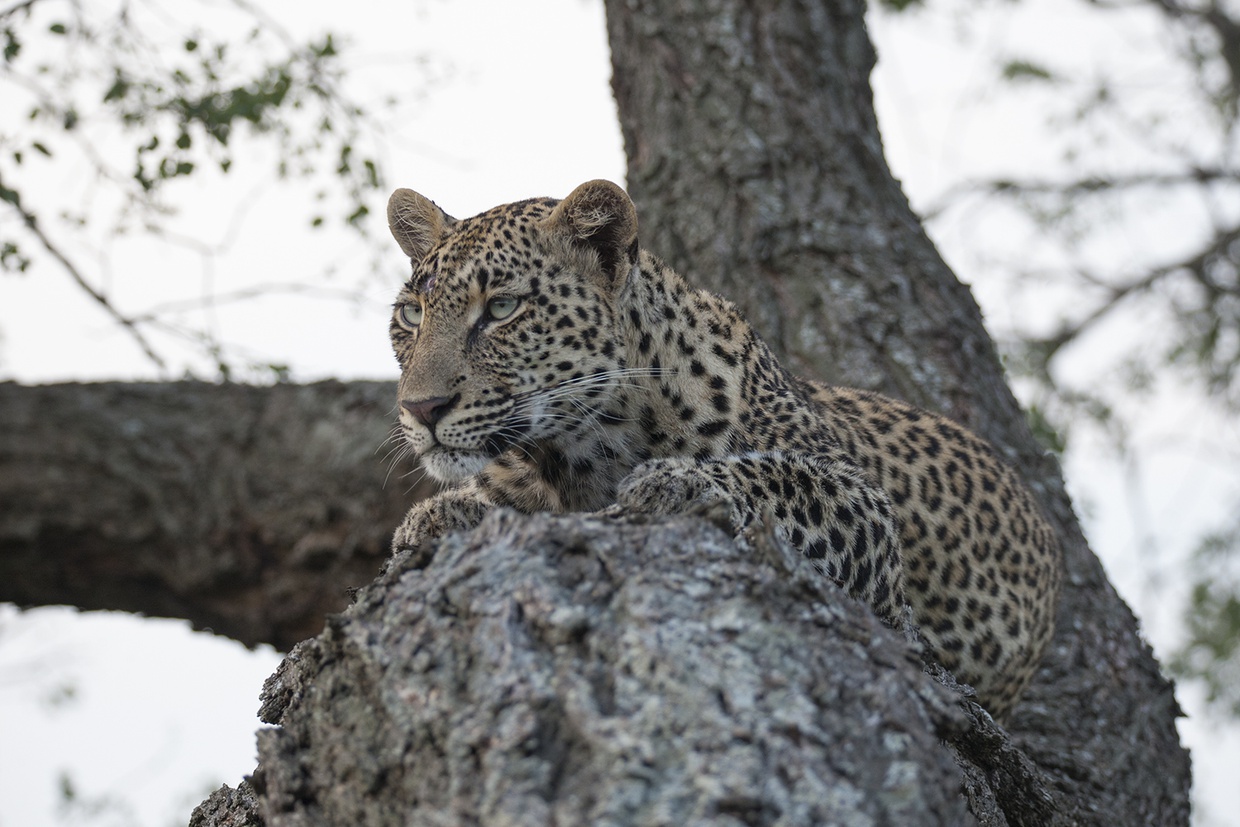 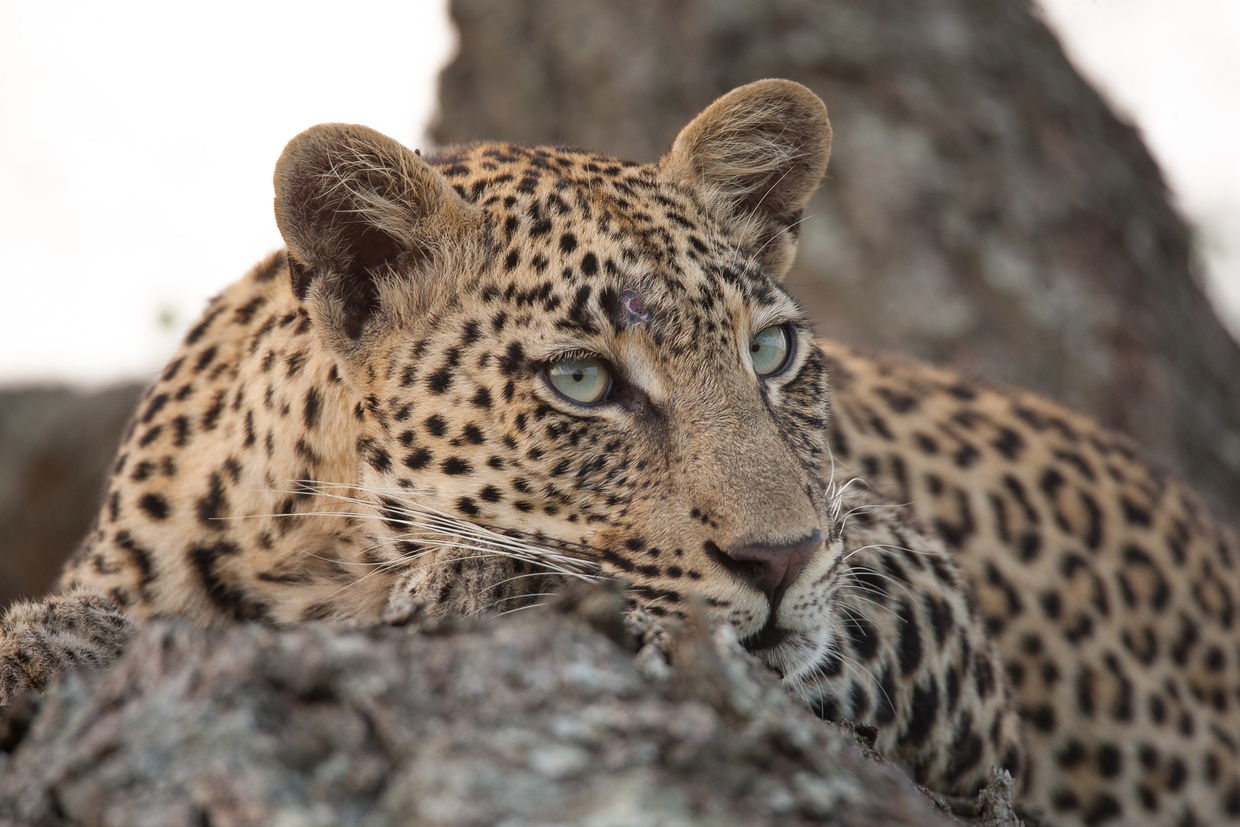 Fortune certainly smiled on us that day and the return guests were able to now say that they had seen a leopard in the wild, and not only that but were part of the whole experience of firstly looking for her, then tracking her and then finally finding her and we left the sighting satisfied and happy, with only one thing left to do. Stop for sundowners to celebrate the afternoon of luck.