Guest blog- Through the eyes of a visitor 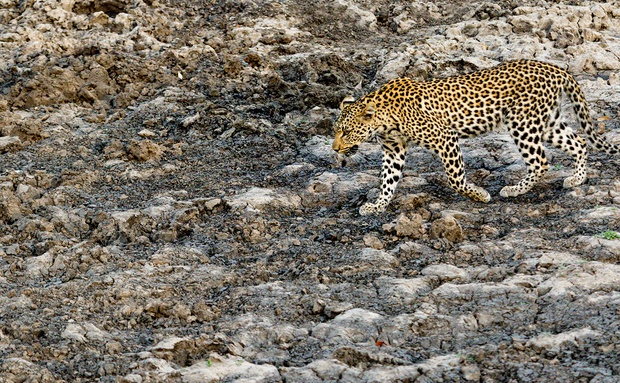 Ubuntu speaks about our interconnectedness and the fact that you cannot exist as a human being in isolation. We are not just individuals separated from one another; what we do affects others which in turn affects the whole world. -Archbishop Desmond Tutu

And still the rains hadn’t come. We were on vacation and privileged to be able to spend a whole week at Umlani. So we were not about to complain about keeping dry. But it speaks to the richness of the Umlani experience that by the end of the week, we too were praying for the rains to start. For our week had taught us that that Ubuntu is not just about humanity but our fellowship with other kinds of creature too. The solidarity of life. And these other wondrous creatures needed the rains to come.

So many wonders this week in late November. Being woken by a lion roar from the river bed but sounding right outside the hut so that we felt his call rumble behind our ribs. The baby Nyala hidden by parents just outside our hut. The honey badger who, having escaped my night camera trap all week (I think he did not want to be photographed in case he could be identified to the authorities), strolled into the bar on the last night as we sat around the boma. Our Tracker Andrew spotting an Eagle Owl 200 meters away so that we guests were left wondering who had the sharper eyes: the owl or Andrew. 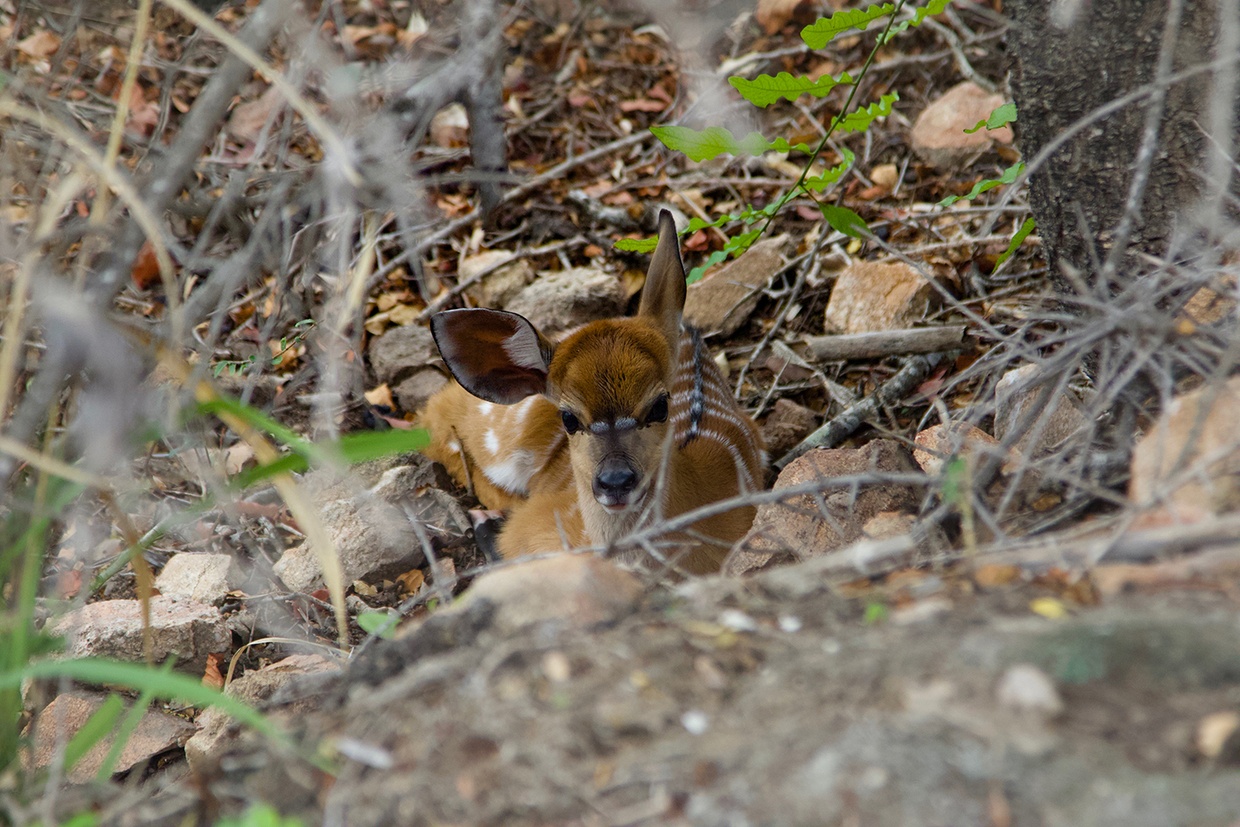 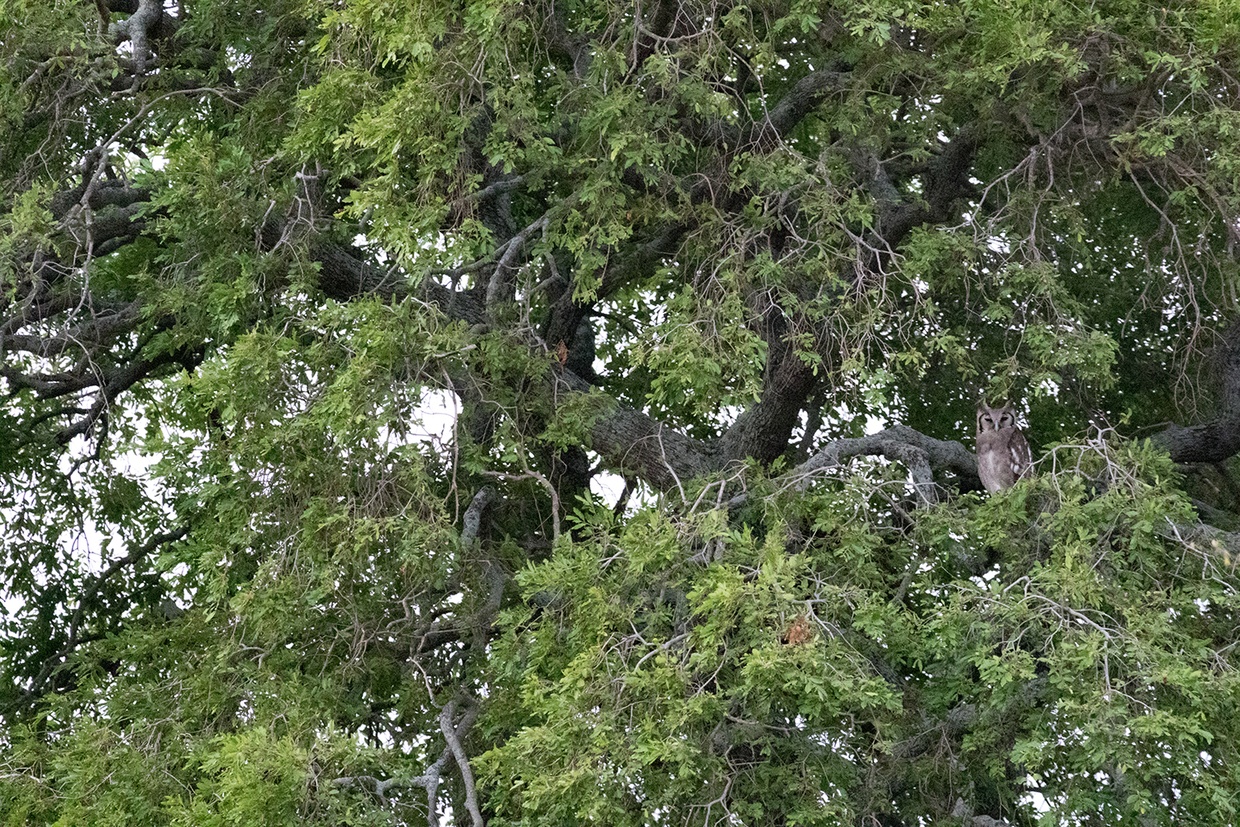 Lions from the Zebinine pride on their way to snag a buffalo at Marco’s Dam. Elephants cooling down in the mud at the camp waterhole. An adolescent elephant chasing thirsty kudus then being admonished by its elders. A leopard drinking under the moon. Another hunting at night. So many wonders. 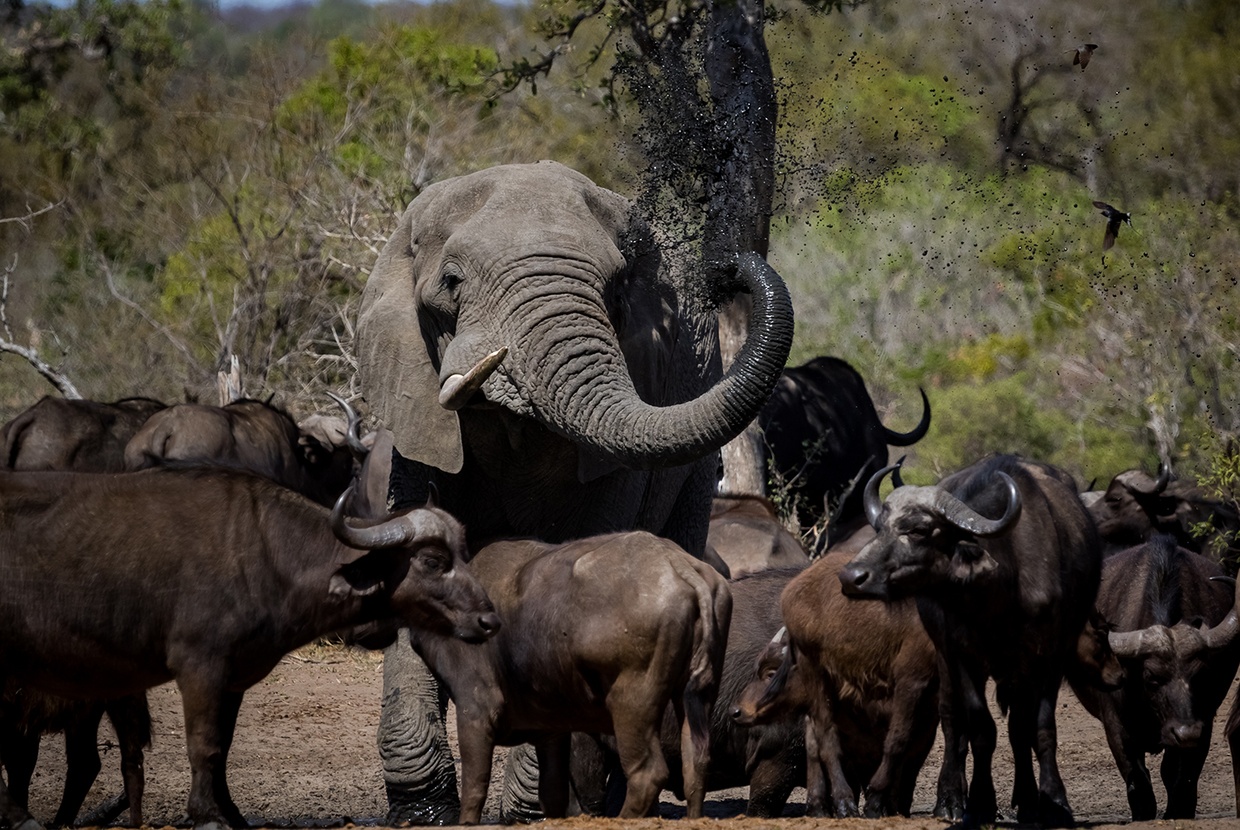 As we “jigger-jiggered” across the properties, we came to learn that the crackle of the radio might herald some new wonder. Amongst the chatter of traversing permissions courteously sought and rarely denied, we guests would catch the magical words ‘ngala’, ‘yingwe’, ‘malhowa’. “What would you like to see this drive?” said our ranger. “How about a leopard on a hunt?” we joked. And then an hour later we were speeding along the tracks and then bashing through the bush, diving low in our seats to avoid the thorny bush branches and there indeed was a leopard, tail down, moving with purpose, her gaze fixed on the duiker, hiding in the grass thirty meters off. She walked within a foot of our truck, as we sat breathless, and our hearts pounding. 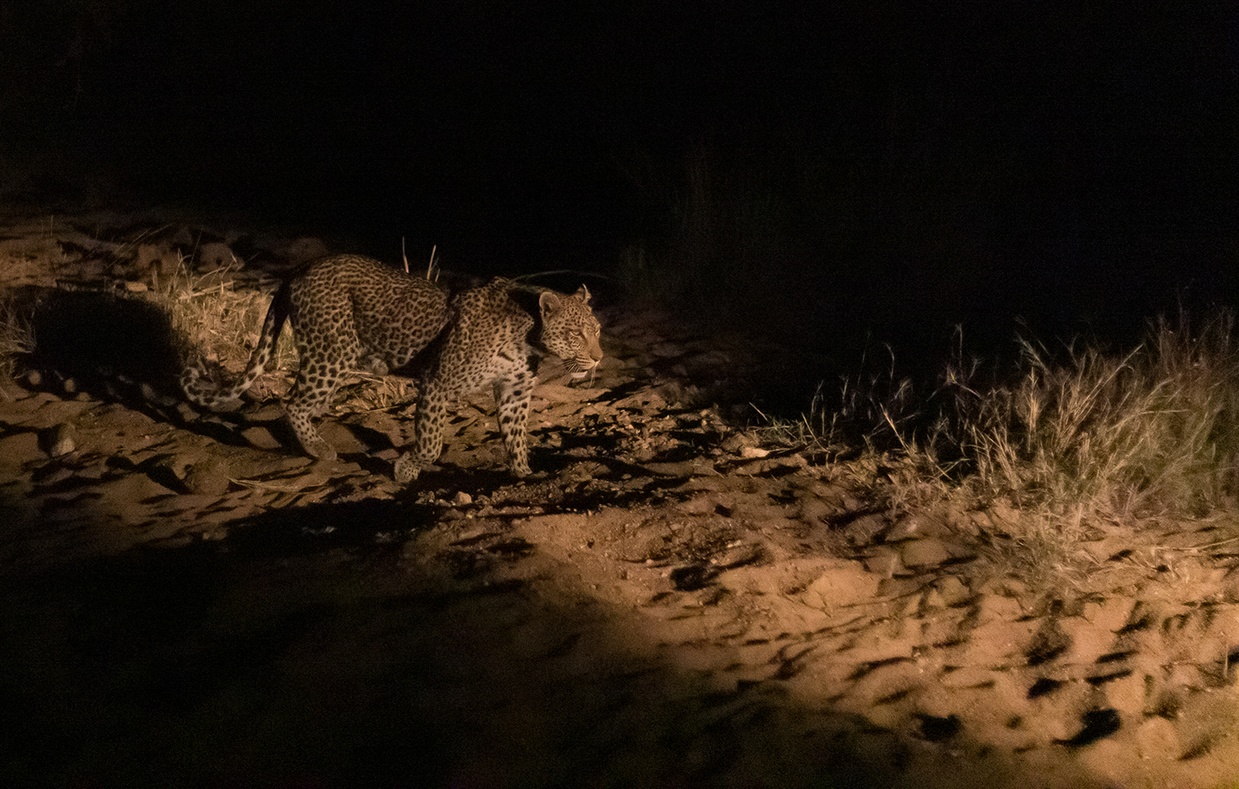 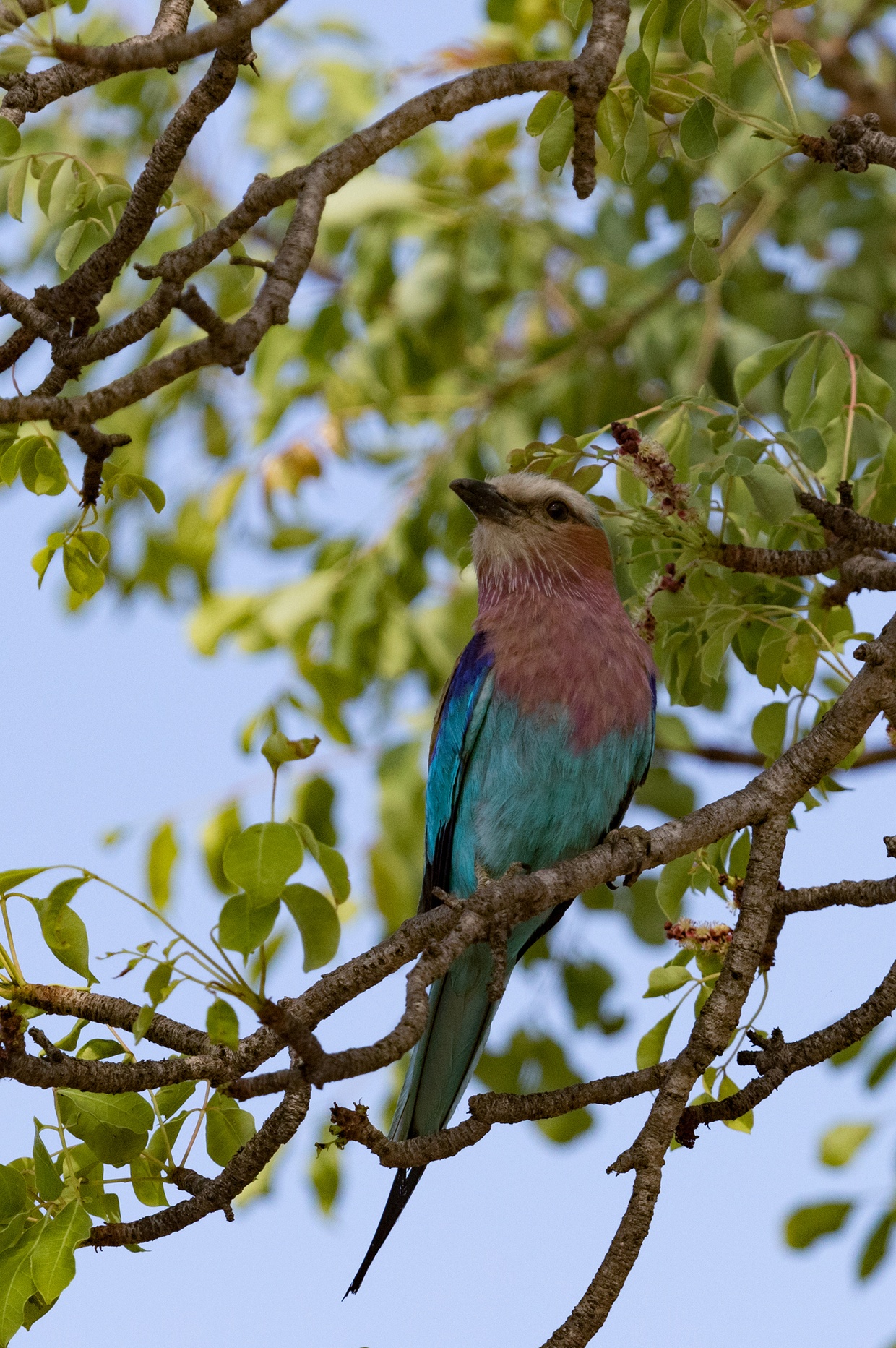 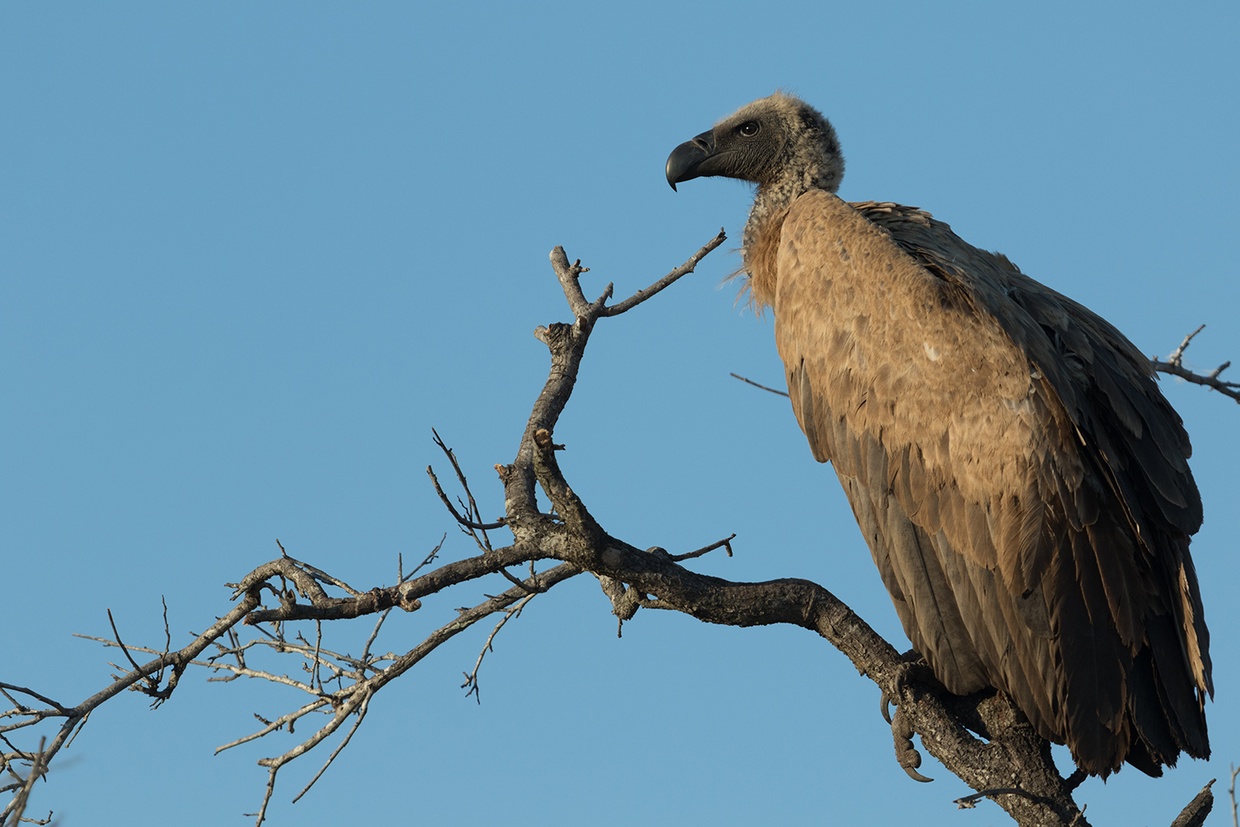 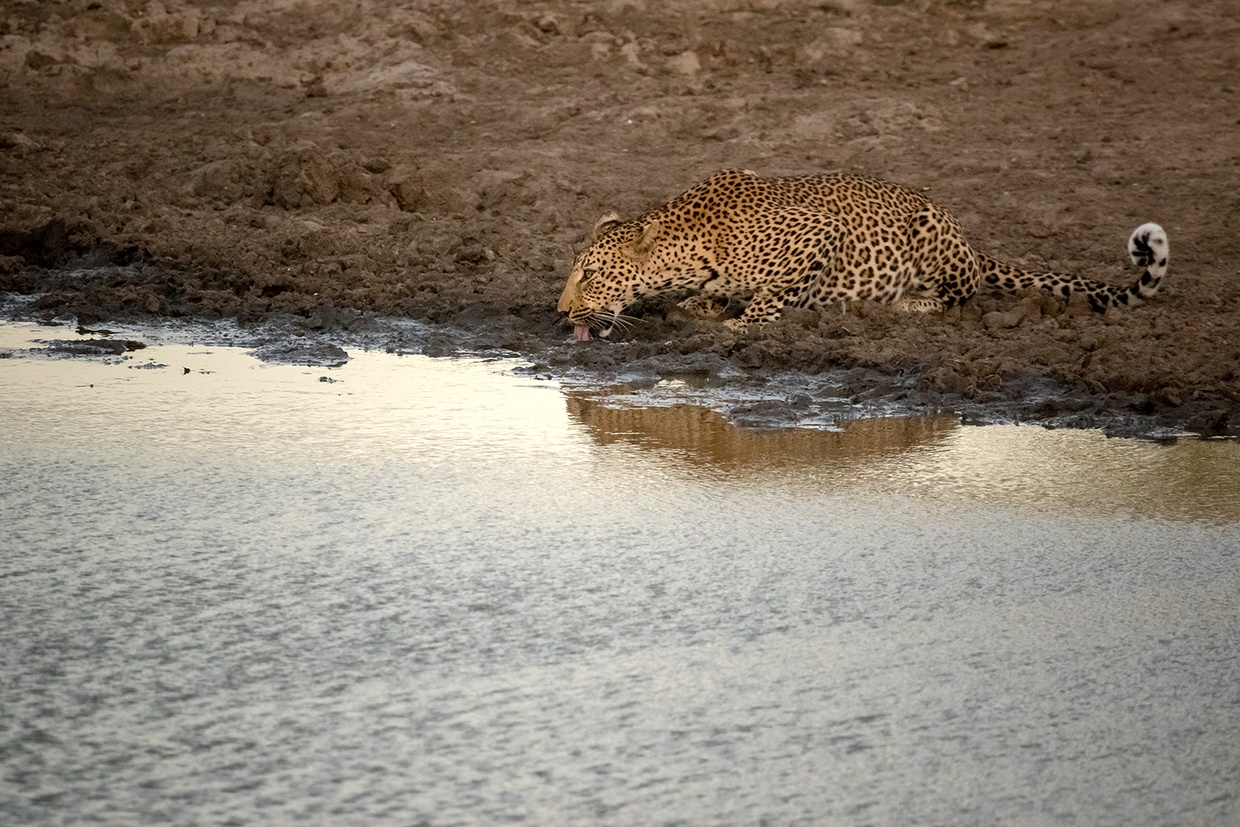 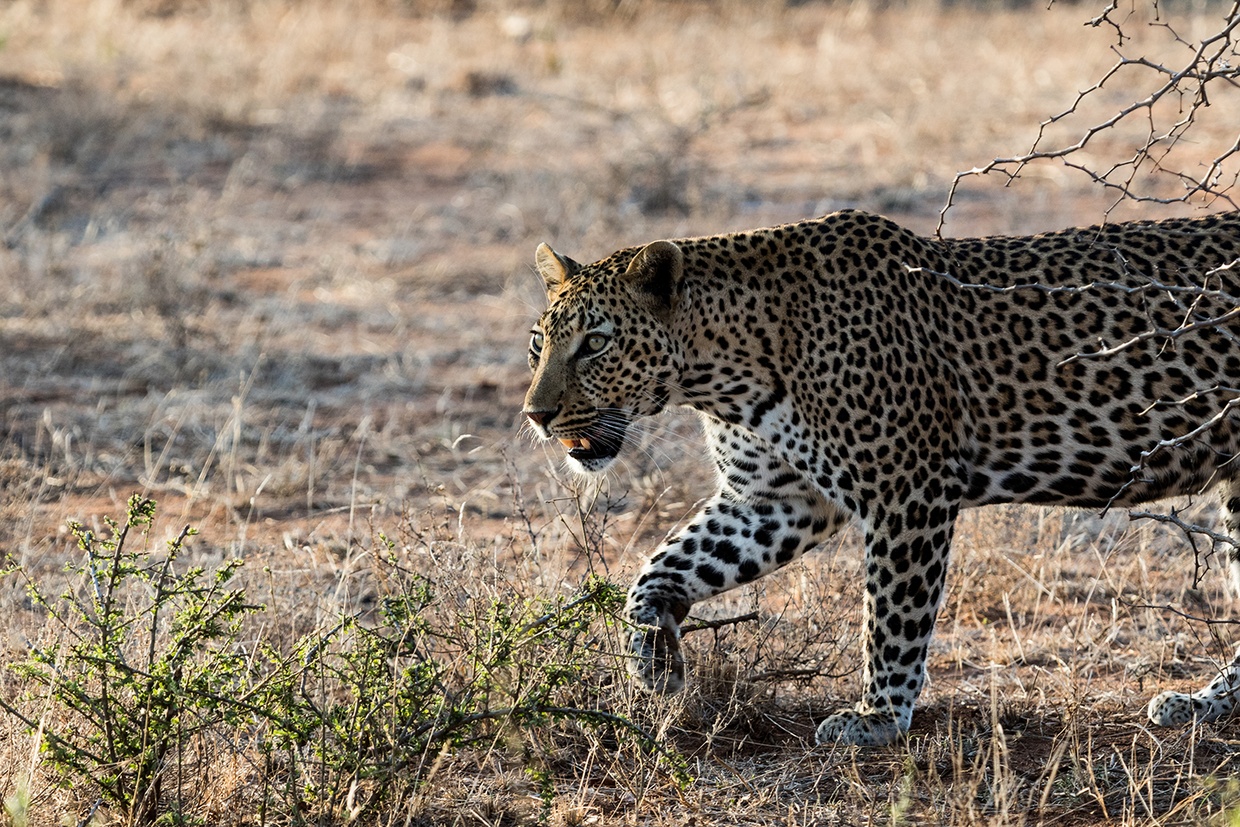 Central to the Umlani experience is the expertise of the Rangers. One an extraordinary driver who knows the terrain like the back of his own huge hand. Another with a luminous passion for wildlife richly informed by a knowledge of ecology and ethology. Another, from and of the bush, whose grandfather is a Timbavarti legend responsible for the first fences coming down.

As a photographer, I was keen to glean some tips from Umlani’s Greg McCall-Peat whose photography on this blog I have long admired. We were treated to a one-off private drive and were completely blessed to find the Zebinine pride ready for their morning drink at Marcos Dam. So every possible kind of wildlife photography challenged was covered. Walking head on towards us, cubs running and playing, males drinking side by side, the whole pride together. All this in the perfect light of the morning golden hour. It was a leonine model shoot. My shots were still not quite as good as Greg’s, but I learned a great deal. 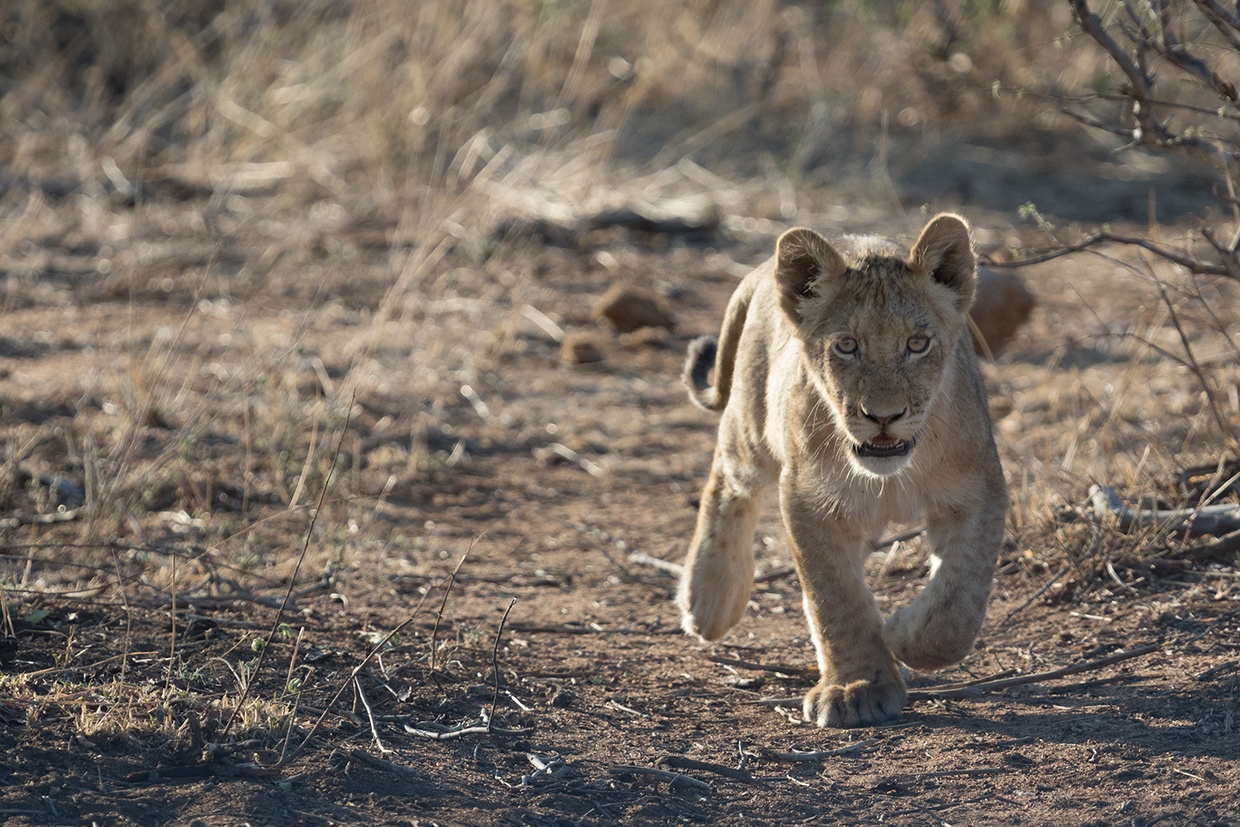 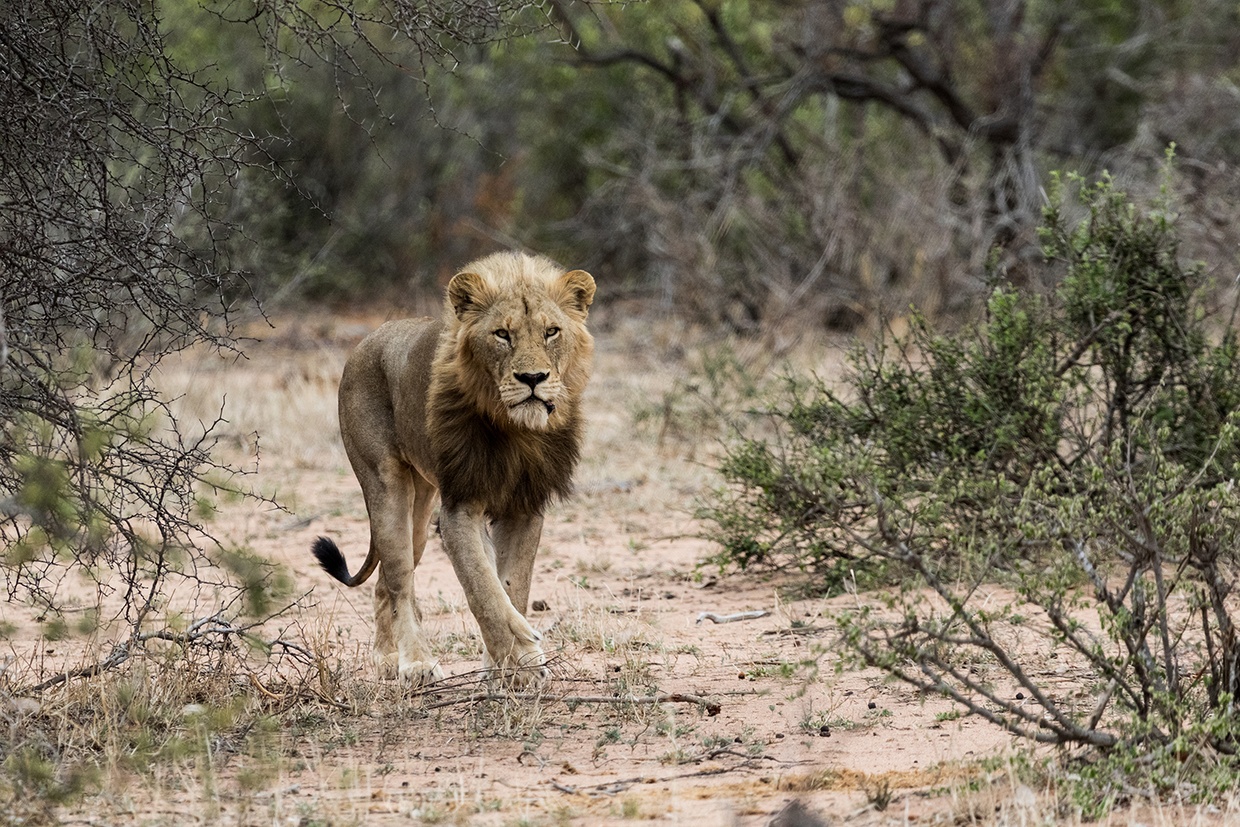 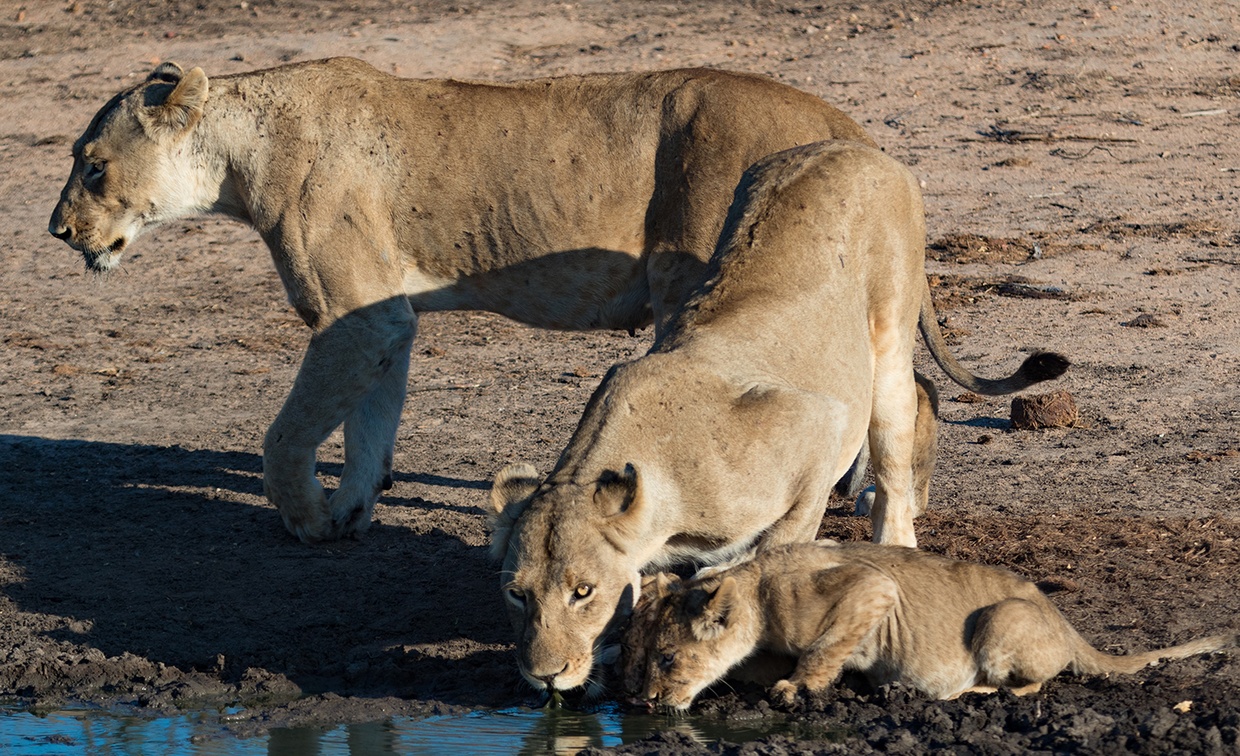 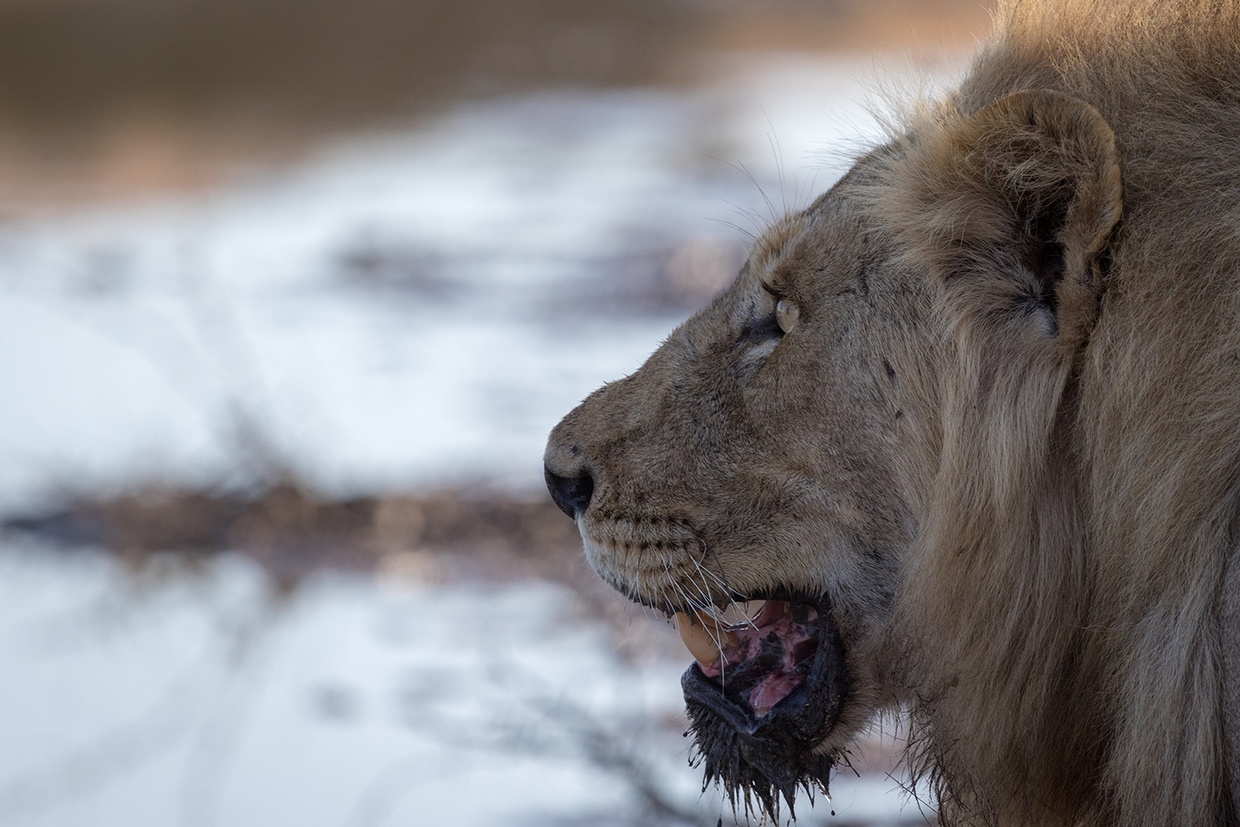 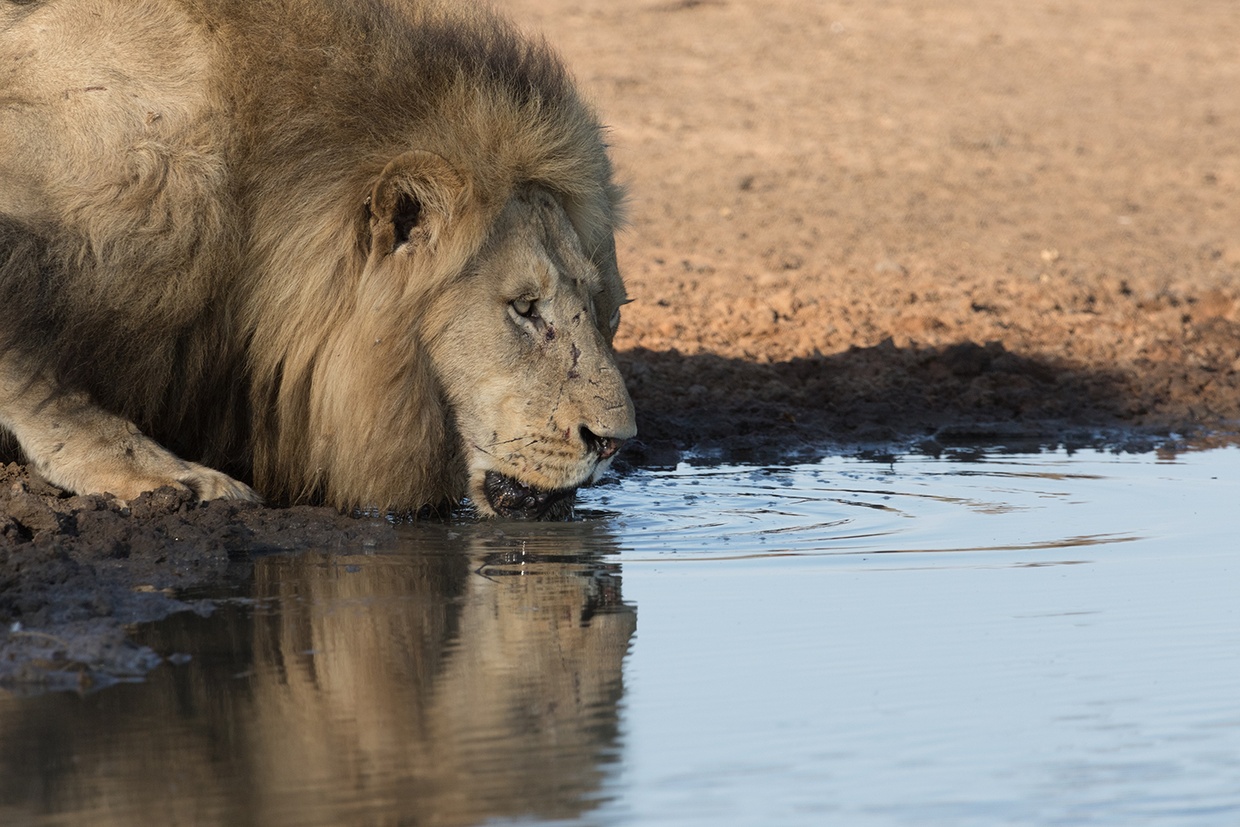 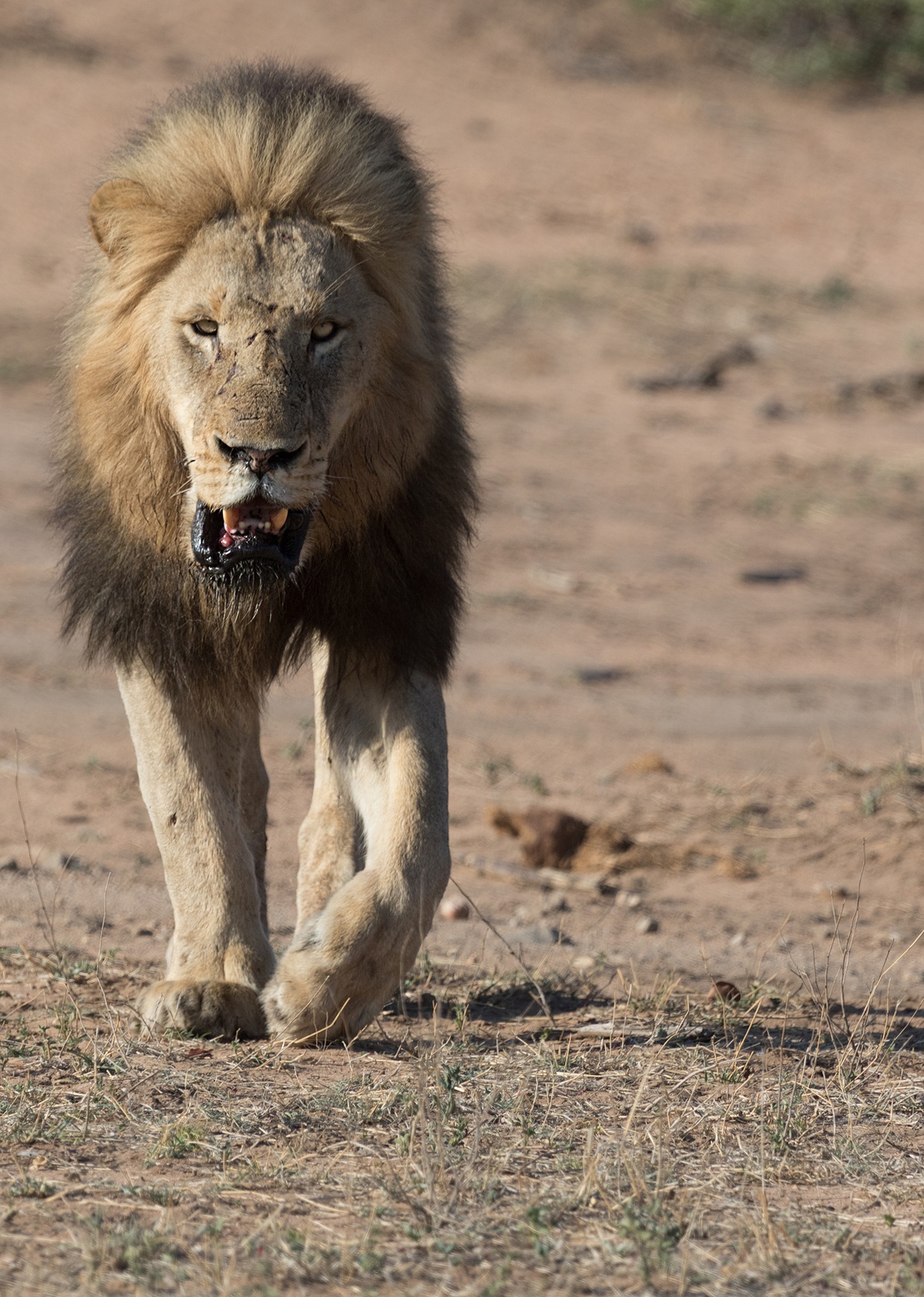 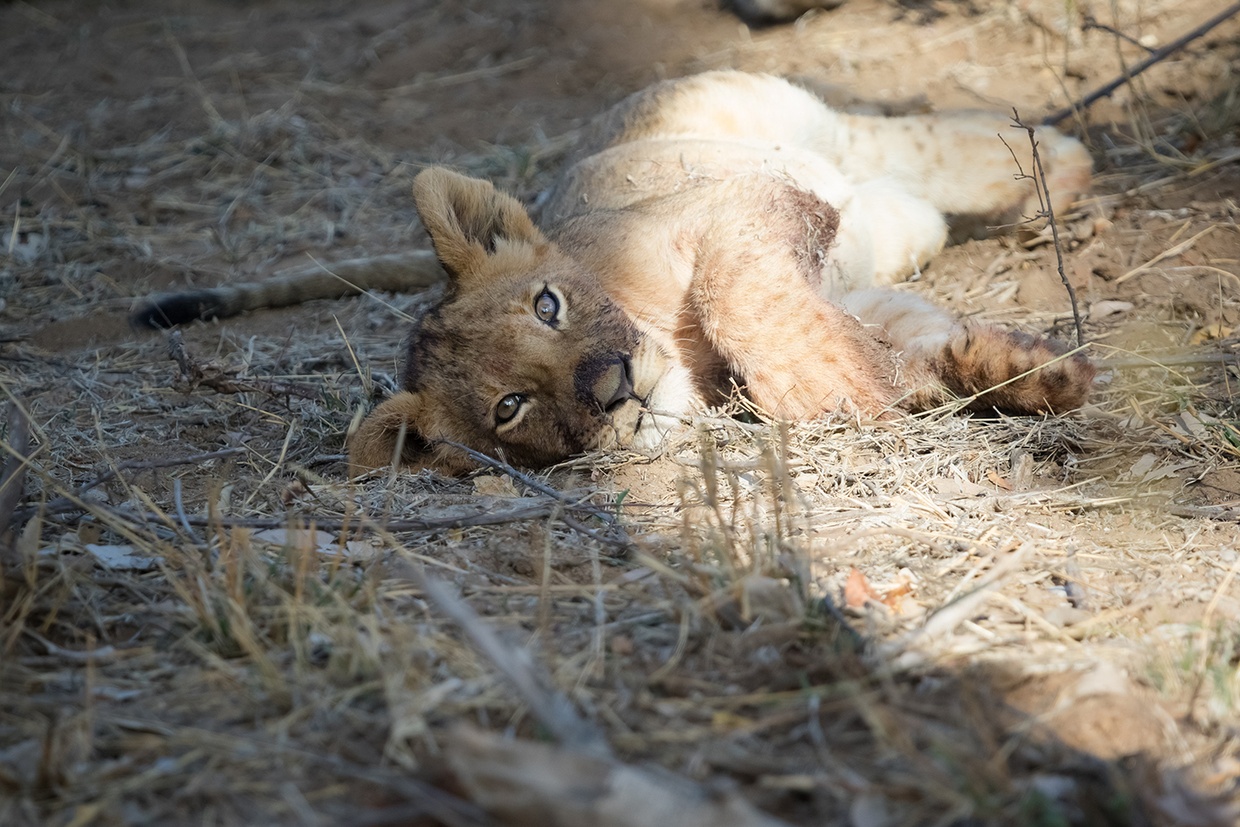 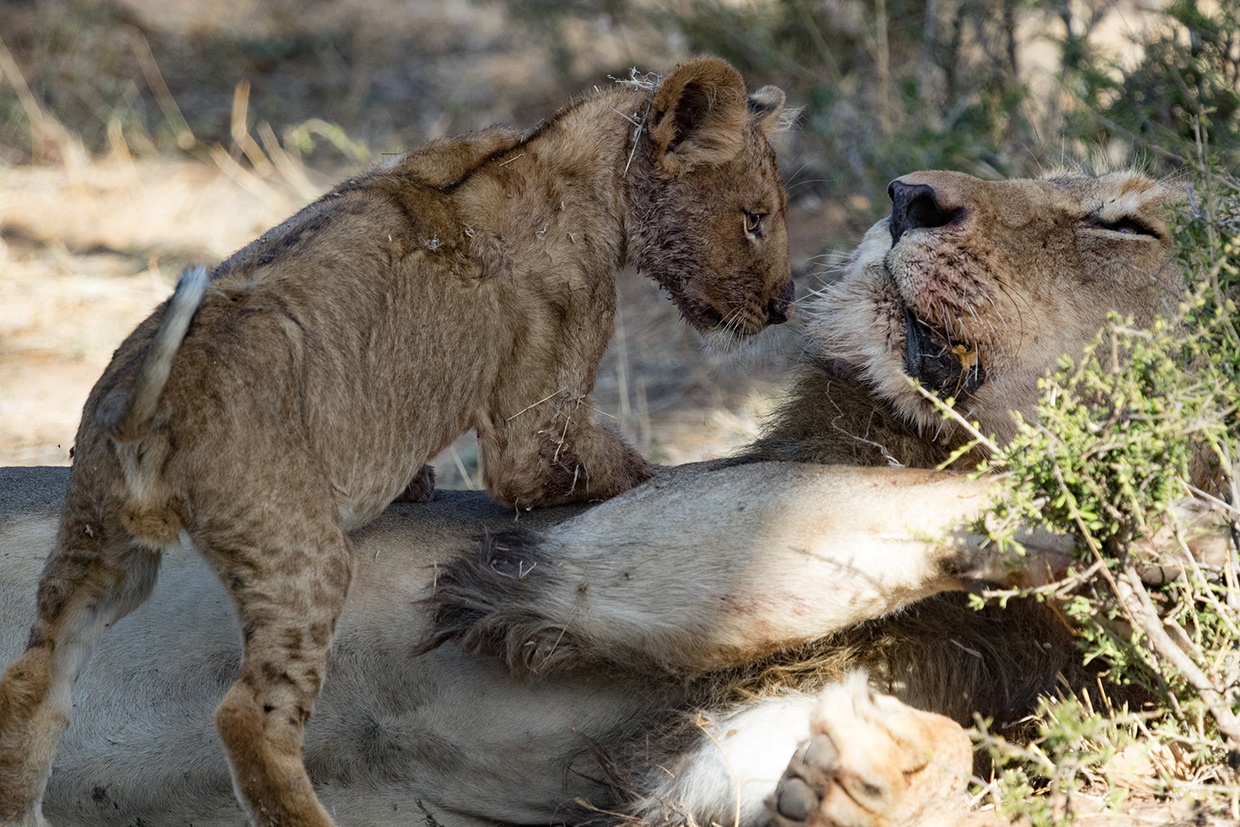 It’s natural enough on a first trip to Umlani or on the first game drive for a while, to want just to see the Big Five. On one drive we did that in the first ten minutes out of camp. But Umlani has a way of moving you beyond ticking boxes. It’s time then to take the time and savour what Umlani is really about without the pressure of rushing onto the next sighting. Not the Big Five but what might be called the Great Eight - extended stretches of behaviour and interactions, perhaps between different species. What are the Great Eight? Perhaps:

It is seeing how different species interact amongst and between themselves which gives the most vivid sense of their lives and the shape of their worlds. Best of all is to see how these common dimensions of any animal’s life are given a special twist through a unique context or through the lens of the animal’s particular personality. This is perhaps especially true of leopards and we were privileged to see one encounter that ticked many of these better boxes.

Nyeleti– which means Star in the local language of Shangaan– is named for her stellar eyes. We found her up in a Marula tree, enjoying her last kill. But further up the branch was her cub, clearly watching and learning from his mother. But there were to be more and harder lessons to learn. 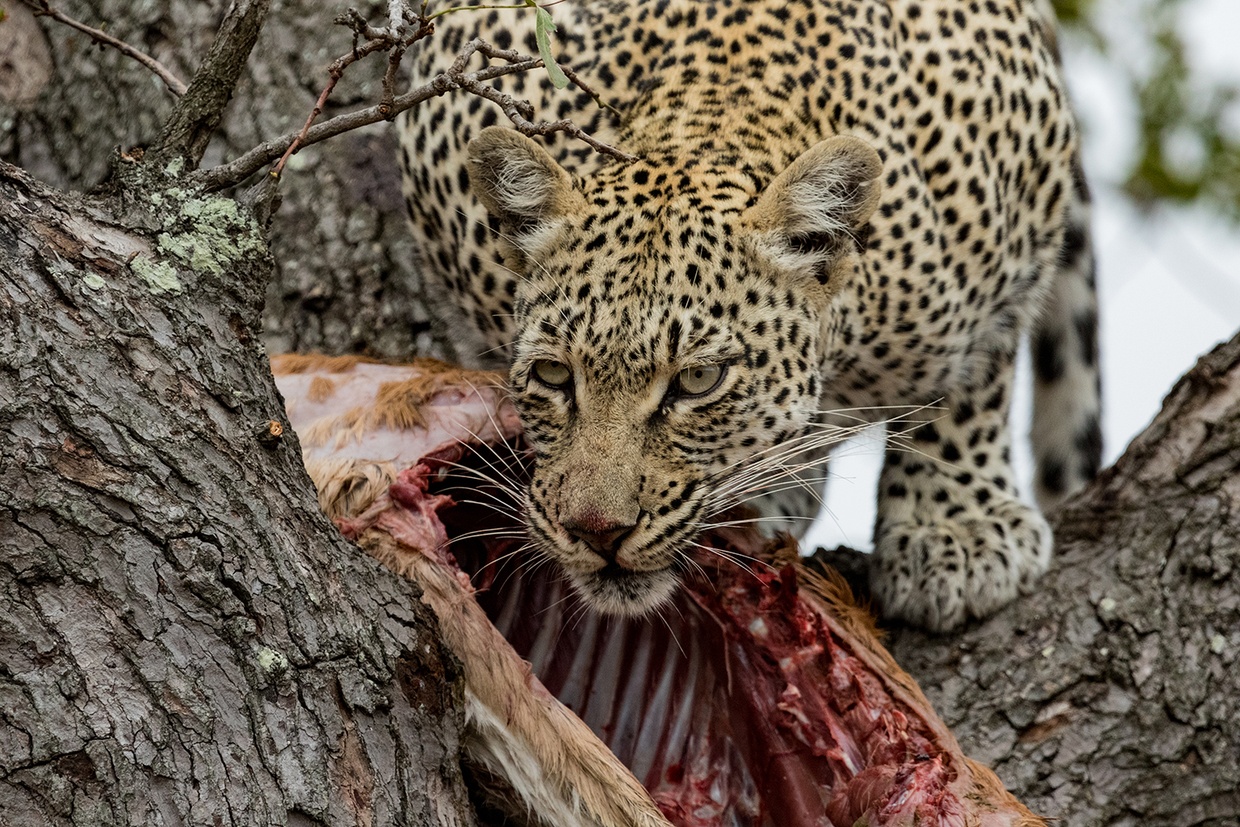 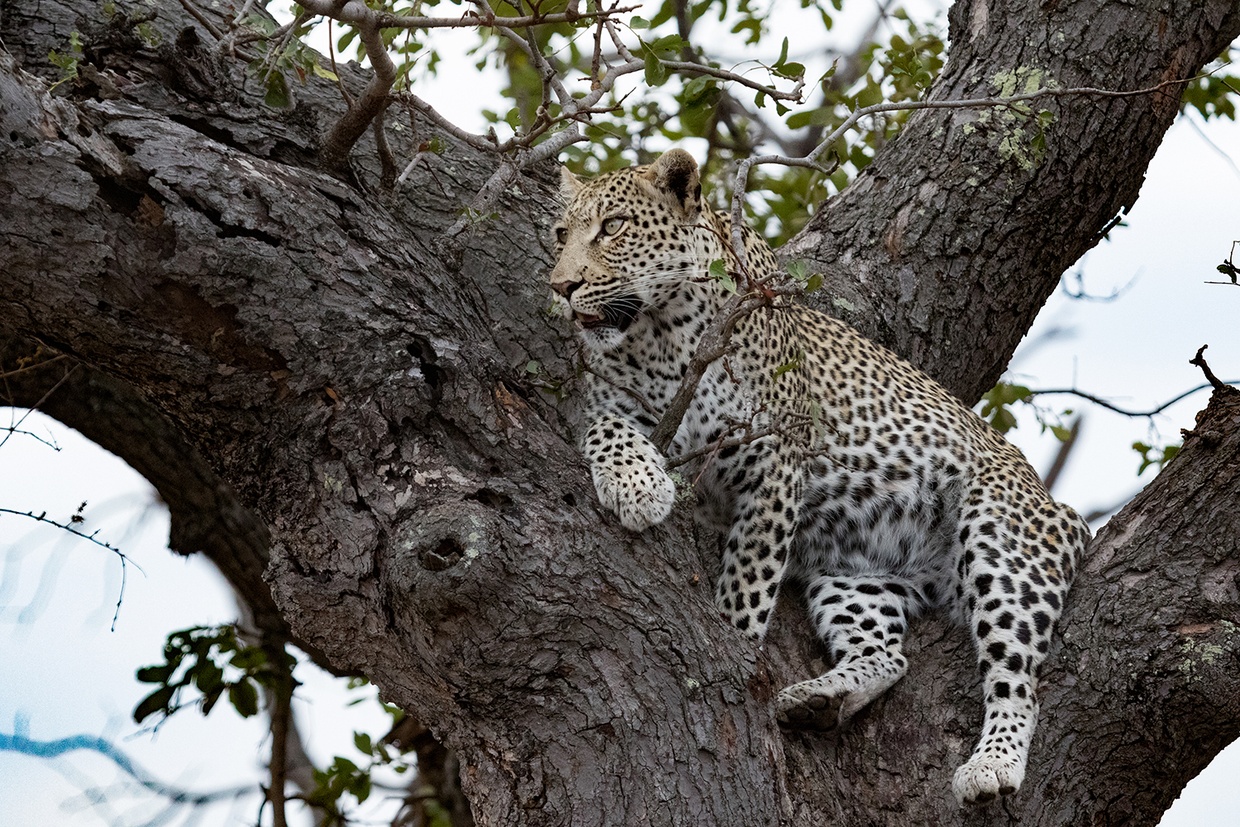 When a hyena swaggered in, Nyeleti could have stayed aloft and aloof. But not this girl. She came down into the river bed and gave the hyena no quarter. Not one but two attacks. The Hyena sloped off. We left too, wondering what effect this experience would have on the youngster. 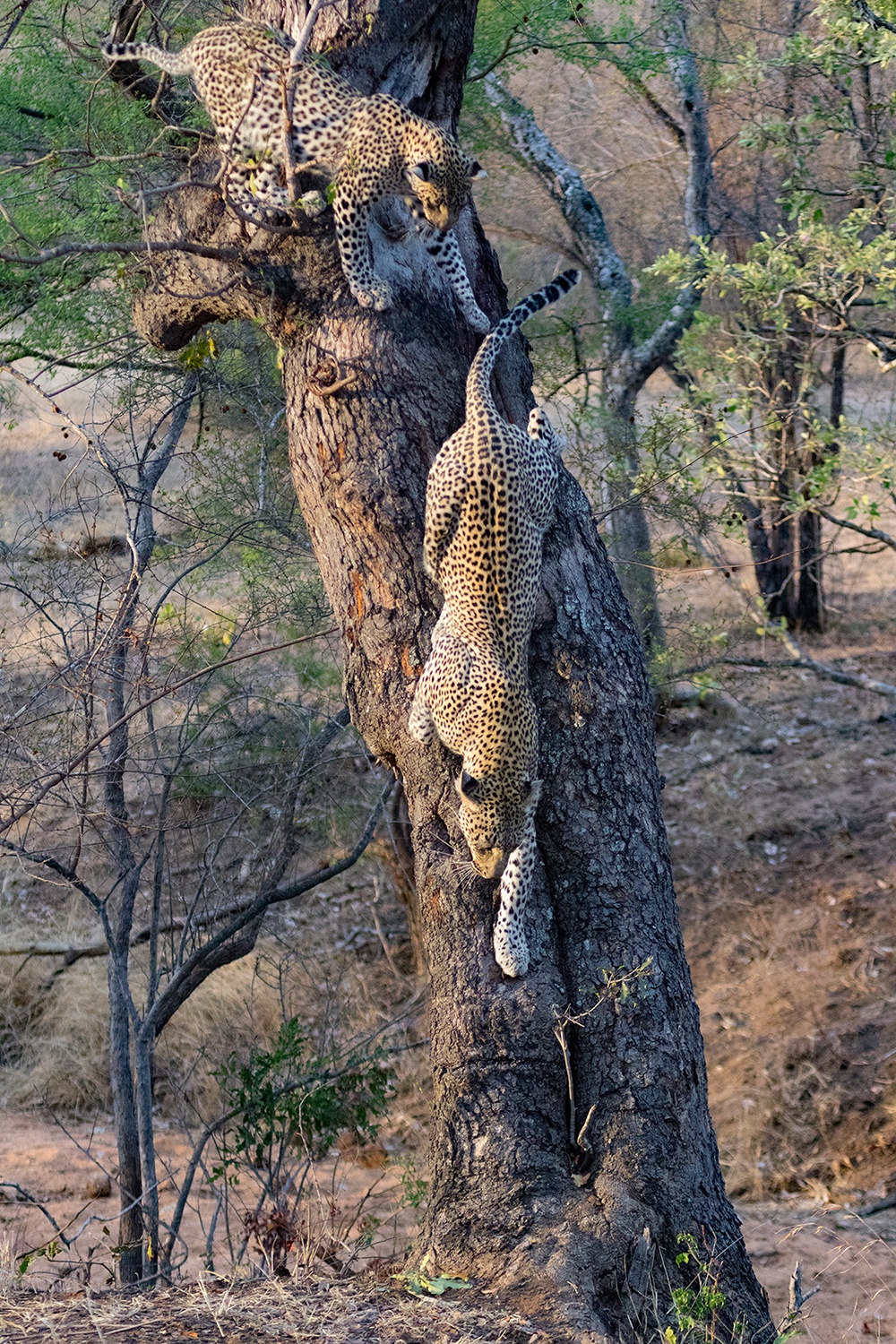 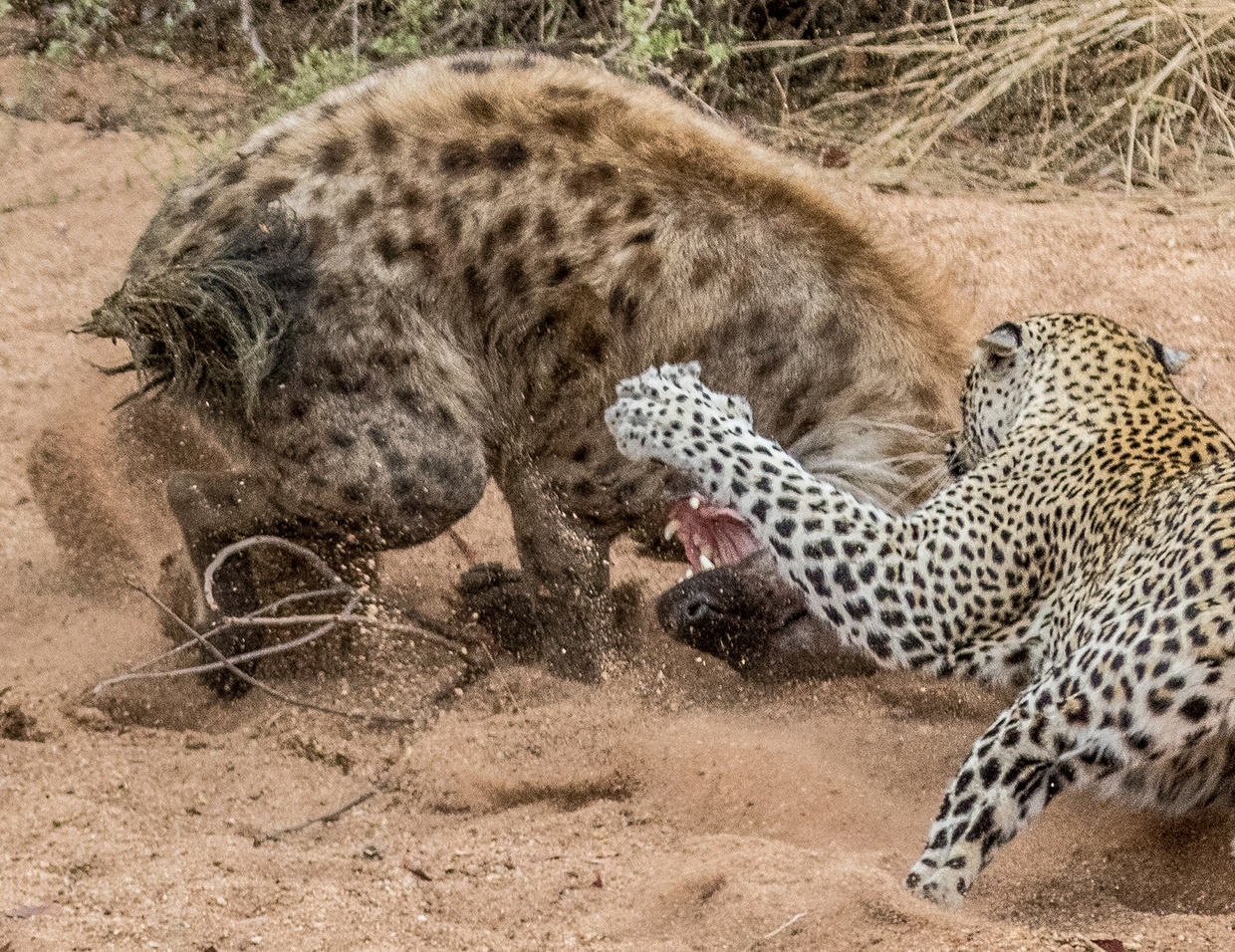 But the story wasn’t over. On the afternoon drive, we arrive back at the Marula at the exact moment that Nyeleti’s cub decided to practice his Impala carcass management. And, still learning, he fumbled it. The carcass dropped, before our astonished eyes, right into the jaws of the still waiting hyena. Its unending patience had paid off. 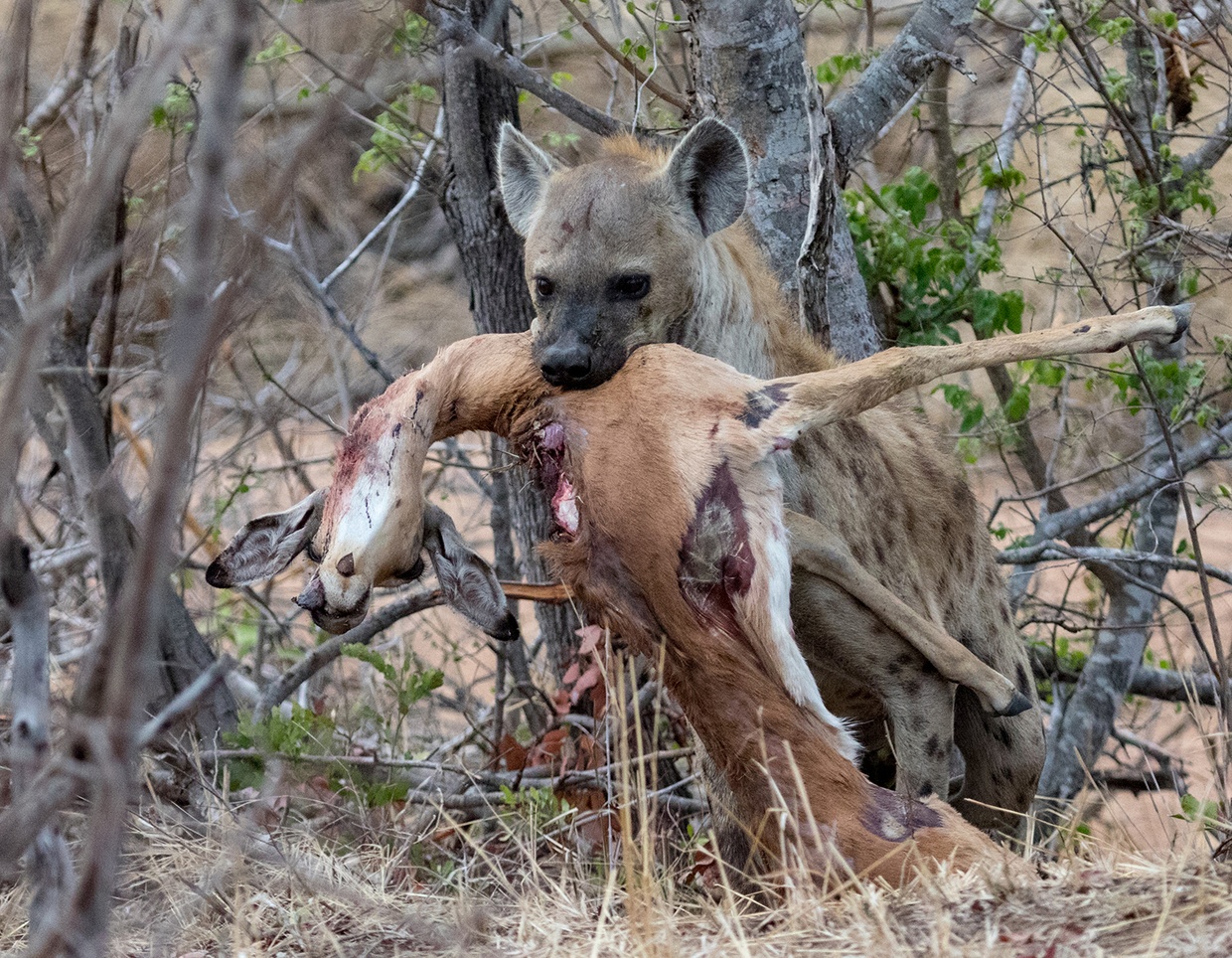 But that day, Nyeleti’s cub had learned crucial lessons both from his mother’s courage and of the hyena’s persistence. It’s encounters like these which allow those rare, sublime glimpses into the shape of worlds other than our own.

More of the Great Eight was offered at the rebuilt and greatly improved Tree House at Marco’s Dam.

One morning, we stood on its balcony entranced as some 23 elephants, of all ages, arrived to drink from the fresh water feed. They stayed more than an hour and a half, the rather eccentric male in the group just refusing to move from the fresh water. It was fascinating – and moving - to observe the social interactions from the tree house balcony. Just we two and them. The entreaties and frustrations. Stubbornness and impatience. It is one thing to sight an elephant. Quite another to be witness to their interactions so that you catch a glimpse, however partial, of how their world is for them. It is then we gain the most vivid sense that the world is, and ought to be, shared. Ubuntu. 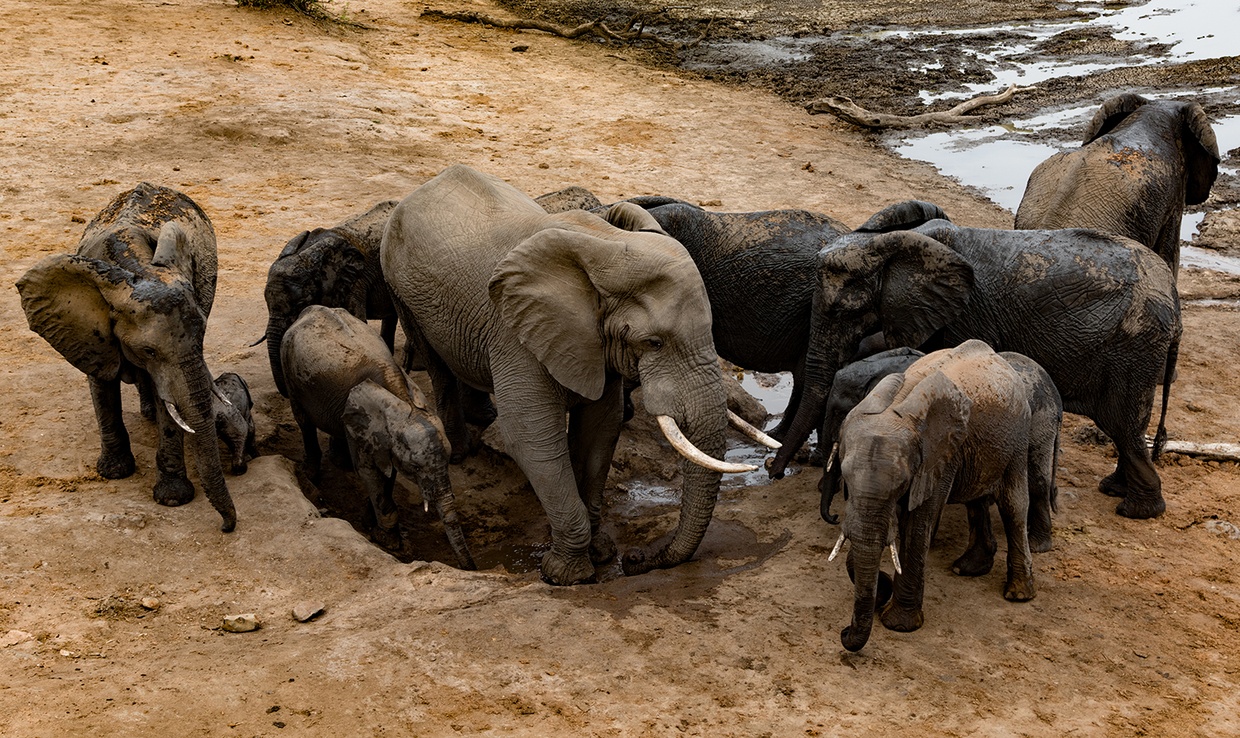 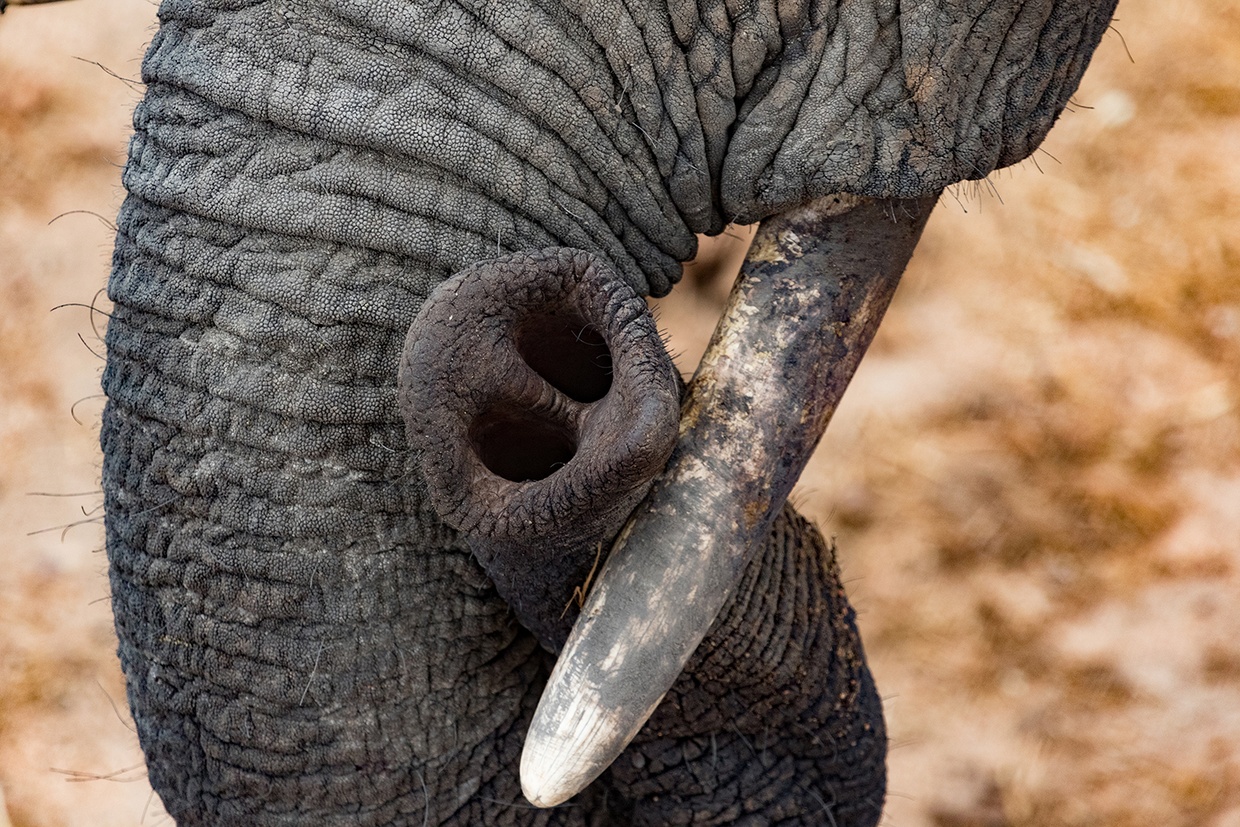 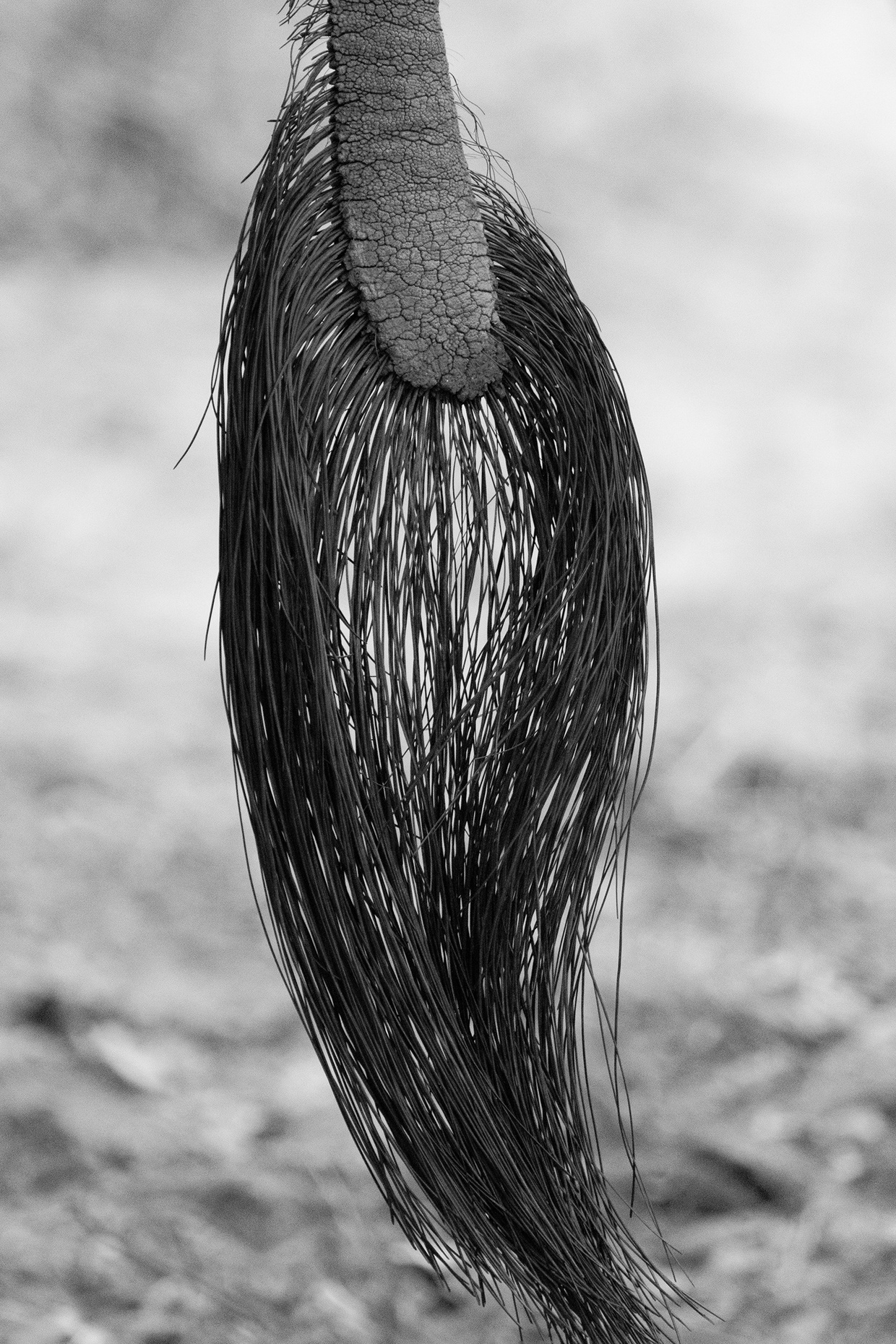 Back at the boma, guests swop their stories, their smiles lit by the flames of the ‘Bush TV’. It only has reality shows. Guests: first timers at Umlani or there, like us for the 4th or others for the 9th  or more time. Young and more senior. Relaxed into the Umlani routine or just on the excited side of nervous. Sharing stories of the day in the spirt of Ubuntu. 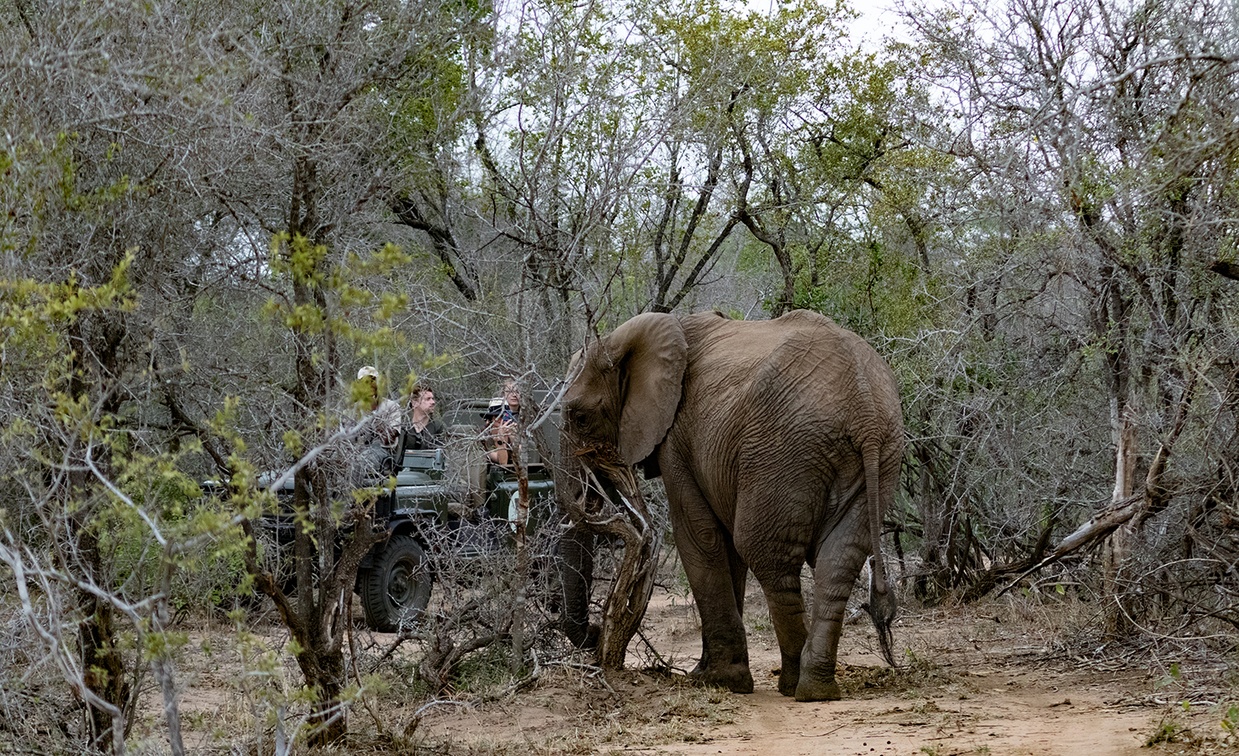 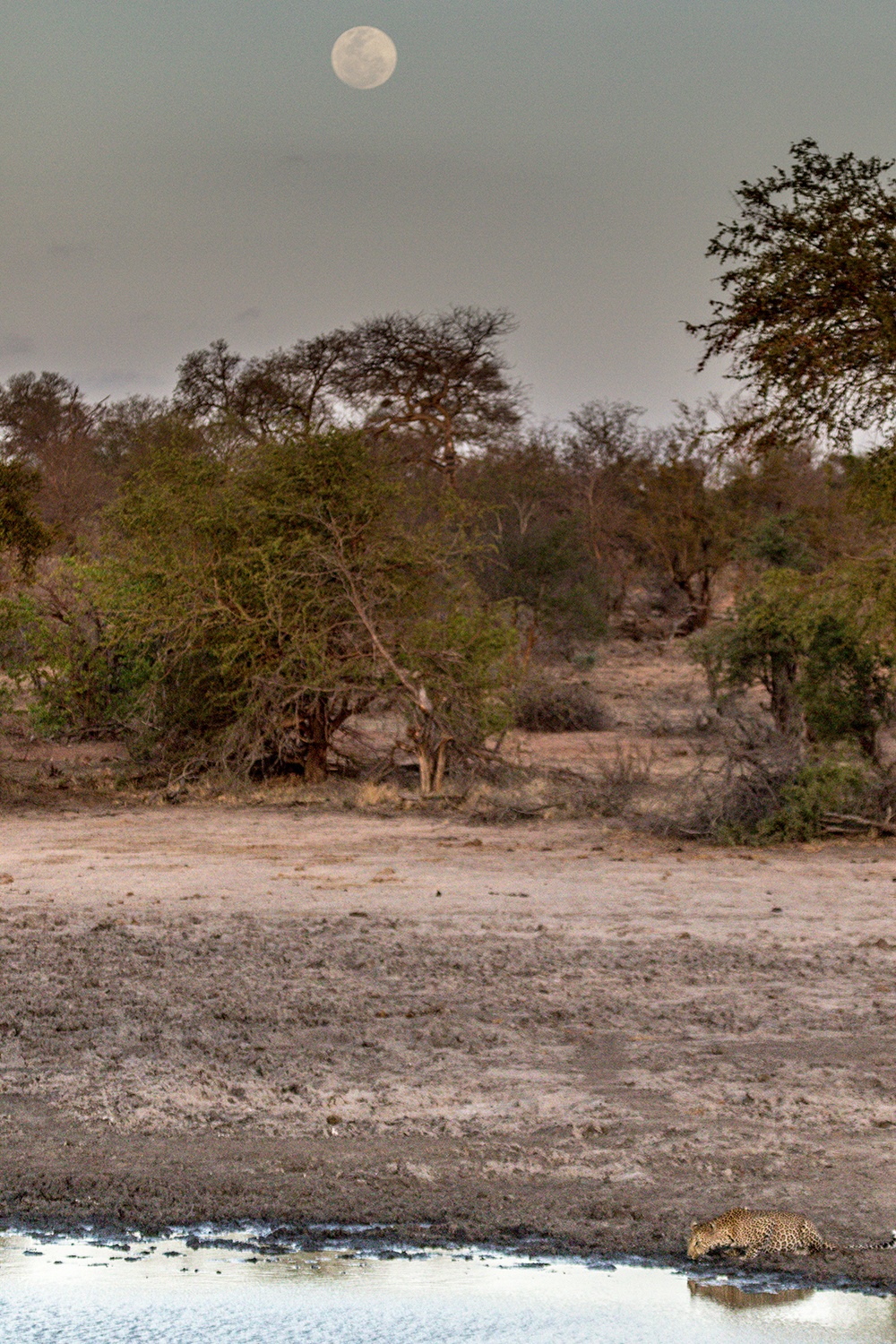 Then rounds of hugs, handshakes and kisses as suddenly, it was time to leave. Sadly, there always comes a time when you have to leave Umlani. The good news is that Umlani will never leave you.

But for us, this week in late November was not five stars but seven. And two of them were the eyes of a leopard named Nyeleti.

Perhaps, one morning, after we left, she climbed atop her Marula tree, looked up at the sky and made it rain.

Written and photographed by: Ian Ground- Umlani guest and friend