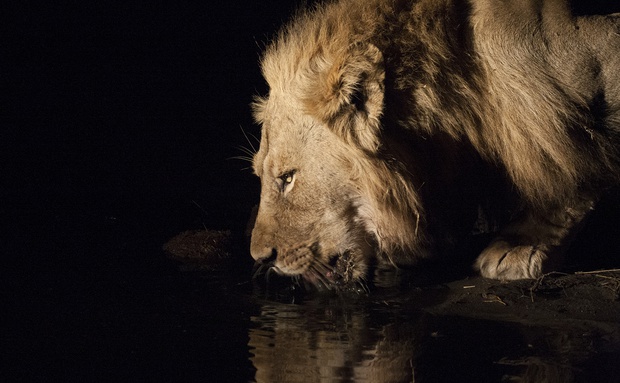 LAST NIGHT THE WATERHOLE IN FRONT OF THE CAMP WAS A HIVE OF LION ACTIVITY, WITH US SEEING THE TWO MBIRI MALES QUENCHING THEIR THIRST AFTER FEEDING ON A GIRAFFE CARCASS NEARBY, THEY WERE LATER JOINED BY THE 4 MYAMBULA LIONESSES AND THEY SPENT THE REST OF THE EVENING LOUNGING AROUND AND REPEATEDLY MOVING TO THE WATER TO DRINK OFFERING AN AMAZING SIGHTING AND INCREDIBLE PHOTO OPPORTUNITIES.

It all started yesterday afternoon when four lionesses were seen drinking at the waterhole in camp, it was only after dinner that we went out to see the lions again. The lionesses had moved off but as we were making our way to the waterhole the reflection of light from an animals eyes caught the spotlight beam and out of the shadows the distinct shape of a male lion materialized into the light. It was one of the Mbiri males, followed closely by his brother. We positioned ourselves on the opposite side of the water in the hopes that they would carry on their path and come for a drink, the lions read our minds and did just that, to say it was an incredible sight is an understatement, and will let the pictures speak for themselves. 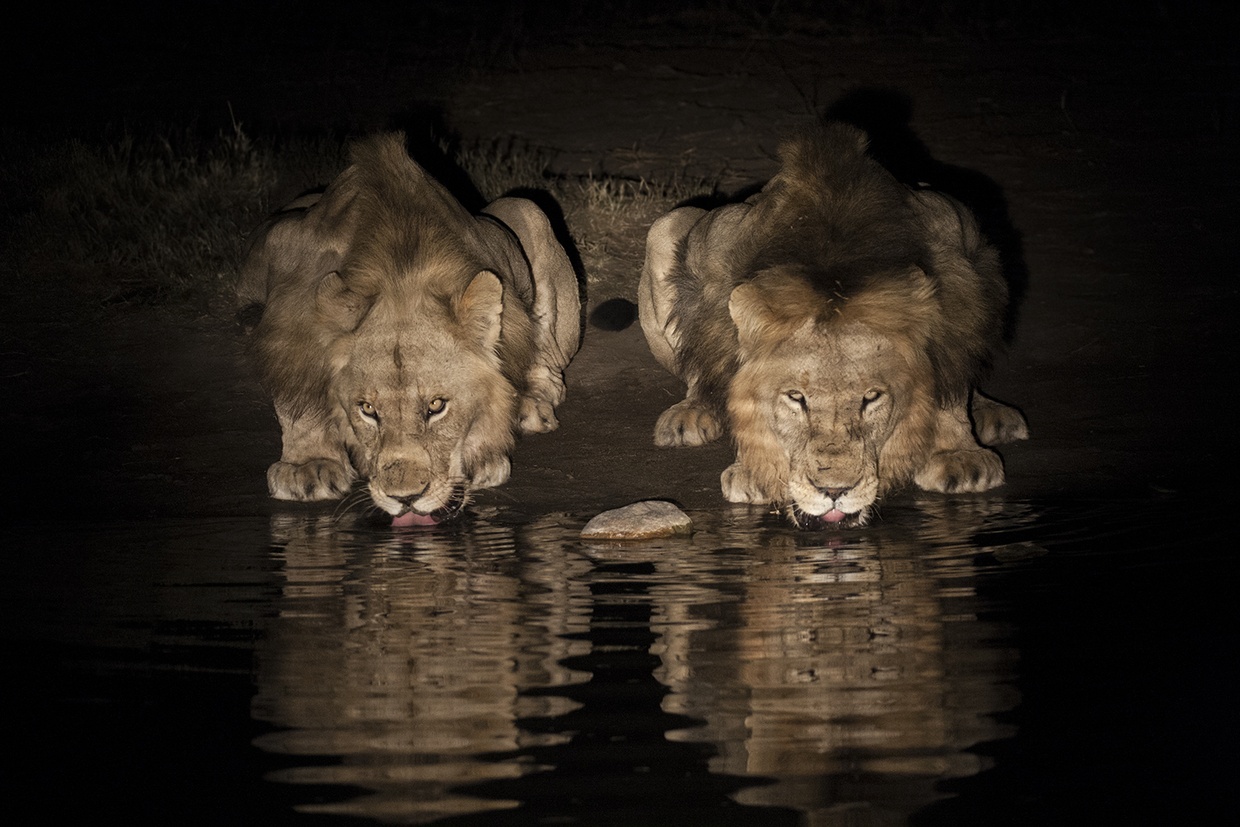 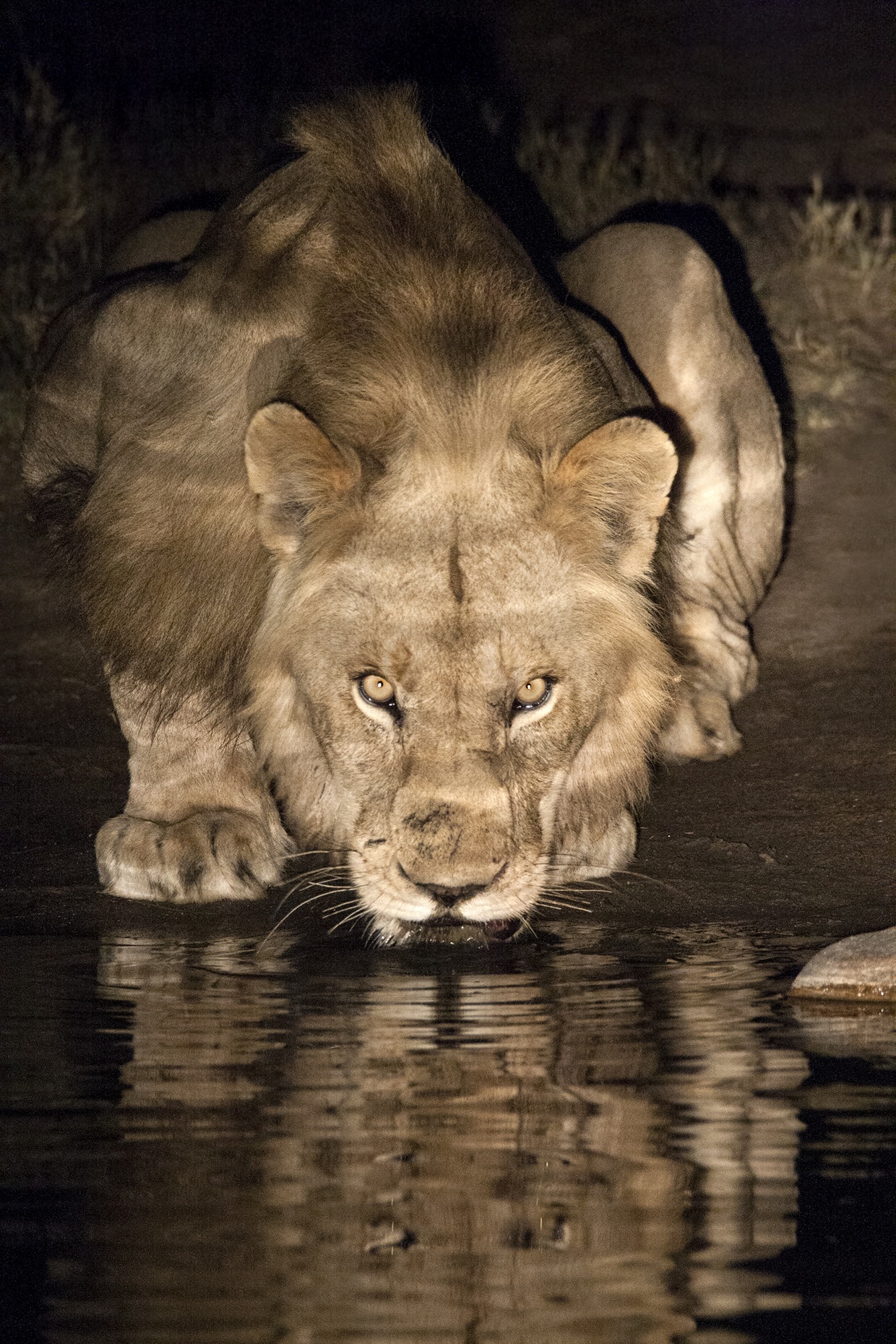 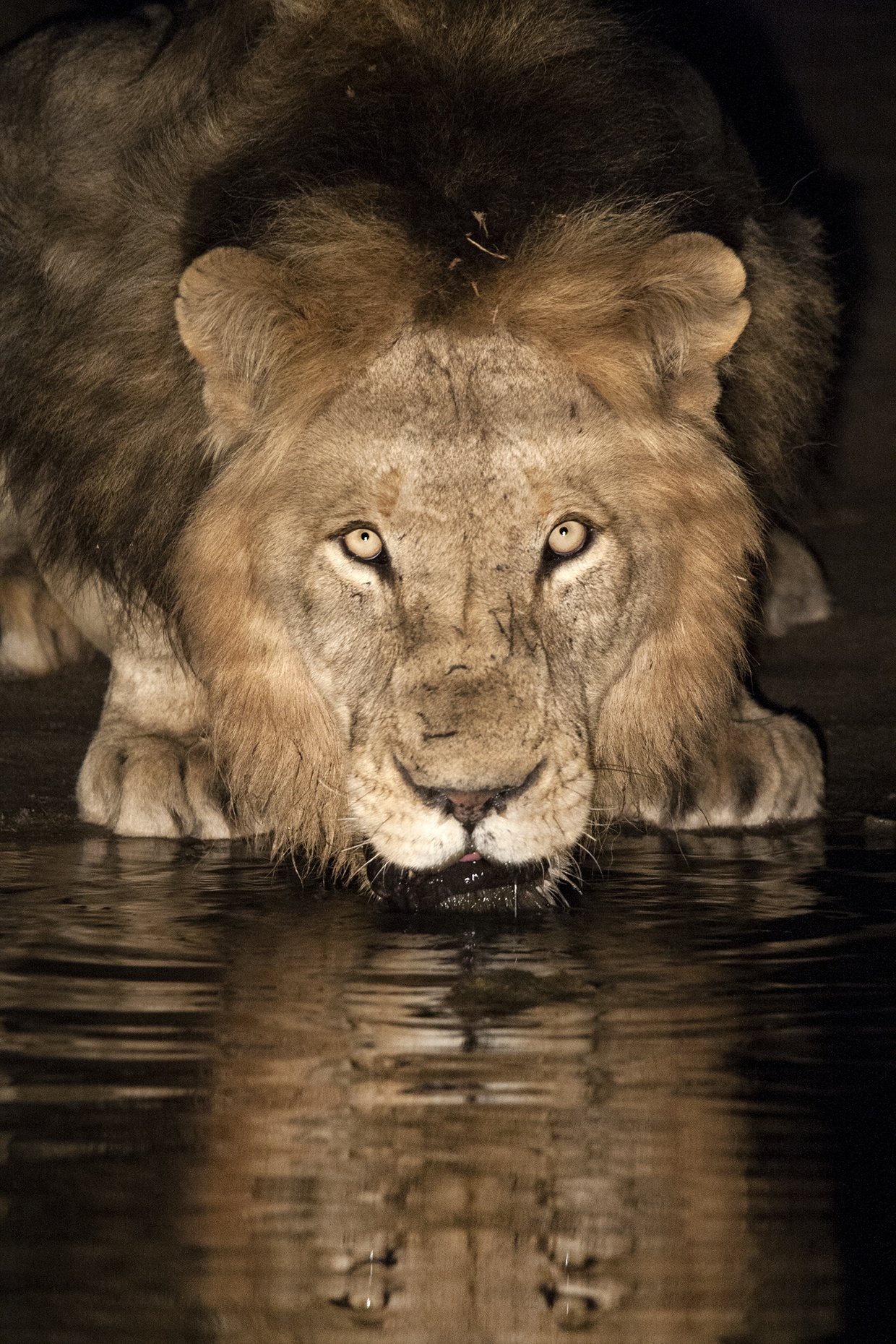 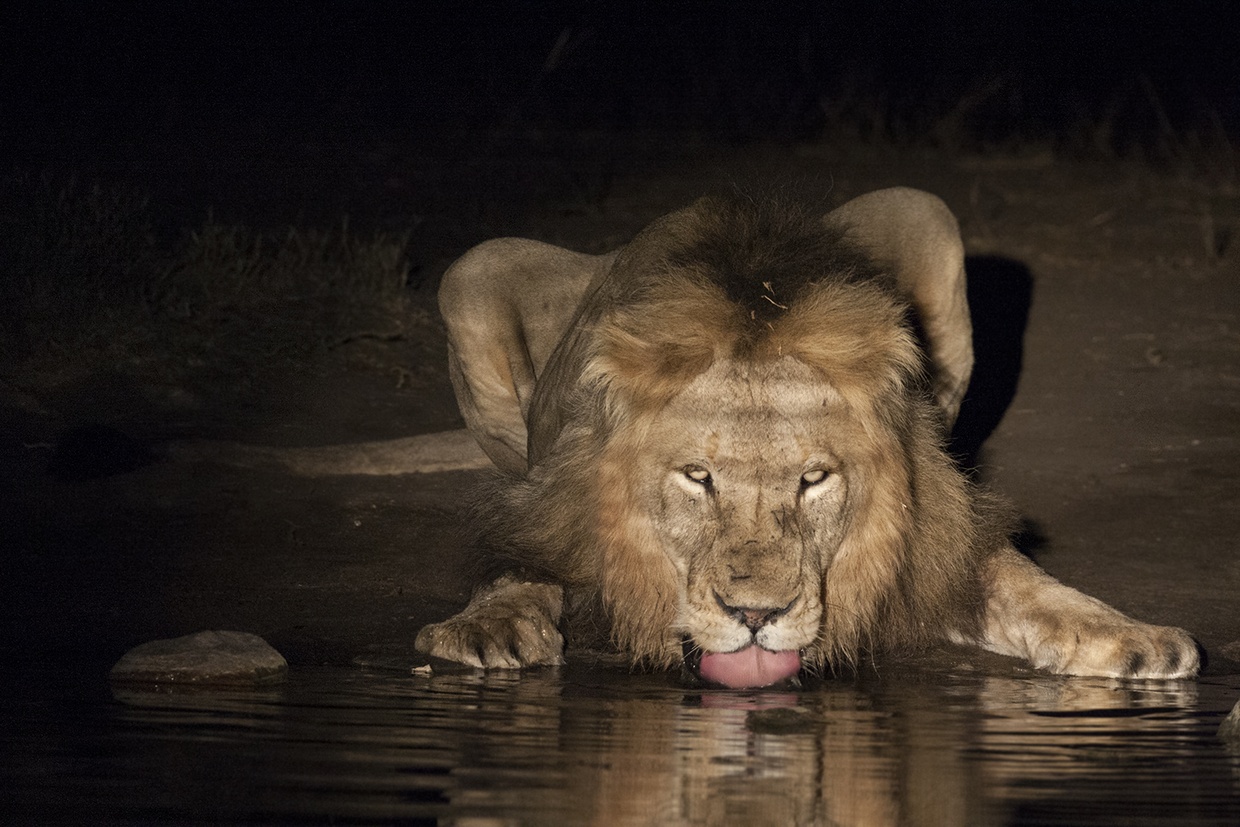 After the males drank, we could hear some buffalo close by which seemed to peek the lions interest just enough to keep them from falling asleep and digesting their meal. With two vehicles in the sighting we were able to get some fantastic back-lit shots of the males which always seems to add a feel of power to these already impressive big cats. 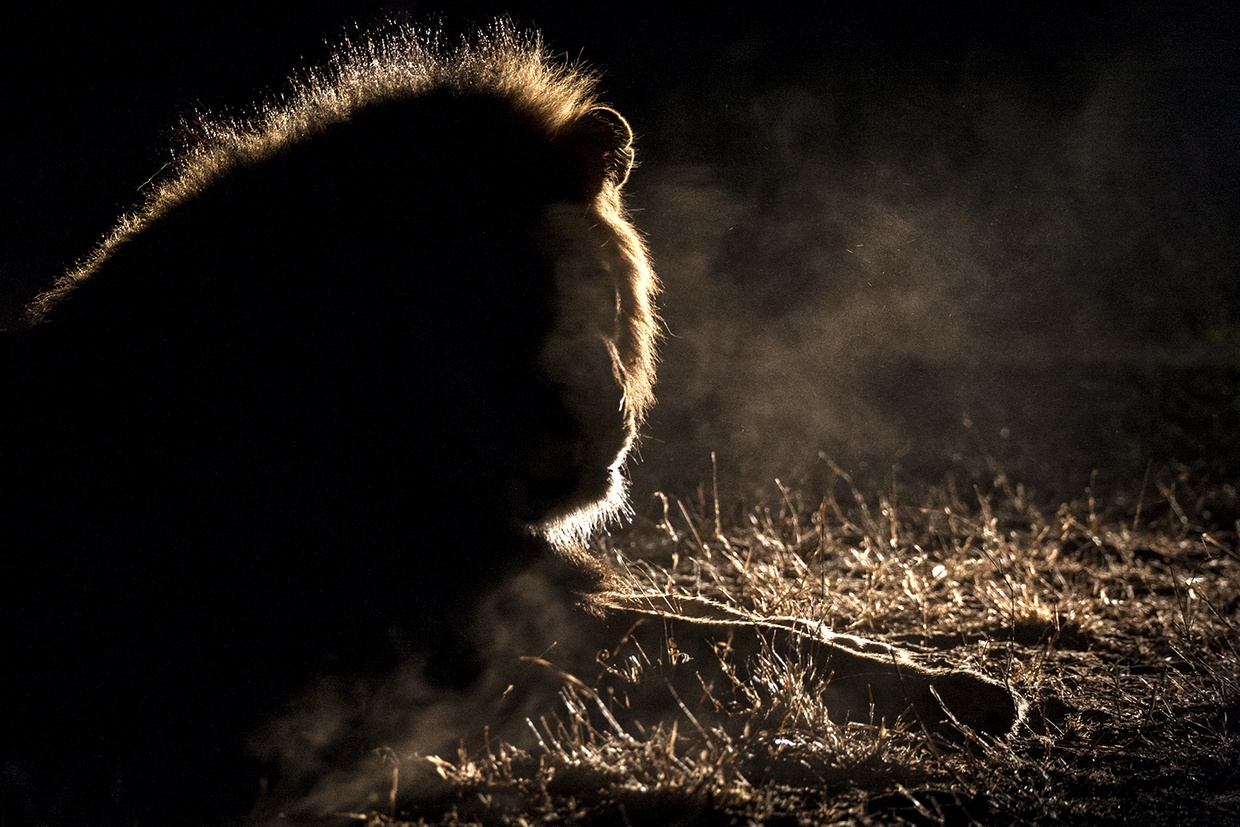 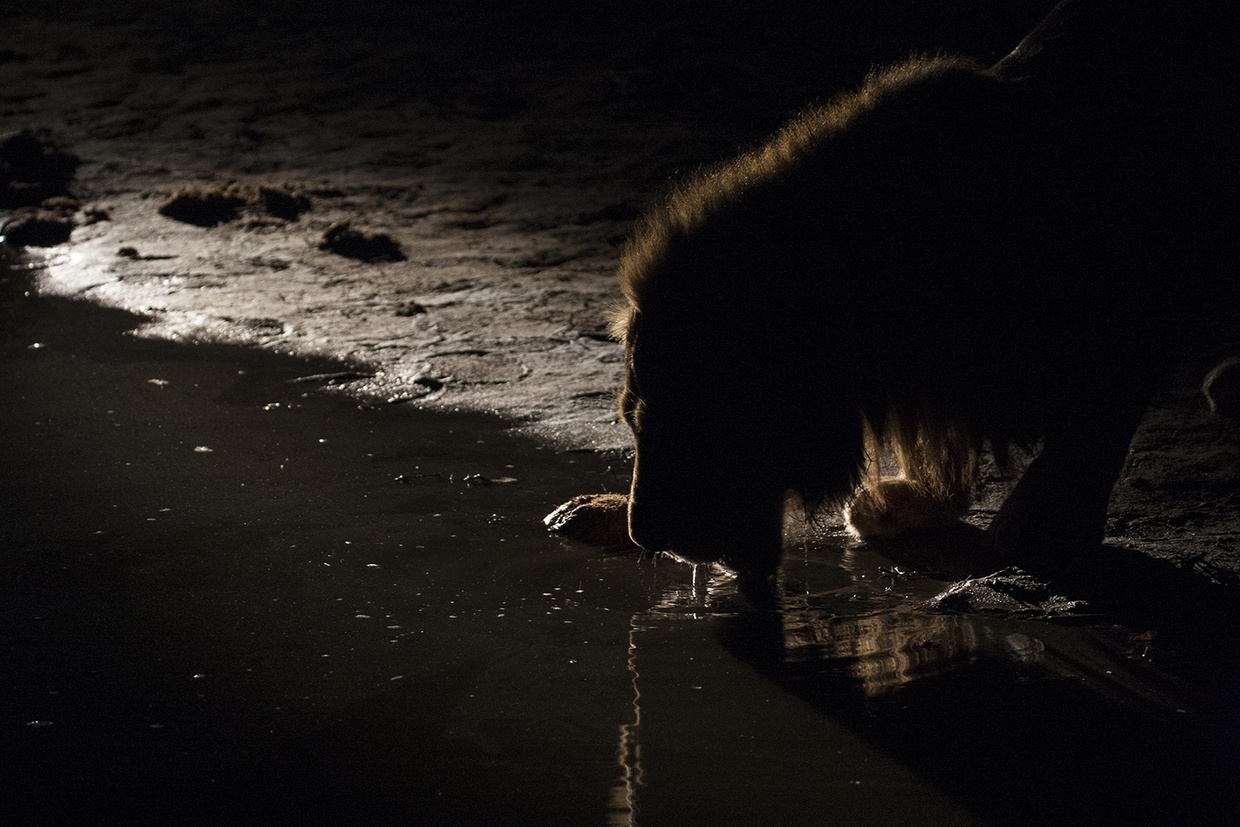 Suddenly out of the darkness the four lionesses from earlier arrived and quickly ran up to the males and greeted them before also heading to the water to slake their thirst. 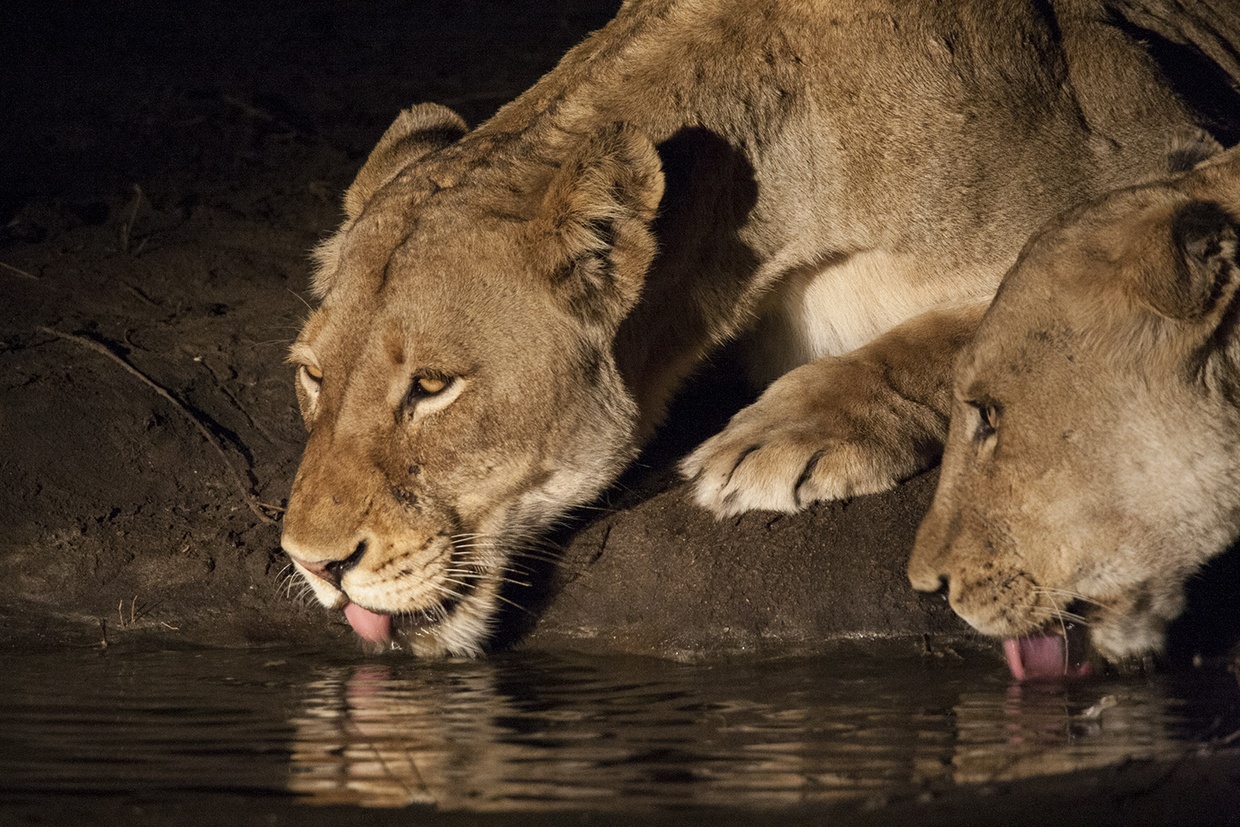 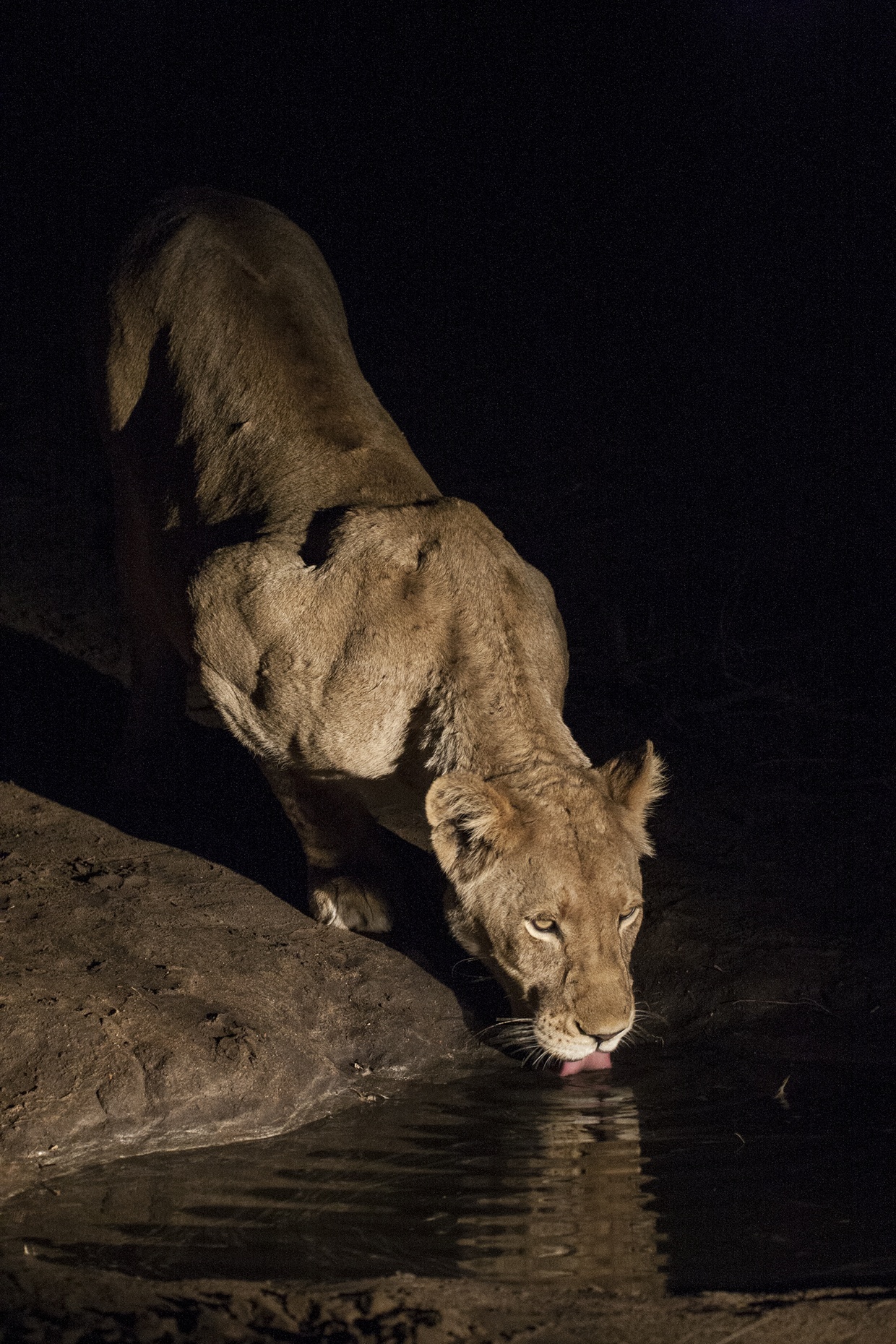 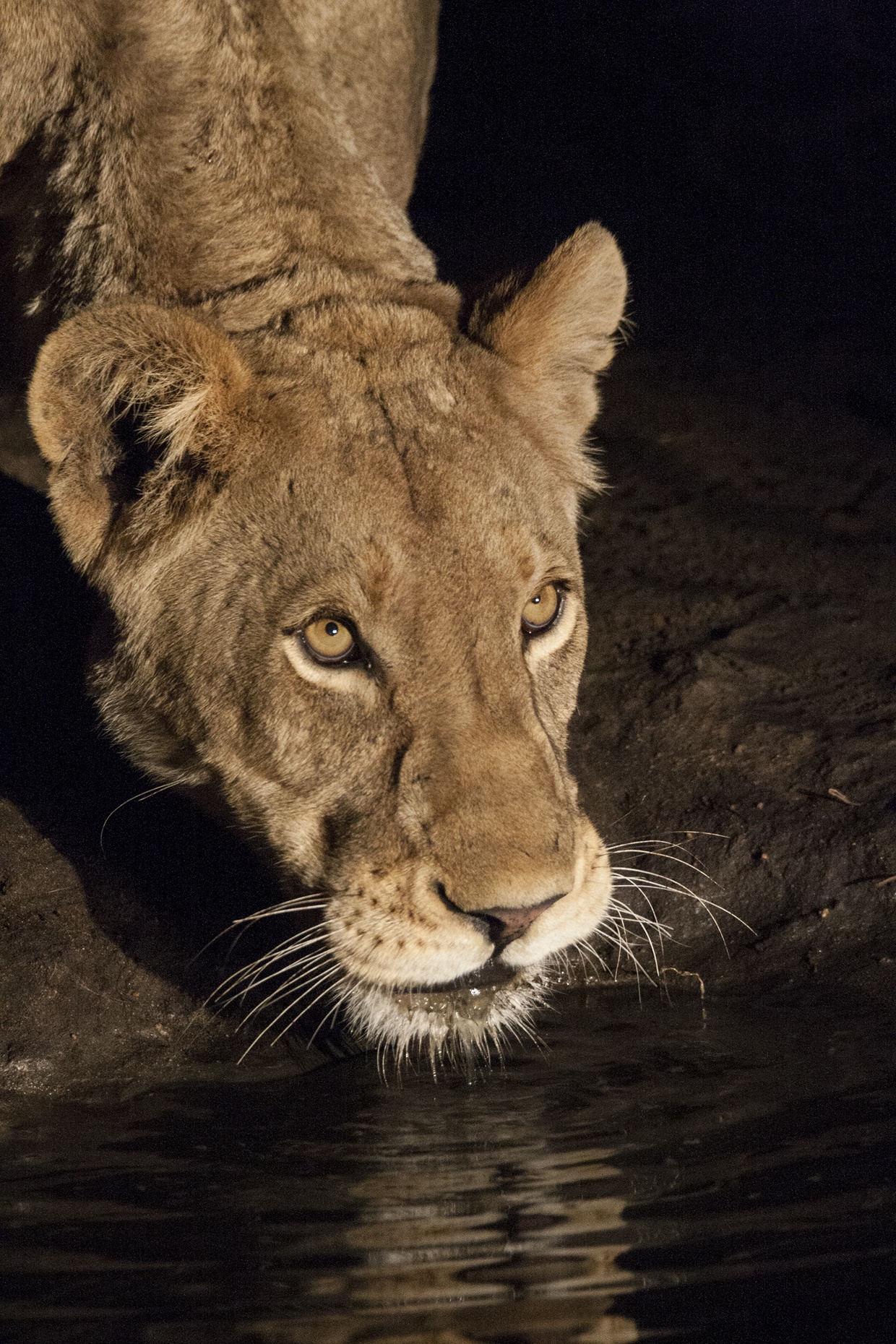 The males then came for another drink before we decided to call it a night and leave the lions flat cat and fast asleep. 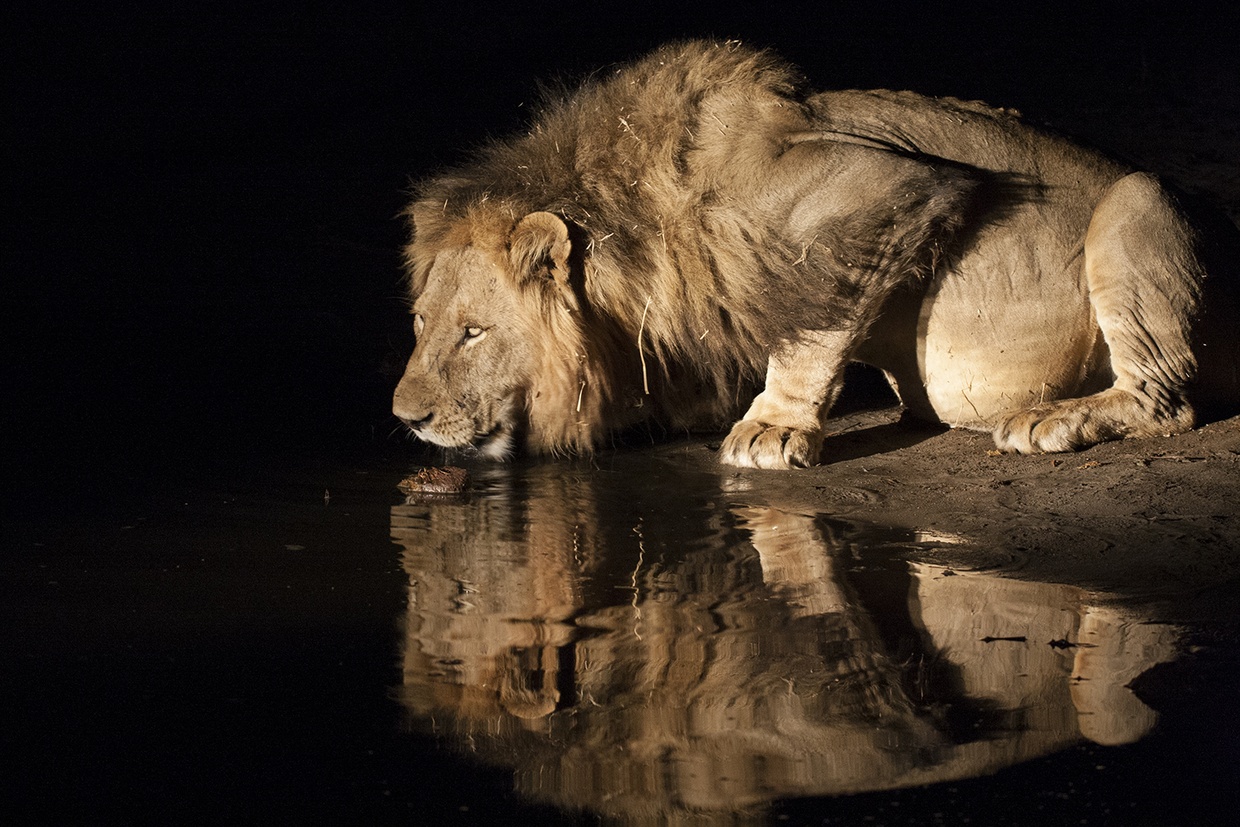 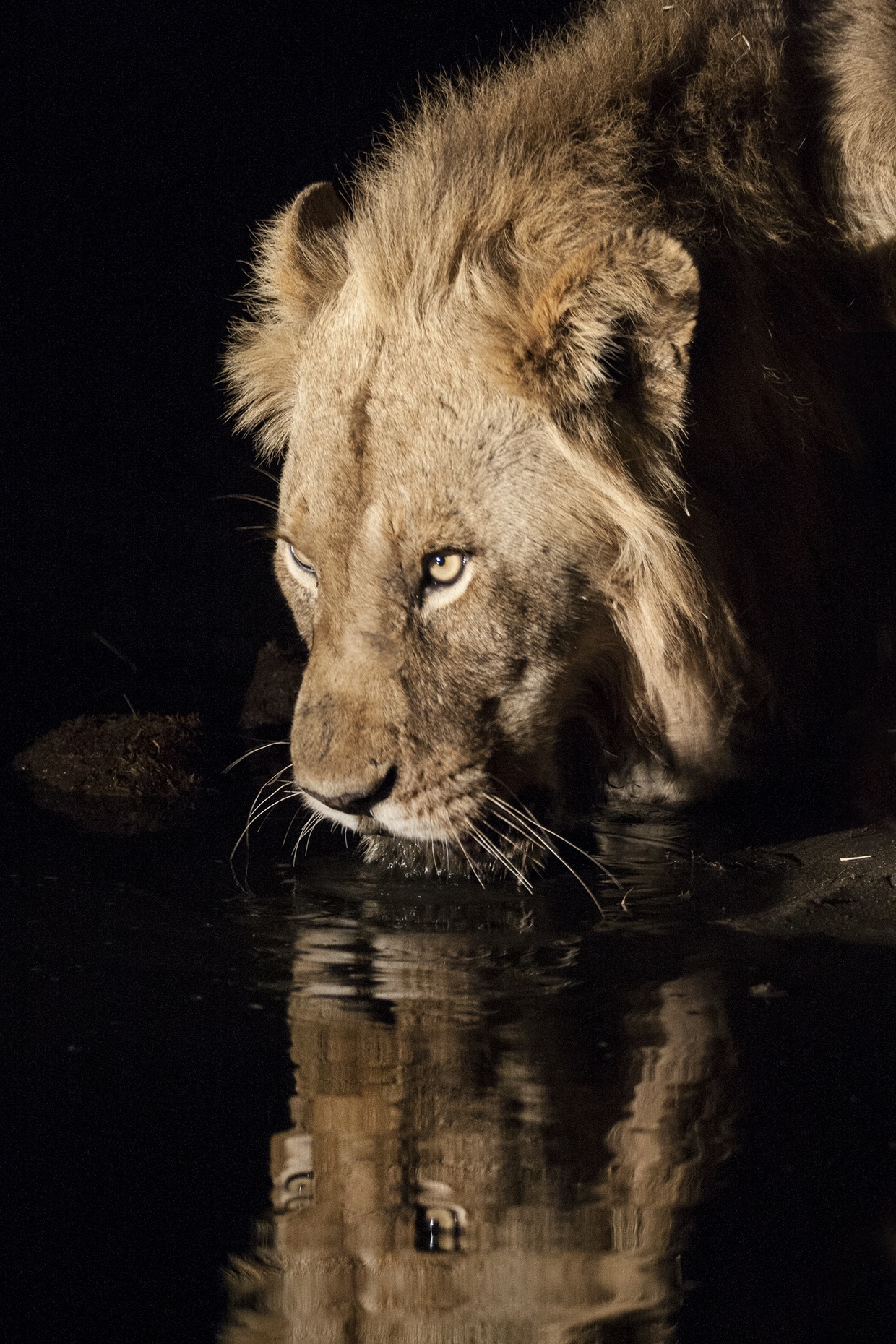 Nights like this when the animals are so close to camp really makes you realize you are in the wilds of Africa, and privileged to be able to witness the things we do.