SIGHTINGS BLOG- The lions and the buffalo 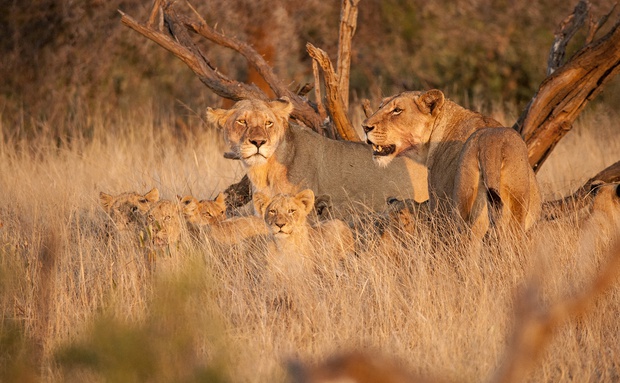 IT IS NOT OFTEN THAT WHEN GUESTS REQUEST TO SEE A KILL WE ARE ABLE TO DELIVER, ESPECIALLY WHEN IT IS NOT JUST ANY KILL THAT THEY WANT TO SEE, BUT WHEN THEY SPECIFY THAT THEY WANT TO SEE THE MOST ULTIMATE SPECTACLE THAT THE BUSH CAN PROVIDE IN THE FORM OF LIONS TAKING DOWN A BUFFALO. WHEN IT COMES TO WITNESSING KILLS A MIXTURE OF PATIENCE, LUCK AND BEING IN THE RIGHT PLACE AT THE RIGHT TIME ALL NEED TO COME TOGETHER AT THE SAME TIME WHICH IN ALL HONESTY DOES NOT HAPPEN ALL THAT OFTEN ALTHOUGH THE ACT OF PREDATORS KILLING HAPPENS ON A DAILY BASIS SOMEWHERE IN THE AFRICAN BUSH.
HOWEVER, WHEN THE GUESTS MADE THIS REQUEST NO ONE EXPECTED WHAT HAPPENED AFTER THAT TO ACTUALLY HAPPEN AND THE LONG TIME DREAM OF WITNESSING THIS EPIC BATTLE BETWEEN AFRICA'S LARGEST CARNIVORE AND AN OPPOSING ADVERSARY IN THE FORM OF THE CAPE BUFFALO TO BECOME A REALITY. HOWEVER IT DID...AND HERE IS THE STORY

Recently we have been fortunate enough to have the entire Myambula pride residing on Umlani's property, a couple of weeks ago a run in with 3 of the young River pride male lions forced the lions to move west away from the males in order to protect their 10 cubs sired by the mighty Mbiri males, this meant that with Marcos dam being one of the only sources of water around that the lions would settle in this area as they will not only have water but also an abundance of prey that are also drawn to the water source. We have enjoyed daily sightings of the pride which meant that the chance of witnessing a kill was greatly increased as the demand for the pride to feed increases with 10 hungry, growing cubs to feed. 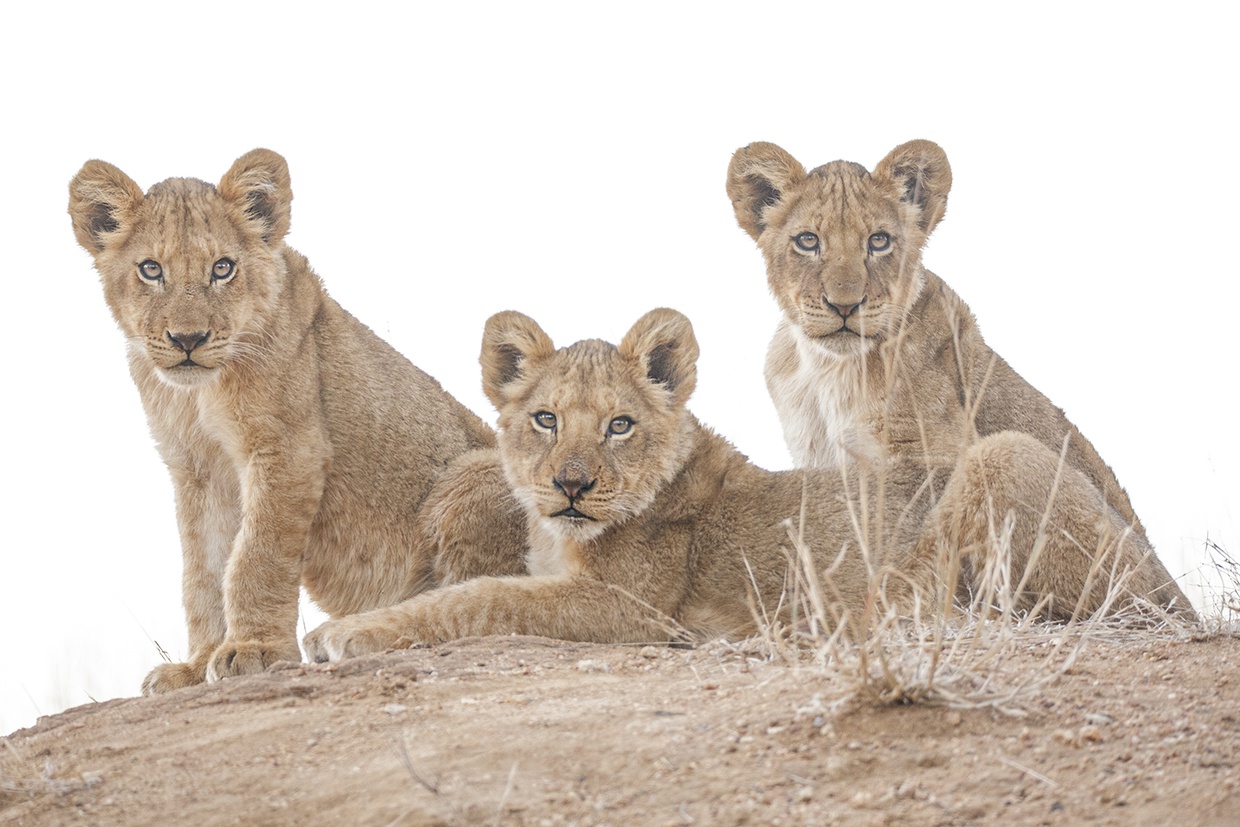 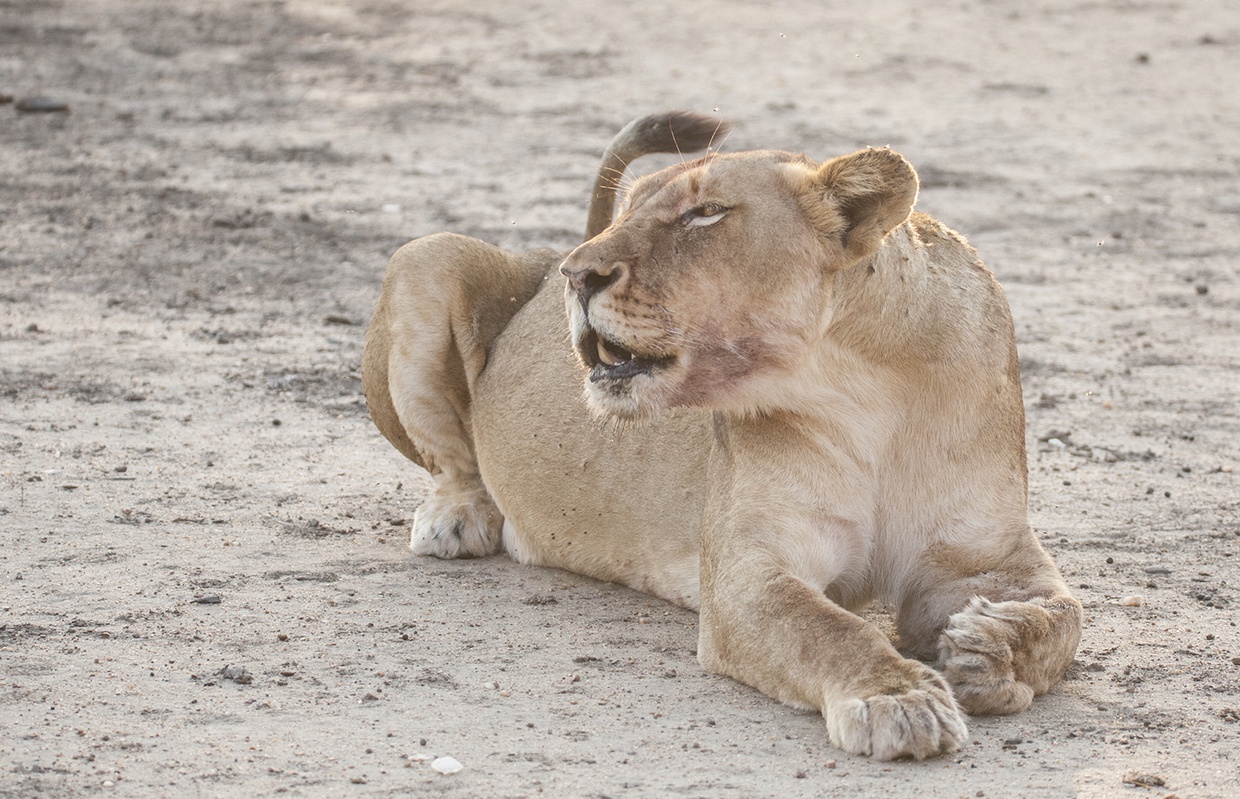 It also just so happens that a small group of male buffalo have also made the area around camp their home due to us having the waterhole in front of camp where they can get their daily dose of water and wallowing in, so the stage was set we just needed luck on our side. One afternoon we thought the the moment had arrived as we watched the four lionesses stalk up to one of these buffalo bulls who was lying down blissfully unaware of the approaching lions as he ruminated peacefully in the late afternoon sun. We sat with baited breath our hearts in our throats as the lions inched closer and closer to their target. However it was not to be when a sudden gust of wind alerted the buffalo to the lions presence and he shot up and charged at the lions sending them scurrying off in all different directions before he too made a hasty retreat to safety. 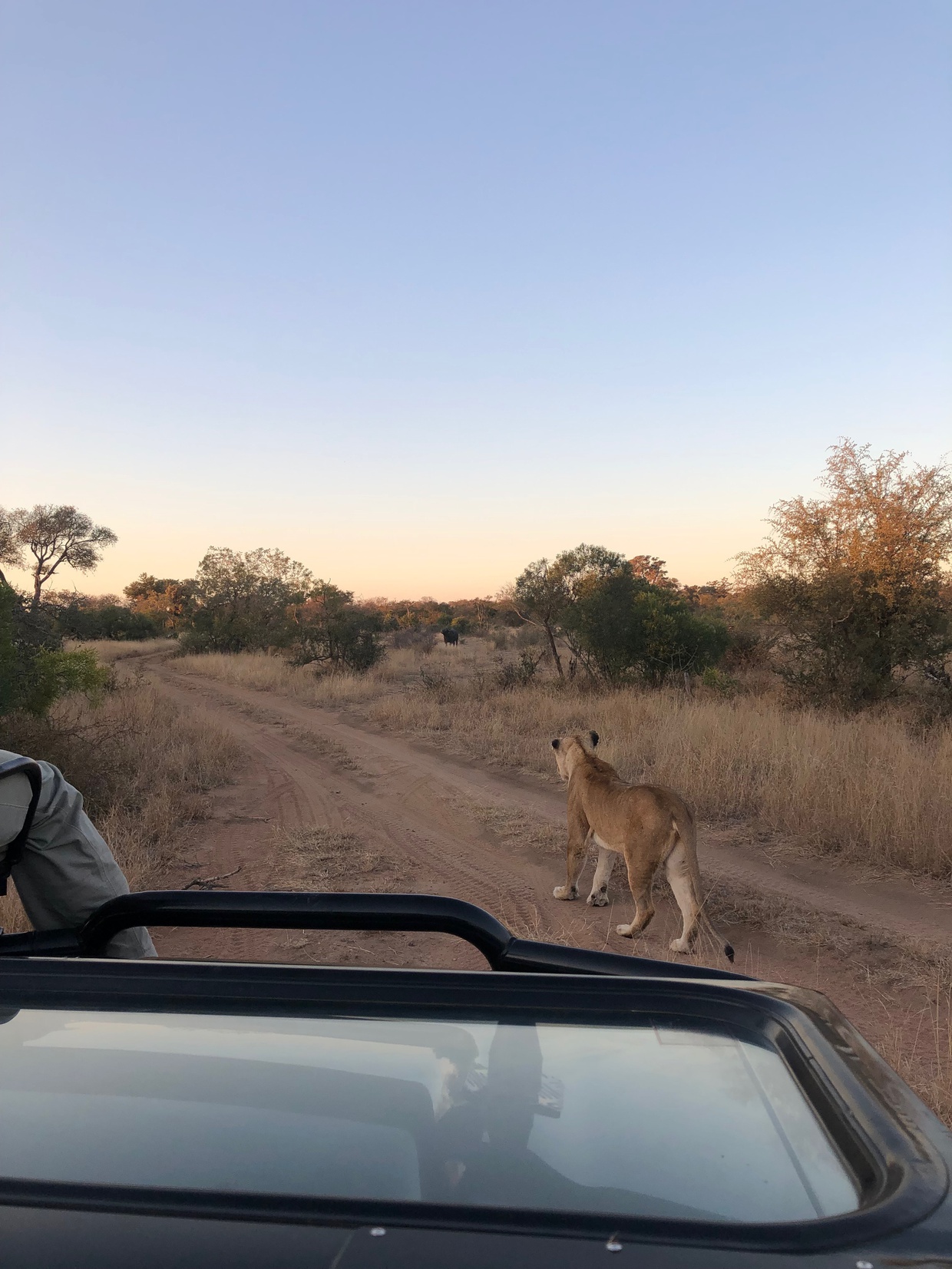 the following afternoon we found all 10 cubs huddled together just next to the road not far from camp, none of their mothers were around this meant one thing...they were on the hunt. So we left the cubs as we do not view them when their mothers are not present at this young age and went in search of the lionesses. Our search was in vain though and we could not locate on the them, and the two Mbiri males had been found so we decided to go see them instead as we had not seen them in some time. 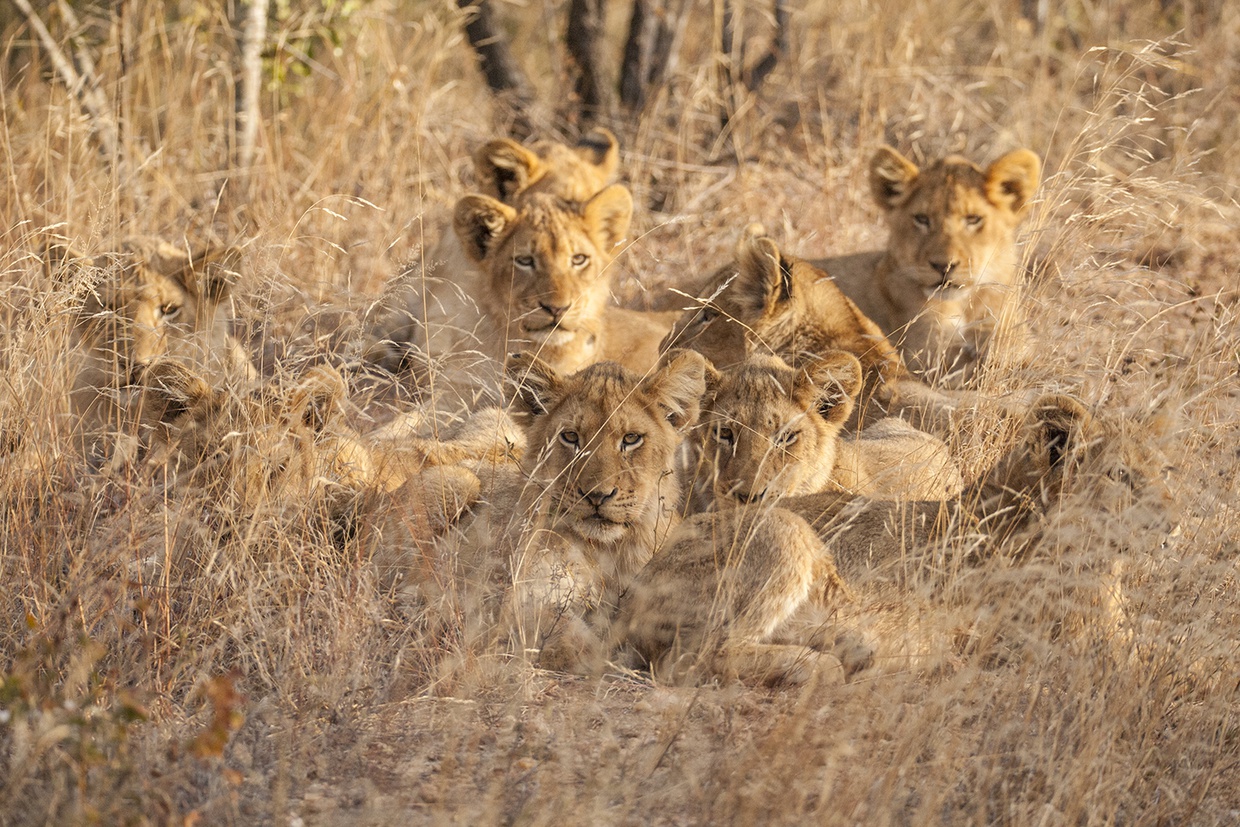 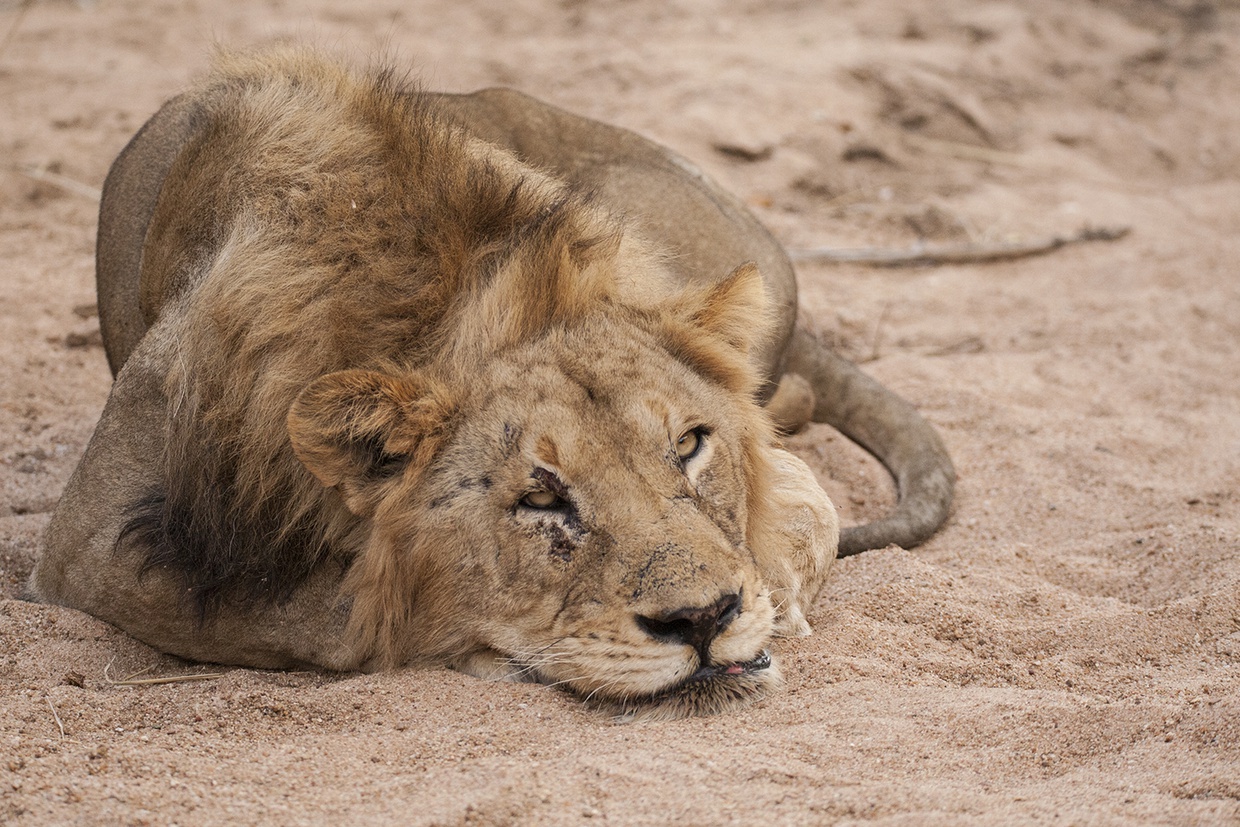 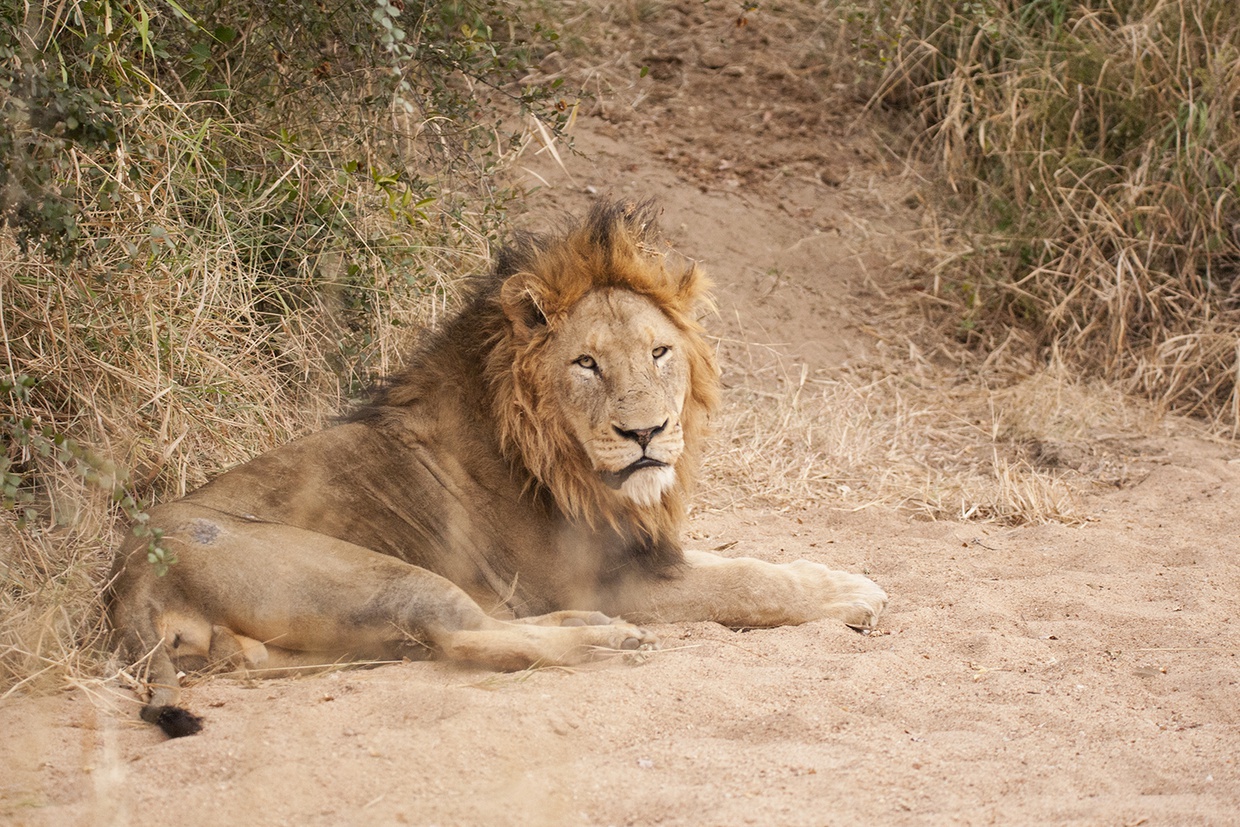 On returning to camp that evening I jokingly said to my guests that I will go and spend the rest of the night looking for the lionesses so that we can see them hunt, and that I will not sleep until I find them. About an hour into dinner service I was up at my house when the bellows of a buffalo in distress echoed through the crisp night air. I immediately knew what was happening and rushed down to the game drive vehicles, calling frantically on the radio for one of the trackers to bring the other vehicle. I ran into the dining room and announced that dinner can wait lions are killing a buffalo and we need to go. My guests at first thought I was joking and that it was in fact just me making the sounds of the buffalo, I assured them that it was not and we all piled into the car and rushed out to locate the action. We found the lions and the buffalo right opposite the camp at our waterhole, the sight of the lionesses on the back of the buffalo, the dust, the sounds from the buffalo were something straight out of a national geographic documentary and the adrenaline of what we were witnessing began coursing through our bodies as we watching in awe of the absolute rawness and power of the scene.

It was incredible to see the strength of the four lionesses as they took turns jumping onto the buffalo's back trying to topple the colossal beast, while the other lionesses bit and chew at the tendons on the hind legs, this was an effective tactic as after some time the hind legs gave in and the buffalo sat down at which point one of the lionesses again lunged onto the back of the buffalo bring him down, she then quickly latched onto the muzzle of the buffalo in order to suffocate him. As the buffalo went down one of the lionesses peeled off and began calling for the cubs and she headed in the direction of where we had seen the cubs earlier that afternoon, while the rest of the pride took turns in suffocating the bull. It took about 45mins before the buffalo eventually took his last breath. The lionesses were all catching their breath after the battle had been won when one of them quickly pricked up her head and stared off to one side and started snarling and growling, we pointed the spotlight in the direction where she was looking and saw the smaller of the Mbiri males making an approach, from their resting place some 6kms away the males must have heard the bellows of the buffalo and made their way for a free meal. The lionesses however did not greet him in the friendliest manner and quickly attacked him before running back to their kill, the smaller Mbiri male was left not really knowing what to do with himself, when the other larger male arrived, interestingly though he was greeted with head rubs and low soft contact calls from the females absolutely no aggression and he was welcomed to the kill. We watched as the lions began to feed when the cubs all arrived and it was then decided that we leave the pride in peace as we do not view the cubs yet with the spotlight due to them still being too young and we didn't want to attract any unwanted attention to the kill in the way of hyenas that could potentially pose a threat to the cubs. 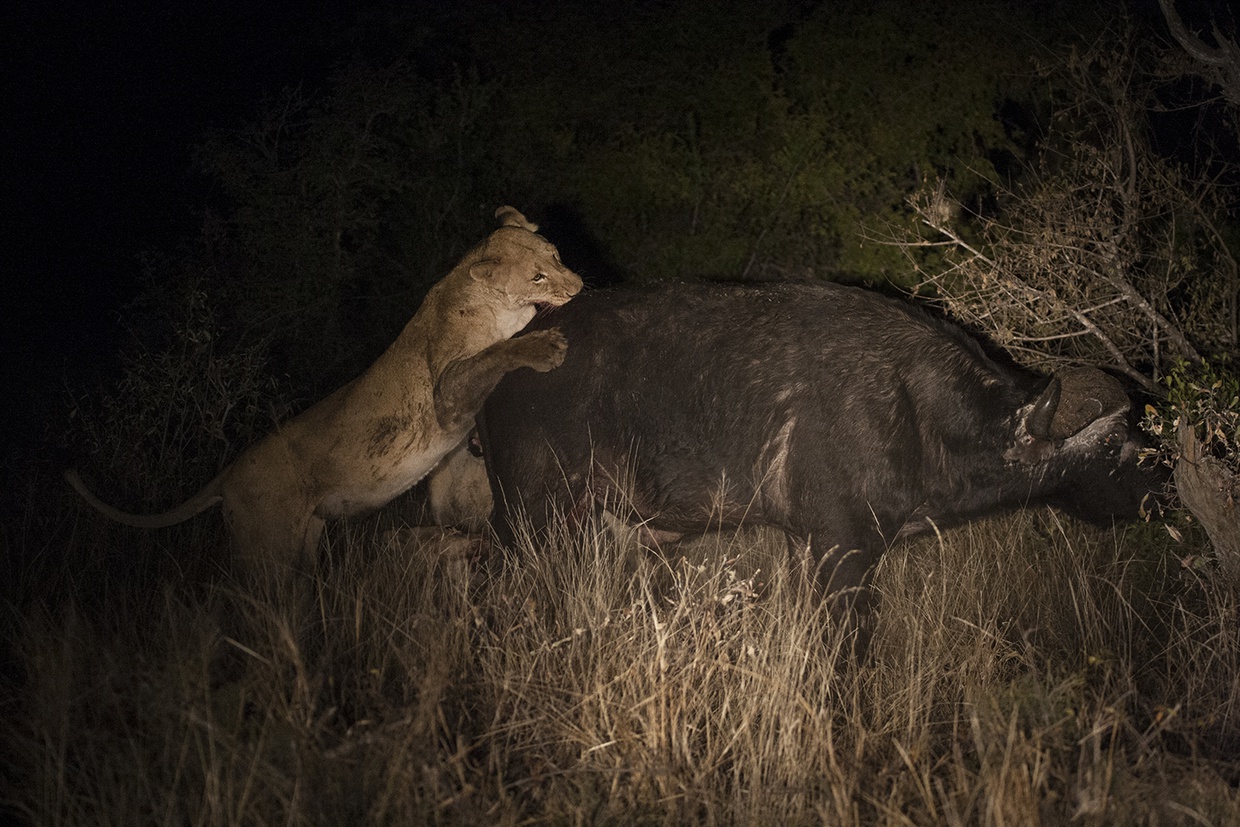 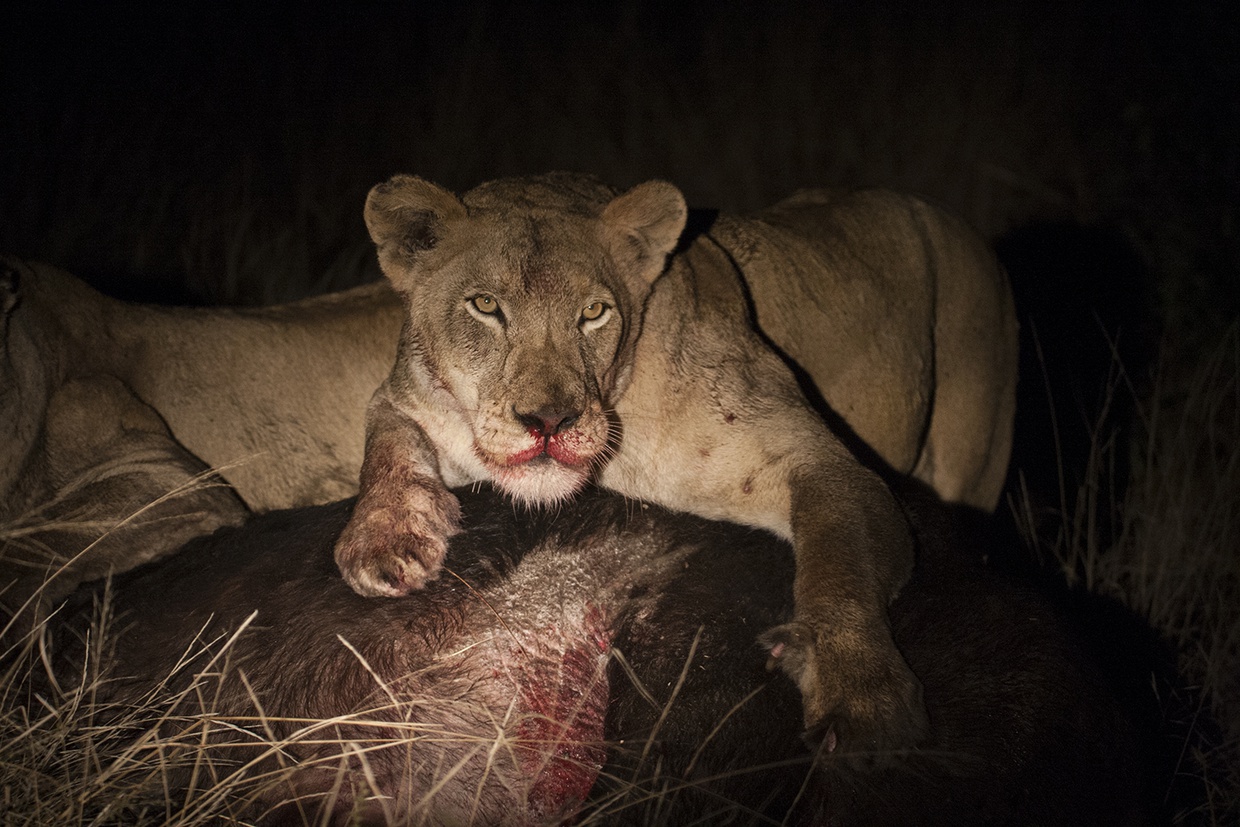 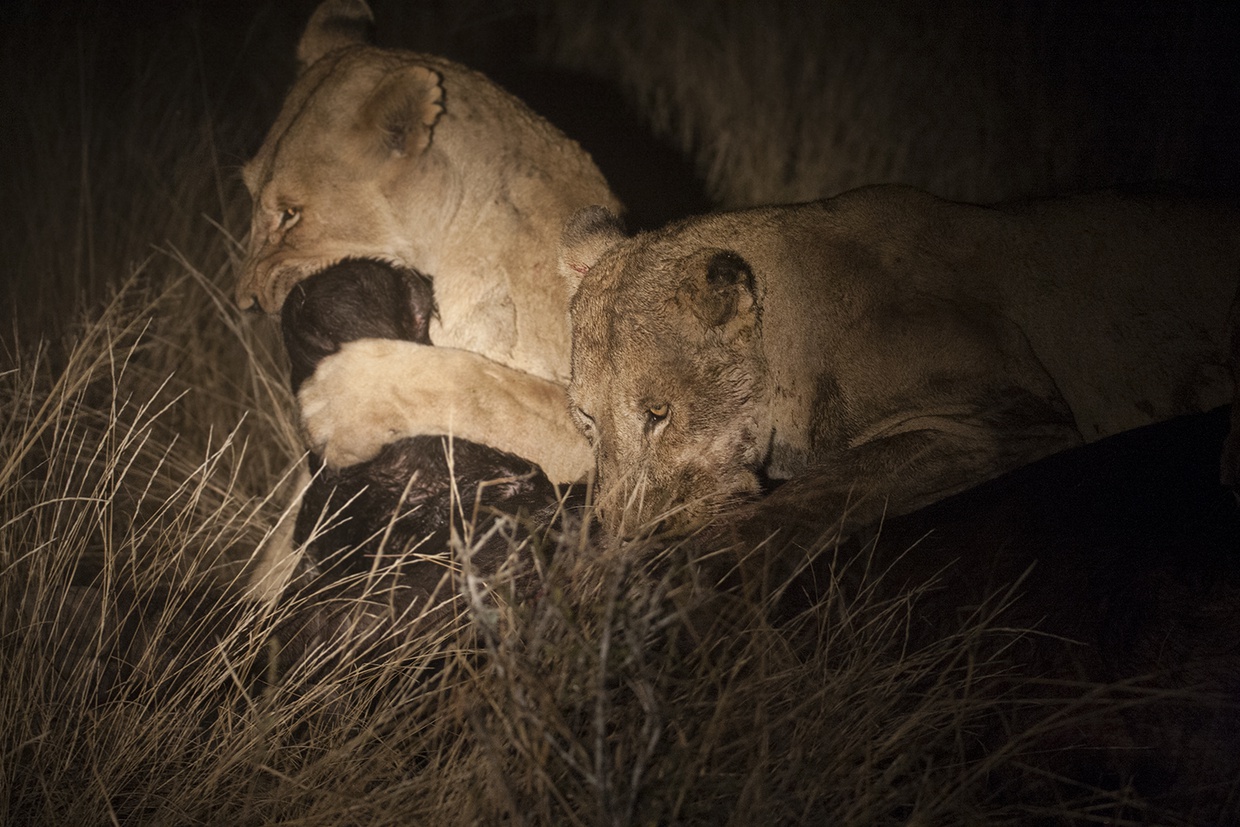 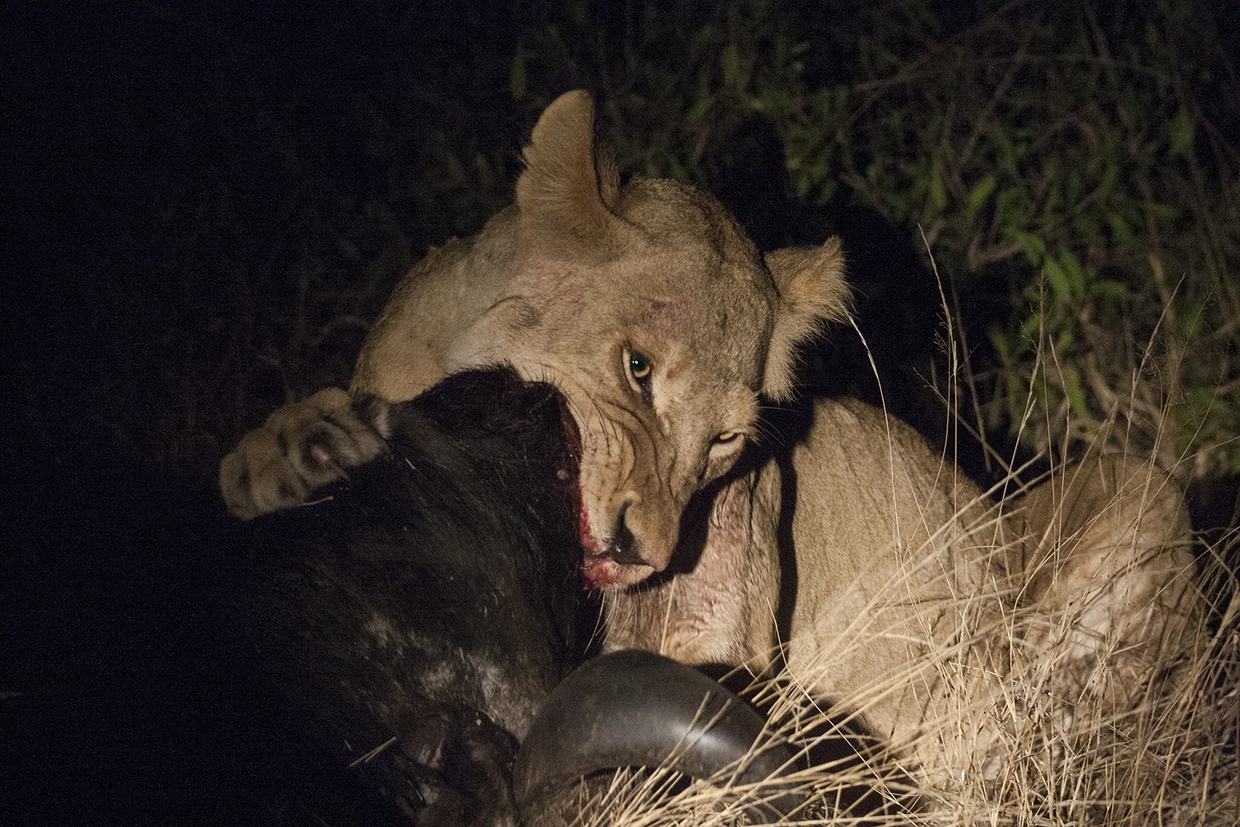 What we had seen was truly remarkable and we headed back to the camp to finish off our own dinner.

In the days that followed we got to witness the progression of the carcass as the lions fed, it's very special to be able to see the whole process from start to finish of nature cleaning up after the kill from the lions bringing the buffalo down to the point where they leave and the hyenas and vultures finish off the rest. A truly once in a lifetime experience for our guests and for some of them an absolute dream come true. 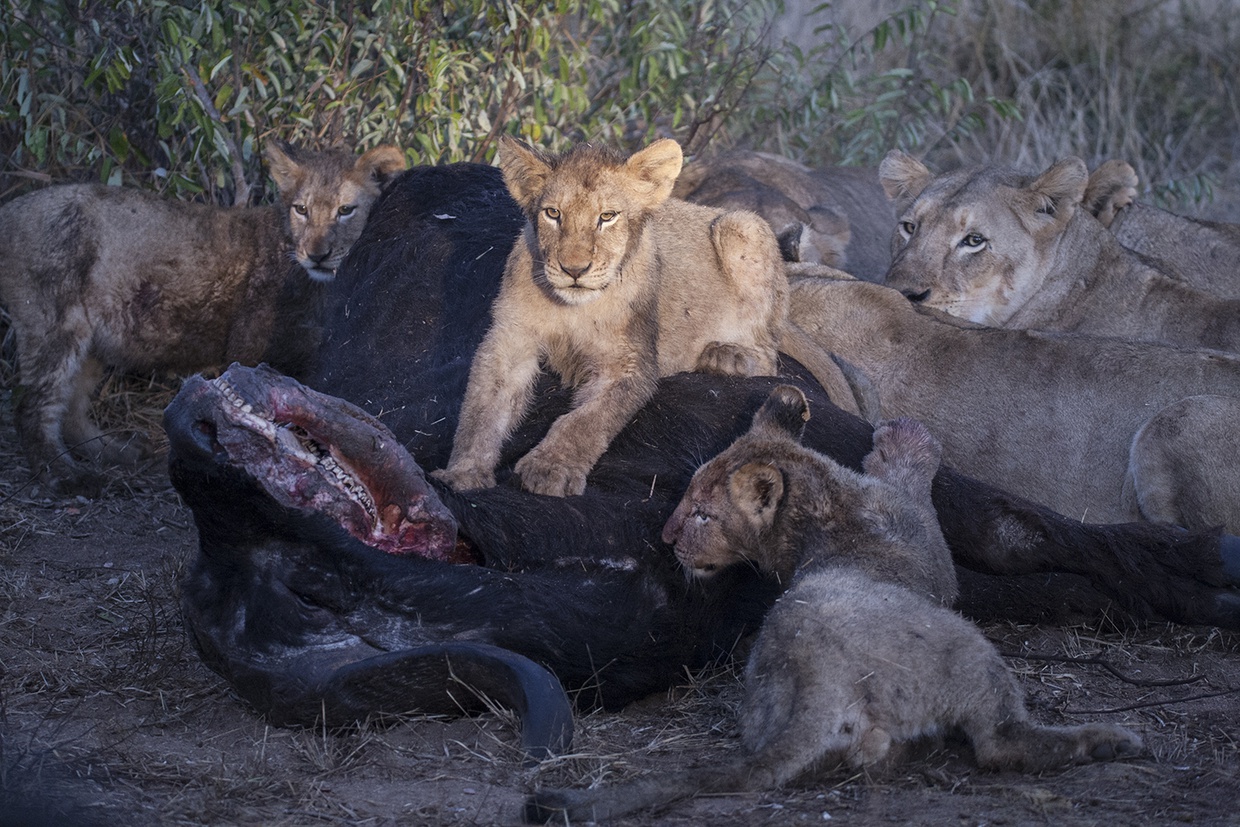 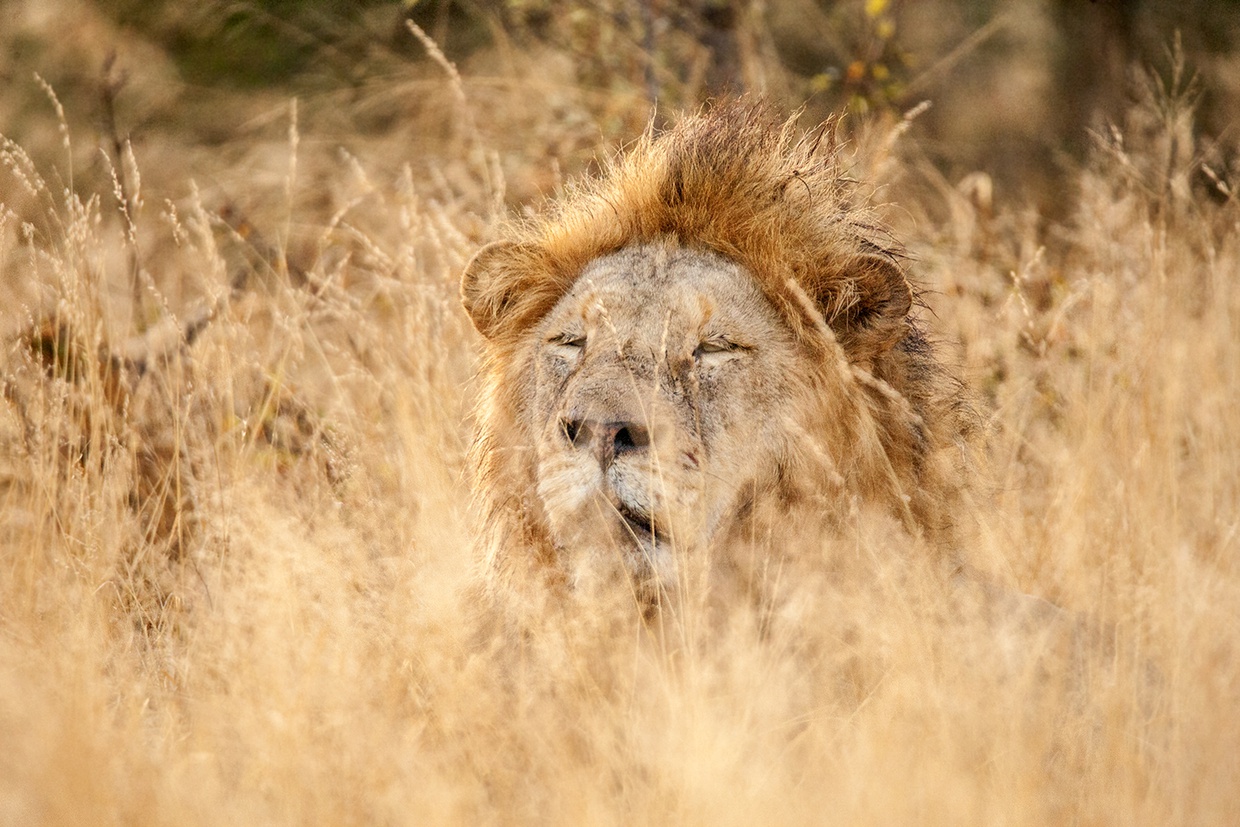 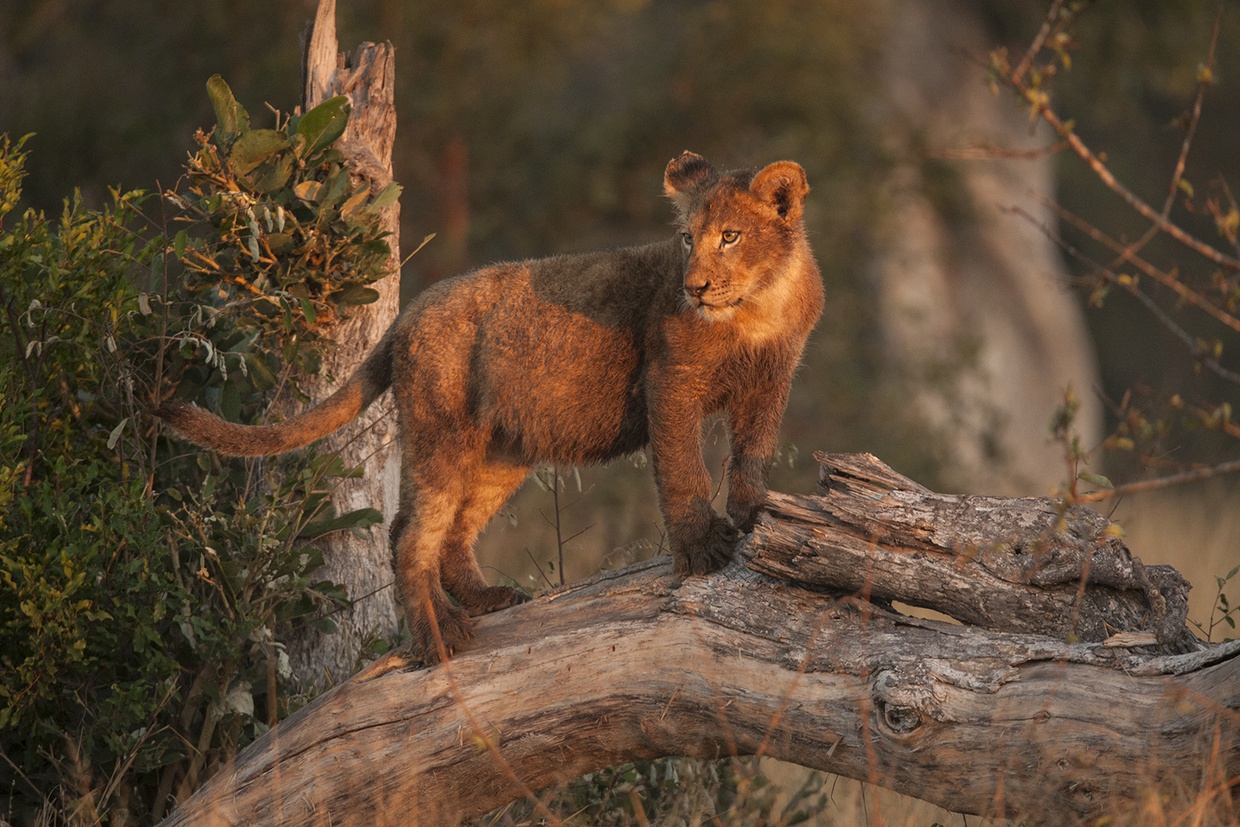 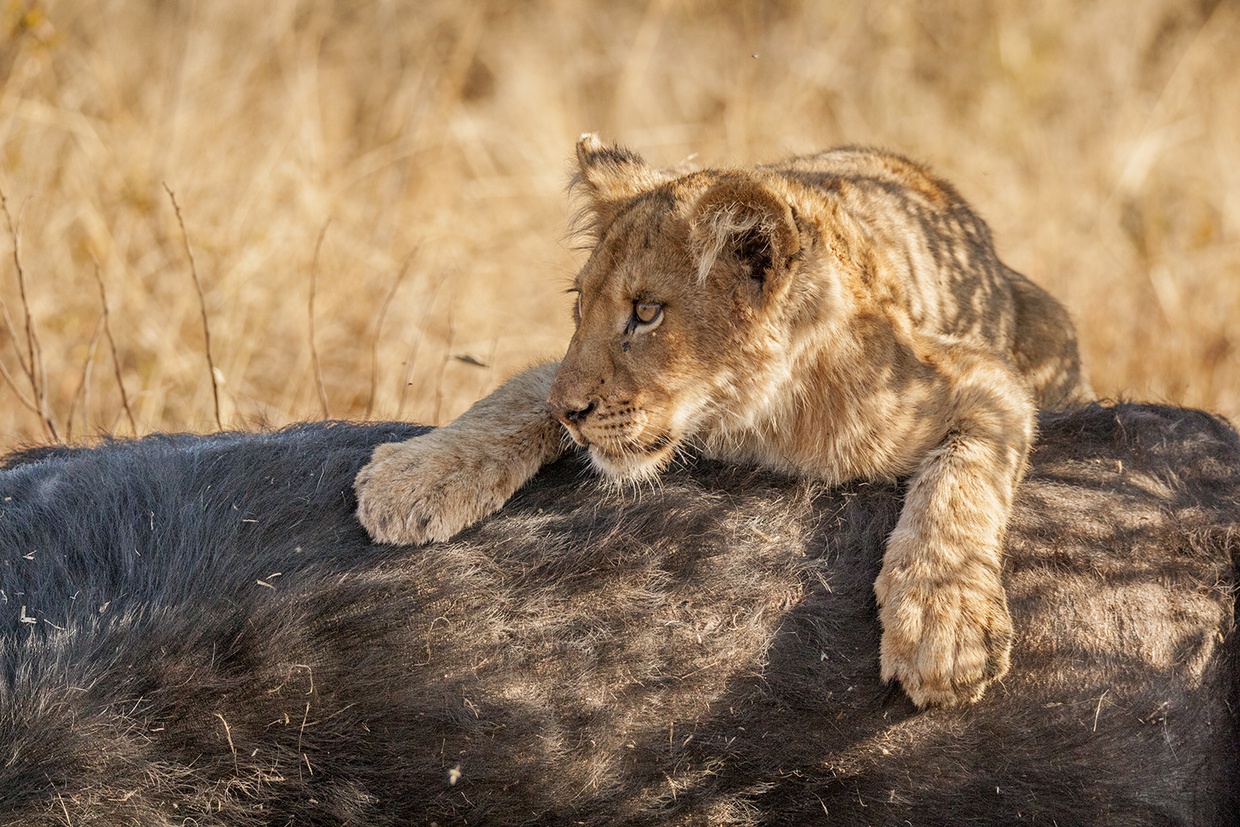 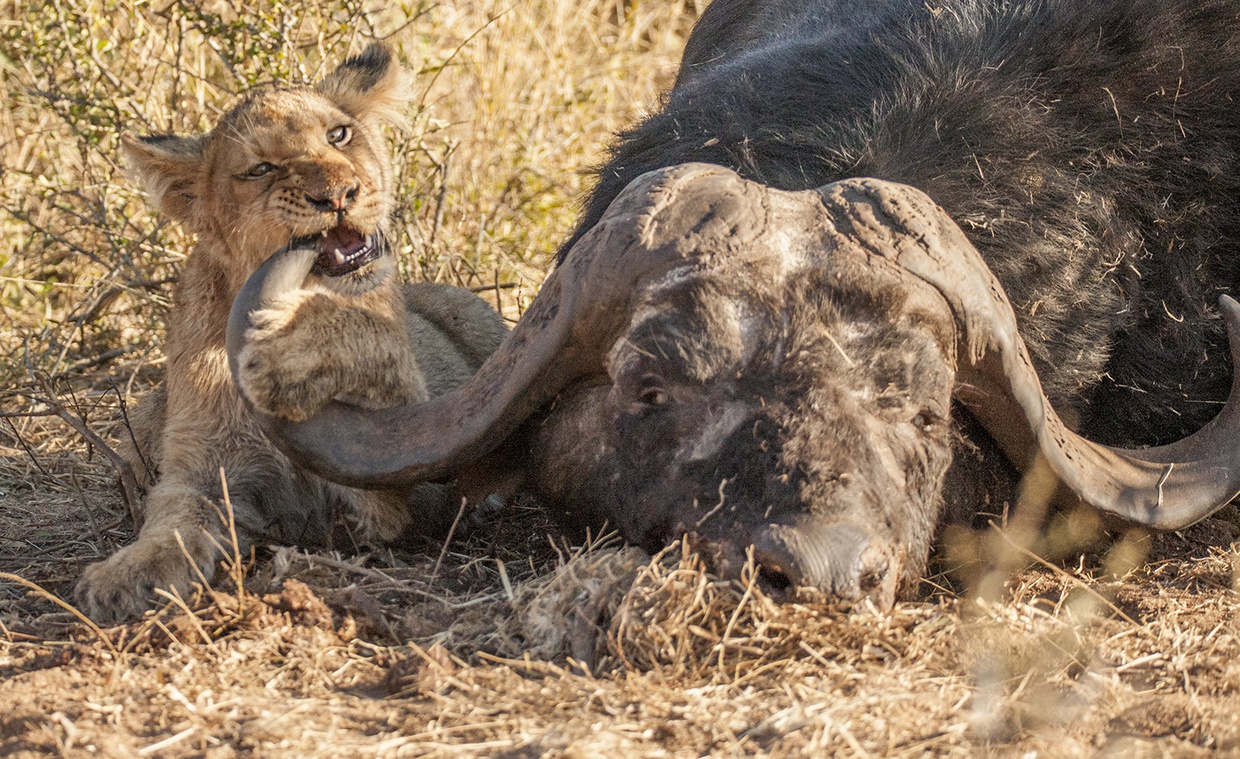 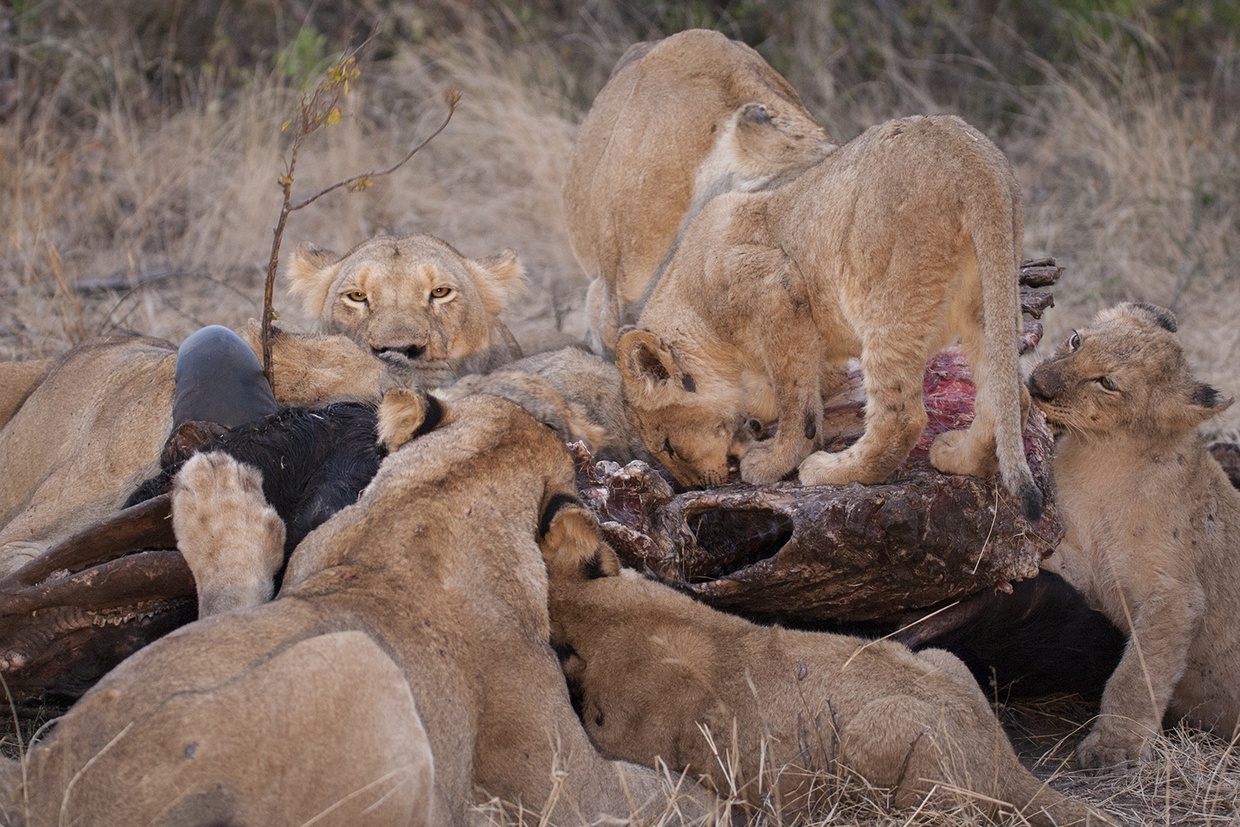 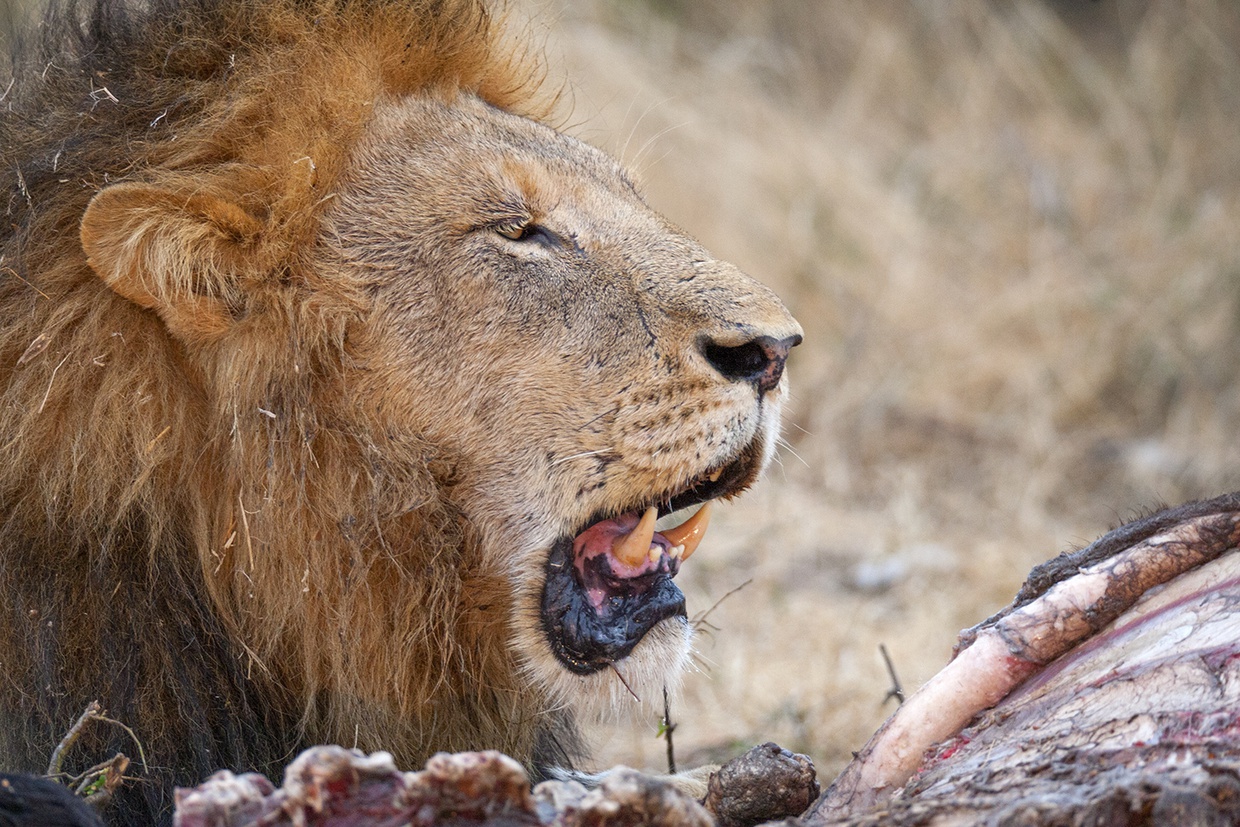 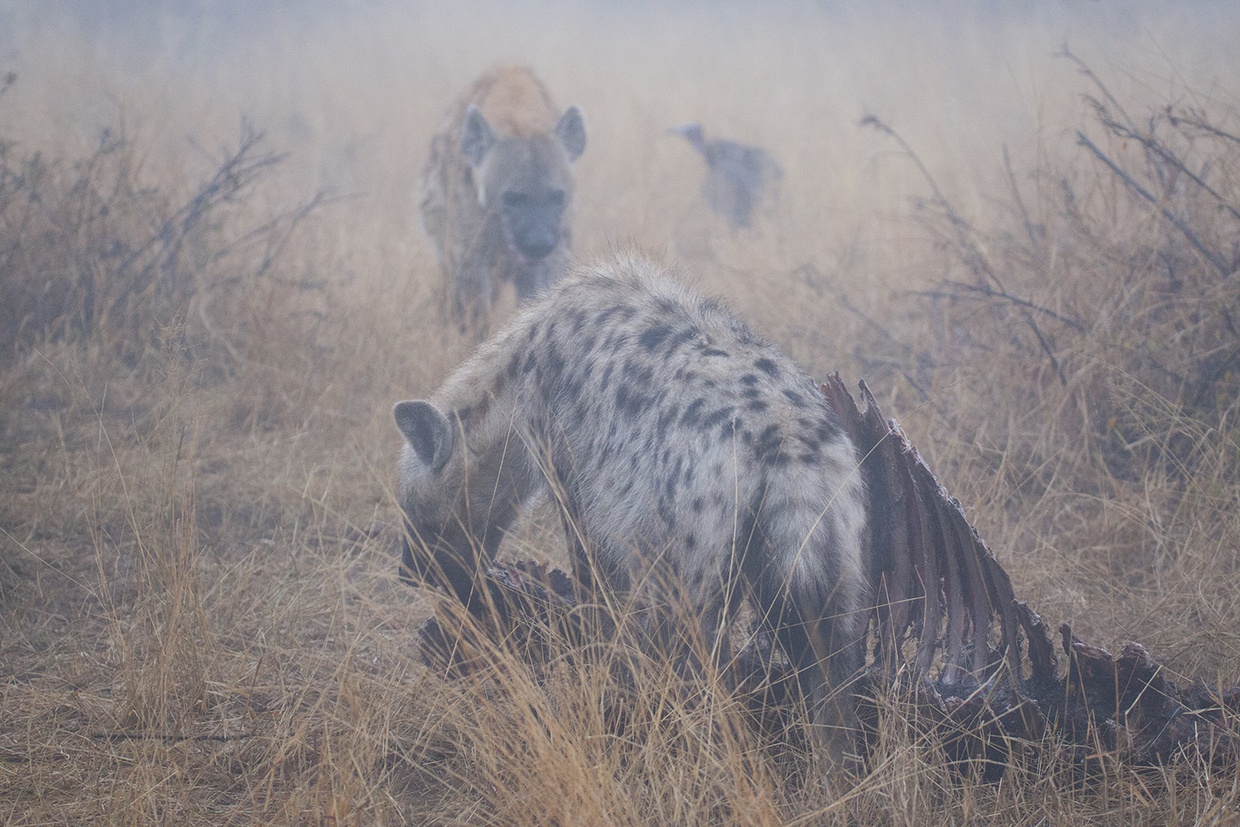 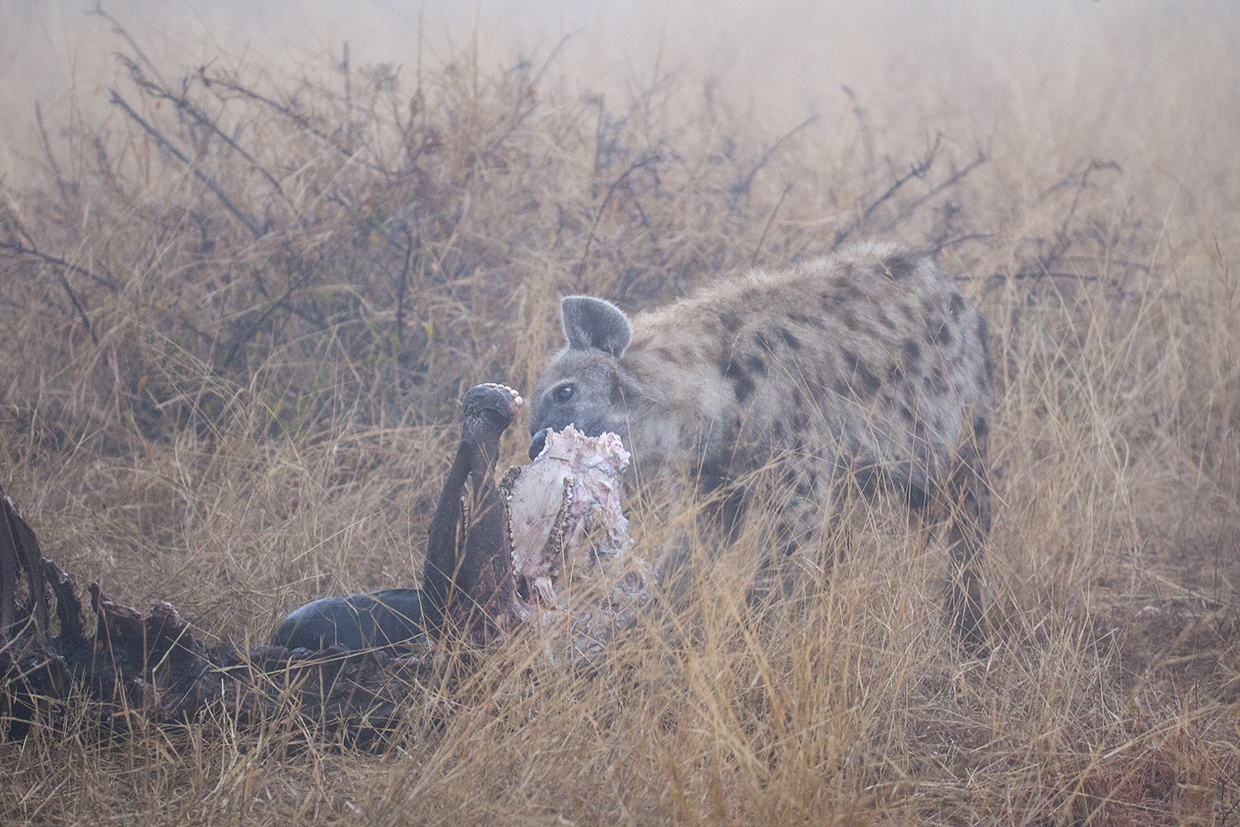 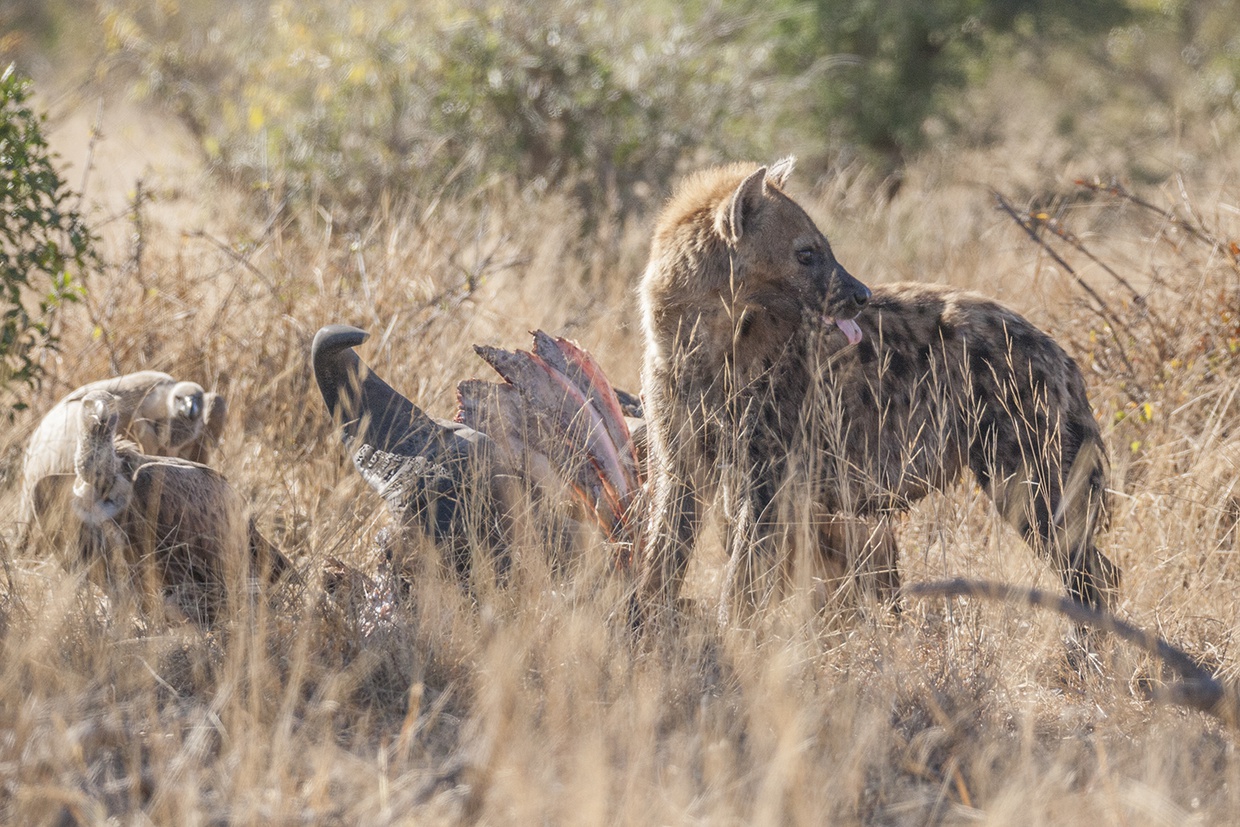 Having a large pride of lions around will always make for interesting sightings, and in the short space of time that this pride has been around we have already racked up some unforgettable sightings and look forward to many more to come.