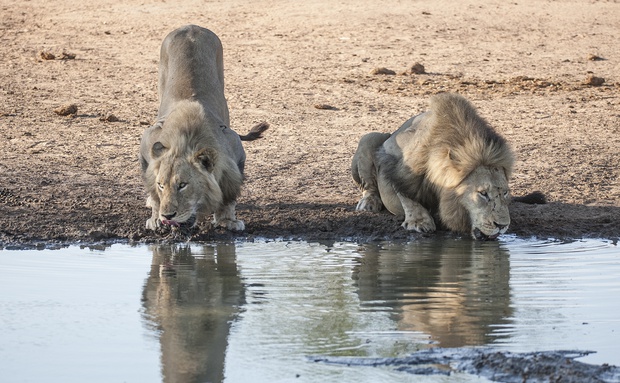 FOR MANY YEARS THE INFAMOUS MACHATTON PRIDE RULED THE CENTRAL TIMBAVATI, AND SIGHTINGS WERE ALMOST A DAILY OCCURRENCE HERE AT UMLANI. BUT IN NATURE NOTHING LASTS FOREVER AND THE DAY CAME WHEN THE PRIDE BECAME A MEMORY AND THEIR TRACKS NO LONGER APPEARED ON THE ROADS FOR OUR GUIDES AND TRACKERS TO FOLLOW ONCE THE LAST LIONESS PASSED AWAY LAST YEAR. THIS LEFT A VOID FOR NEW LIONS TO MOVE INTO PRIME LION REAL ESTATE, THIS IS NECESSARY TO ENSURE NEW FRESH GENES ARE CARRIED INTO AND AREA TO ALLOW DIVERSITY AND STRONG HEALTHY POPULATIONS OF THESE ICONIC BIG CATS. FOR MONTHS WE HAD LIONS COMING AND GOING AND NOT REALLY SETTLING BUT EXPLORING THE AREA. THAT WAS UNTIL THE 2 LIONESSES THAT ARE NO KNOWN AS THE ZEBENINE PRIDE ARRIVED AND MADE IT THERE HOME, COUPLED WITH THE MBIRI MALES THE PRIDE HAS GROWN BY TWO AND HAVE REALLY SETTLED IN NICELY, AND HAVE BROUGHT OUR LION SIGHTINGS BACK FROM HARDLY SEEING LIONS TO SEEING THEM MORE OFTEN THAN NOT.

Over the last couple of months as the two cubs grow the pride has become more mobile no longer needing to keep the little ones hidden as they are big enough to move with the pride, the lions have been moving throughout their vast territory and have been exceptionally successful at hunting and providing regular meals not only for the growing cubs but for the 2 dominant males as well. With the many sightings we have had of this pride a few really stand out and these are the sightings I would like to share with you in this blog.

The first one happened early one morning, the Zebenine pride had killed a buffalo not far from camp, we headed straight there to see if the lions were still there only to find a couple of vultures and a Black backed jackal sniffing around where the buffalo carcass was, and there was no sign of the lions. We decided to head to a nearby dam, usually after a big meal that would be where lions would go, so off we set. we hadn't gotten far from the kill scene when we caught a glimpse of the lions on the move so we headed in to get a closer look and enjoyed multiple walkbys from the pride as the B-lined towards the waterhole.

Golden sunlight and bigcats filled our camera screens as we could pick and choose angles to get the best photos. Once everyone was happy we thought it would be a good idea to go wait at the water for the lions to come and have a drink. We positioned the vehicle opposite to where we thought the lions would drink and as if we had told them before hand one by one they arrived at the waters edge exactly at the spot we had predicted. Again the camera shutters worked overtime as the magical scene unfolded for us, from both males drinking side by side to the cubs and their mom it truly was an unforgettable sighting. It was only once the lions had finished slaking their thirst that we decided to leave them to digest their meal in the shade of one of the trees lining the waters edge. 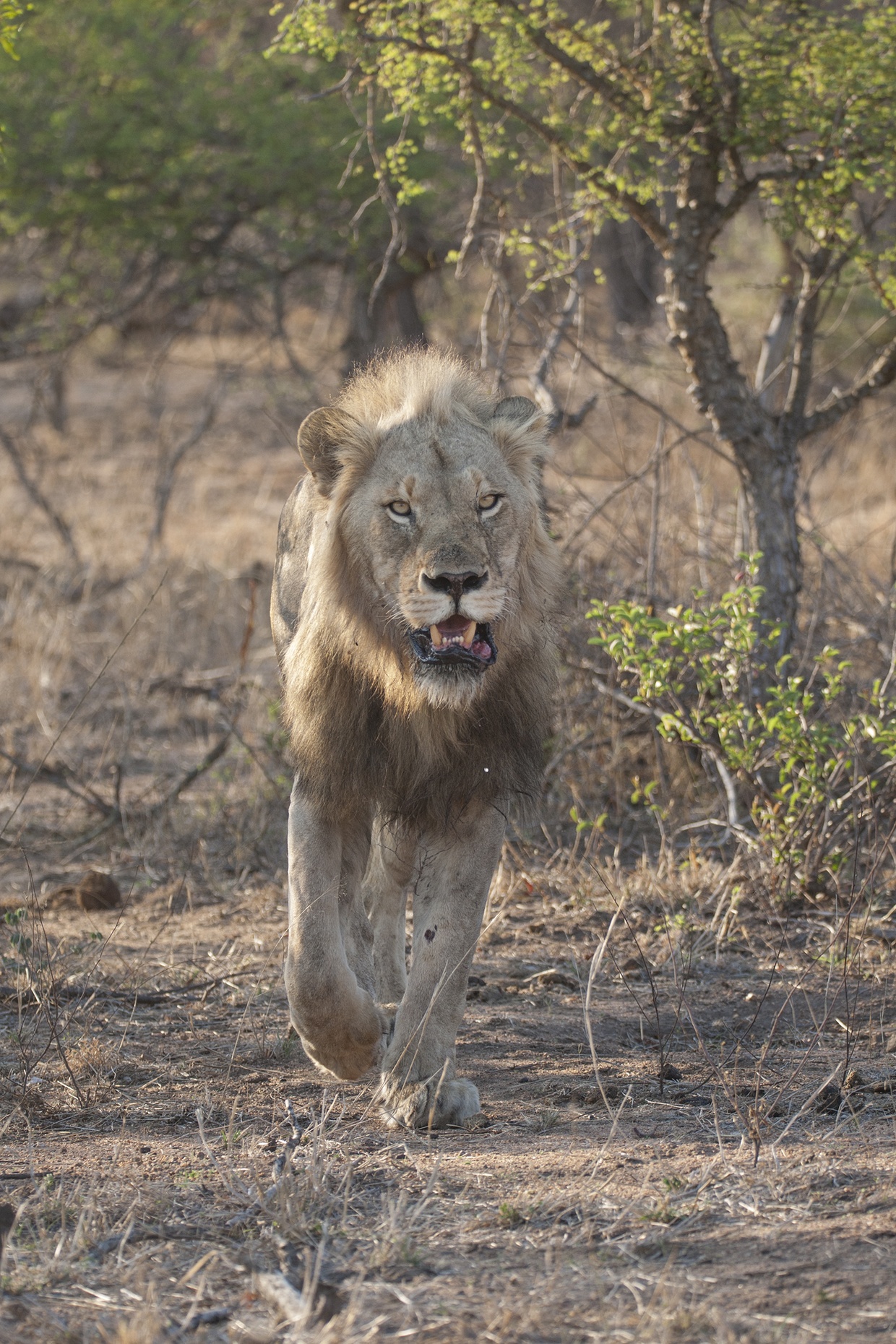 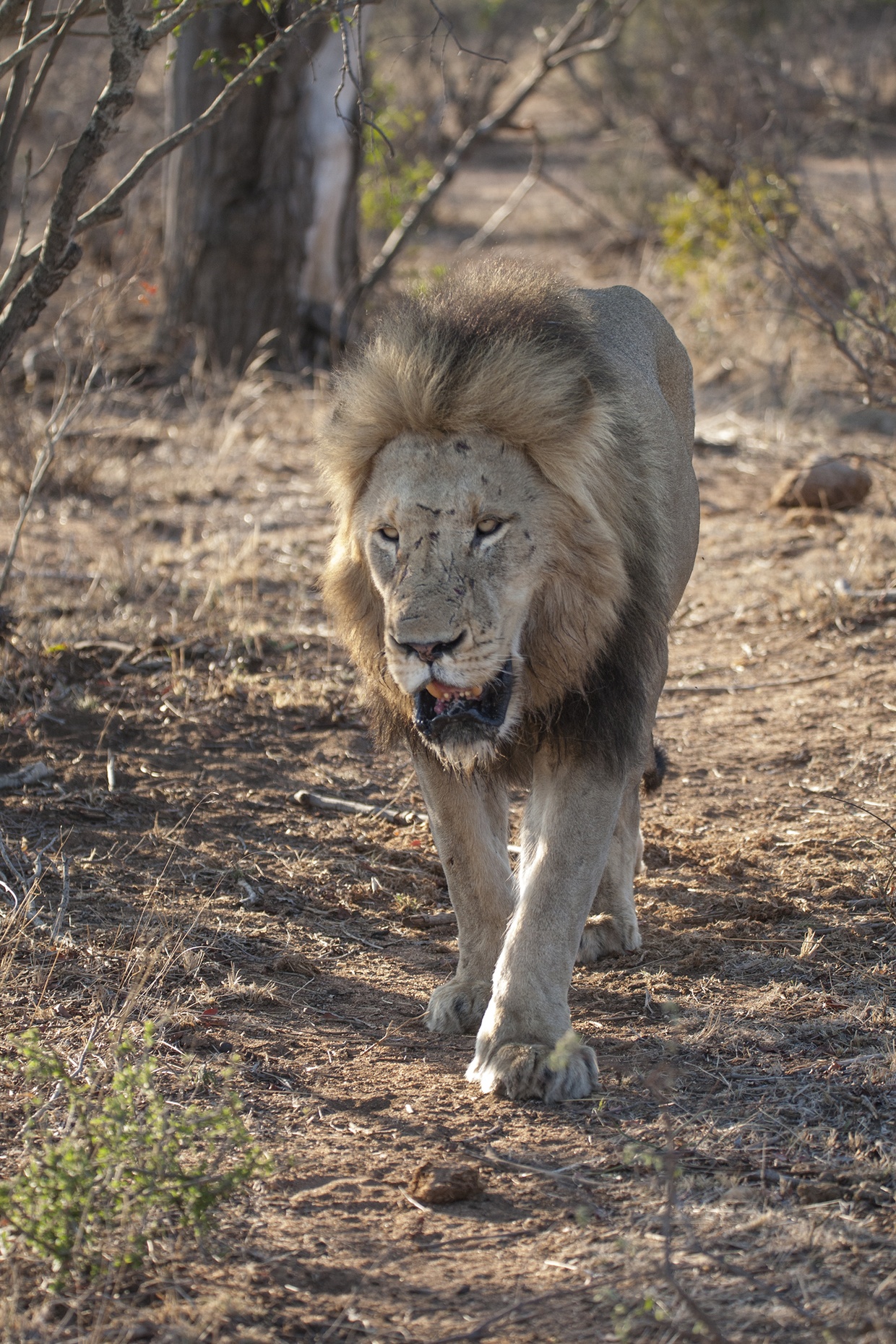 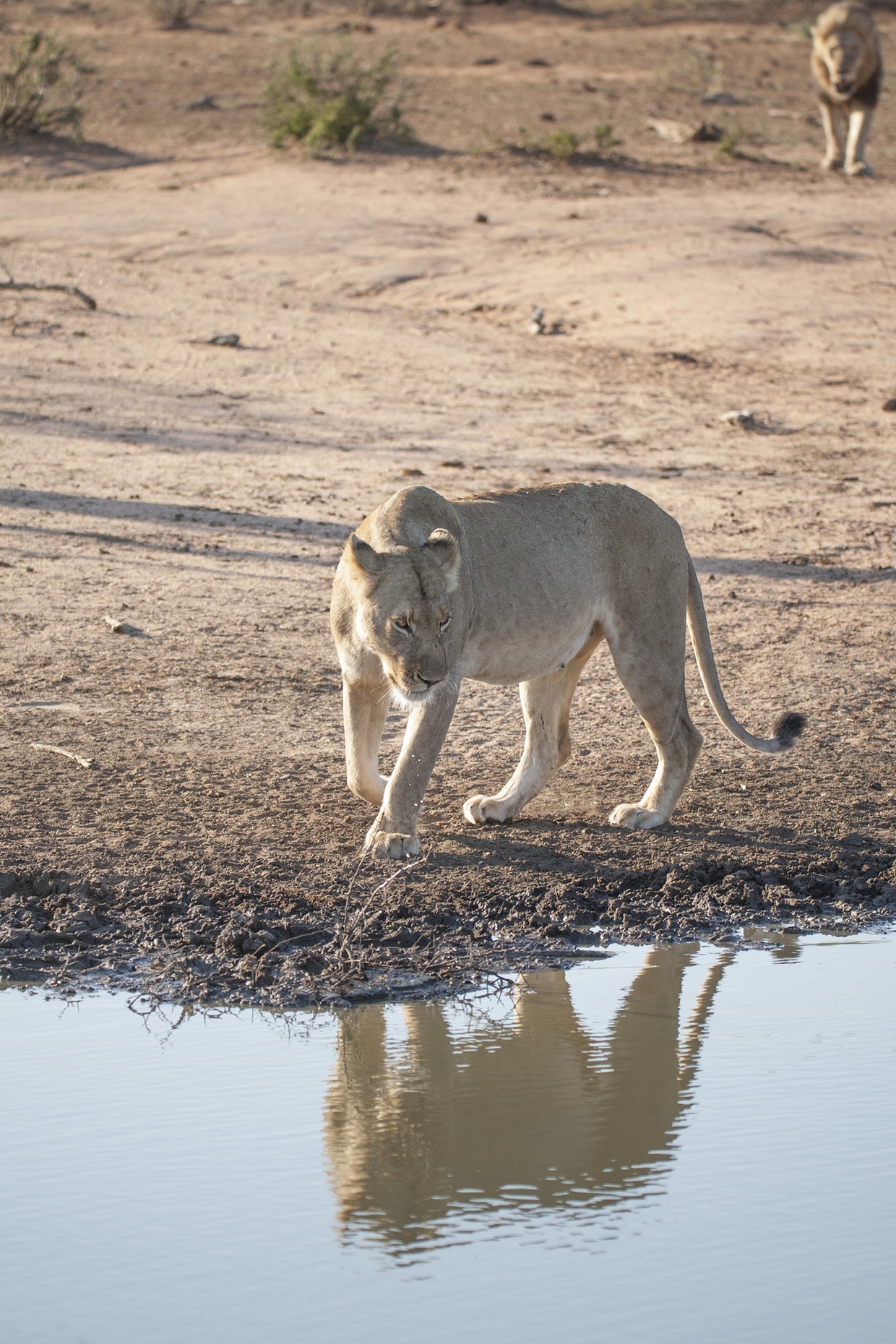 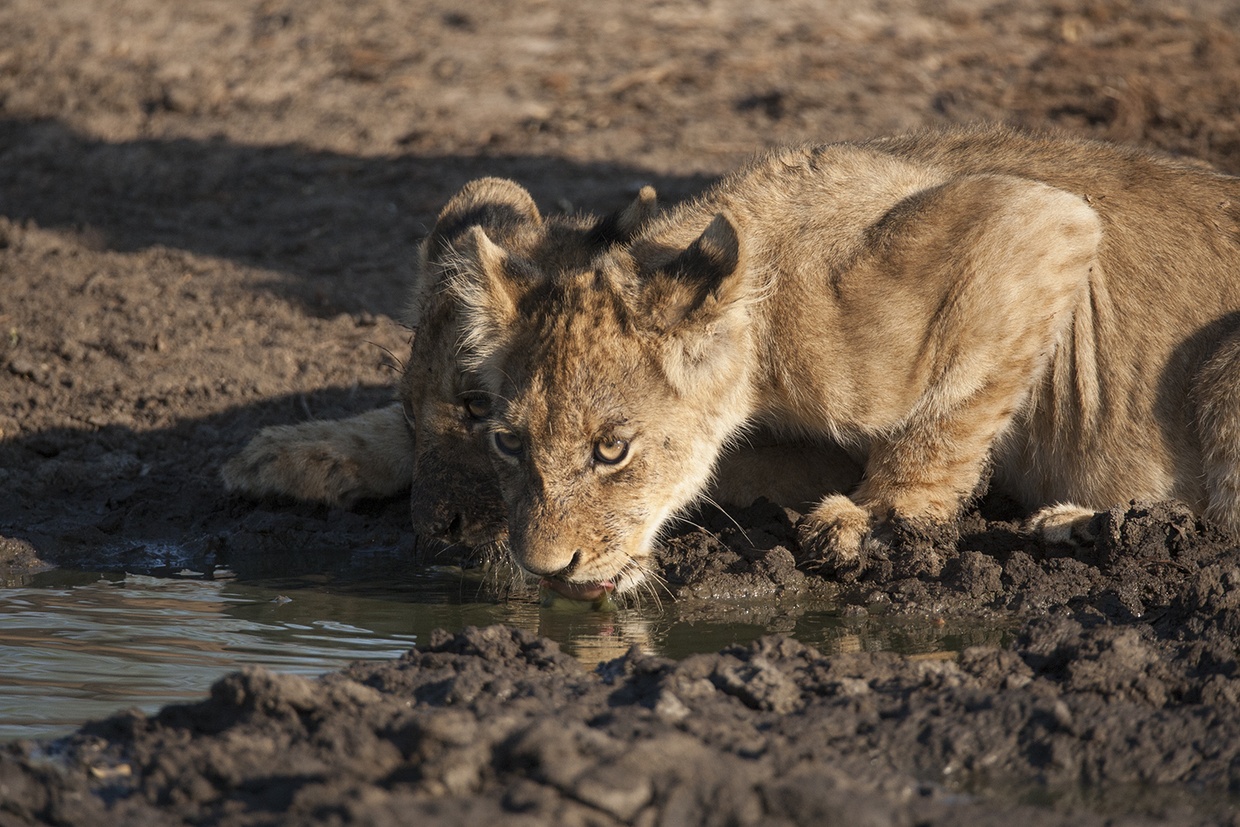 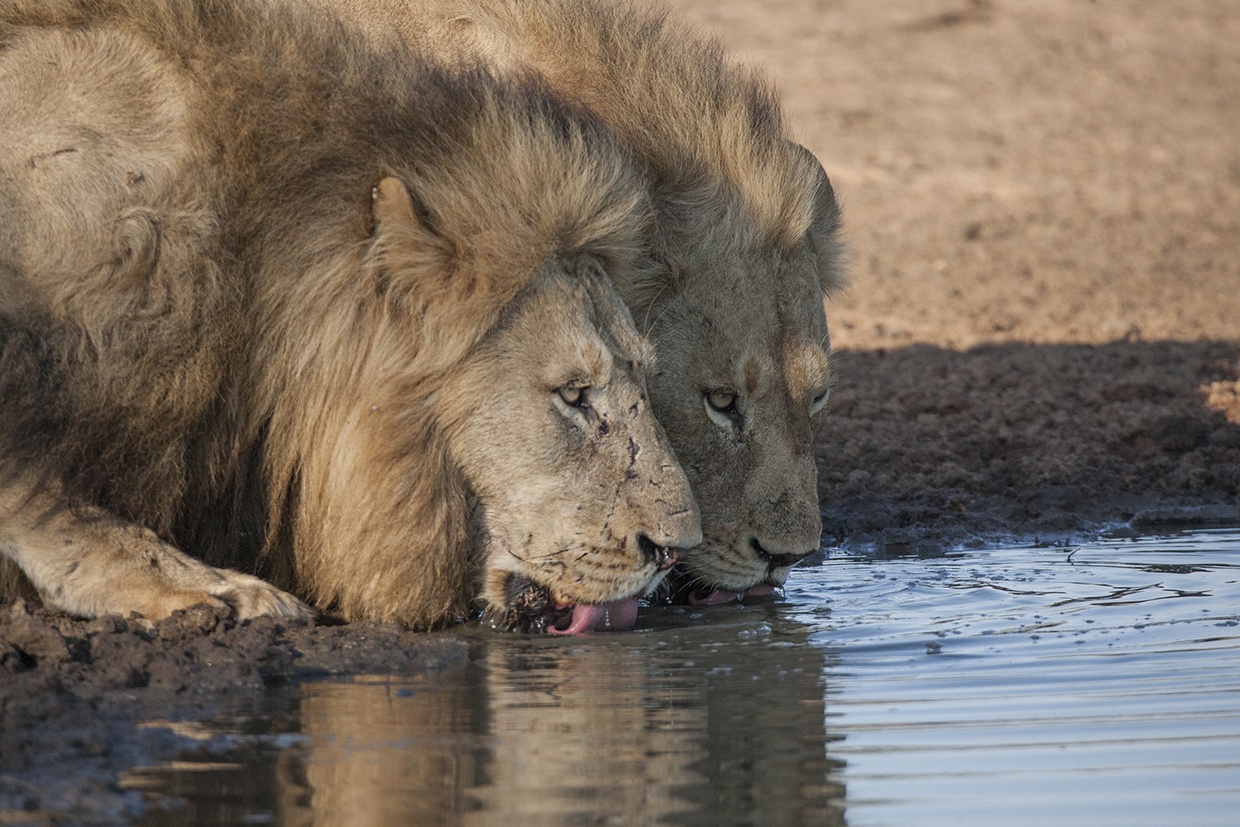 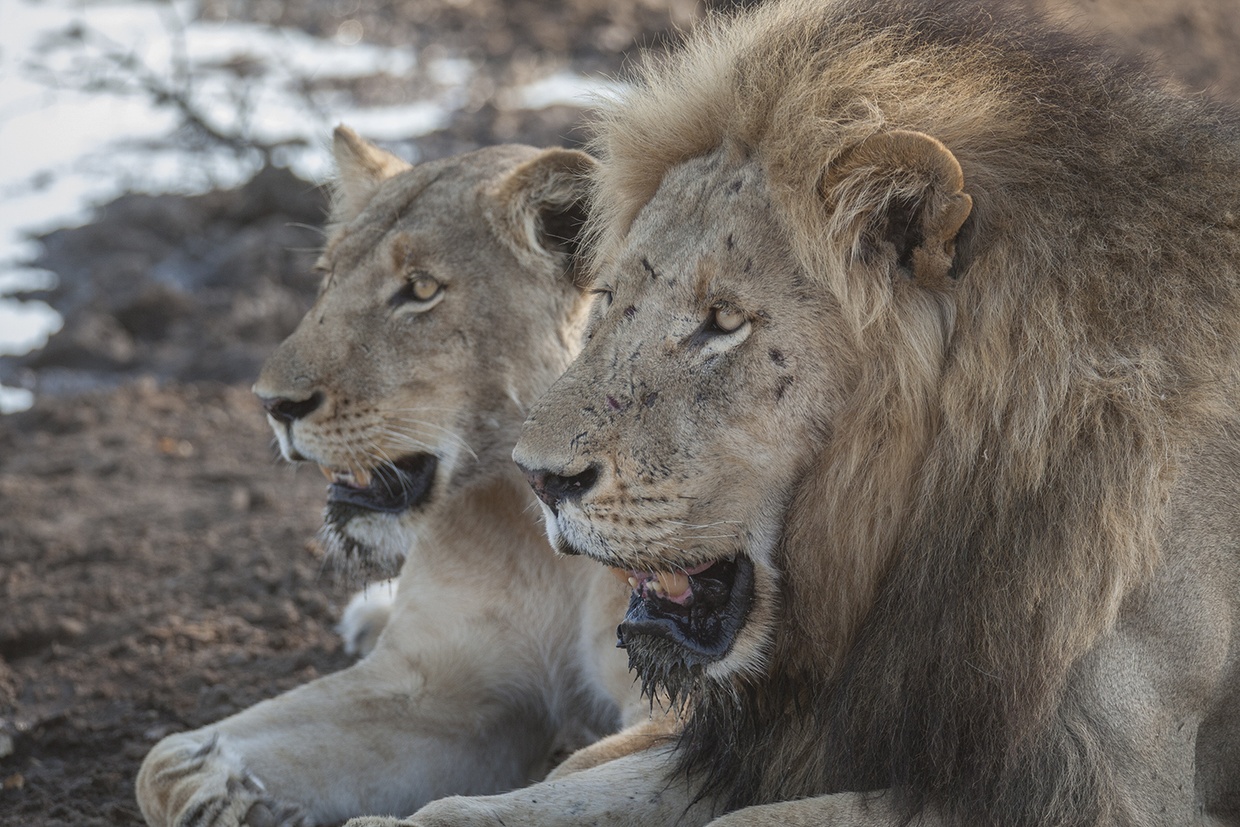 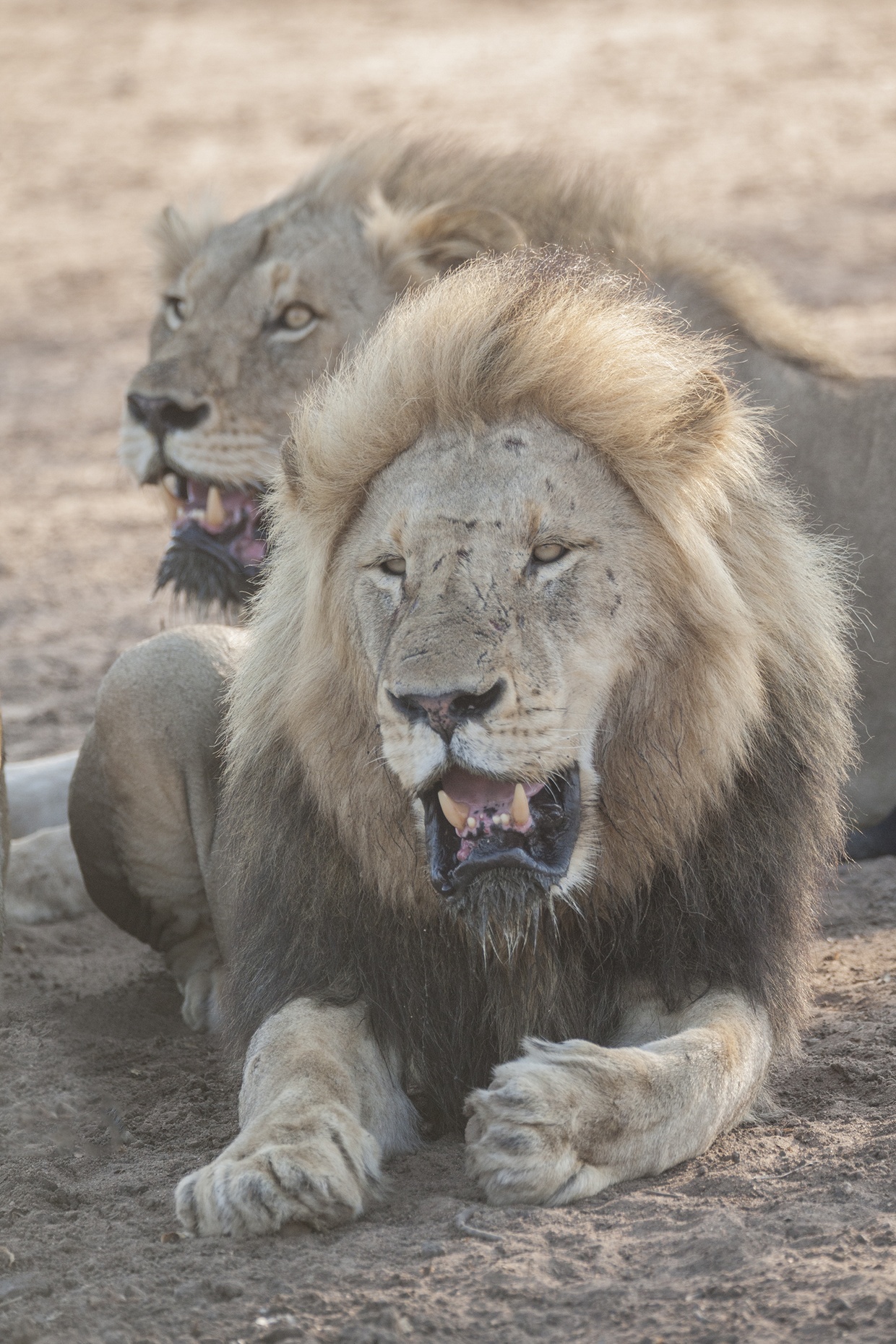 The other sighting that really stands out was last week when we heard the roars of the 2 Mbiri males very close to camp, we went out to see if we could find them, judging by the sound of the roars we suspected them to be at one of the waterholes roughly 2kms from camp. On arrival at the waterhole our prediction was 100% correct and the lions were drinking before setting off again on their territorial patrol. But something was wrong, the larger of the 2 Mbiri males was walking with a slight limp and his back and hind quarters were littered with fresh wounds, superficial ones but that wasn't the problem, as we positioned the vehicle to see the smaller male drinking we noticed the wounds he had sustained, far worse than his brother. The whole right side of his face was raw with clear puncture marks from what can only be another lion, his right eye swollen shut and clearly in pain every movement he made elicited a head shake. Now as harsh as this is and sounds, this comes with the territory of being dominant male lions, who these guys fought with is a mystery but the wounds they have and the fact that they are roaring and patrolling show of a victorious battle and another victory is that they successfully protected their females and cubs. It is reserve policy not to interfere with nature and this will be how the situation is treated, a few months ago the same male had another serious injury from a fight where it actually looked like he had lost his eye, however with in a a couple of weeks the wound had healed and he still had his eye so this just goes to show how tough these animals really are and that there is no need for human interference.

However despite the injuries, this sighting was incredible as we had both males lying close to the vehicle and roaring into the night, an experience that almost can't be put into words and can only be fully appreciated when you are there experiencing it, it is a sound that can be heard up to 8kms and we were listening to it a mere 1m from our vehicle, simply goosebumps stuff. 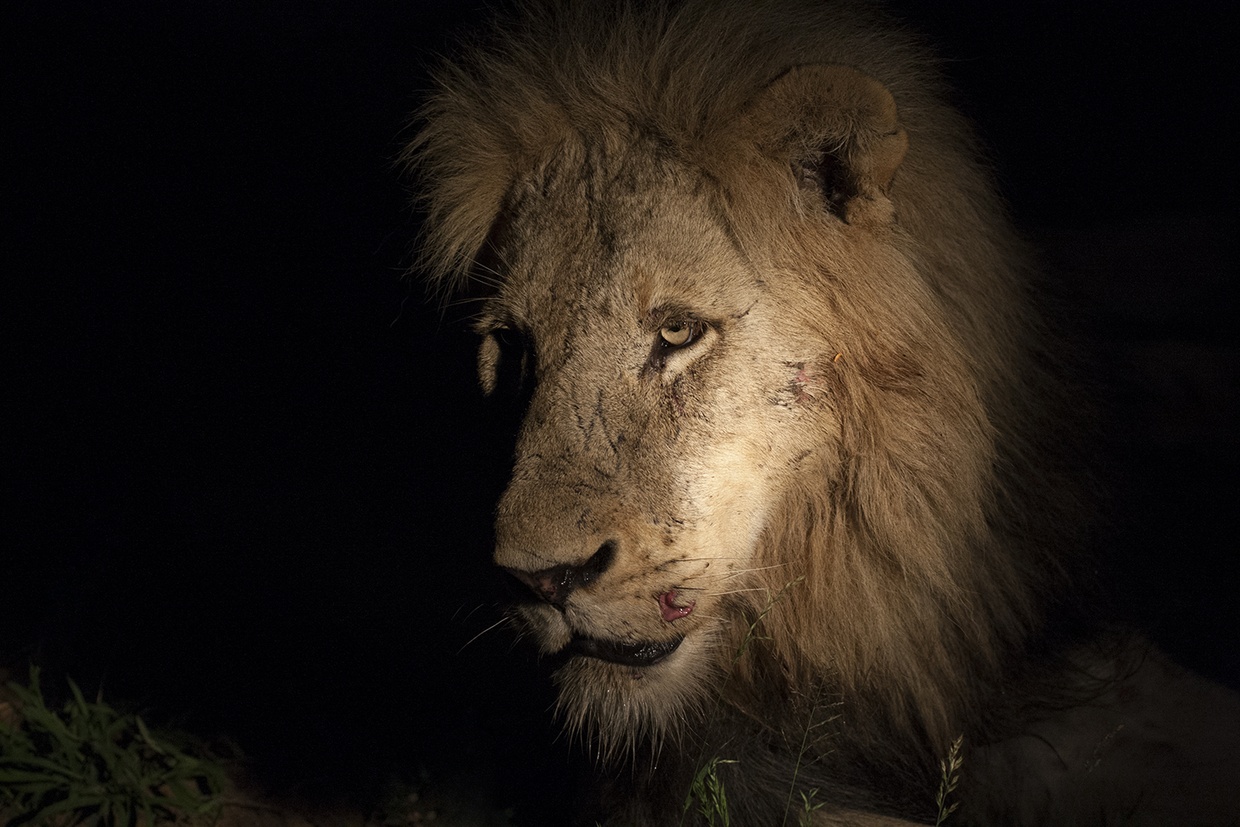 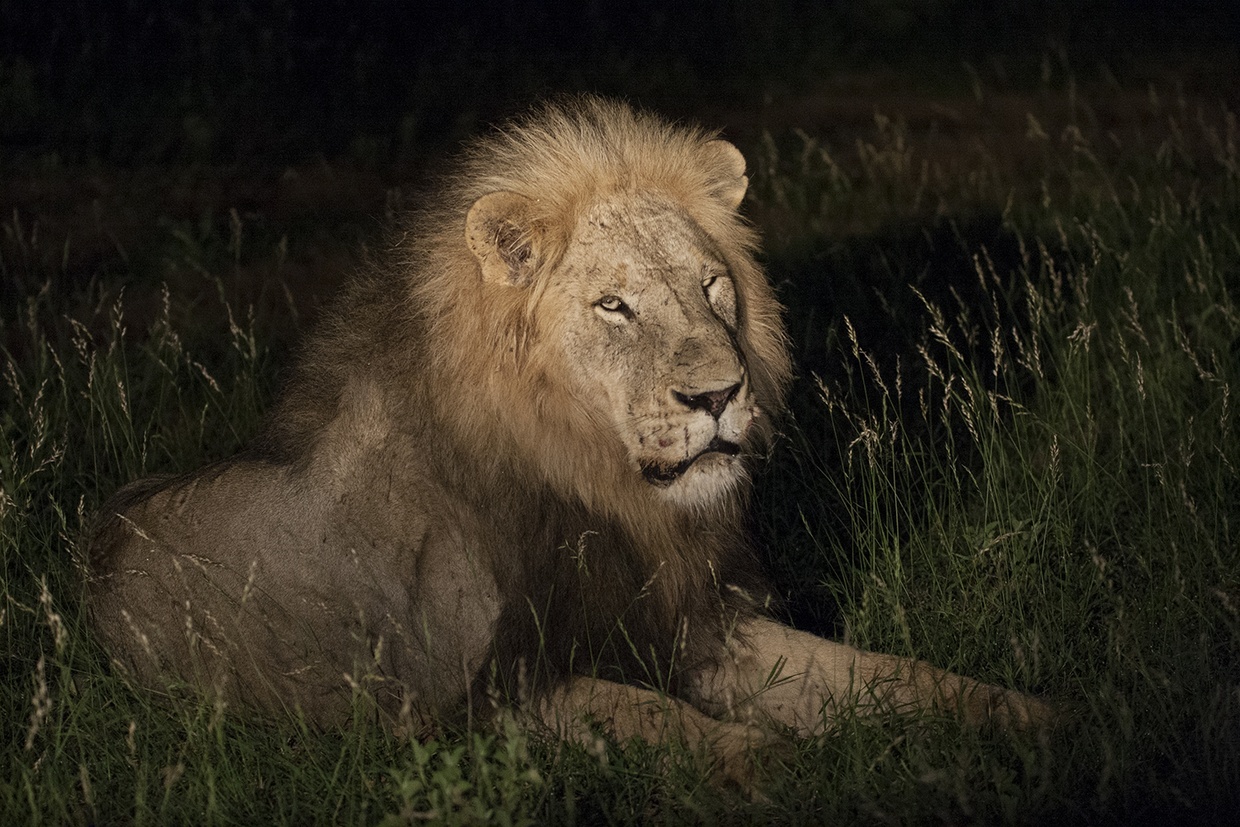 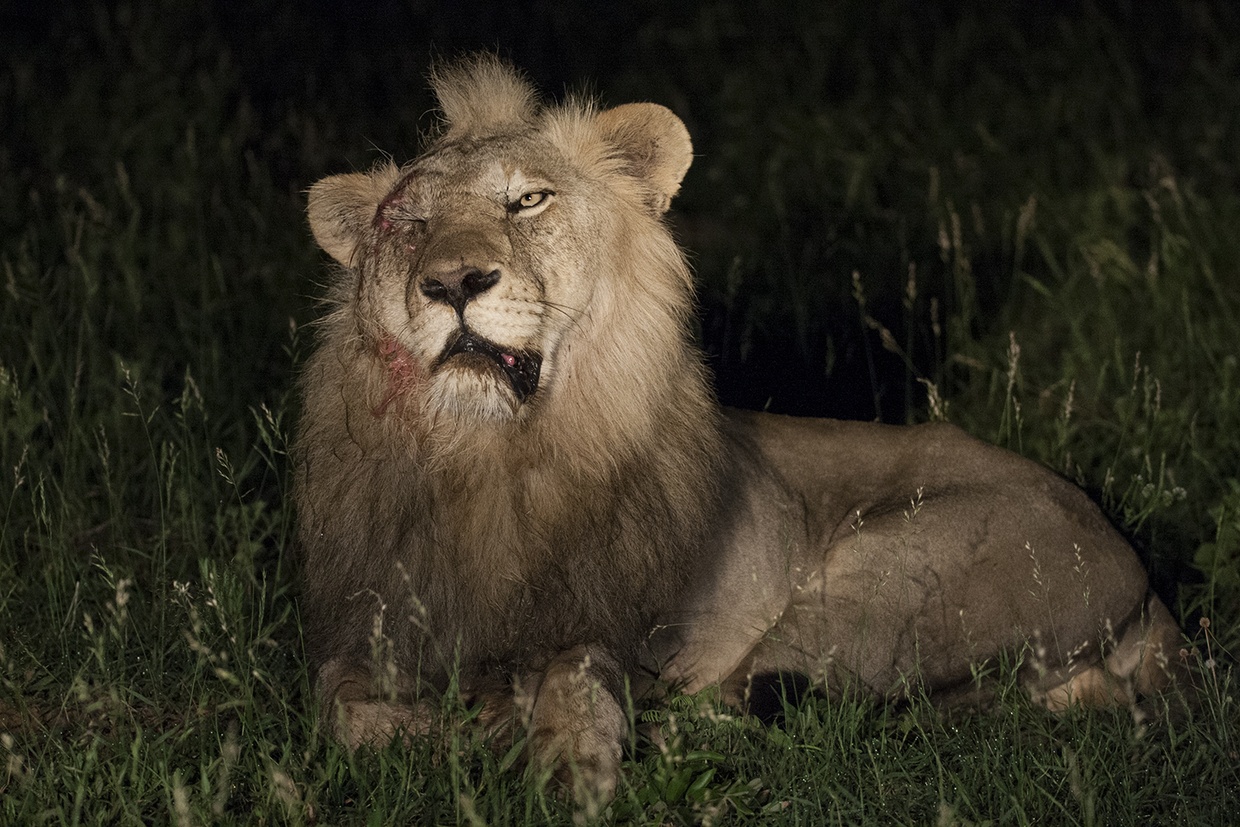 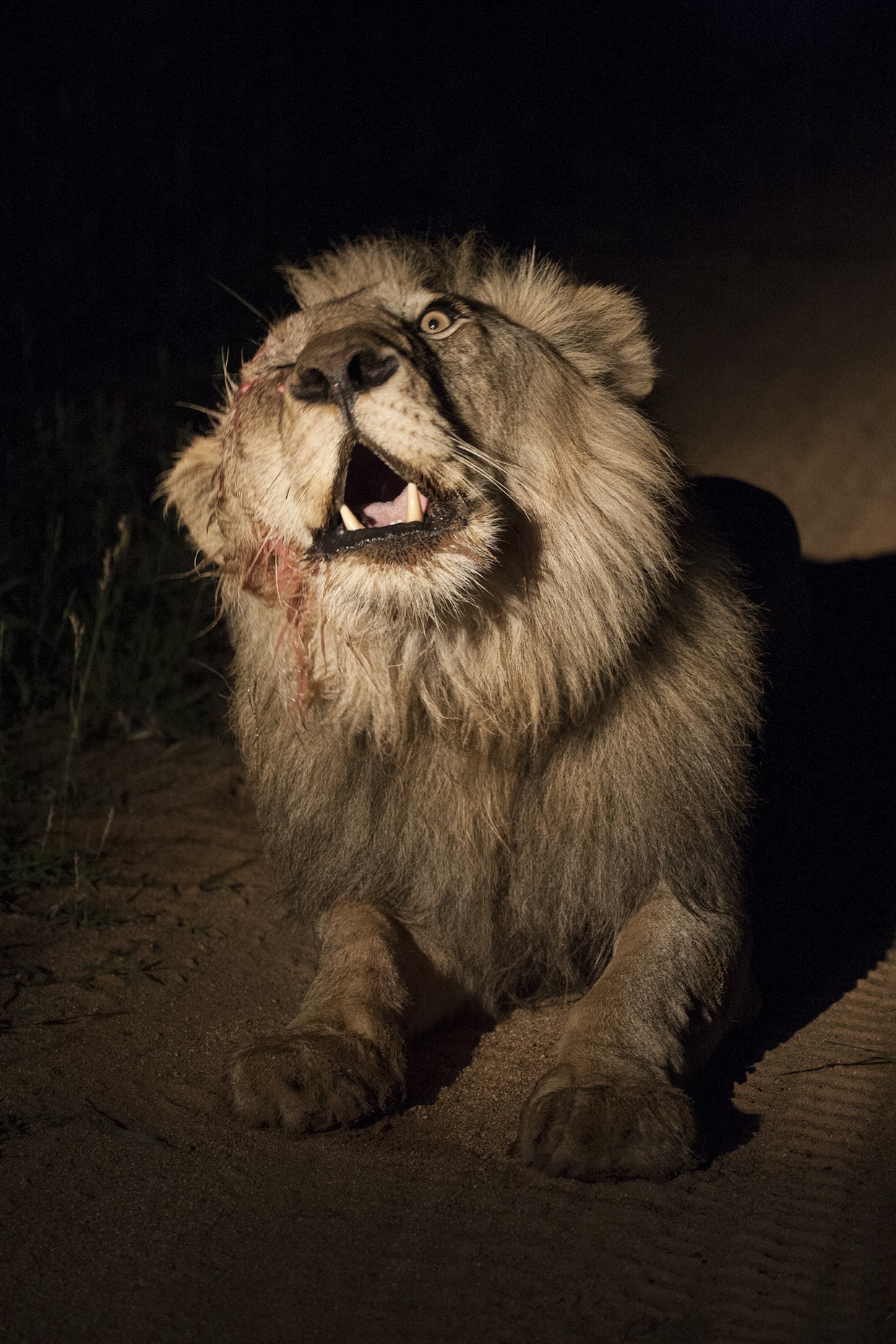