The Crocodile King of Marco’s Dam 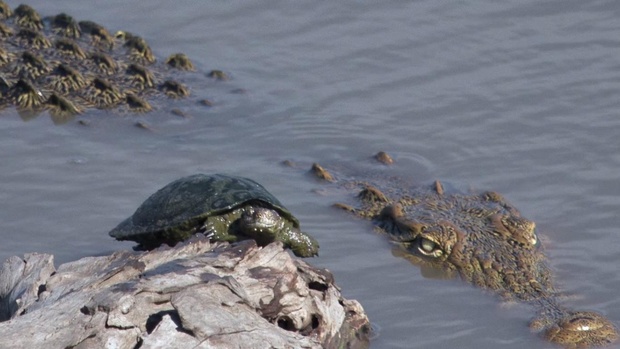 The crocodile is a fearsome, fascinating predator, and always an exciting sighting for Umlani guests in the Timbavati Game Reserve. Ian Ground captured a unique encounter between a crocodile and a terrapin at Marco's Dam.

All about a Crocodile

Ferocious teeth. An icy glare that speaks of murder. And an armoured bodysuit made of scales.

Nobody wants to mess with a crocodile.

The crocodile is an intriguing, calculating killer and always a thrilling sighting for Umlani guests in the Timbavati Game Reserve. They are brutal, skilled hunters and so stealthy. Even at their sometimes massive sizes, they can go along undetected just beneath the water’s surface. One of the scariest characteristics of crocodiles is this ability to surprise.

Such as in life, it’s always the quiet ones that are the most dangerous.

If it’s hungry, a croc will eat almost any unfortunate creature that comes across its path. They can hold their breath underwater, in wait, for up to 2 hours if they need to and have no mercy on their prey.

They are feared and respected by all in the animal kingdom.

The croc and the terrapin

Umlani’s recent guest, Ian Ground, had front row sets to a unique scene. He was looking out for wildlife at the hide which peers onto Marco’s dam- a favourite waterhole for all sorts of Timbavati animal locals. There he captured an encounter between a resident crocodile and a little terrapin.

The terrapin was sunbathing on a log, warming itself in the sun. The croc didn’t seem to like this kind of activity going on in his dam at all. In the video Ian captured, the croc is seen bullying the terrapin and eventually pushing him off his perch on the log. This act of dominance and power was the crocodile’s way of showing all creatures, great and small, that he is king of Marco’s Dam.

Here is Ian’s video of the encounter:

We can only image the sheer terror the little terrapin must have felt as he was sniffed, scowled at and pushed around by the mighty crocodile on a power trip.

He’ll be finding a new sunbathing spot next time, of that we’re certain. He knows who is boss of the waterhole.