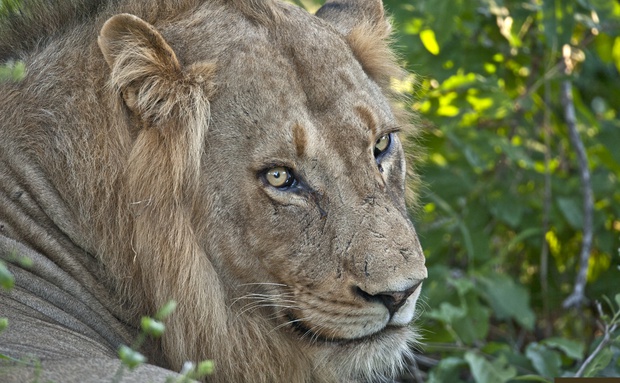 THE MONTH OF APRIL HAS BEEN ABSOLUTELY AMAZING TO SAY THE LEAST. WE'VE ENJOYED SOME OF THE BEST GAME VIEWING WE HAVE HAD IN A LONG TIME.

“…few can sojourn long within the unspoilt wilderness of a game sanctuary, surrounded on all sides by its confiding animals, without absorbing its atmosphere; the Spirit of the Wild is quick to assert supremacy, and no man of any sensibility can resist her.”

Although we didn't receive anymore rain this month, the seasons have definitely begun to change and the extreme heat of summer has been replaced by the more comfortable, moderate temperatures of autumn. As game drives set out in the mornings there is the slight chill in the air and the animals seem to be relishing the reprieve from the relentless heat we experienced over the past months. Big cat sightings have been the order of the month along with the return of the big herds of buffalo and elephants due to the abundance of water and new vegetation growth. Relish in the splendour of Aprils highlights in pictures.

A herd of buffalo at rest, predators have to break through the fortress of horns to get to the weaker and younger individuals.

Dagga boys spending the hot part of the day cooling off in one of the pools left in the river after the rains.

The piercing stare of one of the Ross males, they really seem to be stamping their authority on the area.

The scars on the faces of the Ross males are telling of the fact that they have already had run ins with other males in their quest to take over.

Sightings of chameleons will start to become less and less common as we move into the colder months, making this sighting extra special. It’s always amazing how our trackers are able to spot these little guys in the dark.

It’s always good to see new animals and this is the beauty of being an open system. This was the first time we have seen this female leopard and we look forward to many more sightings of her as she is extremely relaxed. We will have to find a name for her should she become a regular on our game drives.

With all the buffalo around at the moment so come a lot of flies, and this male lion was being pestered by them. It was quite comical to see him trying to catch them.

Every time we see these males they look more and more impressive. They have been hanging around and pushed Mabande right out of his former territory. I think we can expect to see more of the Ross males as they settle in their new found territory.

A young elephant calf, trying to suckle from its mom. Sightings of elephants have been at an all time high and its always interesting to watch them.

After the rains, the bush exploded and with all the fresh green shoots the zebras have moved in as its perfect environment for them to graze in. Zebras prefer the short new grass growth and they are taking full advantage of the abundance of food.

The tell-tale (pardon the pun) sign of a leopard resting up in a tree. Something that guides, trackers and guests alike as we look out for this sight in trees when out on drives.

Nyeleti has been seen a lot this month. She has been making her own kills but has also been in the company of her mom at kills provided by her too. She is looking more and more like Rockfig jr as she grows into a mature female.

Leopard tortoises have been out in abundance due to the water lying around as well as the fresh vegetation on which they feed. They get their name from the patterns on their shell that resembles the markings of a leopard.

This elephant calf knows he is an elephant but just not a big one yet. But that didn't stop him from trying to intimidate us.

Elephants are water dependant animals and an adult needs to drink about 130L of water a day. This means that we get fantastic viewing of them as they quench their daily thirst at one of our waterholes.

As seen in our latest Africa Geographic blog, Marula gave us a fantastic show a few weeks ago. She hasn't been seen that much this month and we suspect she must still be looking for a mate. We look forward to seeing if she was successful and if she’ll have cubs in the coming months.