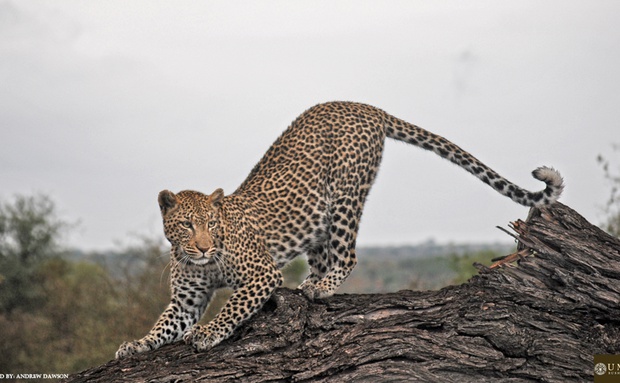 While there is still no sign of rain in the Timbavati, there have been plenty of animal sightings in the area as the predators take advantage of the thirsty prey.

As the year moves on at a rapid rate we still find ourselves firmly in the grasp of the drought. Water has become a precious commodity out here as only a small number of dams haven't dried up completely yet. It really is tough to see how the bush is thirsty and where should be long lush green grass is now baron soil. Thankfully the sightings this month haven’t disappointed, especially when it comes to the predators who are flourishing in these trying times. For them it is the time of plenty as hunting is made easy by weakened prey animals. The cycle of life is in full swing here at Umlani Bushcamp.

It’s been an interesting month. A lot of wild dog sightings, the return of Rockfig Jnr back down to the southern section of her territory, Mabande male lion and the Machaton pride had a run in with two unknown males, one of the white lions was mating with a Trilogy male and Marula female also made a welcome return from a long absence.

So sit back and enjoy our February highlights...in pictures.

The two older Machaton pride cubs honing their hunting skills on their mom. Play is an important part of a young lion’s life as it is these moments that teach them about bringing down prey when they are older.

Herds of buffalo have been ever present as they search for their daily water. The drought is especially hard on these bovines as they are bulk grazers and with the lack of grass at the moment they have started to browse on leaves in order to get their nutrients.

The Machaton pride recently welcomed 4 new cubs to the family. Hopefully these little ones can make it to adulthood as they are the future of the pride. It is great to see the Machaton pride growing again and we look forward to many more moments watching these cubs. There is a threat on the horizon though in the form of 2 unknown males in the area, who had an altercation with Mabande male recently. Hopefully they don’t return to finish what they started, we all are keeping our fingers crossed for these cubs, Mabande and the rest of the pride.

Rockfig Jnr has been spending a lot of time up in the northern sections of her territory of lat., We suspect she has either been mating or looking for a mate hence her absence from the south which was her usual haunt. This month saw her return and she did so with a bang, killing an impala and hoisting it up into a tree. Funnily enough she is still fetching her daughter Nyeleti and bringing her to kills. It seems a classic case of empty nest syndrome for Rockfig Jnr.

Another familiar face that we haven’t seen much of is that of Marula. However over the last week she is back to her usual ways of posing up in the branches of trees again. Here she is in one her favourite trees which is next to our lodge entrance road. She greeted all our new arrivals from this perch. How many guests can say a leopard was the first animal they’d seen on a visit- and they hadn't even been on a drive yet?

Staff at Umlani were taken by surprise one morning when a pack of wild dogs chased down and killed an impala in camp. The dogs ran right past one of our maintenance staff who was raking the paths, then passed reception down the stairs towards the swimming pool before catching the luckless impala in the river bed in front of camp. Sometimes it all seems to happen in and around camp!

We have been seeing a lot of elephants around lately especially around Umlani’s property as its one of the few properties that still has some water in its dams. Elephants are water dependant animals and need to drink daily, so this will insure that we have more fantastic sightings of these pachyderms.

Although most of our migratory birds have left due to the drought, the Woodlands kingfishers have stayed, the air is filled with their chirping call, and their vibrant colors light up the otherwise drab colors of the dry bush.

Guests at Umlani were not only lucky enough to see lions mating but they got to see the famous white lion mating. Although it was a really special sighting it comes with sadness as the fact that she is mating again means she has lost her cubs. This is not unusual for a first time mom so let’s hope she will be more successful with her next litter.

Marula’s young male cub has been out and about a lot this month. He is really exploring the area trying to find a place that he can settle in that is free of a big male. Time will tell if he manages to stay in our traversing area and we get to keep following this boy as he matures. It’s a difficult time for a young male as they have to avoid the big males who will either chase them off or kill them. So far he has managed to be elusive enough not to get noticed.

The harsh reality of the drought we are experiencing really hits home when you realise that there should be green grass instead of dry brown tufts and where there was once a dam there is only a small puddle. However for these Marabou storks it is a time of plenty as hundreds of catfish are trapped in the mud providing an easy meal for these scavengers.

As mentioned earlier, Mabande had a pretty seriously fight with two unknown males that came from the south, they chased him off and he was seen running east away from them, towards Kruger. However the next day he was back with the Machaton pride and there is no sign of the other males. Hopefully they don't return as 2 vs 1 are not good odds, g especially against males that seem to be very confident. Mabande has a tall order protecting his new cubs and the pride. However the fact that he is back is a good thing and maybe the altercation wasn't as serious as we imagine. But time will tell whether or not these newcomers make another attempt at over throwing Mabande.

That's all for this month, we hope you enjoyed our highlights package. We all hope that next month we will be able to report that we have at least had some rain and reprieve from the drought.