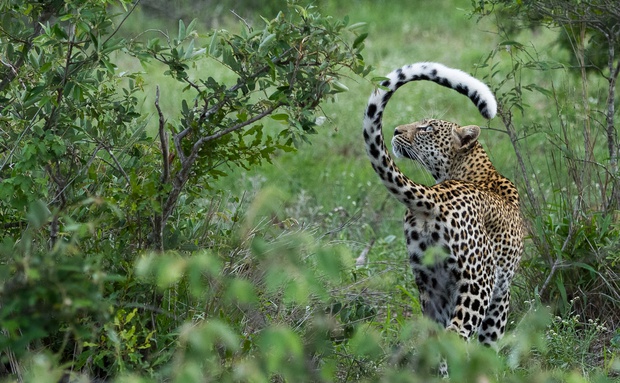 The month of January has produced, yet again, an incredible amount of wildlife sightings. From dusk till dawn, day after day, the animals have flourished and are relishing the newly transformed landscapes that the rains have brought. It has been a joy to observe the constant fluctuations of game passing through the various sections of the Timbavati from East to West and North to South. Although the bush is now lush and thick it is hasn’t hindered the potential to experience incredible wildlife sightings, if anything we are experience a mini boom. We have been graced by the colorful presence of Carmine Bee-eaters all the way through to the magnificent Wild dogs.

“Africa – You can see a sunset and believe you have witnessed the Hand of God. You watch the slope lope of a lioness and forget to breathe. You marvel at the tripod of a giraffe bent to water. In Africa, there are iridescent blues on the wings of birds that you do not see anywhere else in nature. In Africa, in the midday heat, you can see blisters in the atmosphere. When you are in Africa, you feel primordial, rocked in the cradle of the world.” - Jodi Picoult.

Its difficult to put a finger on which sightings have been the best over the past month as each experience is unique in its own special way. One thing we can say for sure is that being out in the bush on a day to day basis is a rewarding luxury not to be taken for granted. The summer is in full swing rendering all its glory upon us and nature certainly has delivered. Here is is a few updates on whats been happening in and around Umlani Bushcamp over January.

As the rains continue to nourish the soils of the Timbavati, imprints from the wonderful Leopard tortoise have been dotted all over the place. We have been consistently finding these ancient looking creatures as they tend to come out of hiding and move up slope just before the rains. Probably one of the best natural indicators that rain is sure to be on its way and they do this in order to prevent being washed away into rivers where they may possibly drown due the sheer force that the torrential rains bring with them.

Nyeleti one of the territorial female Leopards has been seen on numerous occasions around our traverse allowing us to really get to know her personality. We have watched her hunt, we have even seen her in altercations with hyena’s on two occasions.

She also loves spending ample time in trees to escape the relentless heat of the African sun as well as to scan the horizon for any potential prey items.

Elephants have been spotted frequently as they move from one rich food source to the next. Often you’ll find the Elephants kicking up sand in the dry Zebenine, Nhlaralumi, and Machaton Rivers to get cold, fresh water stored below the Earth’s surface. Such is the wisdom of these gentle giants. The dam’s dotted along the Timbavati are often one of the best places to go look for the elephants.

We have also been seeing a lot of Buffalo of late wallowing in the mud and grazing the new grass that had been missing for so long. This, in turn, has brought about a heavy presence of Lions to the area who are lured in by the irresistible stench of these breeding herds and bachelor groups of “Dagga” boys. Often at night we have herd the bellows of Buffalo in the distance knowing full well that the Lions have locked on.

Another memorable moment was getting to spend time with Marula another female leopard graced with the best genes nature has to offer. Exciting times lie ahead as an incredibly beautiful male was spotted near Impala dam. Upon further investigation it is now known that this was the male found mating with Marula not so long ago. Fingers crossed that we will have some cubs on the way.

One other thing that has stood out this past month is the frequency of Wild dog sightings. Literally just about every other day they have been seen. There are currently two packs on the loose one consisting of eight and the other of eleven. They are taking full advantage of the end of the lambing season for the Impala. Often they’ll be hunting and instead of taking down just one Impala they take down a second just to make sure they are well fed. As we all know Wild dogs are able to consume an entire prey item within minutes the reason being that this allows them to avoid any confrontations with other apex predators and allows the species to flourish out of harms way. Wild dogs are also extremely gregarious animals and provide many special moments to admire while out in the bush. Things constantly change out here with animals fluctuating from one place to the next but we sincerely hope that these two packs will stick around for a long time to come.

View a short clip of the interaction between the wild dog pack.

Last but not least are the Lions. Although it is mostly known that Lions are strictly territorial and prefer to keep within their established boundaries within their home ranges it seems the Lions of the Timbavati and neighbouring reserves have other ideas. We have been seeing Lions of various prides moving far beyond the boundaries of their so called territories. The massive Giraffe pride has split into subgroups and have been seen moving further and further east after which they’ll return west and then come back east. Perhaps it is just a matter of expanding because the pride is growing bigger in size with the addition of new cubs. The various subgroups of the Ross pride are also scattered all around the place and none really seem to be tied down to a specific area. Unknown, presumably nomadic, males are coming and going. There is lots of food for thought when it comes to the topic of the Lions of the Timbavati but so far their somewhat “unusual” behaviour provides the basis for interesting times ahead.

That's all for now folks. We hope you have enjoyed our highlights for the month of January it has been a special month. What the future has in store for us we have no idea but we will be waiting full of excitement to see nature unfold yet again.

Written by & photographed by: Sean Cawood