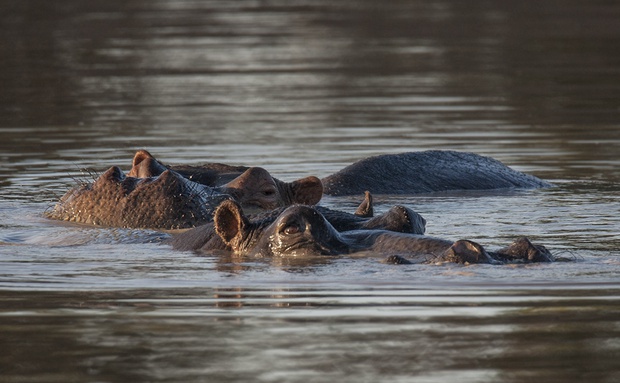 The month of June has been absolutely outstanding as we once again find ourselves firmly in the grasp of the dry season.

"There is a real art to tracking; it goes beyond physically looking down on the ground and looking at tracks. When you’re on the ground, you’re in their space, and you sort of get in their head as well. You become a lion. You become a leopard. And you become very, very close to them spiritually and otherwise by knowing the way they walk."

Due to the late rains we received it feels like we missed the wet season completely. Temperatures have dropped considerably which at least gives us a reprieve from the hot summer days. Game viewing has been at an all-time high with lots of action. The return of the big buffalo herds has brought with them their old nemesis the lions. Guests have been lucky to see a lot of interaction between these two big game species which is always an adrenaline filled experience.

Our leopards have also been out in force as well with all our familiar favourites being seen as well as the return of Ntsogwaan male from the south after months of him being absent from our traversing area. Please grab a cup of coffee or a glass of wine, sit back and enjoy all our highlights for the month all crammed into this installment of Umlani's photo highlights.

The Machaton lioness has been seen a lot this last month as she has been spending a lot of her time around Umlani. The sad news is that it seems she has lost her sub-adult male cub. He hasn't been seen since last month and was too young to be able to fend for himself. We have had a coalition of males move in from the north and we suspect they are responsible for the loss of the cub. The lioness however seems to be holding up and on one particular occasion we saw her bring down this young buffalo on her own. The hunt was incredible to see as the odds of a lone lioness pulling off a hunt against a herd of buffalo didn't favor her. Yet she surprised us and was successful. However the success was short lived when a clan of hyenas arrived on the scene and stole the kill from her.

It seems with every monthly highlights blog I write there are more baby hyenas to talk about. The den is still very active with a whole host of youngsters of various ages being seen daily. The amazing thing is how relaxed the cubs are at such a young age, often walking right up to the vehicle and sniffing around curiously. Sometimes they are even too relaxed and start to chew on the tyres, hopefully a habit they lose soon as hyenas have the most powerful bite and we may just end up with a lot more flat wheels.

Elephant sightings have been incredible as always. Large herds are a constant as they move through our traversing area in search of water. We even have them digging for water in front of our bar deck on most days, allowing our guests a more up close and personal experience with these gentle giants.

A new face for us, this male leopard has been seen a few times of late. Perhaps he is trying to establish himself in the area. He isn't the most relaxed individual although you wouldn't say so from this photo. I am sure that with time he will settle down and allow us to view him at close range. It is always a good sign to see new leopards in the area as it brings in fresh genes and keeps things interesting for those of us who follow these beautiful big cats.

Mabande male made a brief appearance this month after being chased out of his former territory by two younger male lions. He has been spending most of his time in the next door reserve; however pressure from the Trilogy males pushed him back towards us. He was found in the company of the lone Machaton lioness, however the next day he had moved off again and left the lioness alone. It can't be easy for a male lion on the run in search of any open space for him to settle and see out his remaining years.

The Ross pride also hasn't had it easy, losing the lead lioness to the two new males as well as the young male lion from the pride sustaining a severe injury to his hind leg from the same males. The pride has been left to wander around aimlessly leading a more nomadic existence. They were however successful in bringing down a large buffalo bull a few days ago and hopefully once things calm down regarding the new males, the pride can grow yet again and become more established.

The new boys on the block. These are the two males that have been causing so much havoc of late. Known as the Timbavati males they have moved in from the northern sections of the reserve after being kicked out of their natal pride, the Timbavati pride. Their arrival was one of epic proportions where we could hear their roars coming closer and closer. They would cover huge distances in a single night leaving their prints all over as they sought out the various lions in the area. A few days ago they caught up with the lone Machaton lioness who was calling out to any lion that would hear her; however the meeting wasn't one of support. She received a beating before the males once again left her and headed off at a run to the south. Let’s hope that they settle down after asserting their dominance and bring some stability to the lions in the area. Interesting times lie ahead, that's for sure.

Marula female has been seen a few times recently, and although there were reports of her having cubs it seems we are still waiting to see them. She doesn't show any signs of suckling cubs or that she is pregnant. So fingers are still crossed that in the coming months she will produce a litter. She spent a lot of time in the Klaserie reserve potentially seeking out or mating with a male.

As mentioned, Ntsogwaan male made a very welcome return. It’s always impressive to see a big male leopard as they are twice the size of the females. This sighting was not only special because we got to see him again but he had also killed a huge male waterbuck, a very impressive feat for any leopard. It seems that Ntsogwaan had been in a fight as he has a few fresh wounds on his body and chest but hopefully his returned presence means he came out on top and we see more of him in the future.

Although winter isn't the best time for bird watching, we still have plenty of birds around to be seen. We have been very fortunate and seen the endangered Ground hornbills a few times and often wake up in the mornings to their booming calls echoing across the bush.

The buffalo herds have been under a lot of stress from lions lately, almost every herd has lions trailing them. We watched two lionesses make many attempts on a single herd one evening however it was to no avail and the large bovids all lived to see another day. Winter is a fantastic time to experience the herds of buffalo as smaller herds join up to form massive herds of up to 1000 individuals. You can imagine the sight and sound as they kick up dust, surrounding the vehicles. It truly is an awesome experience.

Winter is the time of plenty for the predators and the month of June was dominated by the big cats. It’s still early in the season and as resources start to dwindle, tough times lie ahead but we will be here to see what the next month brings.