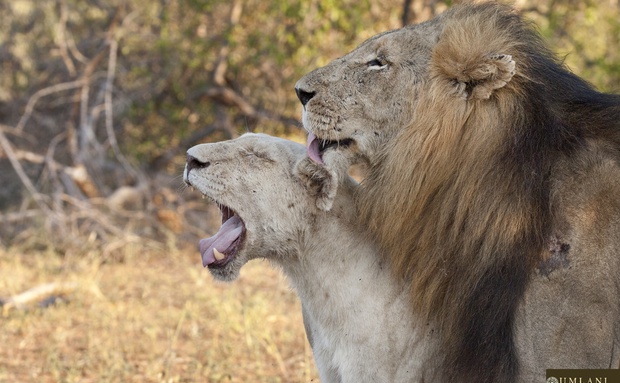 As the seasons change yet again, the excellent game viewing has remained a constant here at Umlani.

May signalled the return of the lions. We got to see pretty much all of our lions and had some fantastic sightings to go with that. The presence of the buffalo herds means that lions have a constant source of food and, on numerous occasions, we found our lions dining on an unfortunate buffalo.

Leopards have also been ever present, including some of our less seen individuals like Thumbela female who introduced us to her latest cub. Rockfig jr has still been providing kills for Nyeleti who by now is independent but they are regularly seen in each other’s presence.

Elephants have been around in numbers obviously enjoying the amount of water around after the rains we received. They are not the only ones enjoying it. Crocodiles and hippos have moved into a lot of the dams and are always nice to see out on a drive.

From the big to the small one thing is for sure this month has been a month packed with amazing sights from the bush, so enjoy our photo highlights for this action packed month.

The toothy grin of a Nile crocodile! With all our dams filled its amazing to see that almost each one has its own resident croc. The fact that they cover great distances when finding water after a drought is incredible.

Hyenas are a constant presence at the moment. The clan is constantly growing in numbers and have confined their dens to Umlani's property. This is good for us but all the other predators are having a tough time keeping their kills with these powerful scavengers around in such great numbers.

We’re seeing plenty of giraffe around due to the abundance of green trees thanks to the localised rain that we have received. Giraffe are usually solitary animals but can be found in large groups, called journeys, in areas where there is good feeding.

The Giraffe pride pulled down a big bulffalo a few weeks ago. This sighting was special for so many reasons, not only were the two Trilogy males present but also the two white lions of the Timbavati, plus the pride’s latest additions: three young cubs. The Giraffe pride is the largest pride we see in our traversing area and the white lions are always an incredible sight to see.

Marula female made a kill not too far from the camp. She was on the kill for 4 days giving us some amazing leopard viewing. She alternated between resting in the root system of a Weeping boer-bean tree, feeding and lying out in the open on the sand of a drainage line. She really is a superstar of Umlani's game drives.

Two Crested spurfowl battle it out over rights to mate with a female. The aggression shown by these little birds is absolutely mind-blowing. They get the name spur-fowl from the spurs found on their legs which the males use when fighting to inflict injury to their opponents.

The Ross males have been out in force this month, asserting themselves in the territory that once was the great Mabande male’s. They seem to have successfully pushed him out of the area, and it is only a matter of time before they start mating with the lionesses in the area.

Rockfig jr has been a little scarce, but when she has shown herself it’s usually with a kill. She was nursing a bit of an injury that she might have received from a fight or a hunt. She is all healed up now and looking as good as ever though.

One of the white lions stares at one of the lionesses from her pride as she approaches. This lion in particular has the most captivating eyes I have ever seen on a lion and this adds to the mystical feel one gets when viewing these special lions.

A Trilogy male and one of the older cubs from the Giraffe pride feeding on the buffalo kill. The sheer size of the male can clearly bee seen when he is compared to the young cub. One of the most interesting things to see at a kill like this is that the males tolerate their cubs feeding but should one of the lionesses approach, the aggression starts and he does not allow them anywhere near the kill.

Marula female, stalking impala. The dappled light coupled with her amazing camouflage allows her to almost disappear. To watch a leopard stalk is absolute poetry in motion. Every move is thought out in order to stay concealed from their quarry.

One of the young hyena cubs at the den. The interaction between the clan around the den is a fascinating thing to see. When it comes to hyenas, dominance develops from a young age and even some of the adults are submissive to the more dominant cubs.

Thumbela's latest cub has been seen a few times. It looks like the cub is around 4 months old. Due to Thumbela's territory being more to the east of our traversing we don't get to see too much of her but lets hope she spends a bit more time on this side and we get to see this little one growing up.

Nyeleti has been very active of late. She seems to be setting up a territory in our central region, we have seen her scent marking which not only advertises her presence to other female leopards that potentially want to lay claim to the area but will also let any males know she is independent and may be readying herself to mate in the coming months.

The clan of hyenas managed to steal a buffalo calf kill from the Machaton lioness and her youngster one night. The sheer numbers of hyenas was just too much for the lone lioness and despite her fiercely trying to defend the kill they proved too much for her and she reluctantly headed into the night, leaving the hyenas with her hard earned and much needed kill.

A buffalo cow and her youngster move in to take their turn drinking at a small waterhole after the rest of the herd. The light in the late afternoon magically emphasised the awesome sighting of a large buffalo herd.

Red-billed oxpeckers hitching a ride on the back of a buffalo. These birds are often regarding as little helpers to the animals who play host to them as they remove ticks and other parasites. Oxpeckers are also responsible for keeping wounds open in their search for blood. They also add a lot of colour to photographic opportunities.

A few days ago we had the Machaton lioness and the sub adult male cub drink right in front of camp at a pool in the river bed. To have lions this close to camp really makes you realise you are in the wild. Not everyone can say they have this sort of neighbour.

This elephant bull was standing next to the road, feeding, when he turned towards us, allowing for this powerful image. You have to love the textures that elephant skin brings.

This unfortunate looking fellow, the Marabou stork, has been hanging around camp the last few weeks; he is regularly seen at the waterhole in front of camp where he feeds on frogs while our guests are dining on their lunch. Although he can only be likened to a grumpy old man his colouration and sheer size does make him an impressive sight to see.

That’s all for this month. As winter approaches, we look forward to the mad sightings that come along with it. Until then be sure to go to our Facebook page for daily updates on the goings on here at Umlani Bushcamp.