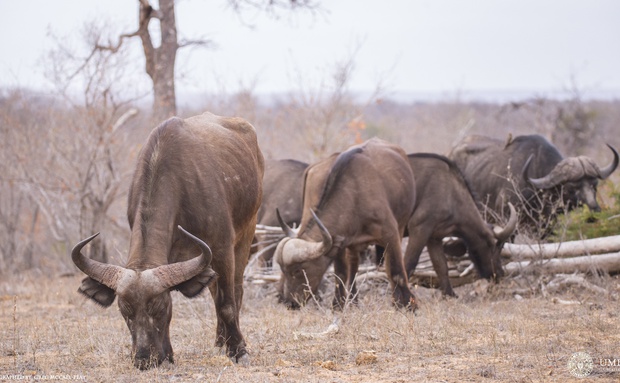 Spring has finally arrived in the Timbavati bush but the drought is far from over.

"I believe there is no sickness of the heart too great too great it cannot be cured by a dose of Africa. Families must go there to learn why they belong together on this earth, adolescents to discover humility, lovers to plumb old but untried wells of passion, honeymooners to seal marriages with a shared sense of bafflement, those shop-worn with life to find a tonic for futility, the aged to recognize a symmetry to twilight. I know this all sounds a bit much, but if I have ever seen magic, it has been in Africa."

We have had the odd bit of rain every now and then, but apart from a few flowering Acacia and Cassia trees, it still looks like we're in the middle of winter. Despite this, sightings have been amazing with us seeing everything from wild dogs to mating leopards.Take a look at our September highlights to see exactly what we got up to...

The Sumatra male lions have been in and out of our traversing area this month. On one occasion we saw this male full bellied and away from his brother. The lions have been hammering buffalo lately so can only image he had been sitting on a buffalo kill, keeping it to all to himself.

The beautiful, yet elusive, Thumbela female was seen a number of times. It seems like she has lost the cub she had and was seen mating. It’s unlikely she’ll pregnant, however, as the male was her previous youngster and seemed hesitant to mate with her. With any luck, she will be able to find another, more willing mate soon. Hopefully we will continue to see more of Thumbela as she really is a pretty leopardess with an amazing disposition.

Elephant herds have started to join up, creating large groups of over 50 elephants. This makes for some fantastic viewing opportunities of the largest land mammal. At times we have found ourselves totally immersed within the herd with elephants in every direction one looks.

The hyena den is still a major attraction in the area, although its moved from one den to another. There is currently one tiny youngster who seems to always be up to something. On one particular morning, its mother had had enough and physically went to fetch it after it was tormenting another clan member. One can not get enough of hyenas at the den and the amazing interaction that can be witnessed.

This big tusker has been seen a lot lately. His gentle demeanor and relaxed attitude often leads to awesome close up sightings of him. Big bulls like this are not common anymore and the fact that he hangs around in the Timbavati means his genes are being spread and that his legacy will live on for future generations.

A lonely cattle egret perches on the debris of a fallen Red billed buffalo weaver nest in one of our waterholes. Birding isn't the greatest at the moment but as summer approaches, we will soon be seeing the first of the migrant species arriving.

Marula female has been mating with an unknown male over the last few weeks. It seems she is making sure she falls pregnant. Leopard gestation periods are usually around 3 months so hopefully we will have a couple of fluffy bundles of joy running around soon. The male leopard isn't very relaxed but will hopefully settle and allow us to see more of him. He is young, but big and it’s always impressive to see these muscular cats strut their stuff.

The wild dogs that were denning to the north have been moving through our traversing area quite a lot over the last few weeks. The pups are now big enough to move around with the pack as they hunt.

Nthombi female has been seen on a number of occasions quite far south of her territory. This could possibly be to give her current cub enough space to explore, while also allowing herself space to hunt freely without having to provide for her cub who is now bigger than her. It’s a stressful time for a female as more often then not, these young males take over kills and the mothers don't get to eat. None the less, it is always amazing to see her. She is one of the most relaxed leopards and is never hesitates to show off.

Nthombi’s current young male, Mondsweni, is an absolute beauty. He is still very young and figuring out his place, so isn't the most relaxed male but no doubt, with a bit of time, he will be posing for our guests like his mother. We hop he manages to stick around the area, even if it’s just for a couple more years.

The buffalo have been mercilessly hunted by the lions recently due to their weakened condition from the drought. Some bulls have decided that it is safer to live in our camp and now spend their days at our waterhole and their nights resting amongst the guest rooms.

A bit of sad news is that we have lost one of the white lions. The blue eyed female was unfortunately gored by a buffalo and died from her wounds. A vet was called in but she was too far gone to be saved. It is an incredible loss and very sad but it is nature and that’s the way of the bush. This female did have cubs and fortunately the cubs were seen with the other lionesses from the giraffe pride who may adopt the youngsters and give them a chance at survival.

That is all for this month. It was full of amazing sightings with many ups, and a couple of downs, but it’s always interesting times and never a dull moment at Umlani Bushcamp. Until next month…