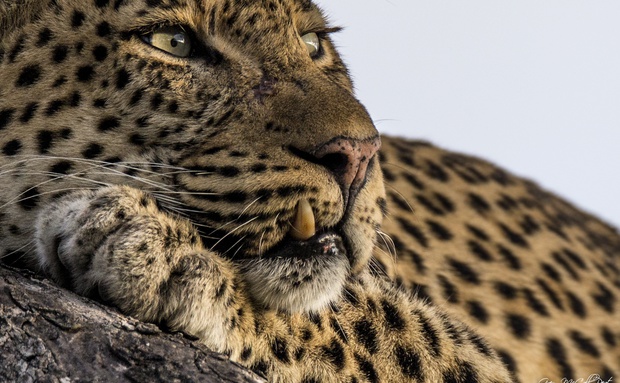 Being part of an open system reserve, we are fortunate to have a lot of animal movement into the reserve, be it from the Kruger National Park or our neighboring private reserves. Often we get huge herds of elephants and buffalo that one can only experience in these vast wilderness areas.
But more noticeably we will get the arrival of new individual big cats, especially leopards. Now every leopard has its own individual spot pattern, and after getting to know the leopards that have spent years in our traversing area it is very easy to see who the new comers are, some...like in this case are more easily recognizable than others. In this blog post we will be introducing you to one of these new leopards and hopefully one that will provide us with many hours of viewing in the years to come.

Over the past 8 months, there has been stories from the game drives about a male leopard that has started to be seen in our eastern traversing areas, at first it was just the odd brief sighting as he wasn't very relaxed but as time has gone by the sightings have become more and more frequent and the male began to become less skittish in the presence  of our game drive vehicles. It appears that the male has moved in from the north eastern parts of the Timbavati where there were reports of him being seen in that area, but being a young male he was more than likely forced south by bigger dominant males. We did know of a large male that dominated our eastern areas but due to the vast wilderness areas that adjoin our reserve in that area he was shy and never seen, the only signs of his presence were his tracks and the odd kill stashed in a tree. However it seems that he has disappeared leaving an area of prime leopard habitat void of any dominant male. It seems this new male leopard has stumbled upon a leopard gold mine that is his for the taking and he is quickly making it his own.

As I mentioned earlier, this male leopard is very easy to identify. Firstly by his size, as over the last few months he has really bulked up and become a large individual and secondly by his characteristic lower canine that protrudes from his mouth, it is because of his toothy grin that he has been given the name "Mazinyo" which means "teeth" in Shangaan.

We recently had an amazing sighting of the Mazinyo male as he lay up in the branches of a Marula tree and it was in this sighting that we realized how relaxed this leopard has actually become as he paid absolutely not attention to us, a far cry from the brief sightings we had of this male a short few months ago. One can clearly see his bull dog appearance resulting from his protruding canine tooth that adds a bit of character to this already impressive leopard.

Male leopards have vast territories and as a result are seen less frequently than the females. As can be seen on the above map, this male has a large territory on our traversing area, add to that the areas that we don't drive to the north and the east. So we can and will go weeks without seeing the Mazinyo male as he patrols his piece of the Timbavati, we did manage to catch up with him again a few nights ago and found him once again up in a tree, he then descended and began to mark territory and seemed to be on a bit of a mission doing so, this is another sign that he is establishing himself in the area, it was also a chance for us to get a good look at him as he walked and although being young this male is huge and will only get bigger as time goes by. Male leopards differ from females in that they bulk up a lot more, especially around the head, neck and fore legs to put it in perspective a big female will weigh around 40kgs and a large male on the other hand can reach up to 100kgs. Mazinyo is developing the dew lap that all mature male leopards have which is extra muscle that hangs from the neck giving the leopard a bigger appearance and also protects the leopards neck from injury when fighting off rivals.

Interesting times lie ahead as we see how Mazinyo establishes himself, its never smooth sailing for a male leopard, to his west there is another large male as well as to the north, but his turf that he currently has does not lack in the prey department, and there is no shortage of females for him to mate with, time will tell whether he makes it successfully as a dominant male but as it currently stands he looks set for glory and we are excited to finally have a nice big relaxed male in the area and all the sightings that come with it.