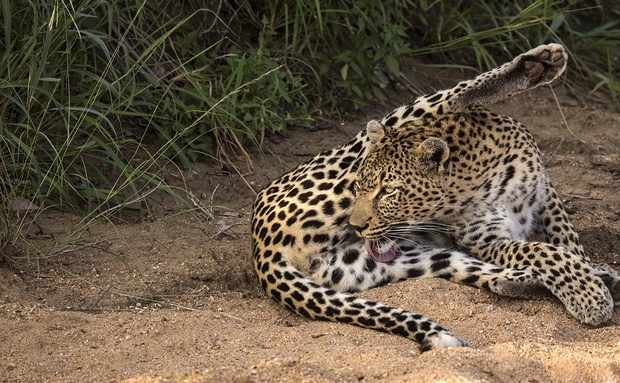 The big news regarding Marula is that she has finally had cubs, they were seen on one occasion on a morning drive and it looks like we have two new additions to the leopard population. We are giving her some space as the cubs are apparently still very young and when the time is right she will allow us to get some good viewing of the little family. Lets hope that Marula will be able to get these cubs passed the first crucial months, she is a successful hunter and seems to be doing a good job of spending time with the cubs as we haven't had many sightings of her, meaning that she is with the cubs at the den site.

Marula mating with a new male in the area, this was more than likely when these cubs were conceived so it is going to be amazing to watch the cubs grow after seeing the whole process from the very beginning.

We have been seeing a lot of the grand old lady of the Timbavati, she has been spending time in the southern reaches of her territory which means that most of her time has been spent within our traversing area. Being so relaxed around our vehicles the quality of sightings that we have had is amazing. One sighting that really stands out was a couple of days ago she was found with an impala kill, we made our way in to view her but only found 4 hyenas around the base of the tree that she had stashed the kill in, no sign of her. Knowing that she couldn't be too far we decided to sit and wait it out in the hopes that she would return to the kill if the hyenas moved off. after being there for a good 20mins another hyena arrived on the scene which sparked a lot of excitement among the other individuals and they all started chuckling as they rushed to greet the new arrival, at that moment we noticed a blurred movement some distance away, it was Nthombi and she had leaped into the branches of a nearby tree to get a better view of what the hyenas were doing. We drove up to where the leopardess was, and managed to take full advantage of the beautiful photo opportunity she had given us before she made her way down the tree and into a thicket deciding that the hyenas were still too close to her kill to make a run for it.

We have been seeing a lot of Nyeleti of late, she is proving to be as successful as her mother when it comes to hunting as majority of the times we find her on a kill, and seems to be fitting in well as an independent leopard, her core territory still falls within Umlani's property however on the odd occasion she ventures more north and out of our traversing area. Last week we found her sleeping off an impala meal before finishing off the scraps before leaving the scene, we followed her in the hopes that she would go to drink water and that is exactly what she did. Now its a pretty special sighting in any case to see a leopard drinking, firstly they are not water dependent animals and usually get the moisture they need from their kills and secondly the scene itself is magnificent, their rosetted coat reflecting in the pool they drinking from is almost magic.  So to say the photos we were getting in this sighting were phenomenal was an understatement, little did we know the sighting was about to get even better when a sneaky terrapin decided the leopards tongue was a target for a meal, and every time the cats tongue lapped at the waters surface the terrapin would take a bite at it, watching the leopards reaction to the terrapin was pure gold as she went from shock to attack modes in the blink of an eye, it was a remarkable moment that you don't often get to see and surely something that will remain in our minds forever.

A couple of nights ago we found Nyeleti with yet another impala kill, unfortunately for her she wasn't able to hoist the kill into a tree and hyenas stole it from her, all she could do was watch the scavengers feed off her hard earned meal from the branches of a tree, this however meant yet another spectacular view for us of this beautiful leopard.

The good thing about the female leopards is that they have much smaller concentrated territories so we get to see them a lot  more than the far roaming males, its going to be interesting to see over the next few weeks how things play out with the leopards of Umlani, both Nthombi and Nyeleti should be seeking out males to mate with and then of course we await Marula and any sightings we may get of her cubs. One thing is for sure...we will keep you posted!