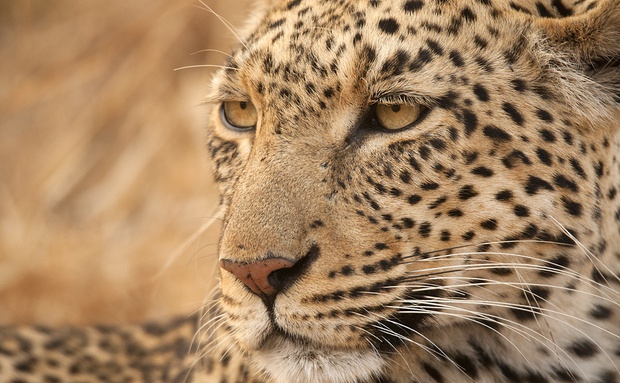 MANY PEOPLE READING THE TITLE OF THIS BLOG WILL THINK THAT ANY LEOPARD SIGHTING IS PERFECT, AND FOR THE MOST PART I TEND TO AGREE. HOWEVER, EVERY NOW AND THEN A LEOPARD SIGHTING IS EXTRA SPECIAL. IN THE CASE OF THE SIGHTING WE HAD RECENTLY I HONESTLY BELIEVE IT COULD NOT HAVE BEEN MORE PERFECT. IT HAD A LITTLE BIT OF EVERYTHING AND PROBABLY SOME MORE. STARS ALIGNED, LUCK WAS ON OUR SIDE AND TIMING WAS EVERYTHING. HERE IS MY ACCOUNT OF THIS INCREDIBLE ENCOUNTER WE HAD WITH THREE VERY SPECIAL LEOPARDS THAT CALL THE TIMBAVATI HOME.

A couple of evenings ago, the radio crackled with the call that Marula female had been found with a very fresh kill that she had just made moments before being found. This is always exciting news as it generally means there will be some guaranteed leopard sightings for the next few days. What makes it even more exciting is that once she stashes the kill out of the reaches of the pesky hyena clan that are a constant presence these days, she will go and fetch her two cubs. So that is already amazing, three leopards in the same place...not an every day occurrence given that leopards are solitary cats.

I decided to respond to the sighting as my guests were big time leopard fans and well this opportunity was just too good to resist. But everyone had the same idea, light was fading and Marula had headed off to go and fetch the cubs, I could hear by the radio chatter that she was in and out of thick bush, always on the move and it was generally quite a task for the guys to keep up with her. But still we pushed on.

I then got a call from one of the other guides who's landowner was out on drive and had stumbled across another leopard who was up in a tree with a kill and some hyena keeping it there as they waited patiently for scraps to fall. I decided to rather leave the tough Marula sighting until the following morning when she would have the cubs at the kill and headed off for this other leopard sighting as it sounded very much worth it. On arrival at the scene, there was no sign of the leopard, I could see the impala kill in a small tree and the two hyenas skulking around in the vicinity, but no leopard...my plan seemed to not have been worth it. As my shoulders slumped and I started making my way back to the road there was a blur of rosettes just in front of us as the leopard bolted from its cover, a skittish young male. Happy with the brief glimpse that all was not lost we decided to go for drinks and return after dark to see if the leopard was a bit more relaxed in our presence.

To cut a long story short, when we returned the young male was back up in the tree feeding and we had a really nice sighting of him as he snarled, growl and hissed at the hyenas beneath him. It really ended up being an incredible sighting thanks to the interaction between the two species. The guests passed the comment " We don't know how you are going to top this tomorrow, this was unbelievable", in the back of my mind all I could think of was the potential glory that we could have in the morning when we see Marula and her cubs with their kill. I made no promises to the guests, I merely smiled...a hopeful smile as one thing I know, there are no guarantees when out on safari but it was a smile nonetheless. 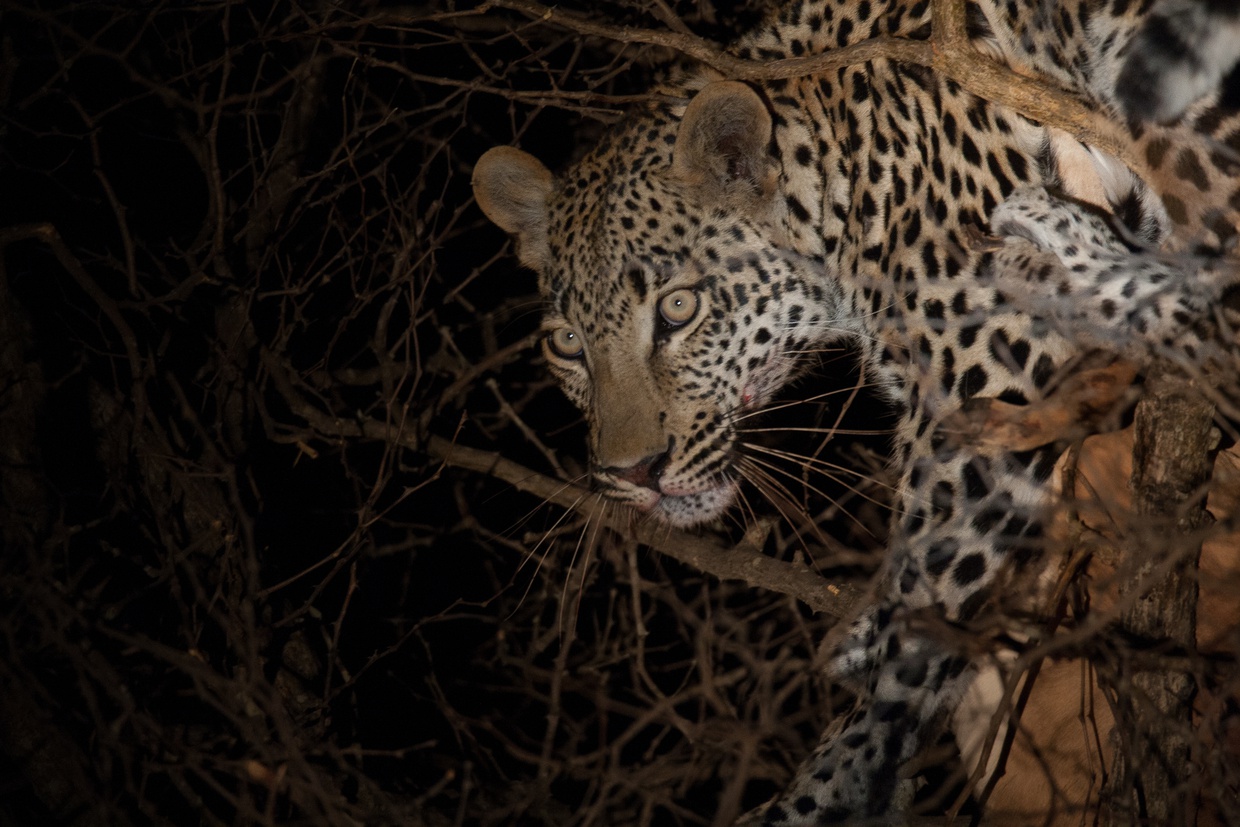 When we set out on drive the following morning we headed straight in the direction of where Marula had hidden her kill, I was filled with hope but also was a bit nervous that the kill might have been stolen by hyenas during the night or while she was away fetching the cubs, I have seen this happen all too often in the past. So when the radio call from one of the other guides came through that he had relocated her in the same position with the cubs AND her kill I was over the moon and we made our way at a slightly quicker pace.

Arriving at the sighting we saw Marulas young male cub lying on the bank of the a large dry river bed, about 30m away we could see his mom doing the same. We sat with the young male for some time as he watched us watching him. we managed to get a good few photos before Marula got up and headed over to him, the two leopards had a bit of a cuddle and then the young female cub appeared and joined the leopard pile on. Three leopards all together all in one photo. This however was just the beginning. 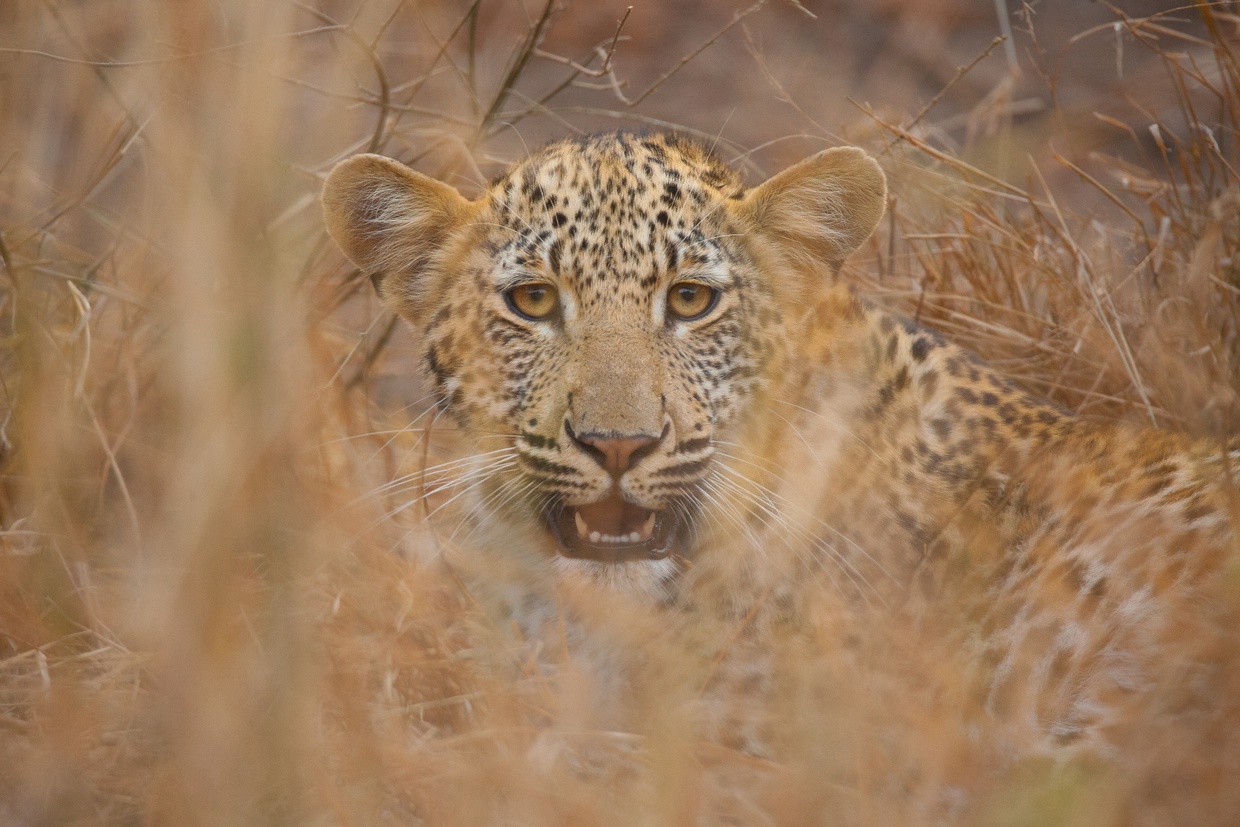 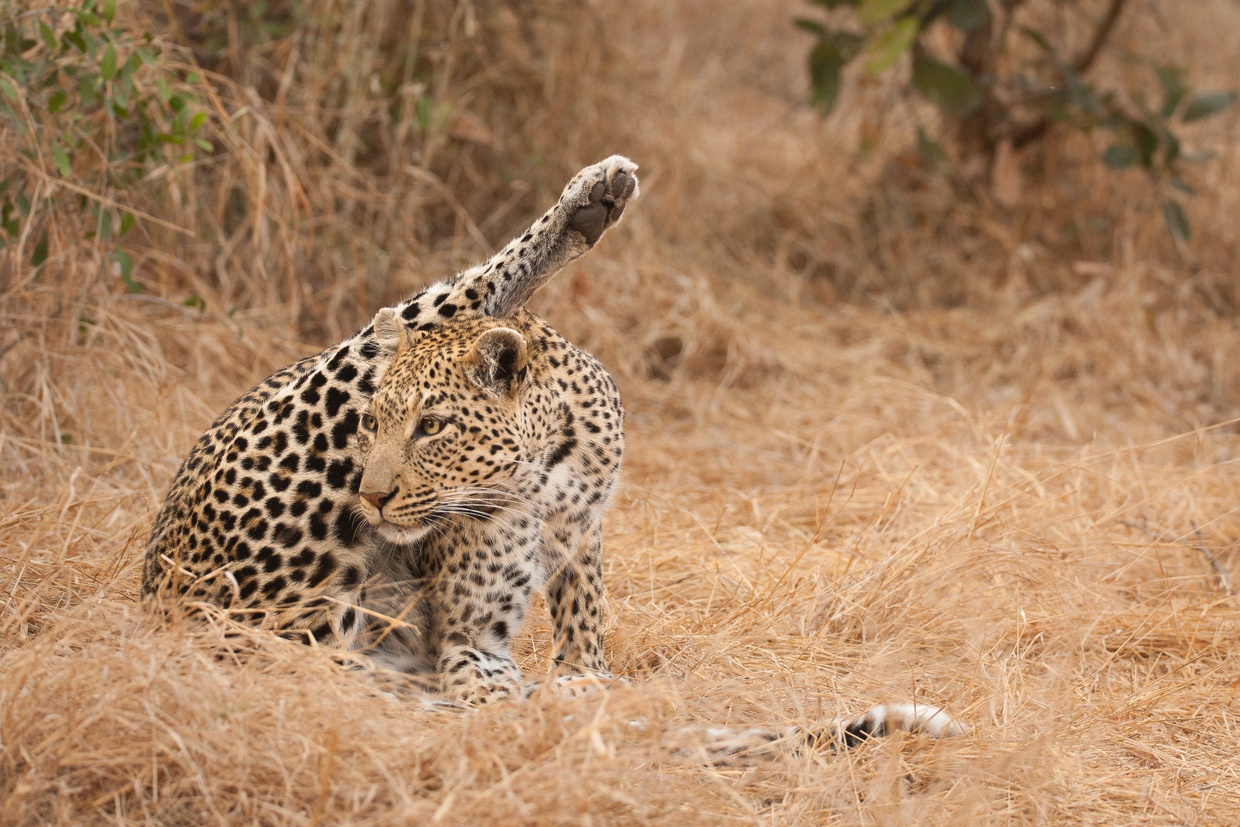 Marula headed up the tree that she had stashed her kill in and was quickly followed by her daughter who jumped into the branches with her mom to feed. The young male however stayed on the ground and moved out onto the river bed sand to soak in the first rays of golden morning sunlight almost posing for his photograph to be taken. 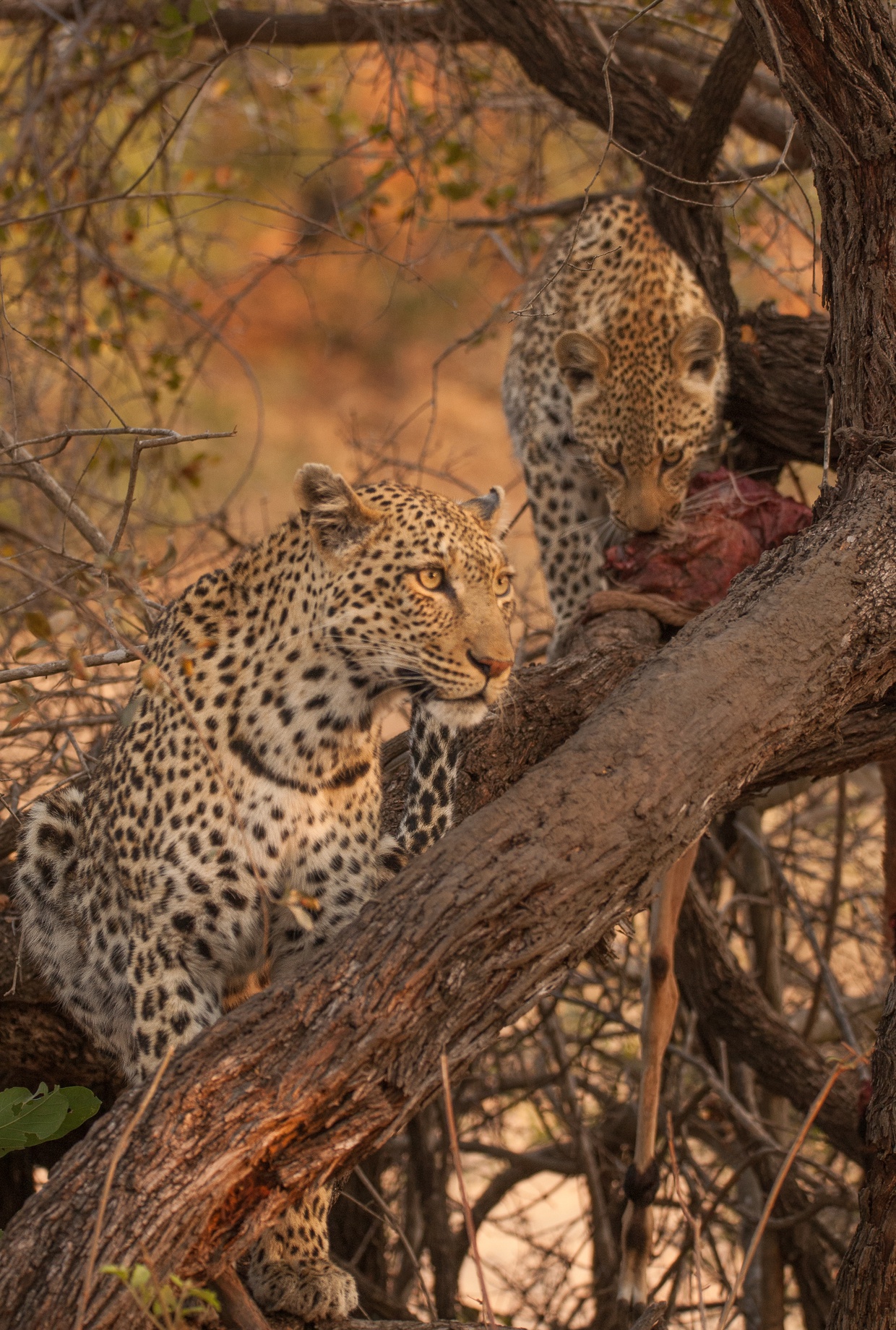 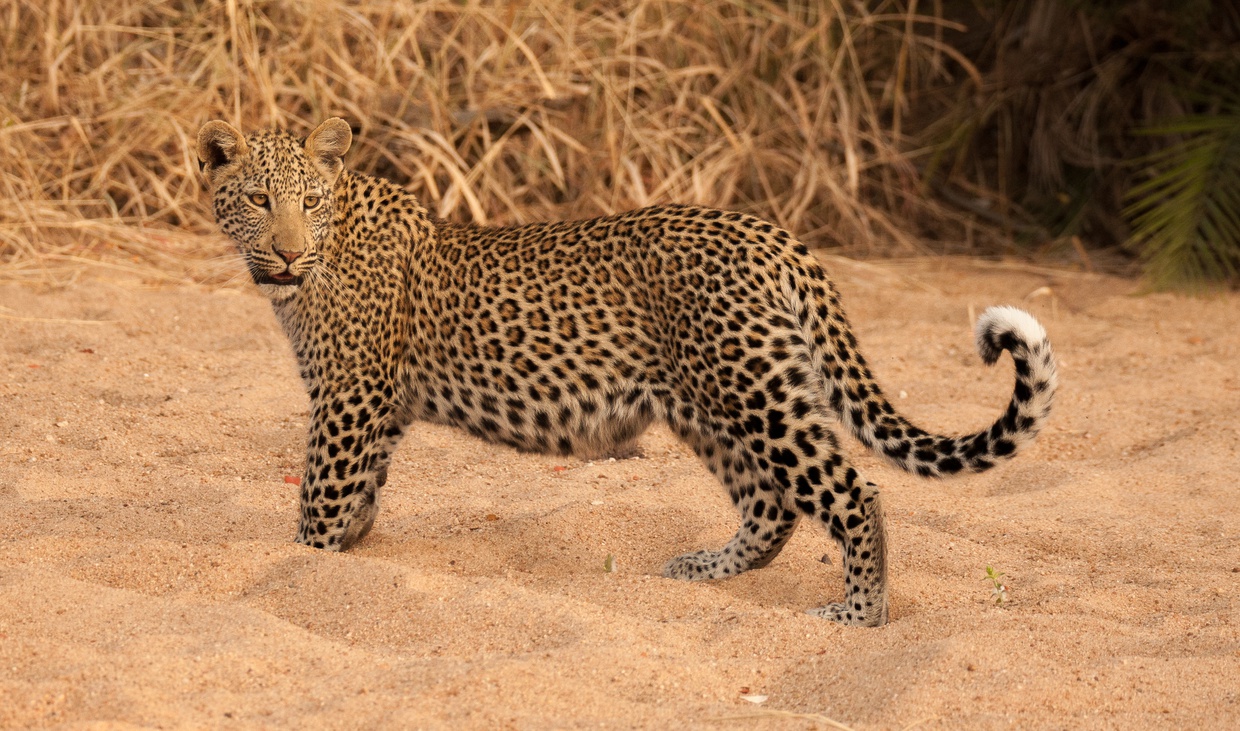 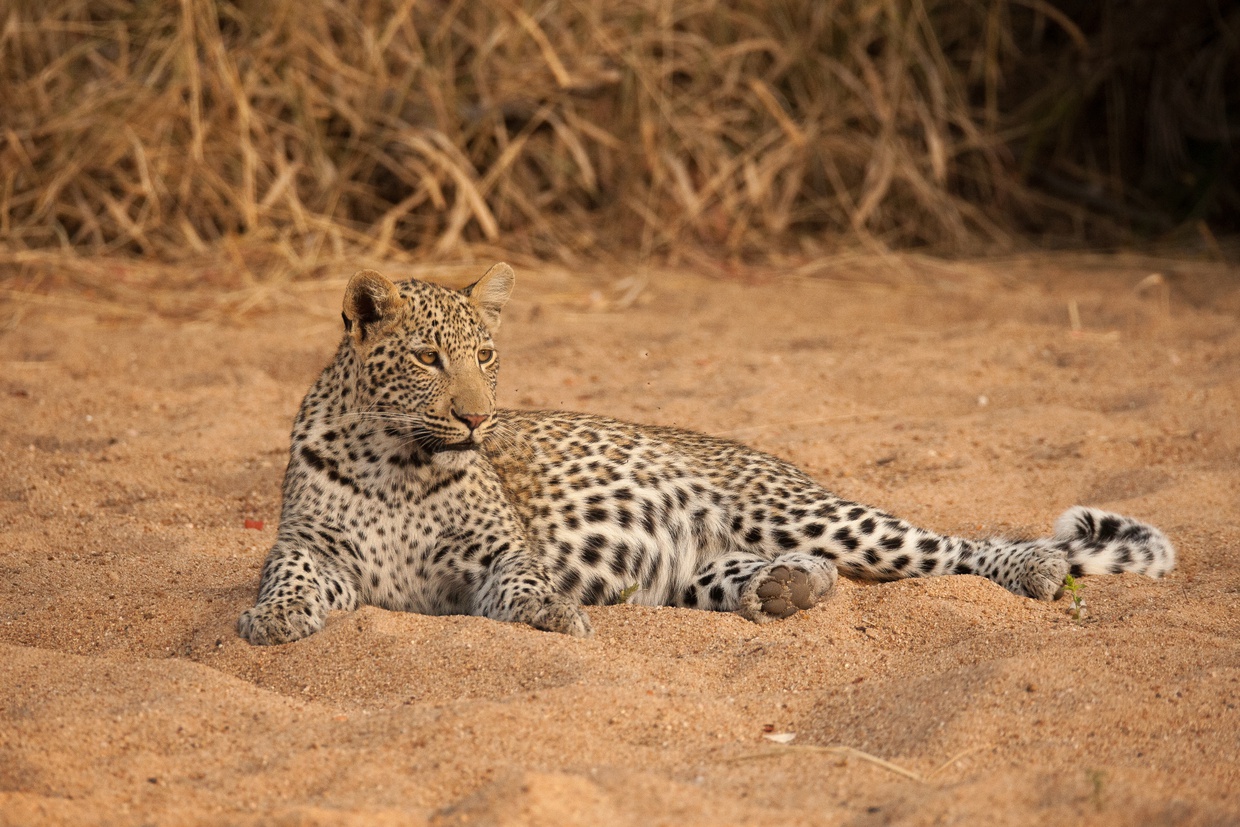 What happened next was just the cherry on top to complete an already incredible sighting. Marula descended the tree and started making her way towards her son out in the river, he immediately flattened himself ready to pounce on his mom as she approached. The scene was set open surroundings and stunning light with the anticipation of the action to come. 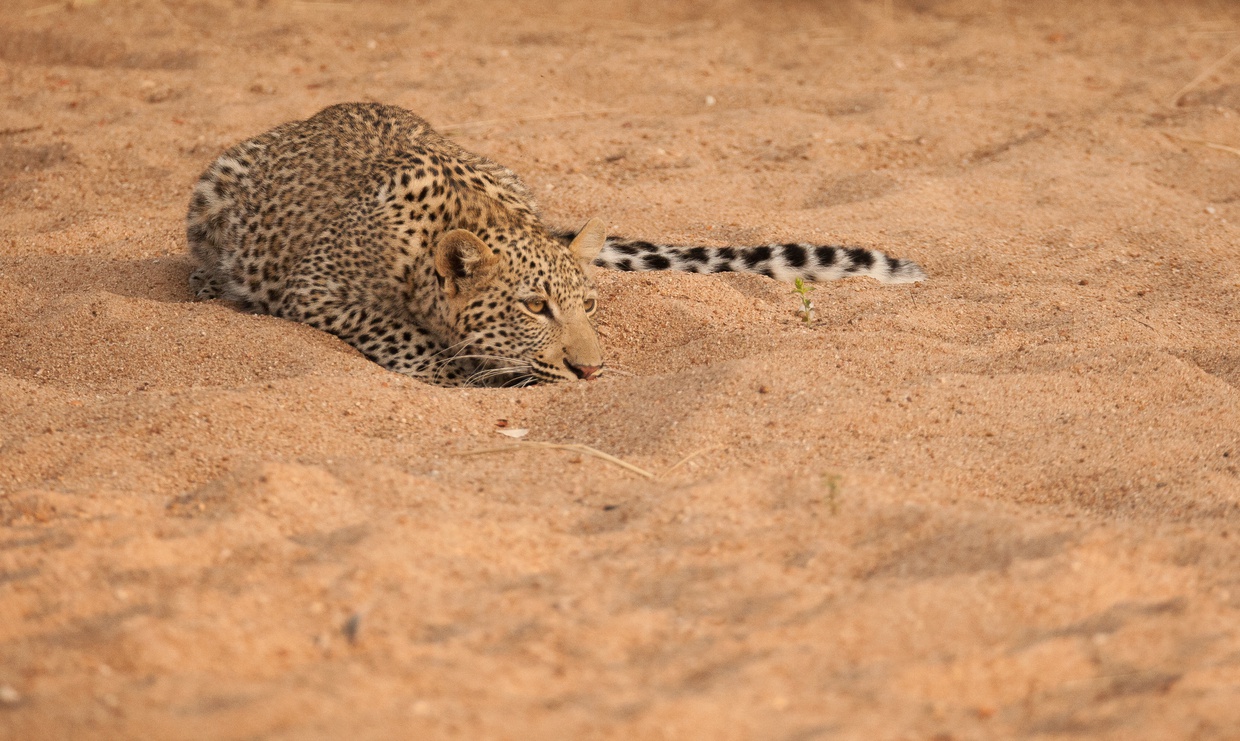 As Marula got a few paces from her son he sprung into action and tackled his mom, Marula saw it coming obviously and leaped into the air but her son was too quick for her and they connected in mid air, with experience on her side the mother leopard quickly turned the tables on her son and flipped him over and pinned him to the ground as they playfully wrestled in the soft sand. 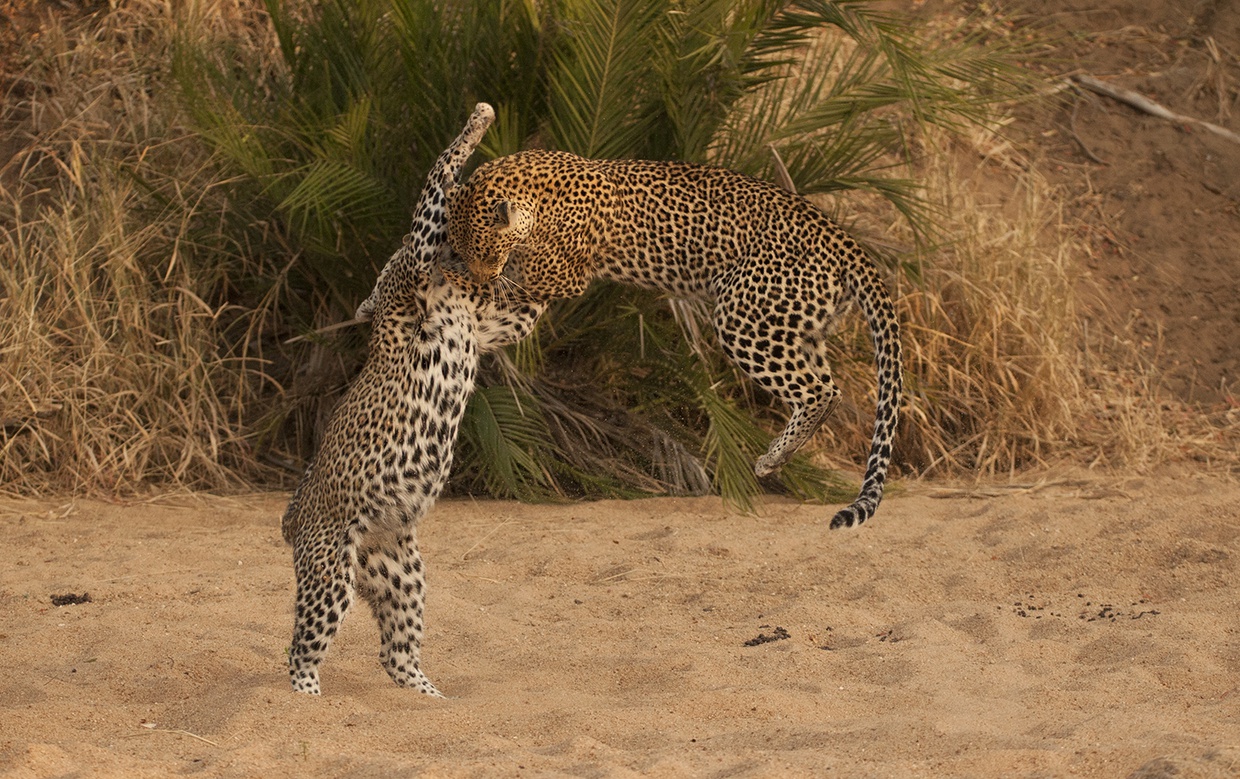 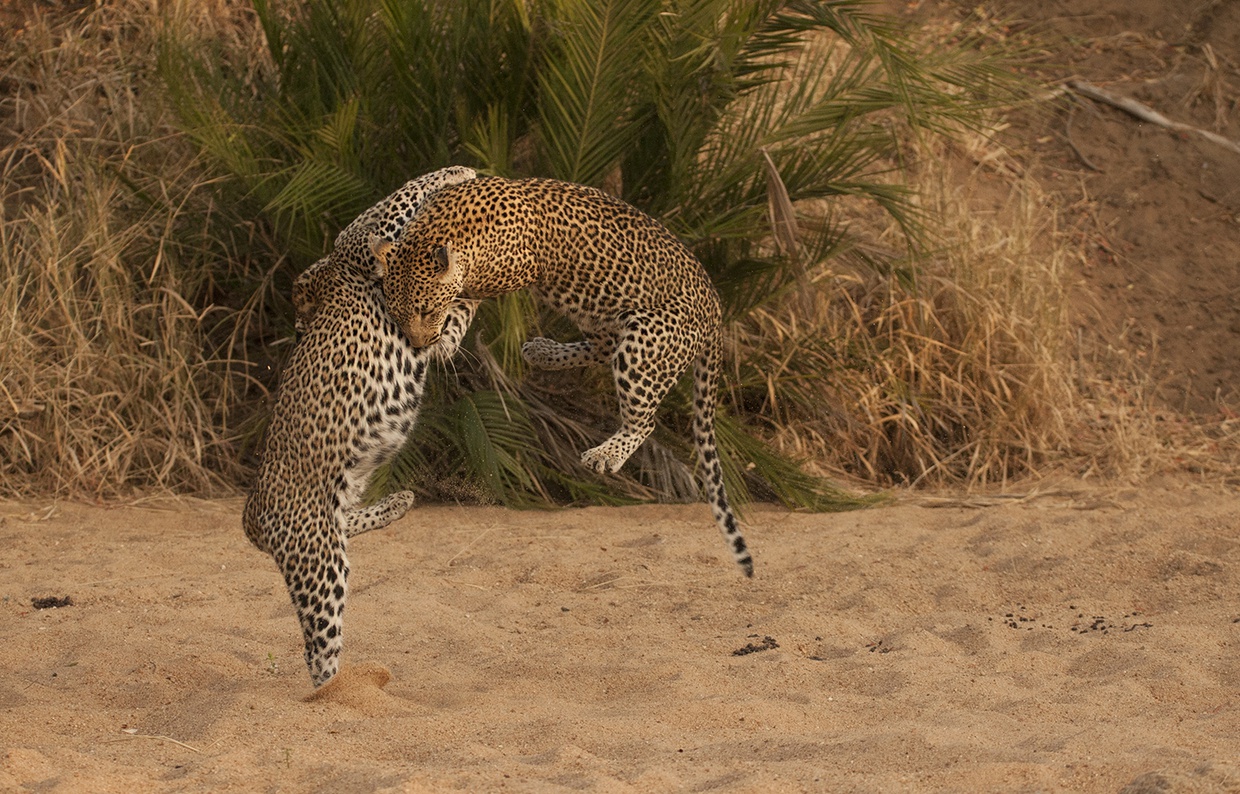 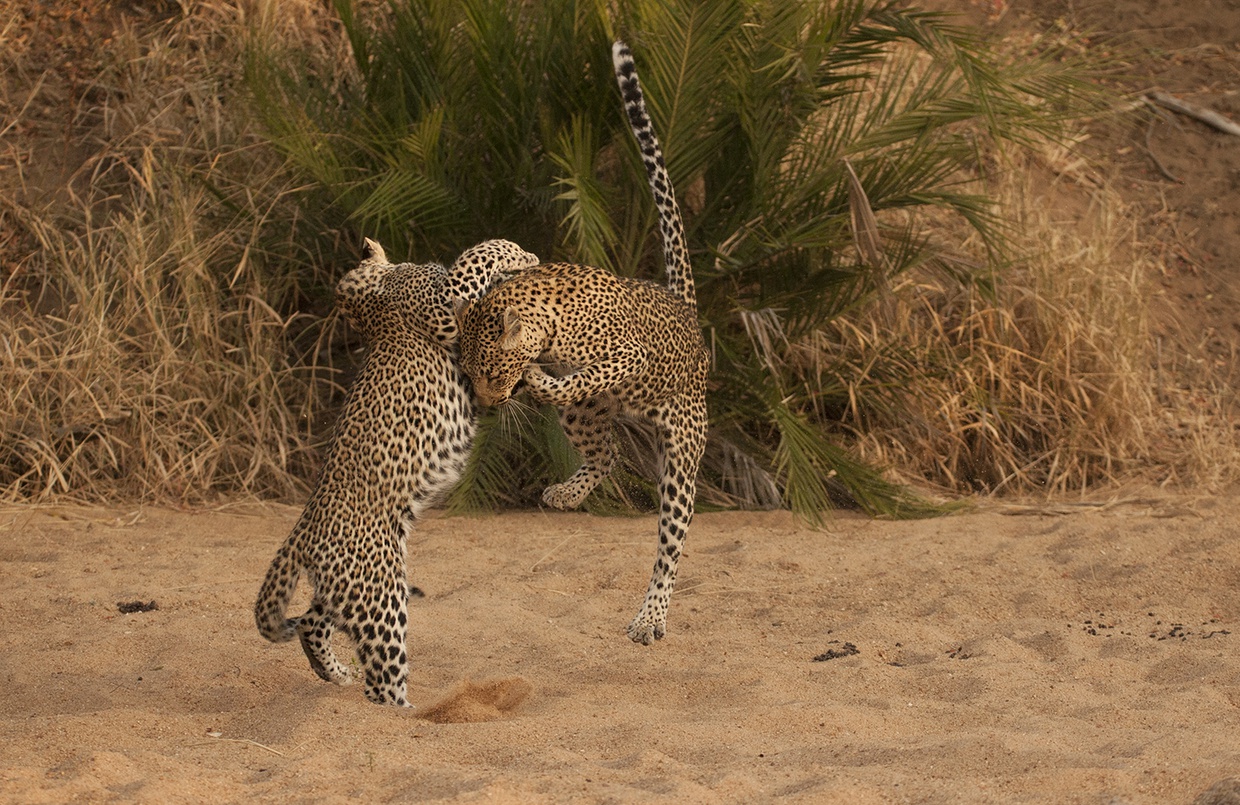 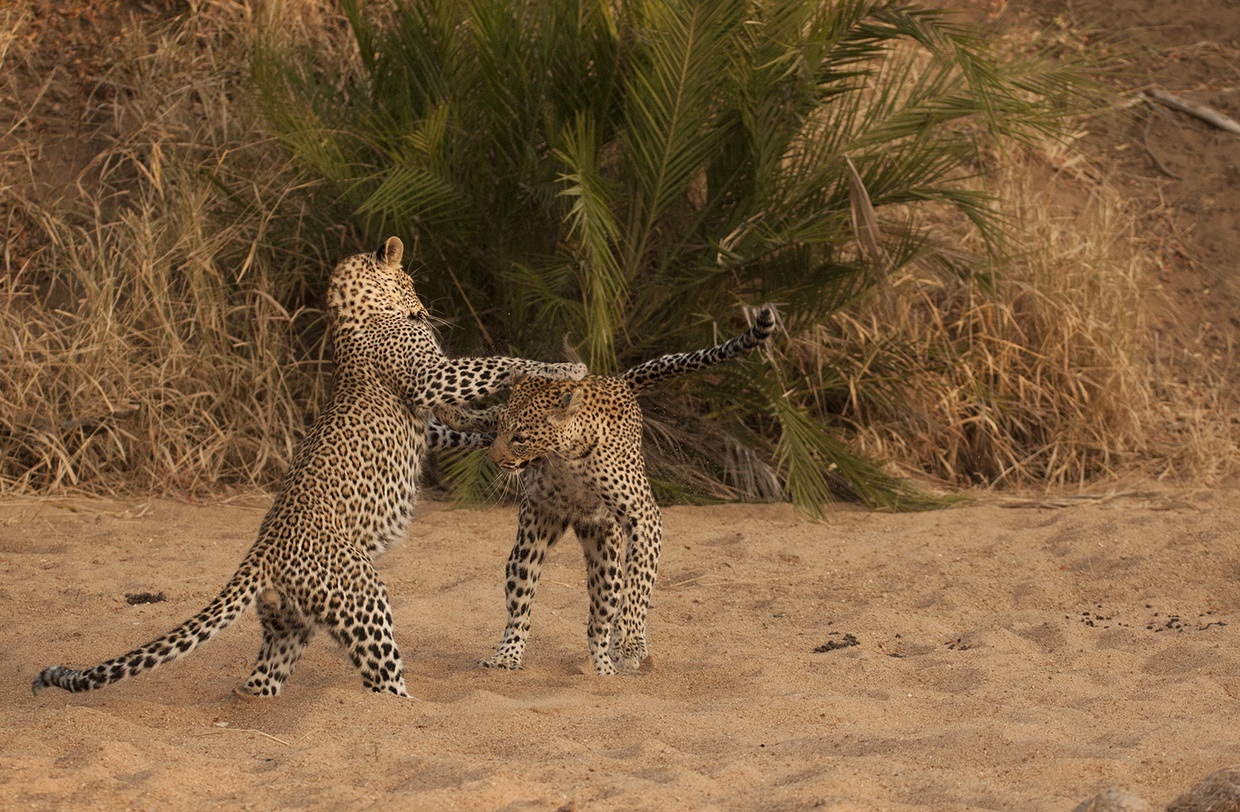 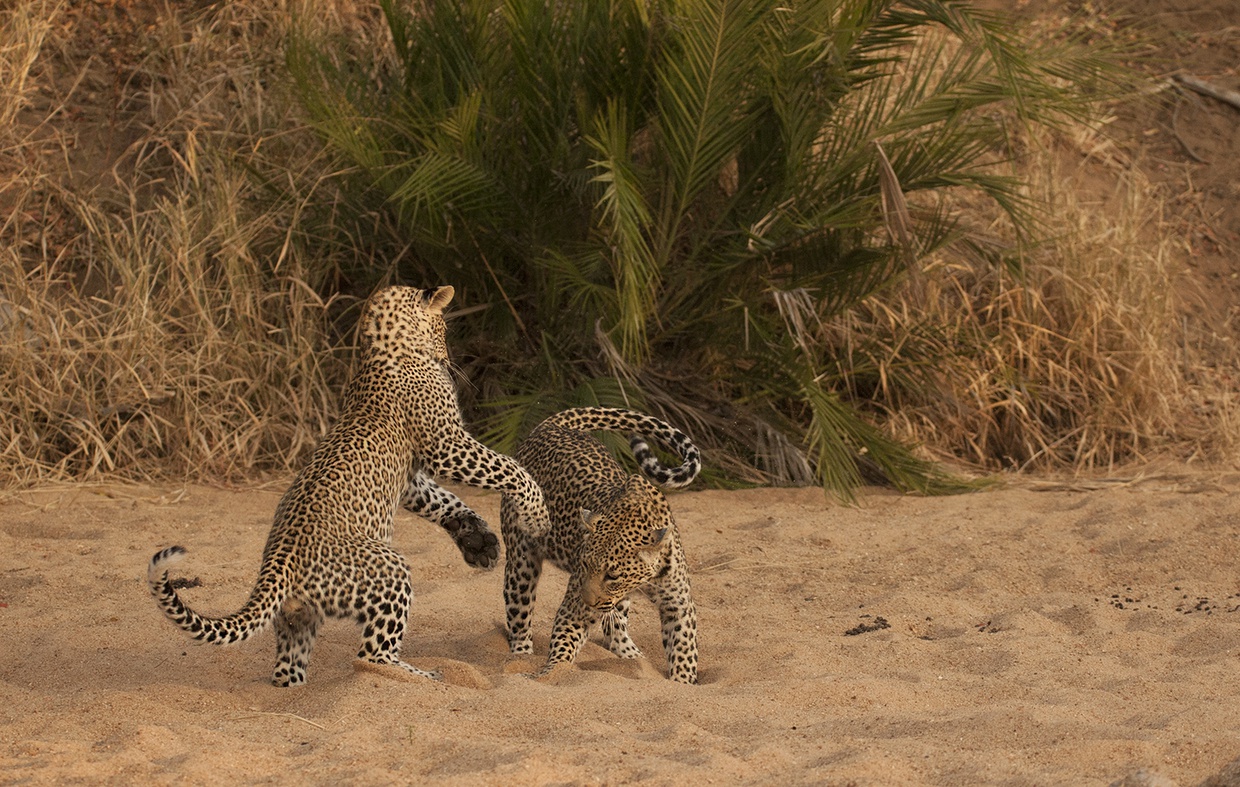 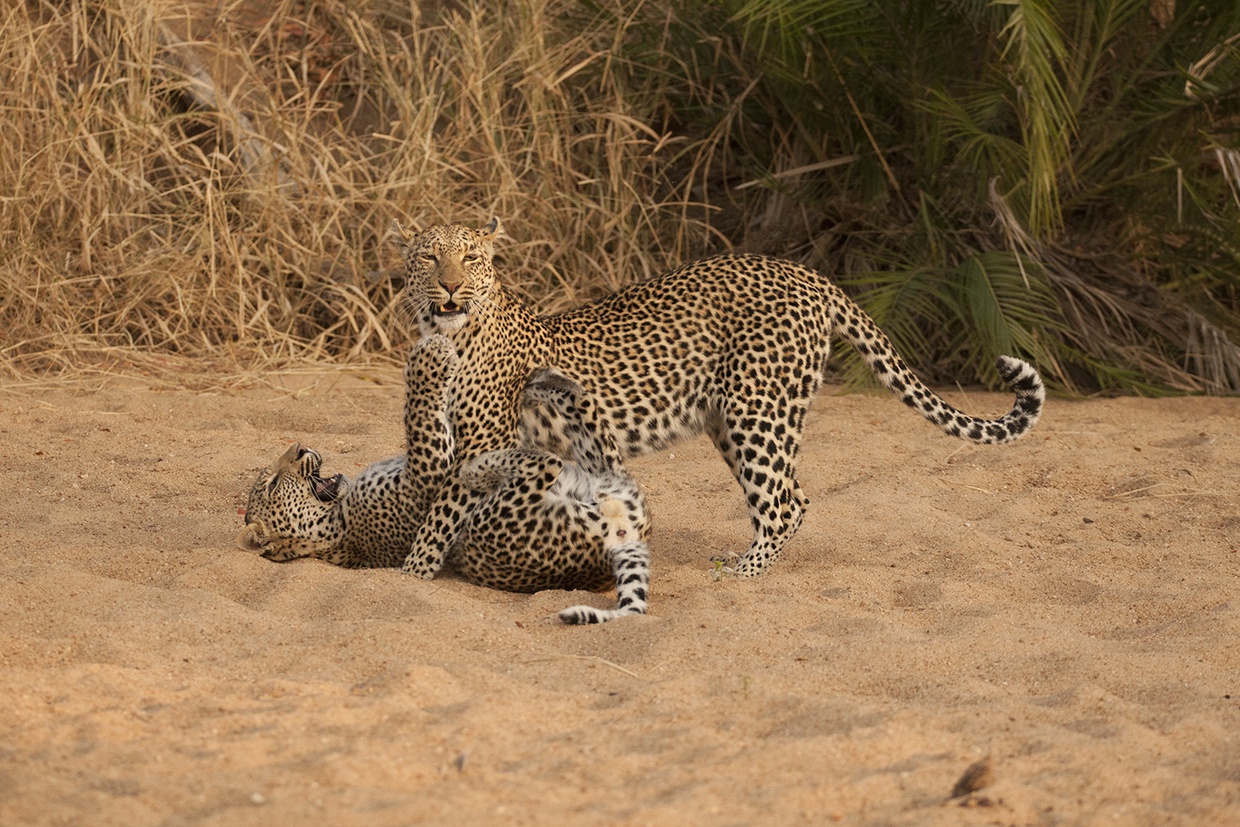 Just when we thought it couldn't get any better, it did just that when the action was too much for the young female cub to resist and she then quickly made her way towards the other two leopards, Marula paused for a moment to watch the advances of her daughter and her son took the moment to free himself from her bear-hug and started stalking his sister, who was doing the exact same, as they two leopards got near enough to one another they both sprang into action tackling each other creating even more magic than the previous wrestling match that we had just witnessed. 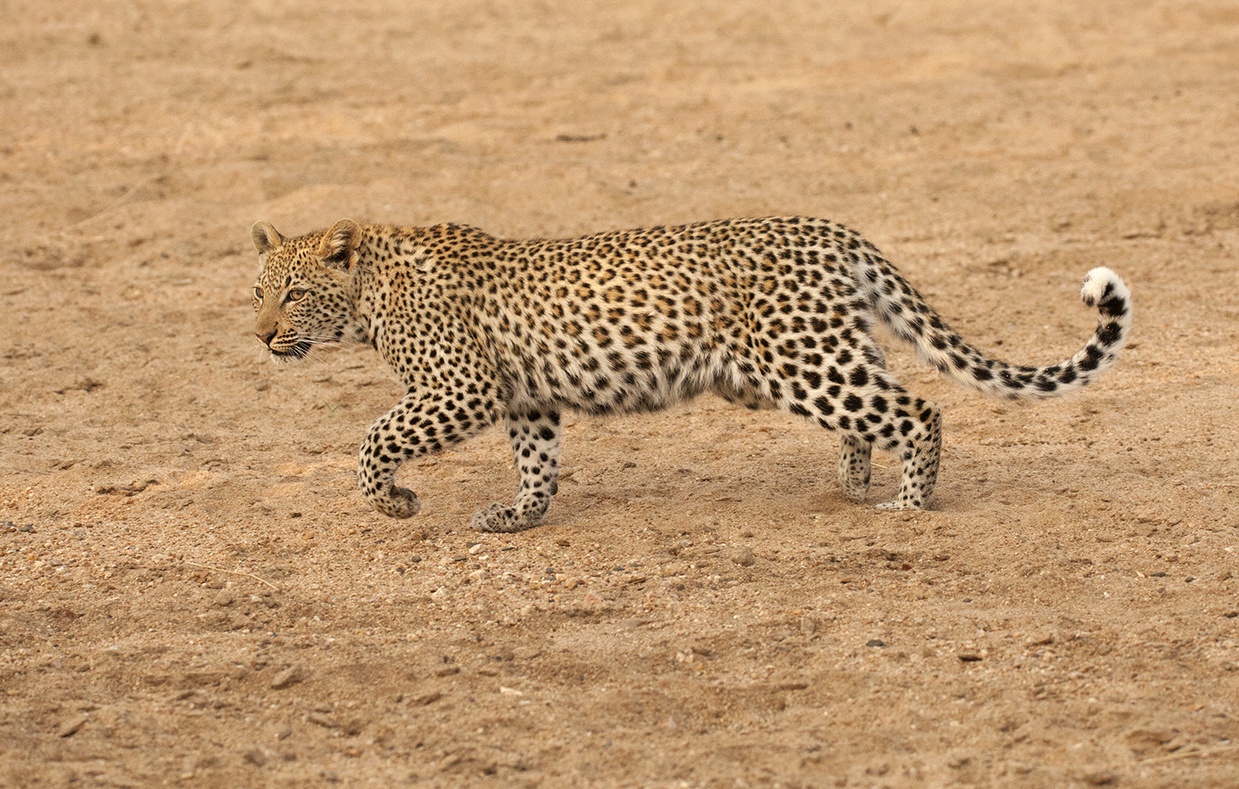 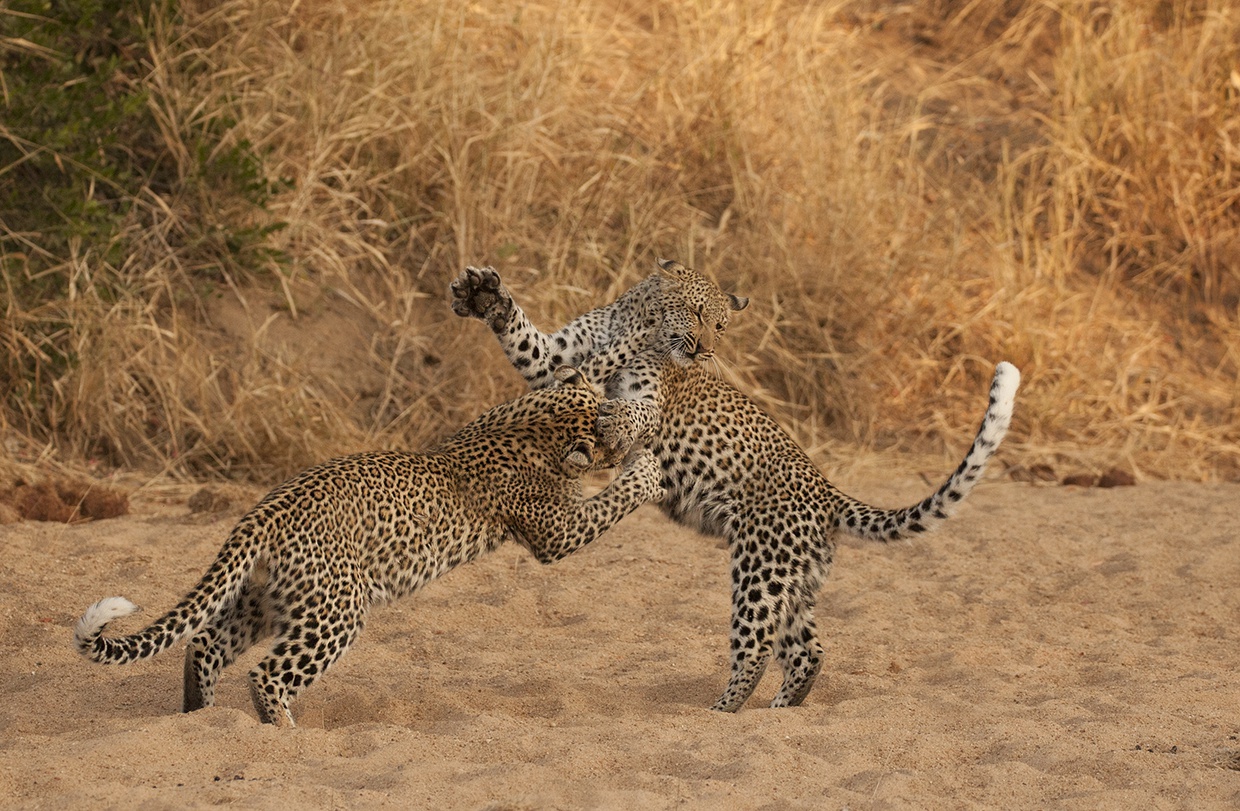 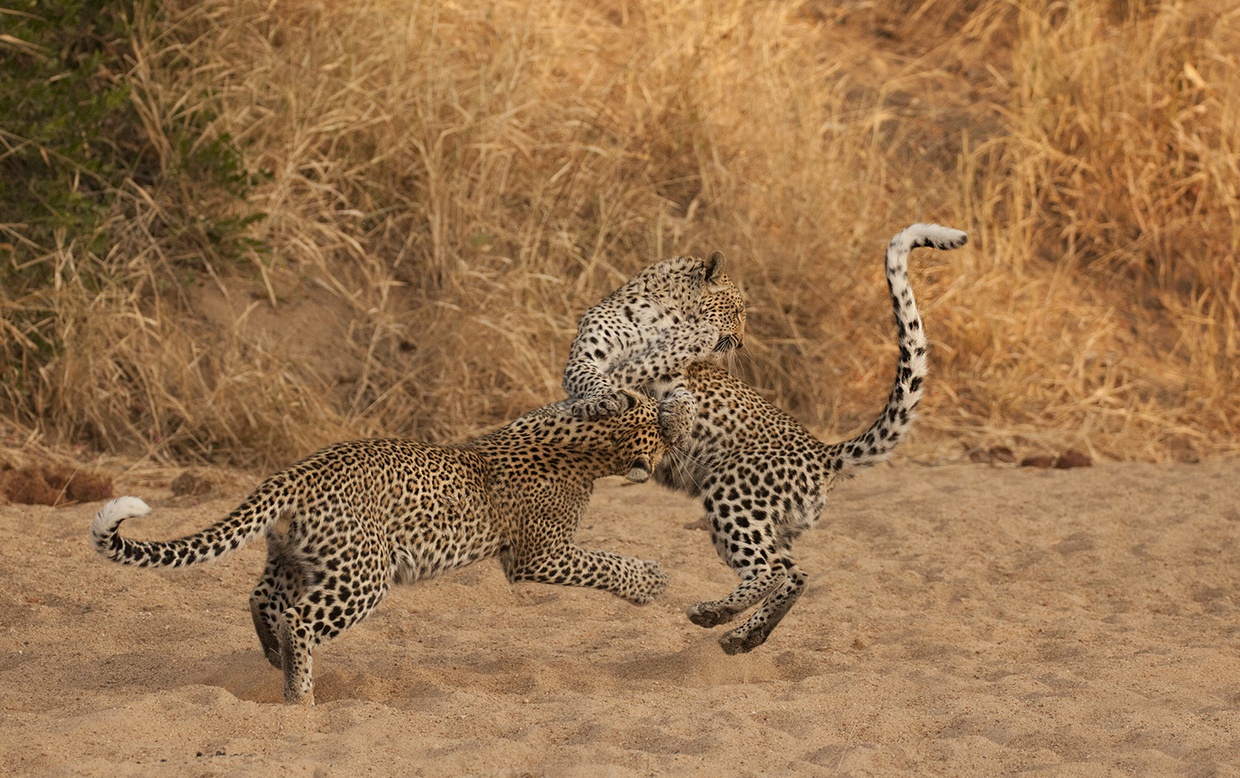 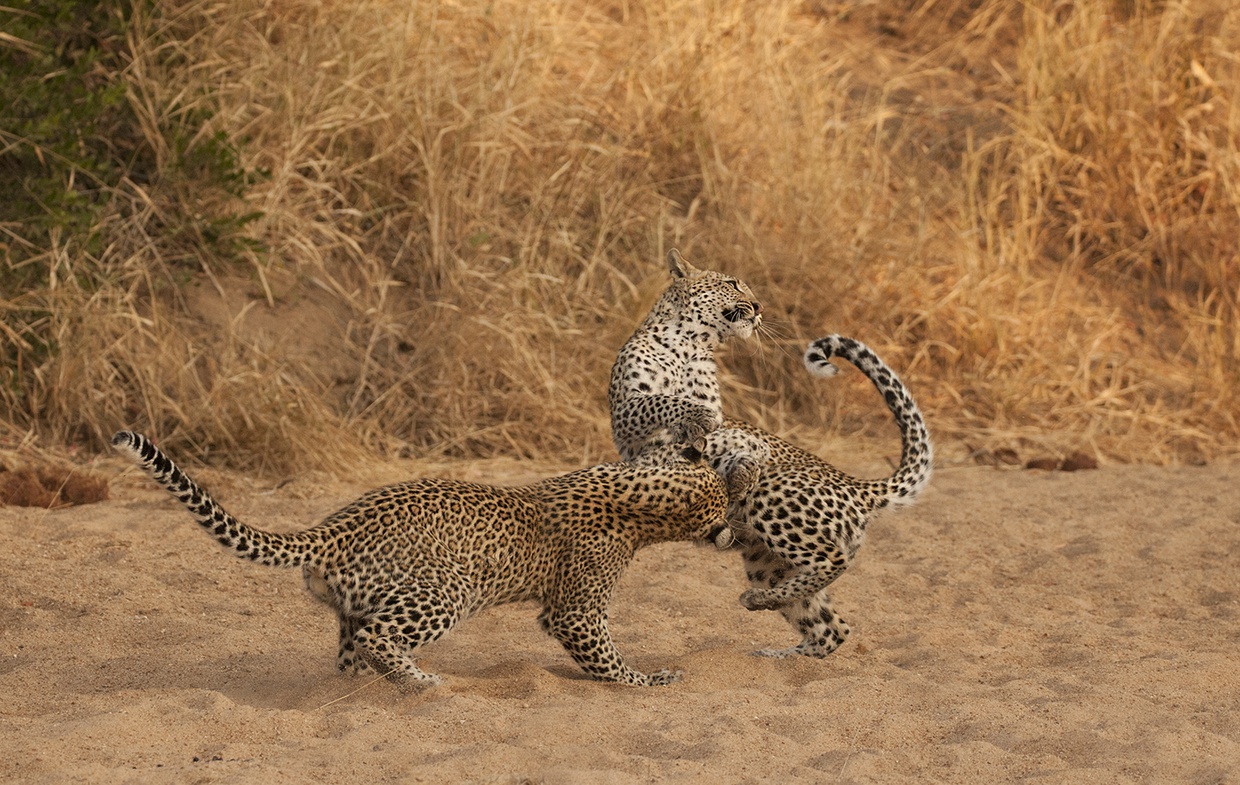 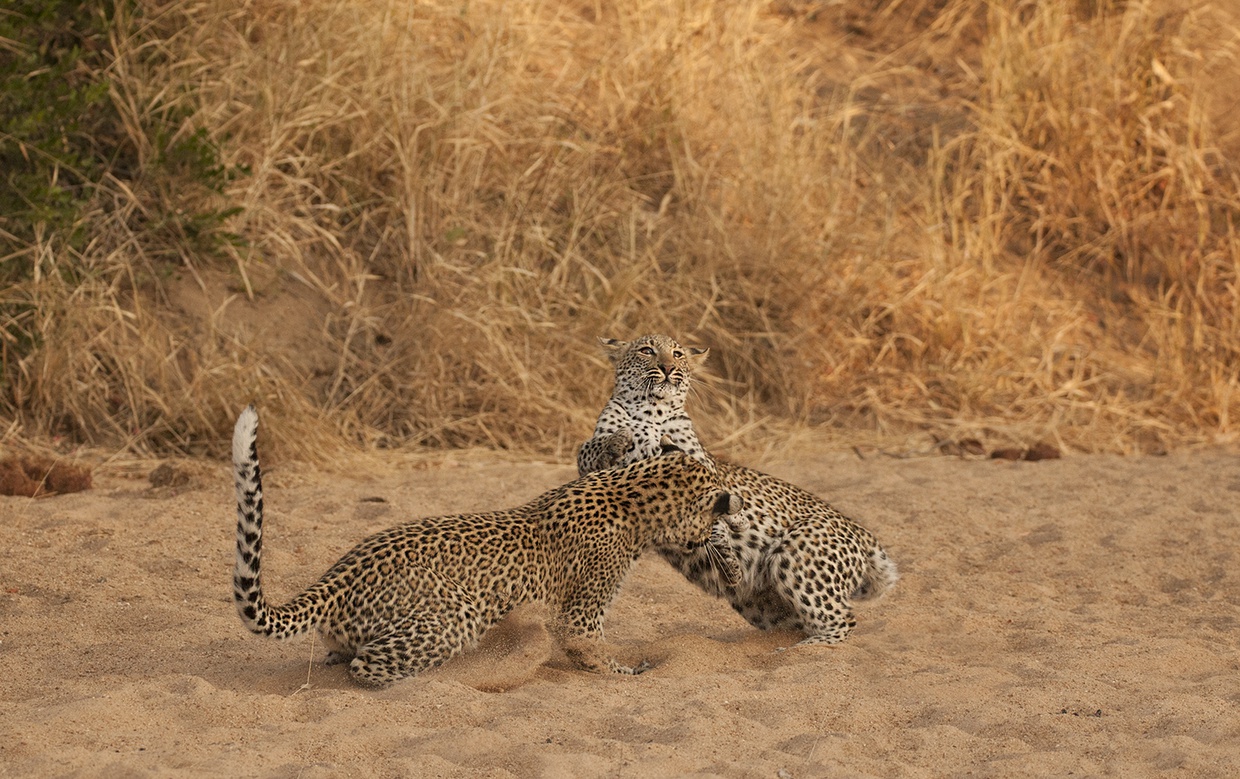 Once all the adrenaline had worn off and the excitement had dwindled among the trio of leopards they all seemed to move off and find their own spot to rest and we took the chance to take a few more last photos of them before heading out for a well earned coffee to celebrate the literal perfect leopard sighting that we had just had. 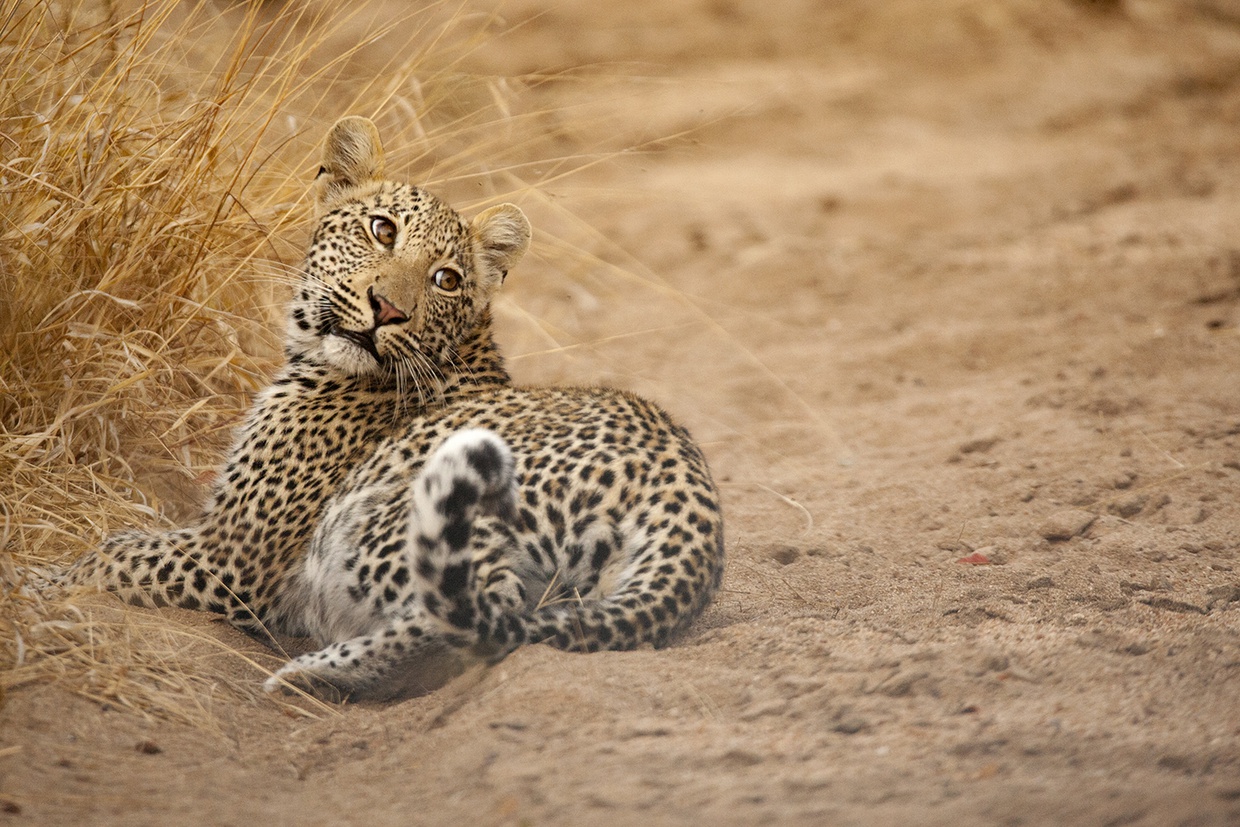 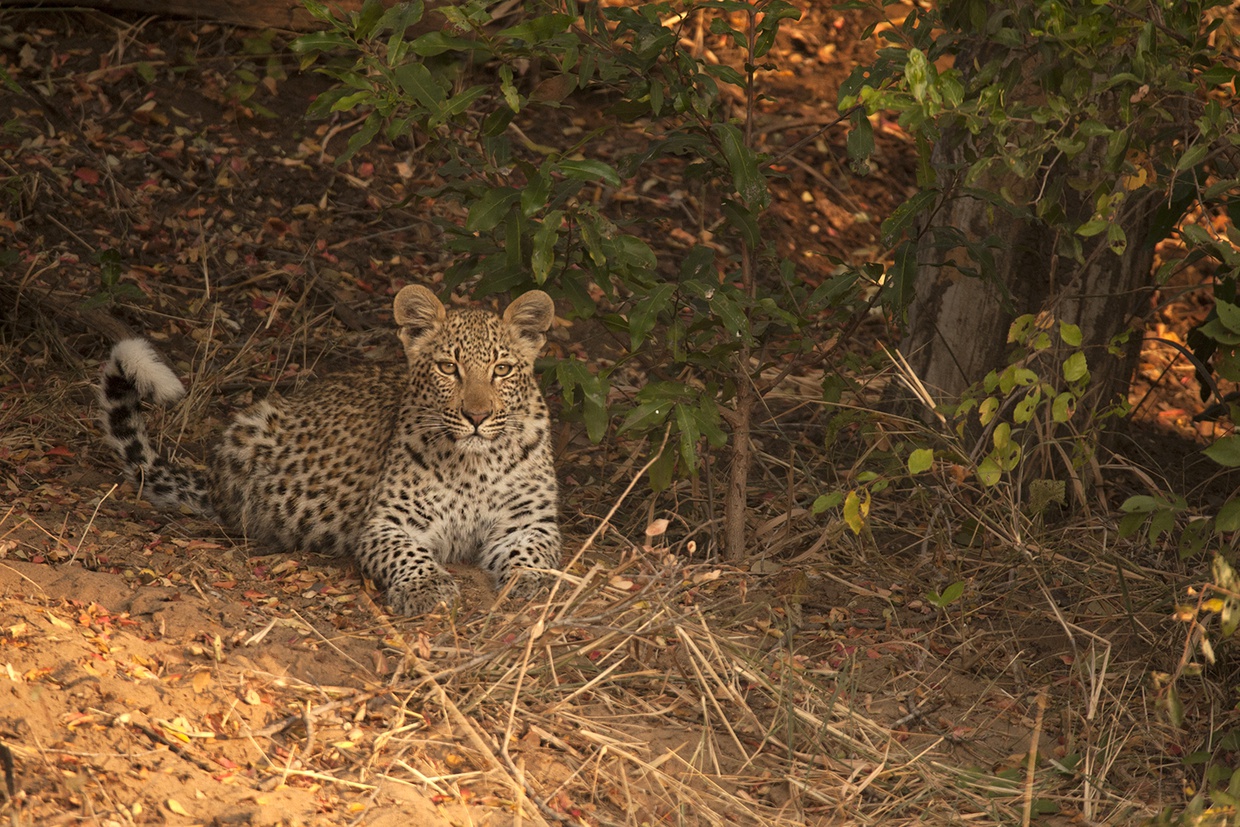 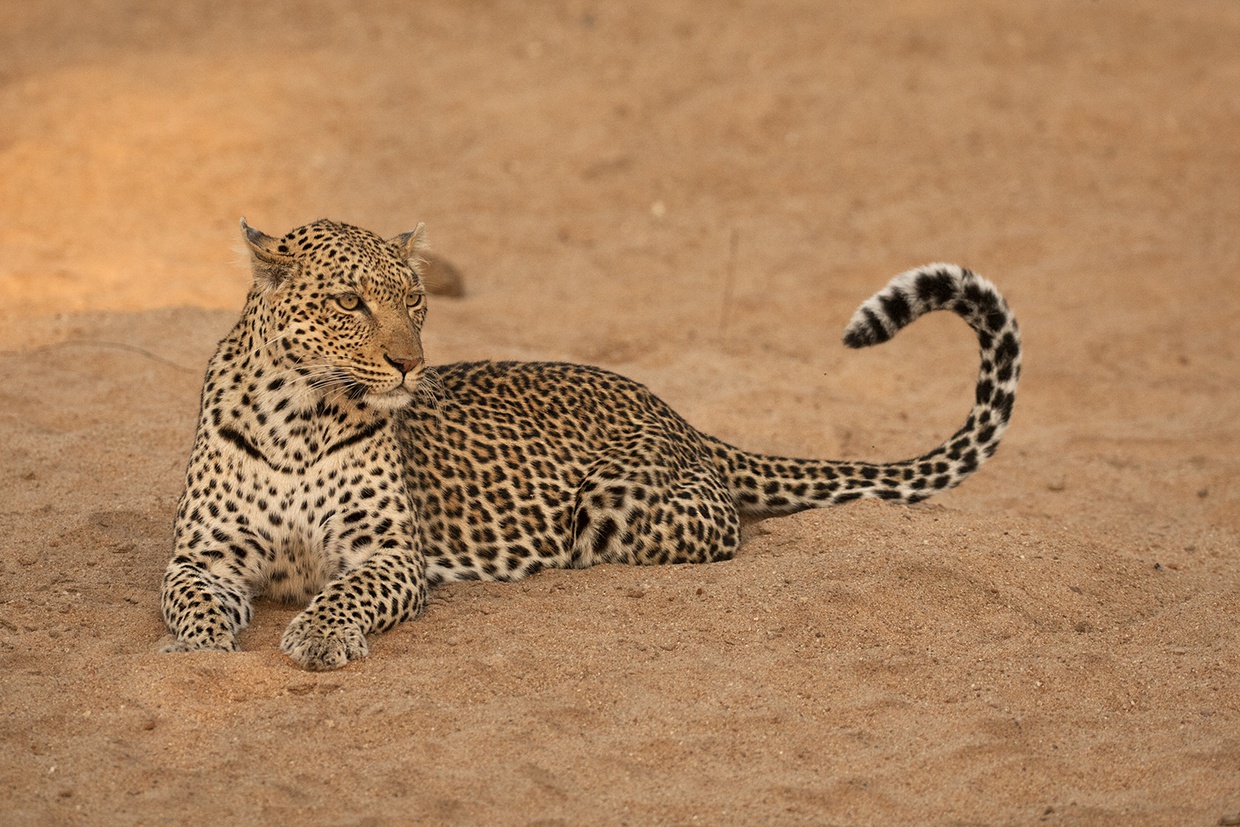 As Marulas cubs grow sightings like this should become more regular as they practice their hunting skills on each other and their mother, but to be lucky enough to have these three incredible leopards on our safari doorstep is just special, and sightings like this one will always remain in our memory banks.